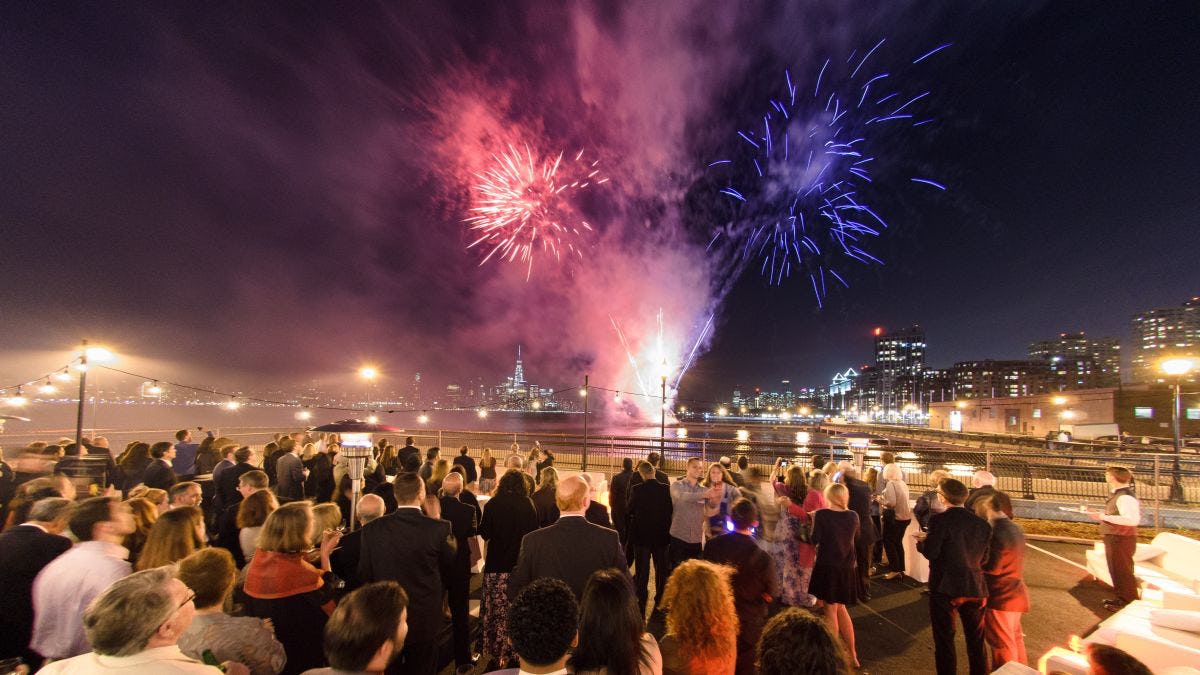 Stevens Institute of Technology’s most ambitious fundraising campaign in history, the $200 million campaign known as The Power of Stevens, has concluded more than $50 million above its original target.

The campaign has supported the creation and renovation of new academic, research and student spaces on campus; increases in the size of the faculty body and the recruitment of exceptional faculty; and numerous new initiatives and programs to empower student success, the university announced today.

"On behalf of the entire university community, and especially the students who will benefit for decades to come, I am profoundly grateful to the thousands of alumni, friends of Stevens, faculty, staff, students, parents and industry partners who contributed their time and resources over the course of this transformative, record-breaking campaign," said Stevens President Nariman Farvardin.

"Their generosity will continue to propel Stevens in the years ahead — providing resources to attract and support the best and brightest students and faculty, and creating a premier, technology-enabled environment for education and research."

The campaign's successful conclusion achieves another key goal of the university's ambitious 2012-2022 strategic plan The Future. Ours to Create. The implementation of this plan strengthened the university's financial profile, increased its endowment, further improved the academic profile of the student body and contributed to a constellation of strategic initiatives that have created a rise in the university's stature.

The campaign's success has also instilled increased pride and a sense of accomplishment in the Stevens community, noted officials.

"This has been a campaign where the entire community has not only raised $200 million, but has truly come together, working closely with each other to help ensure a bright future for Stevens," said Laura Rose, university vice president for development and alumni engagement. "They did so because they want to help fuel the next great advances, because they care about this university community and its tradition, and because they want to make a lasting impact on our campus."

Building momentum — and a rising campus

Even before the fireworks-studded event on the Hudson River in spring 2016 that publicly announced the original $150 million campaign, it was clear there would be broad support for the effort. Ultimately, more than 14,000 donors — members of the Board of Trustees, the President’s Leadership Council, alumni, faculty, staff, students, parents and industry partners — would make more than 45,000 distinct gifts to the campaign.

An early pledge from Stevens trustee Sean Hanlon ’80 and his wife Cathy Hanlon to support the creation of a second state-of-the-art financial systems laboratory for analytics and data visualization signaled the campaign was on the road to success. This second laboratory, completed in 2016, followed the 2012 opening of the Hanlon Financial Systems Center, which had been outfitted with Bloomberg terminals and leading-edge software packages for trading simulation and financial modeling. 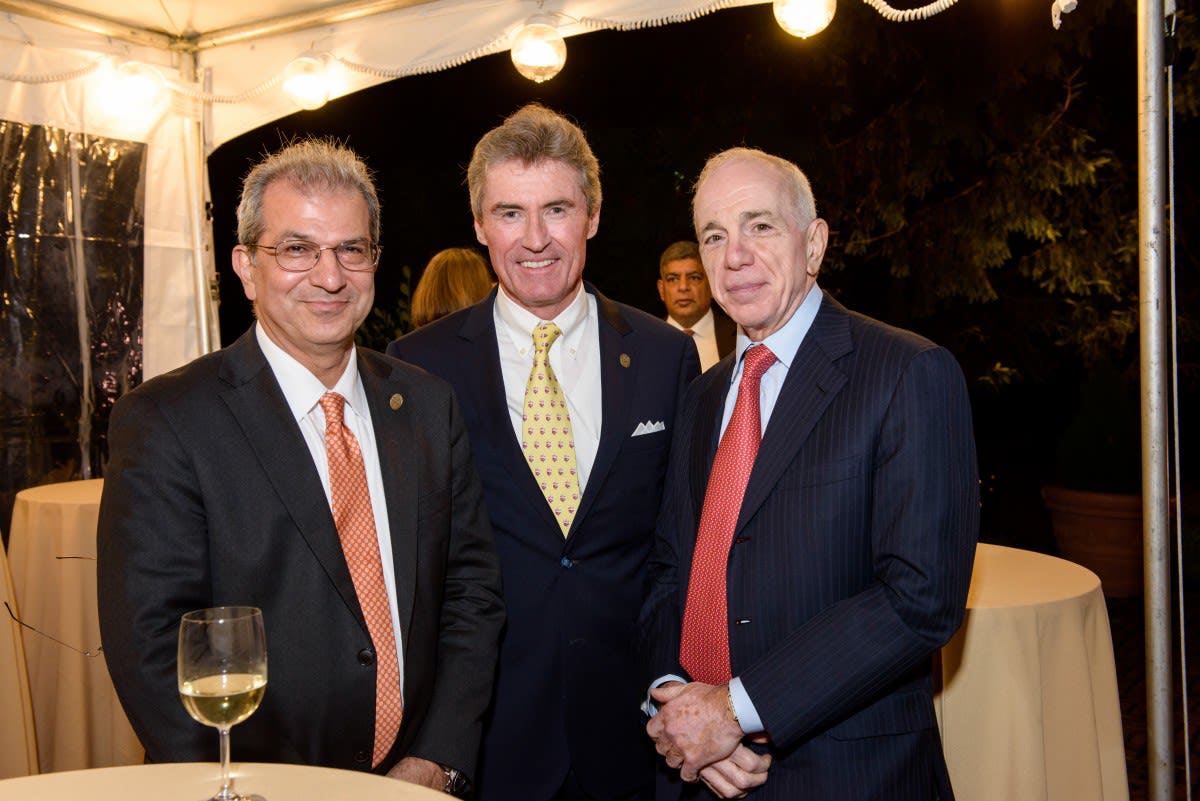 "I felt Stevens was a massive untapped resource for the financial industry," explained Hanlon, a co-chair for the fundraising campaign. "We were in a unique and enviable position, not only because of our geographic proximity to Wall Street but also in the sense that technology was just about to transform finance. That's why we went forward with the financial laboratories."

The campaign received another early boost from the American Bureau of Shipping (ABS), whose generous gift contributed significantly to the establishment of Stevens' ABS Engineering Center.

In addition, the generosity of trustee and former Board Chair Virginia Ruesterholz ’83 and husband Kevin Ruesterholz ’83, supplemented by support from trustee Annmarie Rizzo ’86, enabled the creation of the university's Ruesterholz Admissions Center. This modern and welcoming new admissions center opened in 2014, in the historic 1920s-era building previously known as Colonial House. 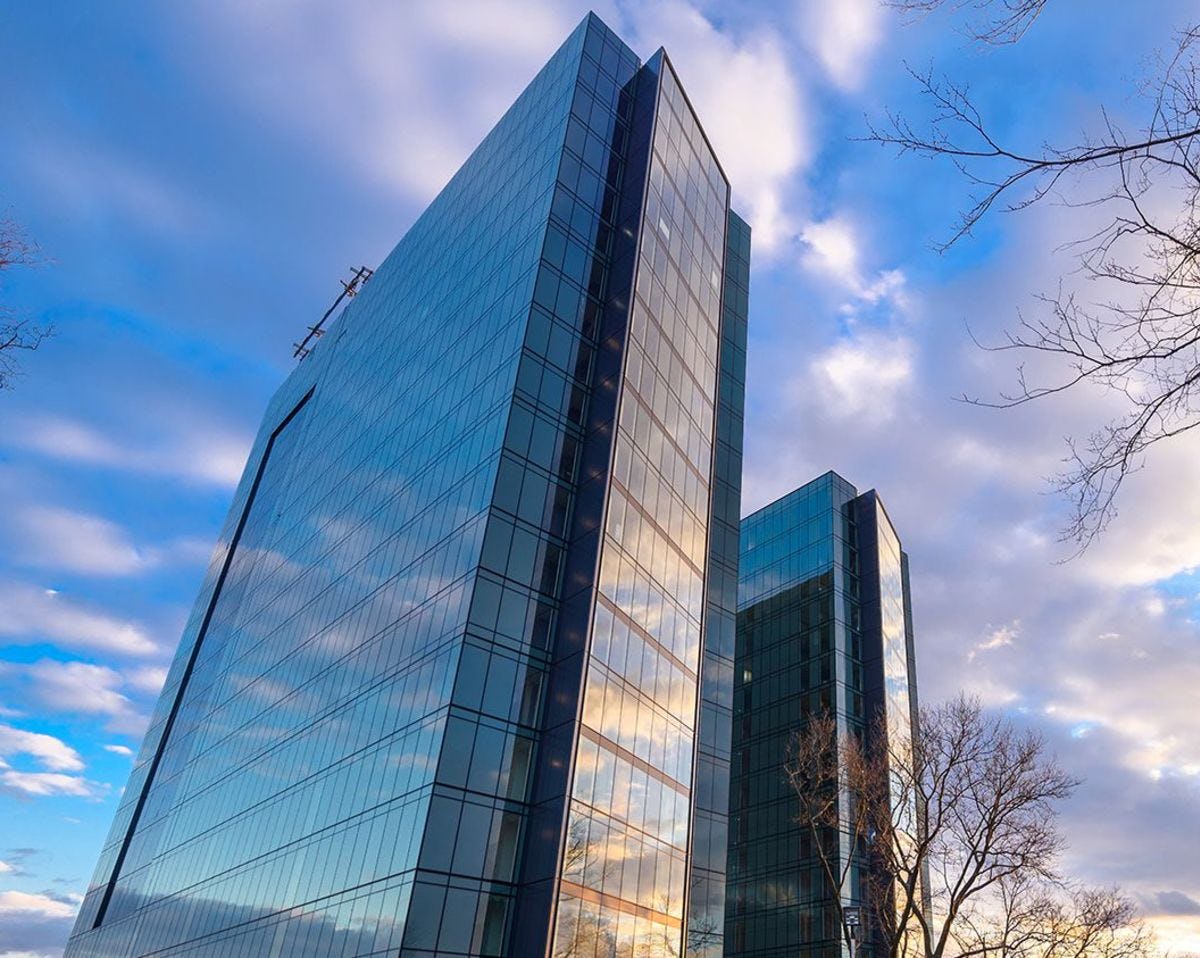 To accommodate the growth in size and impact prescribed by the university's strategic plan, Stevens then embarked upon two significant new infrastructure projects that would each inspire significant philanthropic support from alumni and friends of the university and upgrade the campus.

The four-story, 89,500-square-foot Gateway Academic Center — certified LEED Gold by the U.S. Green Building Council for sustainability — opened in 2019. The center's two wings, connected by a glass sky bridge, house 10 smart classrooms, more than a dozen laboratories and nearly 50 faculty offices in academic departments including the Department of Computer Science.

Among the building’s showcase spaces is the Mary Jane and Frank Semcer, Sr. ’65 Center for Healthcare Innovation, which aims to address gaps and issues related to advancing biomedical technology and healthcare delivery, and also serves as a focal point for the integration of external strategic partnerships.

"Stevens is a university on the rise," noted Dearborn. "These new facilities provide the state-of-the-art classrooms, lecture halls, meeting places and laboratories that are so instrumental to delivering the outstanding student outcomes we desire."

The University Center Complex, a combination housing facility and university center, was next to rise.

Scheduled to open in the spring of 2022, the construction of this transformational complex is the largest development project in university history — and was enabled by a number of generously directed gifts, including a $17 million gift from engineering executive Richard F. Harries ’58 and his wife Carol in 2018.

"The positive momentum and aspiration of the university are infectious," said Harries when announcing the family gift.

The structure's 19-story and 21-story towers will be clearly visible from New York City, and approximately 1,000 students will reside in the complex, which will feature skyline views, on-site fitness facilities, dining and café spaces — as well as multiple lounges, conference rooms and auditorium spaces for use by the entire campus community. This space will provide a magnificent venue for hosting academic conferences and community events.

"Buildings are really about what happens inside," explained Vice President Rose. "The conversations in lounges, the collaborations and ventures, the learning and research, the new friends and memories made: these all contribute to creating an ever-stronger community. We have unquestionably done this through the new facilities made possible by this campaign. The campus has been visibly transformed."

"There's not a spot on campus where you can say we have not invested in infrastructure," agreed Dearborn, "including cutting-edge classroom and lab technology, renovation, beautification and other upgrades. We are looking forward to meeting the needs of the next generations of our students."

Other gifts during the campaign were specifically made to enable and enhance student success, such as those that create, endow and augment designated scholarships and specific programs — building upon the strong annual support for scholarships already provided by Stevens alumni and friends.

"This campaign has been an example of alumni making a direct impact, investing in a legacy for generations of Stevens students to come by improving our campus and making available more resources to our faculty and students, such as through scholarships at all levels," noted alumni trustee Victoria Velasco ’04, president of the Stevens Alumni Association. "We are fortunate to receive wonderful annual support from our dedicated alumni." 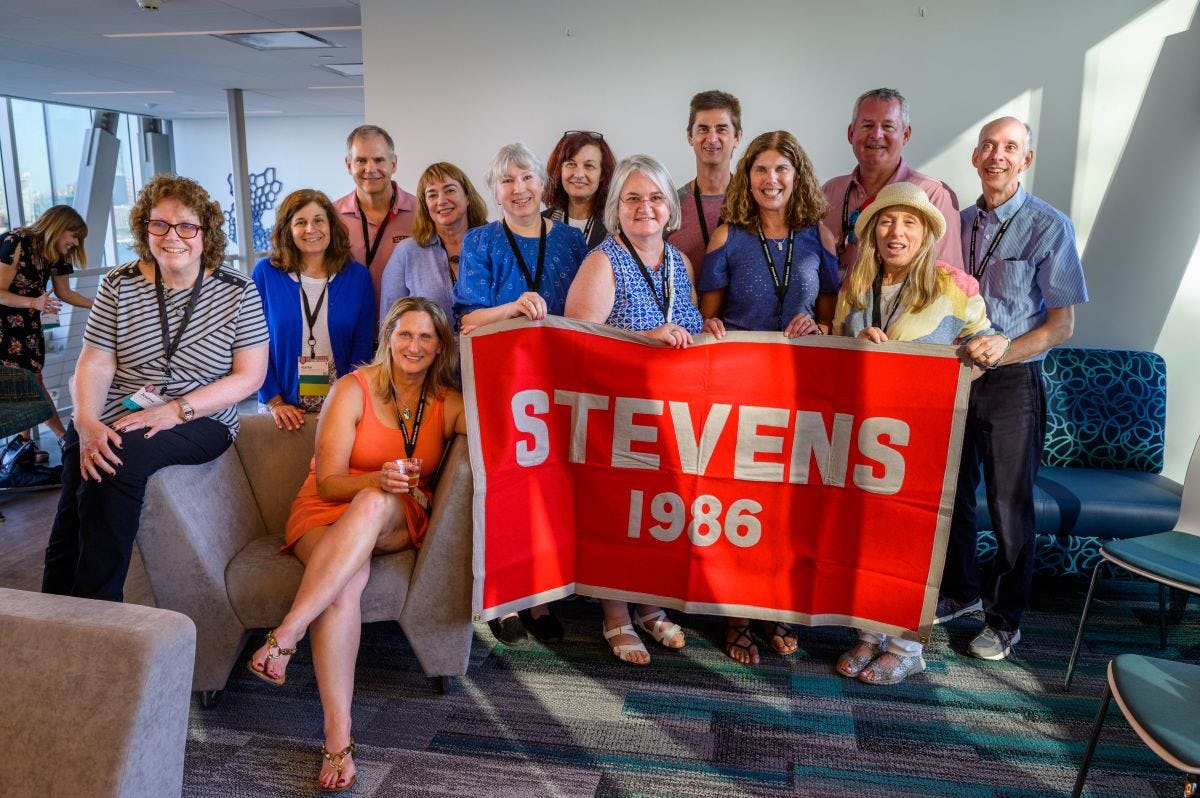 The Lawrence T. Babbio ’66 Pinnacle Scholarship Program, a merit scholarship awarded since 2015 to first-year students, is a stellar example of scholarship support that continues to attract and support talented students.

"The fundamental purpose of running a top school is to deliver the absolute best education and experience for its students," explained Babbio. "There's a life cycle to a great school. You attract the best students with modern facilities, great academic structure, a reputation for excellence, top professors and strong financial support. You nurture and produce an even greater student who does great things in life. And then perhaps that student comes back later in life, remembers how it all began, and wants to help the next generations succeed."

"You simply can't run a successful campaign without the support of a high-quality alumni base, and we're very fortunate to have a terrific alumni body," added Babbio. "With Stevens' academic profile growing stronger every year, the university is set up for even greater future success."

Philanthropy, including annual gifts, has also been key to the continuing growth, success and impact of the Stevens ACES (Accessing Careers in Engineering and Science) program, which received an Innovation in Education Award from the New Jersey Technology Council and has been recommended as a model for higher education institutions throughout the state of New Jersey. The program provides scholarships for both pre-college students and enrolled Stevens undergraduates, in order to improve access to a Stevens degree and a successful STEM career.

Participating in the Saturday Academy has strengthened my love for science. The classes I've taken have given me a solid foundation for STEM in college.
CHARLY CASTILLO, ART HARPER '78 SATURDAY ACADEMY STUDENT

In 2017, the A. James Clark & Alice B. Clark Foundation generously contributed the largest scholarship endowment gift in Stevens history to create the Clark Scholars program. This program provides generous scholarship funding and enables a suite of academic programs and support services to propel talented and underserved students toward successful engineering, computer science and cybersecurity degrees and careers.

The campaign also intensified longstanding efforts by STEP (Stevens Technical Enrichment Program) alumni to create and sustain a STEP-focused scholarship. The previously established scholarship received sufficient funding to become endowed in 2018, the 50th anniversary of the program, ensuring Stevens' signature STEP program will be robustly supported in the years to come. 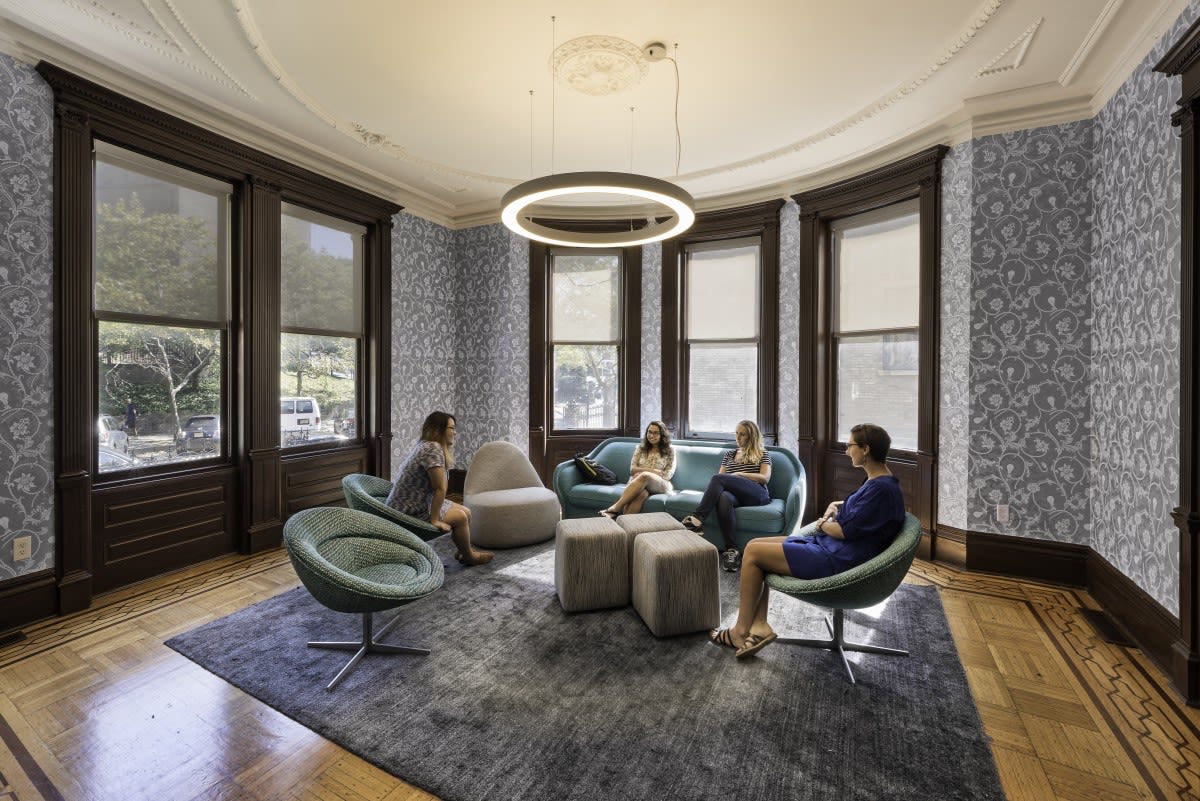 In 2019, gifts from Stevens alumnus Nate Davis ’76, Linda Harper and others enabled the creation and launch of the Art Harper ’78 Saturday Academy, a weekend program on campus for New Jersey high school students from underserved communities.

And gifts made during the campaign helped to create and sustain important programs and initiatives for women at Stevens such as the annual Women’s LeadHERship Conference, held at the university's Lore-El Center for Women's Leadership, which enjoys supports from donors including Dianne (Smith) Szipszky ’90 M.Eng. ’91, Jim Szipszky ’89 M.Eng. ’92 and Lisa Mascolo ’82.

"Diversity of thought is essential to innovation," said Mascolo. "When we empower more women to be successful, we empower innovation. The Lore-El Center is an important resource for Stevens to recruit and support young women, and with a Stevens education, they are positioned to make a positive difference in the world."

Faculty growth, another critical area identified in the university's 2012 strategic plan, has been significantly bolstered by directed gifts during the campaign.

"This campaign has had a direct impact on the recruitment and retention of some of the finest teachers and researchers,” explained trustee and campaign co-chair Hanlon. “This, in turn, has helped make Stevens a leader in STEM, business and the humanities. World-class faculty needed to see we were serious about growing our resources and our impact. Now our faculty are attracting media attention and funding, as well as creating increased prestige, reputation, recognition and demand for a Stevens education."

Gifts toward faculty support made during the campaign included two gifts from David Farber ’56 M.S. ’61 Hon. D.Eng. ’99, who is often referred to as the "grandfather of the internet." Farber contributed both an endowed faculty chair in computer science in 2016 and a faculty fellowship in 2017 in Stevens' College of Arts and Letters to raise awareness about the social impacts of scientific and technological development. 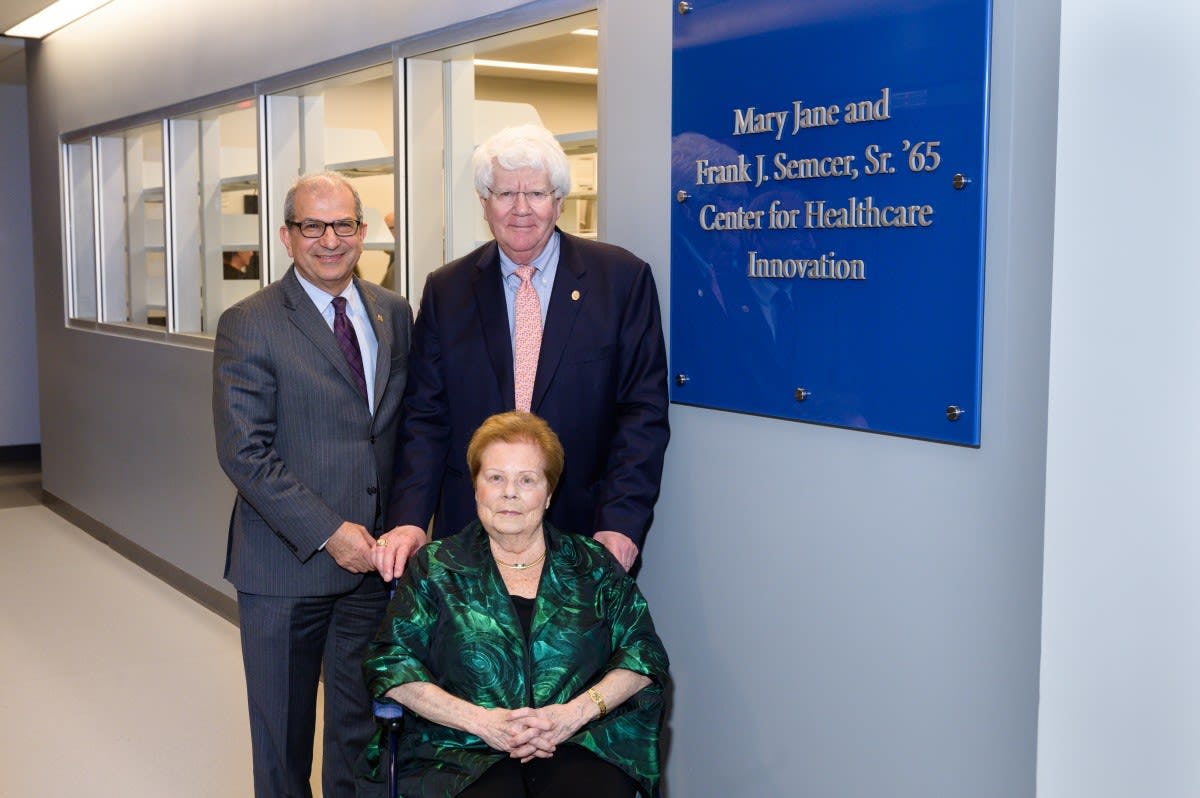 And the New Jersey-based utility PSEG contributed strong support to the prize-winning student-designed SU+RE HOUSE solar home as well as to innovative faculty research in energy conversion and storage, building upon the corporation’s longstanding relationship with the university.

It was another of the thousands of stories and gifts made possible by the alumni, friends of Stevens, faculty, staff, students and parents who have supported the mission and strategic direction of the university during The Power of Stevens campaign.

"The Power of Stevens campaign has demonstrated, once again, how important Stevens alumni are to the long-term success of their alma mater and how engaged, invested friends and partners help to advance this university," concluded President Farvardin. "Their generosity, dedication and intellect will continue to guide and support this university on its continued rise in the years ahead."