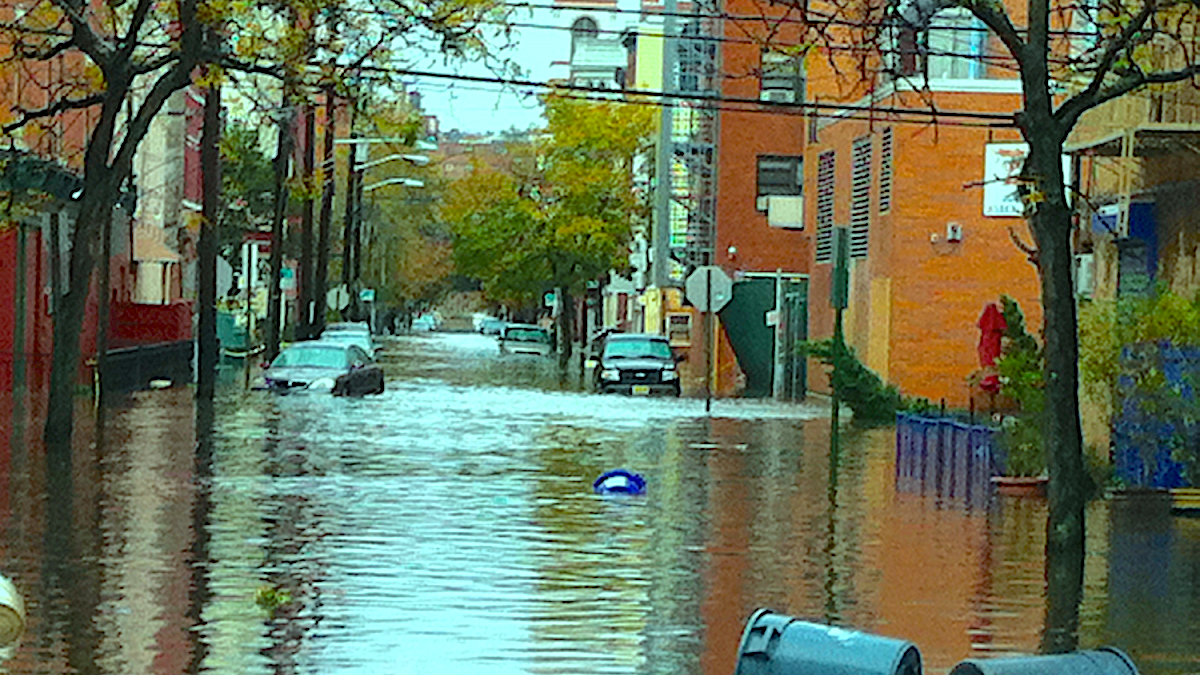 In late October of 2012, Stevens researchers appeared on local and national media to warn of unprecedented storm surges and floods from Hurricane Sandy, which was about to arrive on the metro New York region's doorstep. Journalists reacted with shock and incredulity.

We all know what happened next: Sandy devastated the region with a direct hit of powerful winds, devastating storm surges and flooding rains.

In New York City, subways and river tunnels flooded; power was out for weeks. The New Jersey shore was also badly damaged, with numerous homes, properties and business ruined or completely destroyed.

“Frankly, as a nation and as a region, we were unprepared,” said U.S. Senator Charles Schumer of New York after the storm took more than 200 lives and caused property damage topping $70 billion. 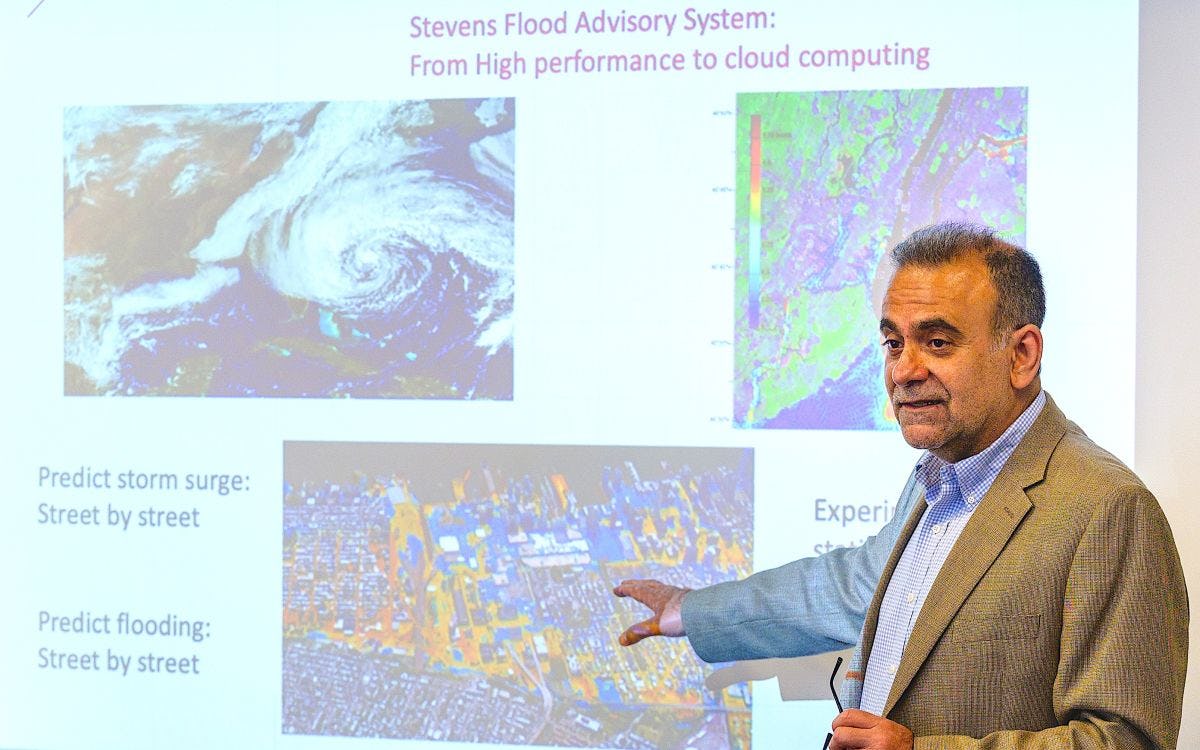 But a Sandy-sized event can happen again, say experts — leaving vulnerable coastal communities such as Long Island and the Jersey Shore in the crosshairs of future big storms and rising seas.

And some neighborhoods in the city may begin flooding once or twice every month anyway, during the next 20 years, during normal full and new moons — even without storms to help — due to rising sea levels.

That's why, since Sandy, Stevens researchers have redoubled efforts to help coastal communities predict and prepare for the next extreme-weather events.

Why the 'worst case' is worse, now

"Sea level rise is accelerating, including ice cap melting," explains Stevens ocean engineering professor Philip Orton, who assisted on an eye-opening  2019 report; issued by the New York City Panel on Climate Change. "The worst case, we found, is now a nearly ten-foot rise in the average sea level in the metro NYC... in just 80 years."

Previously, the worst possible scenario for NYC was calculated as a six-foot rise within a century. That's bad enough.

But now the situation could be even worse, prompting experts to jack up the potential rise to ten feet.

"Due to concern about melting ice sheets, we included a new worst-case scenario," explains Orton.

Even if that full ten-foot rise doesn't arrive this century, storms are getting stronger and the sea is creeping higher. The Atlantic Ocean has already risen, relative to the landscape, about 13 inches in the past century in fact.

And that's having an effect. Orton and Stevens colleague Reza Marsooli, another expert on climate change and historical flood levels, have determined that low-level flooding, as well as borderline-catastrophic events like Sandy — previously once-in-a-generation occurrences — will likely happen again.

Certain neighborhoods of New York City can expect to flood on a monthly basis as soon as 2050. Parts of Brooklyn, Queens and Staten Island will flood first and most often, and could even see land disappear by 2100 if climate continues warming and defenses aren't built.

"We're talking flooded streets, homes, high-traffic expressways and boulevards, subways," says Orton. "The infrastructure of the city was not engineered to factor in the sea rising and frequently flooding inland. And now that's going to become a problem."

The threat of rising seas wasn't known or predictable when New York's infrastructure was originally built.

But the sudden warming of Earth's atmosphere over the past century has been a real shock to the system, melting ice caps and sparking heat waves, wildfires and extreme weather. That's nudging ocean levels gradually, dangerously higher.

It happens like this: as we burn fossil fuel, gases are produced as by-product and rise. They don't leave the earth's atmosphere entirely; instead, they linger very high above, like insulation. The atmosphere begins to warm, just as you'd expect. That causes the world's oceans to warm up. Warmer water, in turn, fuels stronger hurricanes packing higher winds and raising bigger waves — pushing heavier tidal surges farther inland.

Most days, the Stevens Flood Advisory System is the first piece of information I check in the morning

"Coastal floods are becoming more common due to climate change," says Orton. "This is known."

For low-lying coastal cities like Miami, New Orleans and New York, partial inundation during the next century or two is nearly inevitable.

And hundreds of other coastal communities, once believed safely protected from the waves' brute force by beaches, berms, seawalls or distance, will now also be under the gun too.

Marsooli, who recently studied the Jamaica Bay region in collaboration with Princeton University and concluded it's more likely to begin flooding regularly in the near future, notes "this study... can be replicated to demonstrate how flooding in other regions will look by the end of the century.”

To assist communities, Stevens researchers are working to get a handle on the long-term effects of climate change on homes, properties, beaches and business districts  in the urban and suburban communities ringing New York Harbor and running along the Jersey Shore and Long Island.

The university's Davidson Laboratory was already a national leader at forecasting and warning of sudden, storm-driven floods. (That's why faculty experts were on CNN and FOX, sounding the warning, call pre-Sandy.)

And now the lab's tools are getting even smarter.

"It's critical to get the event-forecasting piece right," notes Davidson Lab director Muhammad Hajj, "because this saves lives, reduces adverse economic impacts and provides officials with time to warn the public, evacuate if needed, move critical infrastructure and otherwise prepare for extreme-weather events."

The lab's secret sauce is the proprietary Stevens Estuarine and Coastal Ocean Model (sECOM), a mathematical model that's considered among the best in the world at modeling urban-ocean environments.

sECOM forms the backbone of both NYHOPS and the Stevens Flood Advisory System (SFAS), the university's two main flood forecast and visualization tools.

Stevens researchers including Orton, Jon Miller and Raju Datla have continually tweaked sECOM's math to keep forecasts powerful and accurate over time, introducing parallel computing techniques and new assumptions to the algorithms inside it to speed up the calculations and forecasts.

To improve performance, the group also tweaked the model's physics to account for the ways in which waves enhance a wind-driven storm surge. And to help the system better process and forecast future mega-storms like Sandy, the model was expanded to cover a larger physical region of the Atlantic Ocean than it previously did.

"These forecasts were originally designed to focus on the effects of winter storms," explains Orton. "They didn't always perform optimally during very large storms."

Fighting floods together, street by street

The sea will continue to encroach inland on the city, Orton found

Most deaths during hurricanes are drownings, and Sandy's power, placement and timing combined to produce the highest floods and storm surges ever recorded in the metro New York region. The storm brought an 11-foot tide to New York Harbor and similar record tides to the Jersey Shore; it took several years to rebuild beaches, homes and communities back.

Determined not to be caught off guard again, state and federal officials have reached out to Stevens for help.

"Especially during extreme events, our predictions are sought by different entities for assessment of vulnerabilities, identification of potential impacts and development of preparedness plans throughout New Jersey and New York," notes Hajj.

One of the first relationships Stevens developed post-Sandy was an exclusive contract with the Port Authority of New York & New Jersey (PANYNJ), the interstate agency charged with managing the region's airports, bridges, tunnels and seaports.

Stevens built new tools, models and warning systems to predict floods in Hoboken and the New Jersey Meadowlands for New Jersey Transit (NJT), as well. The goal: to help NJT reposition its train equipment to safer areas before high surges and warn commuters prior to predicted floods.

And Hoboken city officials also regularly access Stevens' forecasting tools and public updates — and use them when preparing for storms.

"Most days, the Stevens Flood Advisory System is the first piece of information I check in the morning," says Caleb Stratton, Chief Resilience Officer for the city of Hoboken.

"Accurate records and projections of surge allow us to escalate our emergency operations in real time, and make informed decisions about the resources and communications that need to be shared with the community."

Other projects from Davidson Lab researchers include visualizations of climate change-driven floods for the city of Philadelphia; dramatic modeling of the long-term effects over time of sea-level rise on Jamaica Bay (where much of the land surrounding John F. Kennedy International Airport could be swallowed up); and projections of the future of the Hudson River flood plain.

Stevens is participating in a host of other efforts to prepare homes, properties, beaches and business districts in the region, as well.

Led by Stevens professor Marouane Temimi, Stevens is a co-founding institution for the newly formed Cooperative Institute for Research to Operations in Hydrology (CIROH) consortium, which will collaboratively develop and leverage useful research to assess and predict water and weather hazards.

Faculty and student researchers study, design and advise a range of proposals, plans and blueprints, from a solar-powered home that can withstand hurricane-force winds (and close its own shutters to resist rising flood waters) to gated barriers in the sea that could be locked shut during strong surges to reduce damage.

Stevens researchers advised participants in the Rebuild by Design competition, including a winning "Living Breakwaters" proposal that incorporates natural breakwaters (including live oyster reefs) just off the southeastern shore of vulnerable Staten Island. That project has been funded and is now being constructed.

Orton has advised Jersey City, New Jersey's second-largest city, on engineering and landscaping plans that could direct flood waters around, rather than into, the city itself.

Stevens transportation expert Yeganeh Hayeri is working to improve resilience and evacuation planning in Stevens' home city of Hoboken by quantifying the effects of flooding on mobility and accessibility, and simulating driving and evacuation behaviors during floods.

And ocean engineering professor Miller, an expert on beach replenishment, was recently awarded support to study living shorelines that could help protect communities and property along New Jersey's coastline.

"We have a responsibility to provide and continually enhance our modeling ability," sums Davidson Lab director Hajj. "Communities and agencies urgently look to Stevens for this critical data in times of need.

"The university will continue to serve communities and the government by helping in the preparation for sudden extreme-weather events, as well as for the more gradual, but also devastating, effects of gradual sea-level rise."