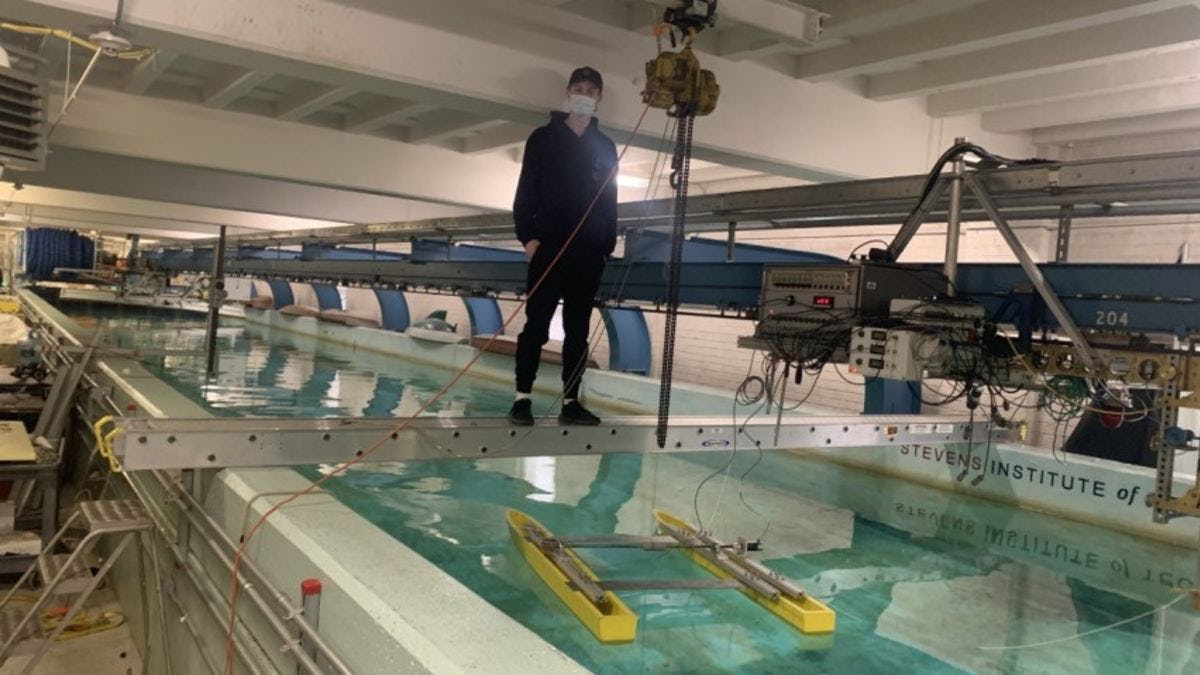 Developed in partnership with Virginia Tech, the renewable energy-harvesting vessel will compete at the U.S. Department of Energy's Marine Energy Collegiate Competition.

With the perpetual motion of its waves and tides, the Earth's ocean represents a highly predictable, theoretically limitless source of kinetic energy.

At a power density of 10-50 kilowatts per meter, in fact, wave energy is a more efficient, more concentrated form of energy than all other renewable energy resources, including solar and wind. Efficiently harnessed, waves along the U.S. coastline alone have the potential for generating 64% more electricity than is currently generated through all sources across the country.

Developed in partnership with Virginia Tech, this wave energy-harvesting vessel is one of 17 projects chosen to compete in this year's Marine Energy Collegiate Competition (MECC), sponsored by the U.S. Department of Energy. The virtual event will be held the week of May 23.

Given his major concentration in naval engineering and minor in green engineering, Brunquell said the project afforded him the opportunity to combine these two areas while exploring ways of developing sustainable renewable energy technologies.

Brunquell's areas of responsibility on the project were two-fold: to design an optimized hull for the buoy section of the vessel and to develop a half-scale model to test its power take-off (PTO) system's electricity-generating capabilities.

The primary use case for which the ocean-powered vessel was designed, Brunquell said, was for the monitoring and maintenance of offshore farms, such as wind farms and marine aquaculture.

Equipped with sensors, cameras and wireless communication systems, such a self-sustaining robot could monitor and respond to changes in facility or environmental conditions, while generating enough electricity to propel and maneuver itself and to provide electricity to the farm's operations and other manned or unmanned surface and underwater vehicles.

Functioning autonomously, the vessel would also provide a cost savings through its reduced need for personnel.

"Instead of sending an individual to monitor the offshore farm, you could send out this device, and it would be able to check on how everything was working," Brunquell said.

Designed as a catamaran, the vessel is composed of a double-hulled buoy that floats on the ocean's surface and a heave plate submerged below it, which provides stability. A PTO system generates electricity through the difference in relative motion between the two.

To optimize the buoy's hull design, Brunquell developed a design matrix comparing different types of hulls and how well they performed according to each of three primary parameters: stability, heave motion and maneuverability. Heave motion is the motion of a vessel as it moves vertically.

"The way I judged how well a hull type would work would be running it through multiple programs that allowed me to see the relative heave response amplitude operator, which is how much motion compared to the wave amplitude will the boat actually respond to," he said.

This suite of conceptual ship design software programs can simulate different operating conditions, such as wave height, wave period, ship heading and rudder direction, Brunquell said. "This allowed me to compare how my theoretical designs matched up in maneuverability, heave response and thrust power."

Given the vessel's primary use case and expected operating conditions — with waves occurring on average every five seconds, with the highest third among them averaging three feet — the need for stability remained foremost in Brunquell's mind.

"[Stability] was weighed a lot more in my design matrix because when you're operating with different wave heights and with different vertical center of gravity values, you can get some unstable characteristics of the model," he said. "I wanted to make sure, no matter what range of vertical center of gravity and weight that they have on the vessel, I was able to see if the design was decent enough to operate in the wave conditions that [the team is] hoping for."

The only Stevens student working on the project, Brunquell worked remotely from Hoboken while communicating electronically with a team of mechanical and computer engineering students in Virginia.

"[Datla and Kokro] were able to use their background knowledge of wave energy and helped me understand what parameters for the hull design were needed and what I should really focus on for designing the most optimized catamaran," Brunquell said.

For the spring semester, Brunquell shifted his focus from the vessel's hull design to its energy capabilities, developing and testing a half-scale model to test the validity of its electricity-generating PTO system.

Although a PTO system can capture energy in a variety of ways, Brunquell said, "for this system specifically it works through the relative heave motion of a surface vehicle as it goes up and down over the waves."

"That relative motion between the two is connected through a string," Brunquell explained. "That string is wrapped around a spool a few times to create some friction, and as the distance between the submerged body and surface body changes, it's able to spin the spool, which spins a motor and creates electricity."

"If you have a larger wave, you get much larger values and more speed in the motor, which creates more electricity," he said.

The half-scale PTO design was developed in collaboration with mechanical engineering students at Virginia Tech, with additional input on materials from the designers and machinists at the Stevens Machine Shop.

Budget, resource, and time limitations unfortunately meant that neither the half-scale model developed by Brunquell nor the full-scale model built at Virginia Tech were able to incorporate the buoy hull design that Brunquell had developed in the fall. Working with what was readily available, Brunquell employed an existing 3 x 2-foot catamaran made of tool foam for the half-scale model, while the Virginia Tech students incorporated six-foot kayaks into the full-scale version. Brunquell tested the scale model in the high-speed towing tank at Stevens' Davidson Lab.

Although the model is built at 50% scale, test data resulting from it does not translate into full-scale terms quite so neatly. When you scale down electricity generation experiments, Brunquell explained, the data "gets a little bit wonky."

"You get data that isn't exactly of the ratio of what you're looking for," he said.

Rather than a perfect replica of the vessel's systems and output in miniature, "the scale model served as a proof-of-concept that the device will create electricity rather than saying how much it will create," he said. "The weekend after we tested our scale design, [the Virginia Tech students] were able to test their full-scale design in a lake, and there they were able to get a peak power output of one watt."

Brunquell found the experience of working remotely with the Virginia students oddly similar to what many new hires must have felt in the past two years since the COVID-19 pandemic began.

"It felt like starting a new job at a new company and working hybrid," he said. "Since I didn't know anyone at Virginia Tech, and I never met them in person, it was difficult to see what they were looking for and how they wanted to do things."

The absence of rapid, in-person feedback proved especially challenging when designing and fabricating the half-scale PTO system. Despite advanced communications tools, collaborating with a team nearly 500 miles away could be both frustrating and inefficient.

"When I wanted immediate input or immediate assistance, I didn't have that. That was definitely hard," he said.

"But through Zoom — lots of Zoom calls — I was able to make sure that I was doing things correctly, and doing the things that they wanted to make sure they got data for."

"While other naval engineering senior design projects have teams of three or more [local] members, [Brunquell] had to work individually at Stevens while collaborating remotely with the team from Virginia Tech. This posed unique challenges for coordinating schedules and design discussions," Datla said. "[Brunquell] handled these very well and successfully completed the fabrication and testing of the device."

Closer to home, Brunquell noted he was impressed by "how well the faculty here at Stevens was able to help me with a project that they didn't fully know about," he said. "That definitely helped me accomplish some pretty cool tasks."

In addition to his contributions to the MECC competition, Brunquell showcased his design and model as part of Stevens' 2022 Senior Design Expo, held on April 29.

After graduation Brunquell hopes to secure a position that will allow him to use his skills as a naval engineer to contribute to a more sustainable future.

Although open to opportunities in all industries, Brunquell does have his sights set on one in particular: the cruise industry.

"I went on my first cruise when I was two months old," he said. "I've been on a ton, and I love every one."

This lifelong love for cruise travel and a high school visit to Stevens, in fact, helped forge his education and career path. Originally considering a major in industrial engineering, Brunquell discovered during a campus tour how he could leverage his favorite pastime into a profession.

"I didn't really know about it [naval engineering] until my first trip here at Stevens," he said. "During one of the tours of all the facilities, they showed us Davidson Laboratory, and I was able to talk with some of the naval engineers there. Once I left the tour, I was like, Yeah, this is what I want to do. I definitely want to do naval engineering."