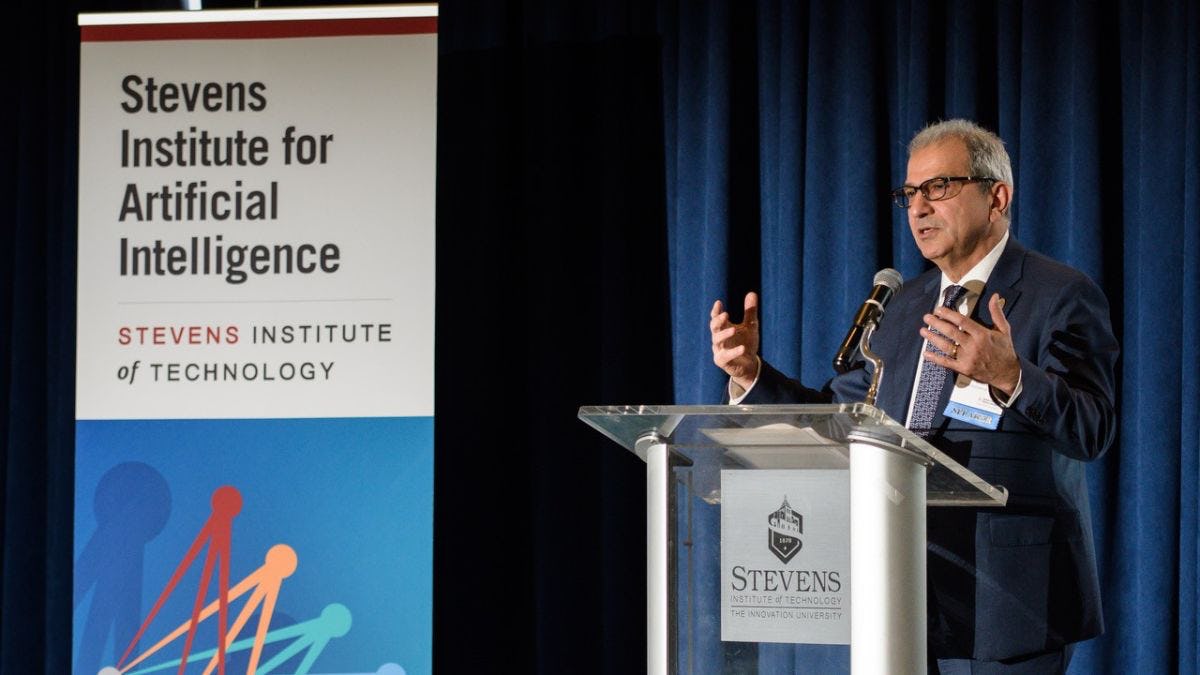 Stevens President Nariman Farvardin addressed how advances that come out of SIAI will give rise to new products, solutions and technologies

Stevens showcased its expertise in AI at the debut of Stevens Institute for Artificial Intelligence; NASA, IBM, Pfizer, L’Oreal and JPMorgan Chase, among many others, attend

(Hoboken, N.J. – Monday, Dec. 3, 2018) -  Industry, government and university leaders from across different sectors came together Nov. 28 to attend the Stevens Institute for Artificial Intelligence debut event, where Stevens’ faculty demonstrated the potential impact of their AI research – and highlighted Hoboken’s lure as a technology hub.

With more than 125 guests in attendance, including alumni and board of trustee members, Stevens President Nariman Farvardin introduced Hoboken Mayor Ravinder S. Bhalla and spoke about how advances that come out of SIAI will give rise to new products, solutions and technologies, but how they will also present challenges.

“I am convinced that in the relatively near future, AI will result in the smartest investment machines, the best chefs in the world, superhuman doctors, futuristic transportation and logistics and many other changes that we cannot yet even imagine,” said Farvardin, who pledged his full support to ensure that the SIAI achieves its full potential.  “With all these changes, there will also be dramatic impacts on individuals and on society. As scholars, researchers and citizens, we need to pay close attention the social implications of AI, as well.”

Mayor Bhalla reinforced the potential for Hoboken and Stevens to become major partners for industry giants, saying that Hoboken is growing into a technology-driven town and as “we seek to be ahead of the curve, we need partners like Stevens Institute of Technology to advance technology-based solutions for social problems.”

Representatives from Nokia Bell Labs, IBM, NASA, U.S. Airforce, U.S. Army, L’Oreal, FinTech, NeuraFlash, JPMorgan Chase, GE Ventures and Columbia University, among many others, spoke with faculty about their work; from applications in healthcare such as AI-enabled early detection of Alzheimer’s and dementia to improving infrastructure safety through AI-enhanced smart underwater robots to mathematical models to train smarter AI.

Introduced by Provost Christophe Pierre, K.P. "Suba" Subbalakshmi, the founding director of SIAI, a technology-driven collaboration of more than 50 faculty members from all academic departments at Stevens, gave a brief presentation and described the formation of the institute, highlighting the nine focus areas. They include:

“I hope that with this event, SIAI showcases not only what we can do, but how we can work together with students, alumni and industry leaders to dream up new ideas for what AI can do,” said Subbalakshmi. To that end, she hopes to maximize SIAI’s influence by building an industry affiliates program, forming partnerships between the university and foundations and creating educational training programs including an upcoming doctorate in AI.

In the corner of Bissinger Room, overlooking the Manhattan skyline, Kelland Thomas, dean of the College of Arts and Letters, along with Donya Quick, whose work lies at the intersection of computer music, artificial intelligence, machine learning and computational linguistics, demonstrated an AI-platform for composing music, complete with Thomas playing the saxophone in front of a group from Nokia Bell Labs.

On the other side of the room, Yi Guo, who heads the Robotics and Automation Laboratory at Stevens, is using AI to teach robots to assess pedestrian behavior in crowded areas. The work has public safety applications such as emergency evacuations and crowd management planning; although it can be extended to a variety of civil and military missions, including cleanup of hazardous waste, search and rescue and surveillance and reconnaissance.

In his welcoming remarks, Provost Pierre emphasized that Stevens is devoted to developing critical partnerships in AI as well as educational programs—including creating three new master’s programs beginning in spring 2019 and hiring more than a dozen new faculty members in key areas of AI and machine learning across Stevens’ four schools.

“I am personally passionate about AI,” said President Farvardin, who in recent years has invited renowned AI experts such as Peter Norvig of Google, Tom Mitchell of Carnegie Mellon University, Oren Etzioni of the Allen Institute of Artificial Intelligence and Daniela Rus of Massachusetts Institute of Technology for his Presidential Distinguished Lecture Series. “In my opinion, it is the beginning of a revolution that will change the world as we know it.”