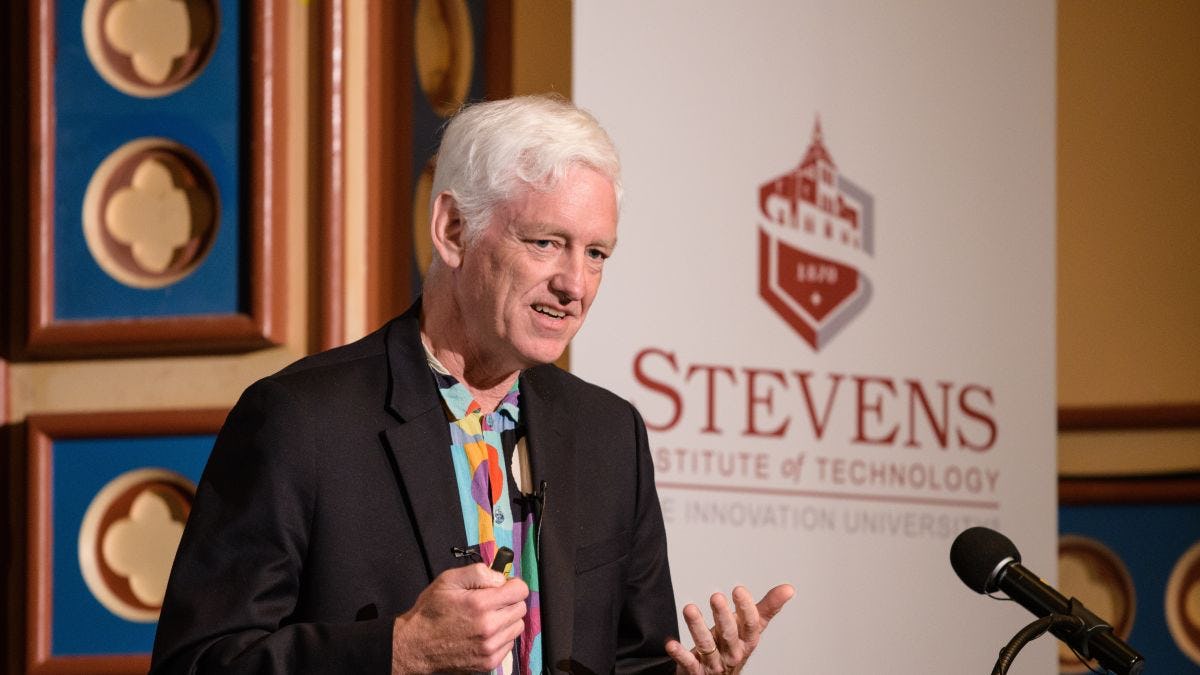 The rapid growth of "smart" technology– which now pervades mobile phones, cars, household appliances, fitness devices, navigation and many other aspects of daily life – has made artificial intelligence (AI) a white-hot topic in business and industry. Peter Norvig, director of research for Google, discussed the promise — as well as the pitfalls — of AI technology at Stevens Institute of Technology.

Introduced by Stevens President Nariman Farvardin as the “superguru of artificial intelligence” and clad in his trademark Hawaiian shirt, Norvig co-authored Artificial Intelligence: A Modern Approach, the leading textbook in the field. Prior to becoming director of research at Google, he presided over the search giant’s core search algorithms group, and was also previously head of NASA Ames' Computational Sciences Division as the agency's senior computer scientist.

Computers creating their own rules: The new normal

Norvig’s talk, which centered on the possibilities and unique challenges posed by machine learning, demonstrated the compelling advantages machine learning-created programs have over traditional software development.

In traditional software development, he explained, human programmers come up with an idea to perform a task. They then perform all the steps needed to create a program for solving a problem.

Advances in technology, he says, are now making it possible for computers to take the place of humans in writing programs. Using the metaphor of a “black box” to describe artificial intelligence, Norvig explained how a computer can now be fed large numbers of examples or quantities of data until it learns to complete a task itself without human direction.

The most obvious advantage from this shift in the way software is built is the speed in which tasks can be performed.

“[Machine learning] allows you to go fast,” Norvig noted. “Instead of having the programmer spend days and weeks developing the program, you can throw some data at the machine and you can instantly get a response.”

But this breathtaking speed can come at a steep cost – the greater the speed, the greater the crash when a problem develops, he cautioned. Another issue that arises in machine learning-created software is the increased difficulty in isolating bugs. Not being able to see into the “black box” makes debugging a great deal more challenging.

“There aren’t established and proven debugging tools and processes, as there are with traditional software,” he explained.

With so much emphasis on data, applications created by AI will also inevitably give rise to new issues of privacy and security.

“If we’re going to base systems on data, it would be nice if we could collect data from lots of people, but we don’t want that data to leak out. That’s a continuing research field,” Norvig acknowledged.

Perhaps the most exciting possibility of AI is its capacity to skip step-by-step instruction entirely and “surprise” us with the results.

While the promise of machines learning to think for themselves creates great excitement among technology professionals, it causes anxiety for others.

Still, Norvig makes a clear distinction between intelligence of the human kind and machine intelligence. He is adamant that the goal of machine learning is not to duplicate humans, but instead to team humans and machines together to do things each cannot do on their own.

“We build these tools to serve us. To the extent that they’re useful, we use them, and to the extent they free up time for us to do other things means we can do other things, and there are a lot of cases where you want to have a combination of humans and computer tools," he noted.

After a Q and A session with the lecture attendees, President Farvardin presented Norvig with Stevens' President’s Medal, the first ever to be conferred on campus at Stevens, in honor of Norvig’s significant impact on society and his contributions to science and technology.

“Dr. Norvig has illuminated some of today’s most critical topics, such as machine learning, which have been vital in informing the public’s understanding of the influence of technology on society,” said Farvardin, who then announced a special tribute to Norvig on behalf of the university. “For the first time, starting next fall, we will have a student at Stevens Institute of Technology, that Dr. Norvig will have a lot of input in selecting, who will receive a scholarship in honor of Dr. Norvig.”

The President’s Distinguished Lecture Series, which launched in fall 2012, offers unprecedented access to influential scientists, technologists, policymakers and business executives at technology driven companies who are shaping 21st-century society in direct alignment with Stevens’ own mission. The series focuses on important topics in science and technology, the linkages between societal issues and advances in science and technology, and related policy issues.