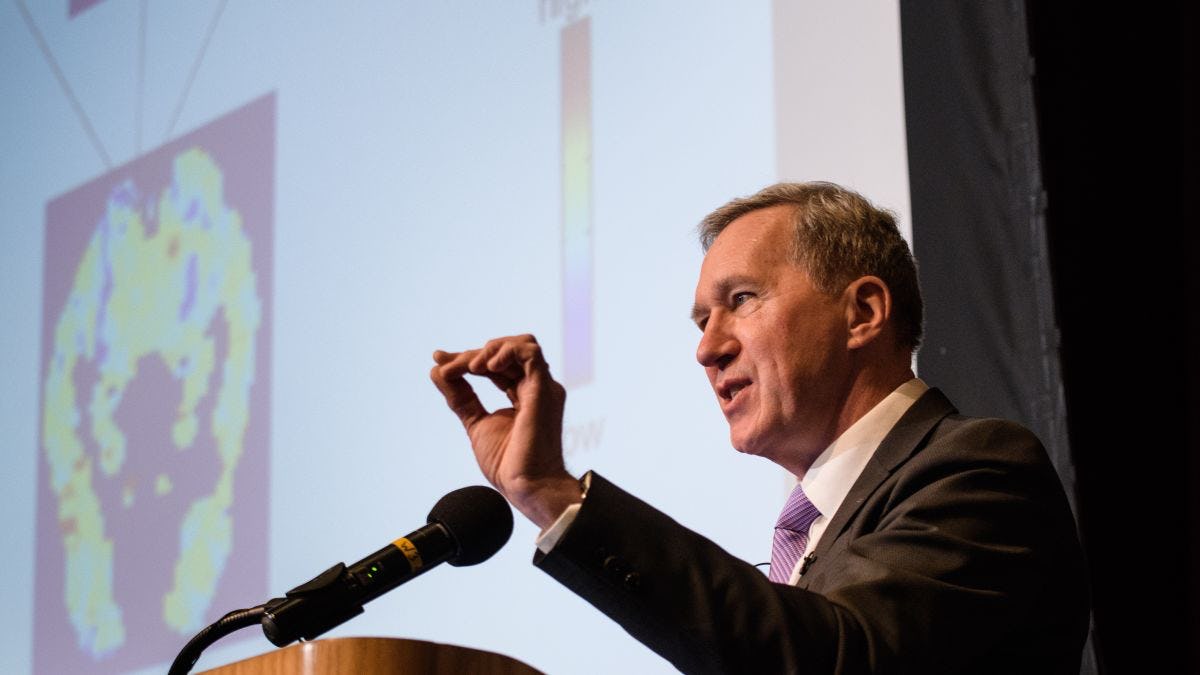 The inner workings of the human brain is a mystery that has fascinated and confounded scientists for centuries. But with advances in brain imaging technologies, scientists are now able to closely study the neural activity of the brain in ways that can lead to a deeper understanding of how the human mind works.

The 11th speaker in the President’s Distinguished Lecture Series at Stevens Institute of Technology is a leader in this groundbreaking research. Dr. Tom M. Mitchell is the E. Fredkin University Professor at Carnegie Mellon University (CMU), where he founded the world's first machine learning department.

Dr. Mitchell offered a thought-provoking summary of CMU’s machine learning approach, what has been learned, and newer questions that are currently being studied.

The ability to capture images of brain activity has been nothing less than revolutionary, says Dr. Mitchell. 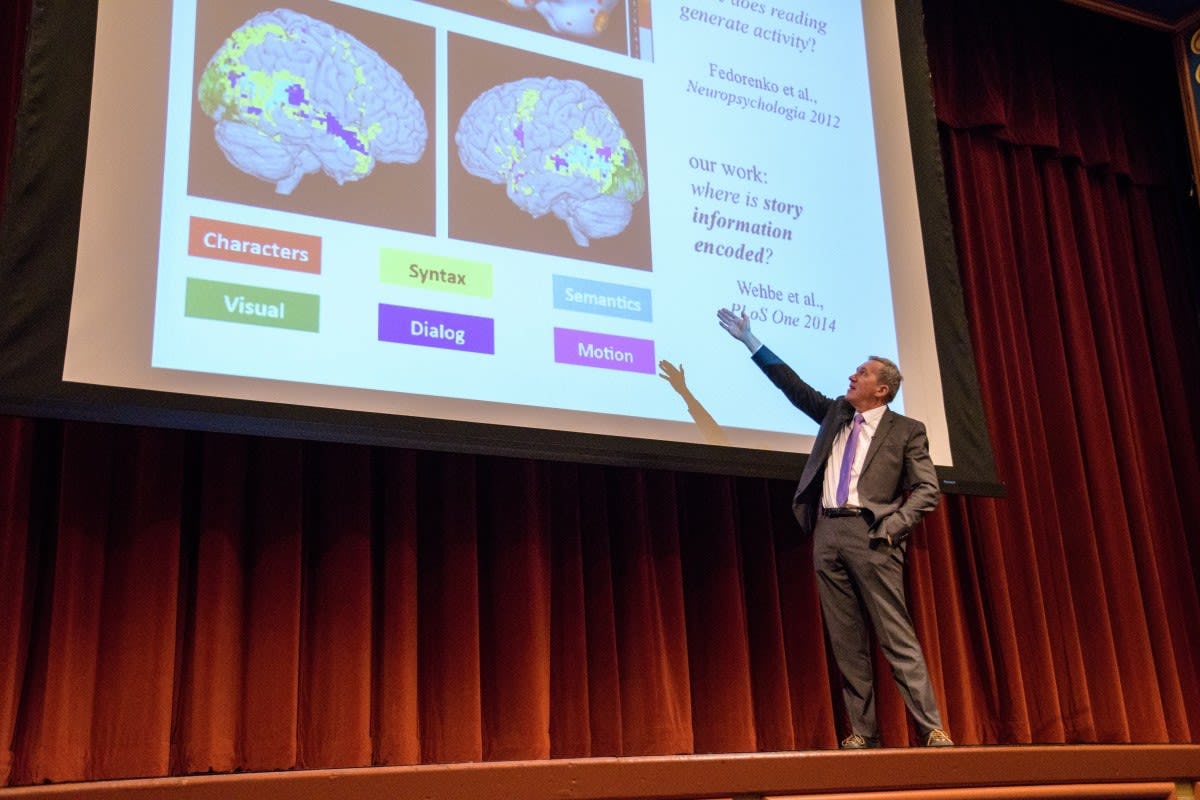 Dr. Mitchell and his neurosemantics research team at CMU use fMRI (functional Magnetic Resonance Imaging) to collect data about the neural activity of participants.

The technology works similarly to magnetic resonance imaging (MRI). But rather than capturing images of organs and tissues, fMRI looks at the blood flow in the brain, and more importantly, changes in the blood flow, to detect areas of activity.

During the fMRI scanning procedure, participants were shown pictures and words like “bottle” or “hammer.”

The data collected from the fMRI scans was then fed into a machine learning classifier trained to determine whether a person is thinking about a hammer or bottle, for example.

The classifier acts as a “virtual sensor” of information content, he explains. “They let us see not just the neural activity but information coded in the mental state.”

In analyzing the fMRI scans, Dr. Mitchell and his team saw that a similar activation pattern occurred among the participants. Scans showed their brains lit up in the same areas when the same words or things were shown to them. It’s a pattern that Dr. Mitchell found “astounding.”

“When we started this I had no idea that we would get a result like this. What it really means is that even though we all have very different backgrounds, very different life experiences, somehow we have a shared physical spatial pattern of neural activity that encodes word meanings.”

Dr. Mitchell and the neurosemantics research team are conducting experiments at CMU that move beyond words. They’re using machine learning and brain imaging, including magnetoencephalography (MEG), to study the neural processes of reading. It’s a study that involves scanning the brain activity of individuals as they read text, and creating computational models that can predict neural activity with a high level of accuracy.

“There’s a lot that we’re going to learn, including how to use machine learning to analyze and interpret data; and to me the field is moving happily towards a point where AI systems become models, a way of studying how the brain performs similar functions.” 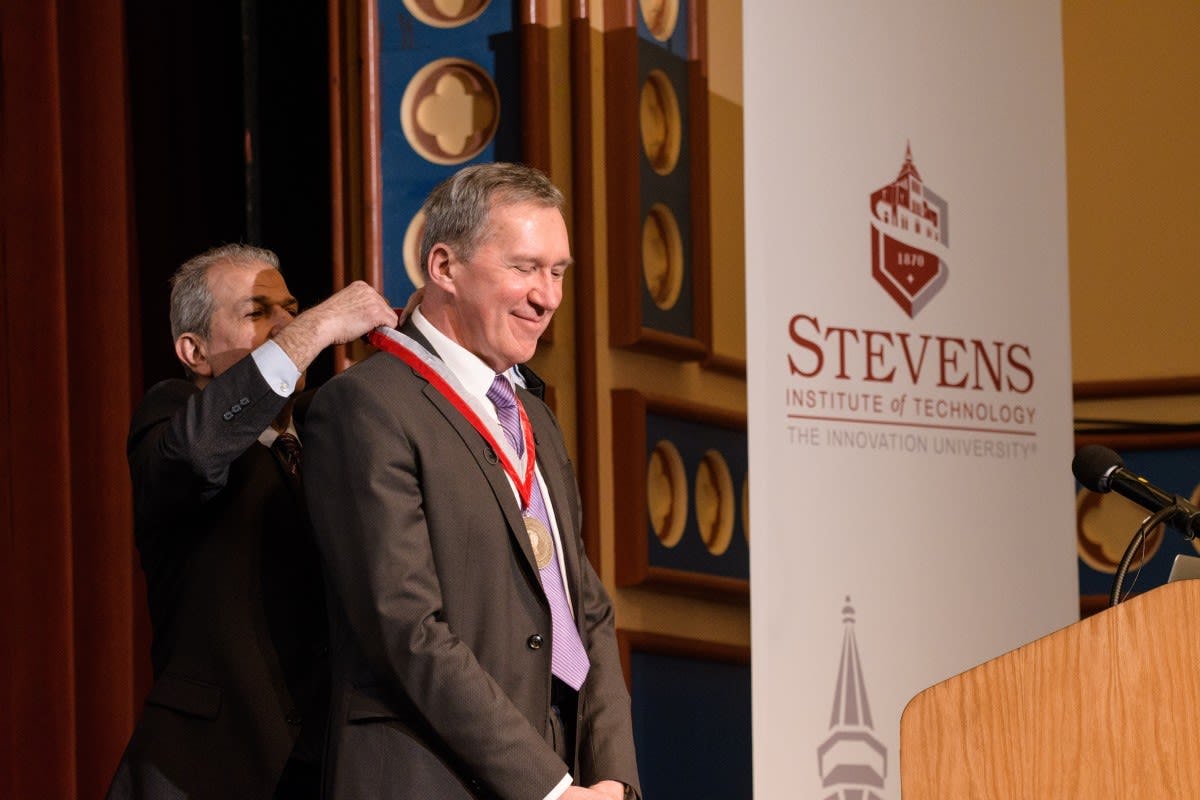 After a Q and A session with the lecture attendees, Stevens President Nariman Farvardin presented Dr. Mitchell with Stevens' President’s Medal, the third ever to be conferred on campus at Stevens, in honor of Dr. Mitchell’s significant impact on society and his contributions to science and technology.

President Farvardin then announced a new scholarship as a tribute to Dr. Mitchell on behalf of the university. Starting in the fall of 2018, a student at Stevens will receive a scholarship in honor of Dr. Mitchell.

Join us in the fall for the next President’s Distinguished Lecture Series on Tuesday, November 28, 2018, featuring Dr. Daniela Rus, Andrew (1956) and Erna Viterbi Professor of Electrical Engineering and Computer Science and Director of the Computer Science and Artificial Intelligence Laboratory (CSAIL), MIT. 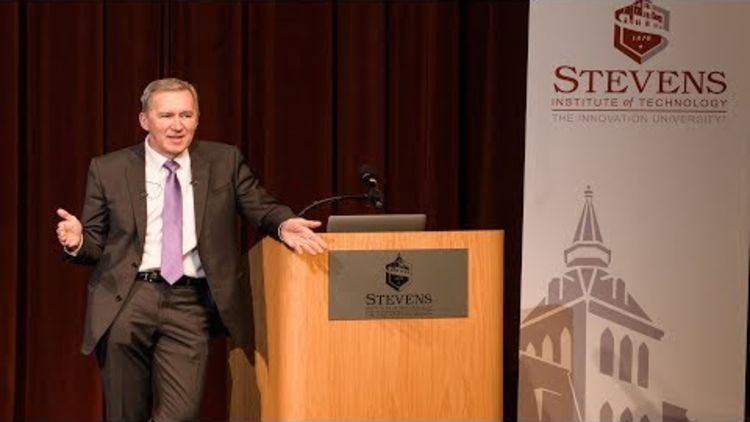 The President’s Distinguished Lecture Series, which launched in fall 2012, offers unprecedented access to influential scientists, technologists, policymakers and business executives at technology-driven companies who are shaping 21st-century society in direct alignment with Stevens’ own mission. The series focuses on important topics in science and technology, the linkages between societal issues and advances in science and technology, and related policy issues.