In the Future, Everyone Will Be Able to Make Robots 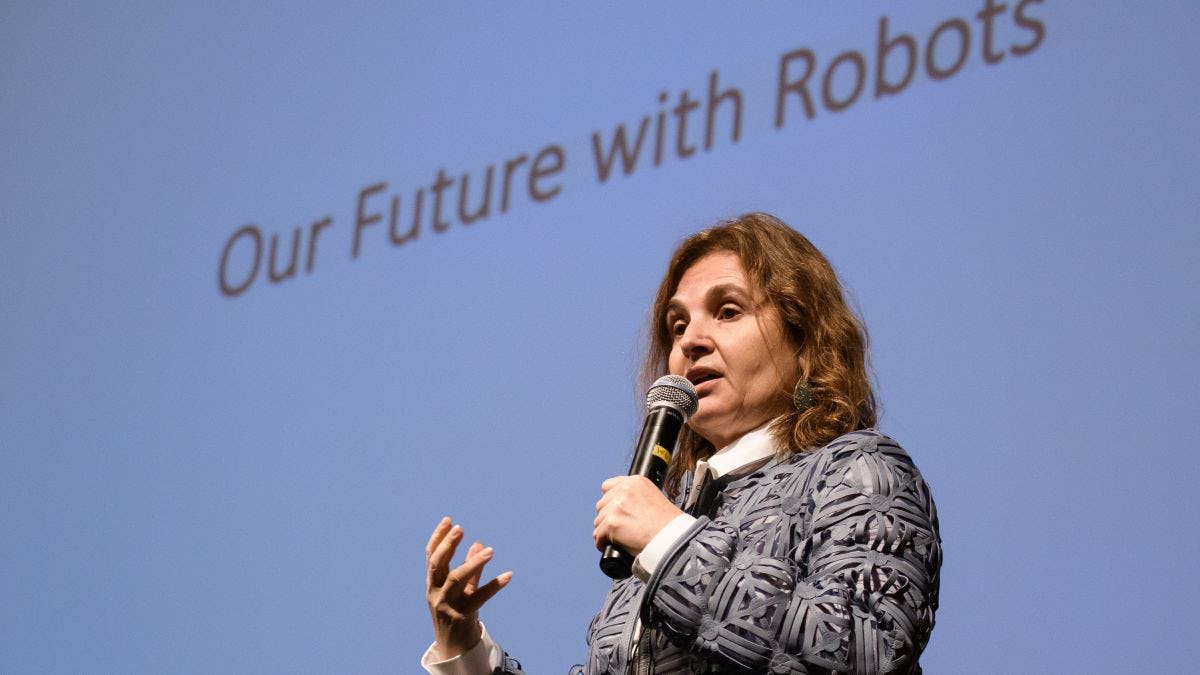 Imagine a future where pervasive robots act as personal assistants to help you get ready in the morning, or as sous-chefs to help you prepare dinner, a future where autonomous flying cars are connected to road infrastructure and surgery is performed without incision or pain.

Sound like an episode from the 60s cartoon series The Jetsons?

Yes, but those scenarios will become reality sooner than we think, according to renowned robotics and artificial intelligence (AI) researcher Daniela Rus, the 12th speaker in the President’s Distinguished Lecture Series at Stevens Institute of Technology.

Rethink what a robot is, rethink the materials from which we make robots, as well as the shapes and functions that a robot can achieve.
Dr. Daniela Rus

Rus, Andrew (1956) and Erna Viterbi Professor of Electrical Engineering and Computer Science and Director of the Computer Science and Artificial Intelligence Laboratory (CSAIL) at MIT, delivered an inspiring lecture titled “Unleashing Your Inner Maker” that challenged the audience in Stevens’ DeBaun Auditorium to rethink conventional notions of robots and imagine the limitless possibilities that could arise from the ability “to create the machines that can help save lives, improve the quality of life, or transport us to places we cannot go to on our own.”

Earlier in the day, Rus was a special guest at the official launch of the Stevens Institute for Artificial Intelligence (SIAI). The new institute will build upon existing AI and machine learning research at Stevens and involve more than 50 faculty members.

“The launch of SIAI is visionary, and it is a privilege to be at Stevens for such a momentous occasion,” Rus said.

It started with AMOUR

Rus began the lecture by describing her first robot, AMOUR (for Autonomous Modular Optical Underwater Robot), which was inspired by her childhood fascination with the underwater world of Jules Verne and the movies of Jacques Cousteau.

AMOUR, she recalled, moved gracefully in water and could take beautiful pictures and transmit video directly to a desktop. It had taken Rus and her research partner three years to build AMOUR. When it was lost at sea after an experiment off the coast of Singapore, Rus was “devastated.”

Undeterred by that heartbreaking experience, she and her research partners improved upon the original AMOUR and created three new copies in just two months.

During tests of those copies in the water, they asked themselves: “What would the children of AMOUR look like?”

The answer: SoFi, a soft underwater robot that looked and moved like a real fish and was capable of changing swimming direction at a speed on par with a real fish.

To create copies of SoFi, a far more advanced underwater robot than AMOUR, it took just two days in the lab.

“Great failures lead to great lessons:  In science, the first instance takes a long time to make. Subsequent copies benefit from prior knowledge and become easier to make.”

Creating robots that can transform themselves

That dramatic reduction in the development time from AMOUR to SoFi was possible thanks to the digitization of practically everything in our society, Rus pointed out.

The mobile internet, the automation of knowledge work and advanced robotics, for instance, will lead to technologies that will make it possible for anyone to design and fabricate robots, Rus noted.

What’s more, she continued, one can imagine a system where robots one day make themselves. To elaborate, she displayed a robot that begins as a piece of plastic, but when exposed to heat grows into a full-blown three dimensional machine that can move around, avoid obstacles, and move in different types of environments.

For robots, form and function go hand in hand

The form and materials associated with robots developed over the past 60 years – humanoid in shape, rigid in material, and maybe attached to wheels – have shaped much of what we perceive as "robots" today. But it is actually nature and the built environment that we should look to for inspiration, advised Rus.

“Rethink what a robot is, rethink the materials from which we make robots, as well as the shapes and functions that a robot can achieve, because as we’ve observed at the beginning [of the lecture] the form of the robot impacts the kinds of tasks it can do.”

To illustrate, Rus then demonstrated the application of a small "origami" robot to perform a surgical procedure when a person, most often a child, ingests a button battery (which can lead to serious injury if left untreated). Squeezed into pill form and iced, Rus says the origami robot, after it is swallowed, can be activated to retrieve the button battery from a person’s stomach.

“When the robot gets to the stomach, the ice melts and the robot can be directed, using external magnetic fields, to pull out the button battery. Afterward, the robot could serve as a patch for the wound created by the battery. Or the robot could deliver medicine very precisely at the location inside the stomach.”

Another important feature of this robot: it’s made out of sausage casings.

“So it is safe and digestible,” she says, highlighting the importance of recyclable materials. “The ability of robots to recycle themselves will be critical if we’re going to make a world with many different robots. We have to keep in mind the impact on our planet when creating waste.”

A world with pervasive robots will require easy interactions between machines and people, and the next 60 years will be about creating “adaptive reasoning robots” that can adapt to humans rather than the other way around, Rus added.

“Right now we have the ability to use our technologies, coupled with interesting interfaces, to enable much more extensive capabilities. And while, today, we can begin to use natural language to program machines, how far can we go in connecting us directly to the machine?”

It’s a question she hopes students, like the ones sitting in the audience at DeBaun, will help answer in the near future. 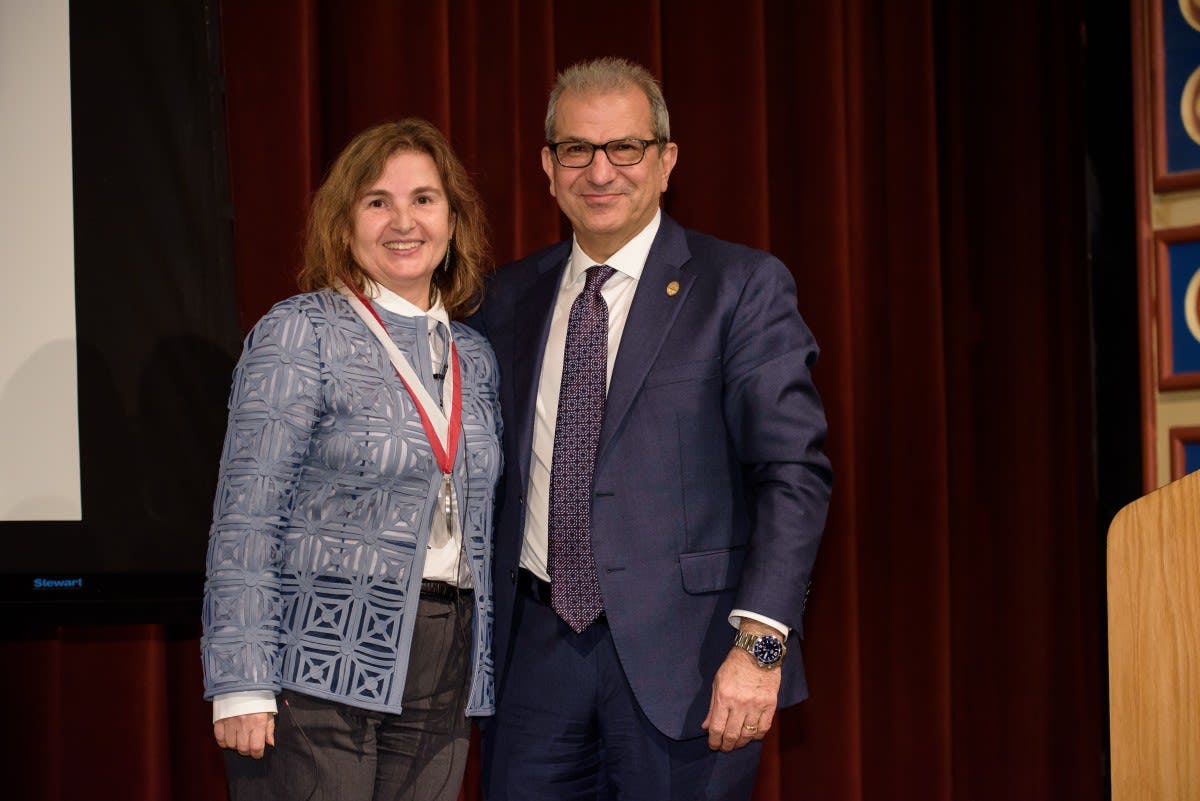 After a Q and A session with the lecture attendees, President Nariman Farvardin presented Rus with Stevens' President’s Medal, the fourth to be conferred on campus at Stevens, in honor of Rus’ leadership and significant contributions to robotics, artificial intelligence and data science.

As an additional tribute to Rus on behalf of the university, President Farvardin announced that a deserving and talented incoming freshman student would be selected to receive a scholarship named in Rus’ honor next fall.

Join us in the spring for the next President’s Distinguished Lecture on Wednesday, April 10, 2019, featuring Bruce March, president of ExxonMobil Research and Engineering Company.