View from the Top: Scholar Gains Perspective from Diverse Experiences at School of Business 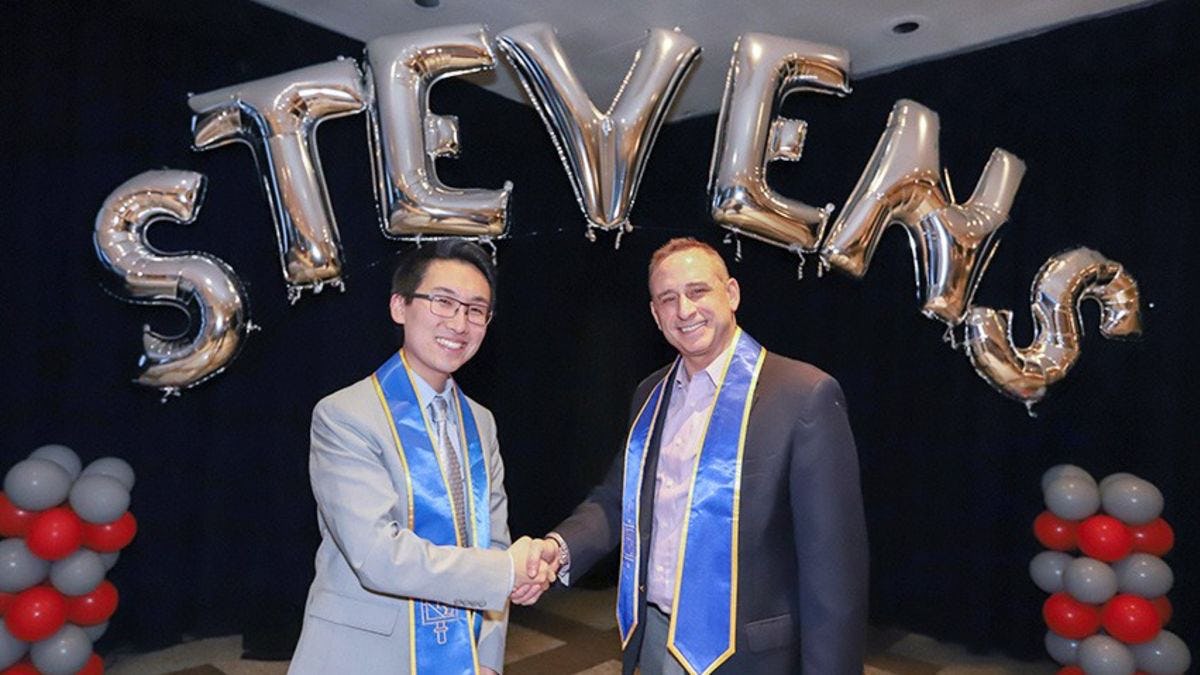 Christopher Liu, pictured here at his induction into the Beta Gamma Sigma honors society, found Stevens offered him a personalized approach to education that gave him the freedom to explore his interests and options.

Christopher Liu ’20 is uniquely prepared for this moment. The Business & Technology major said a “willingness to learn new things” helped him make the most of every opportunity offered to him during his time at Stevens Institute of Technology. From developing learning modules for healthcare systems, to an internship focused on disaster-proofing financial markets, Liu’s diverse experiences have given him the perspective necessary to understand the wide-ranging implications of the current COVID-19 crisis.

They’ve also set him up for future success.

Liu, a Pinnacle Scholar at Stevens, will graduate at the top of the class later this month before starting his career at DTCC, the Jersey City-based clearinghouse where he has interned since last summer. This isn’t his first stint as valedictorian, but he admits the achievement was harder to earn at Stevens.

“I've gotten some flack about my high school career — I was top of my class, but there were only 40 people in the class,” said Liu.

After graduating from Timothy Christian School in Piscataway, NJ, Liu felt right at home within the close-knit community at the School of Business.

“I was looking for a college that had smaller classes and a manageable campus size,” he said. “Coming from such a small high school, it would’ve been a little different to go to a school like Rutgers. When I visited Stevens as a junior, I fell in love with the campus and I fell in love with the business school. Something just clicked and I knew I wanted to go here.”

The personalized experience Liu found at Stevens — where he belonged to Spoon University, the school’s food club, and the Stevens Christian Fellowship — allowed him to flourish as a student. Knowing he had a strong network of professors and peers made it easier to take risks and find support. 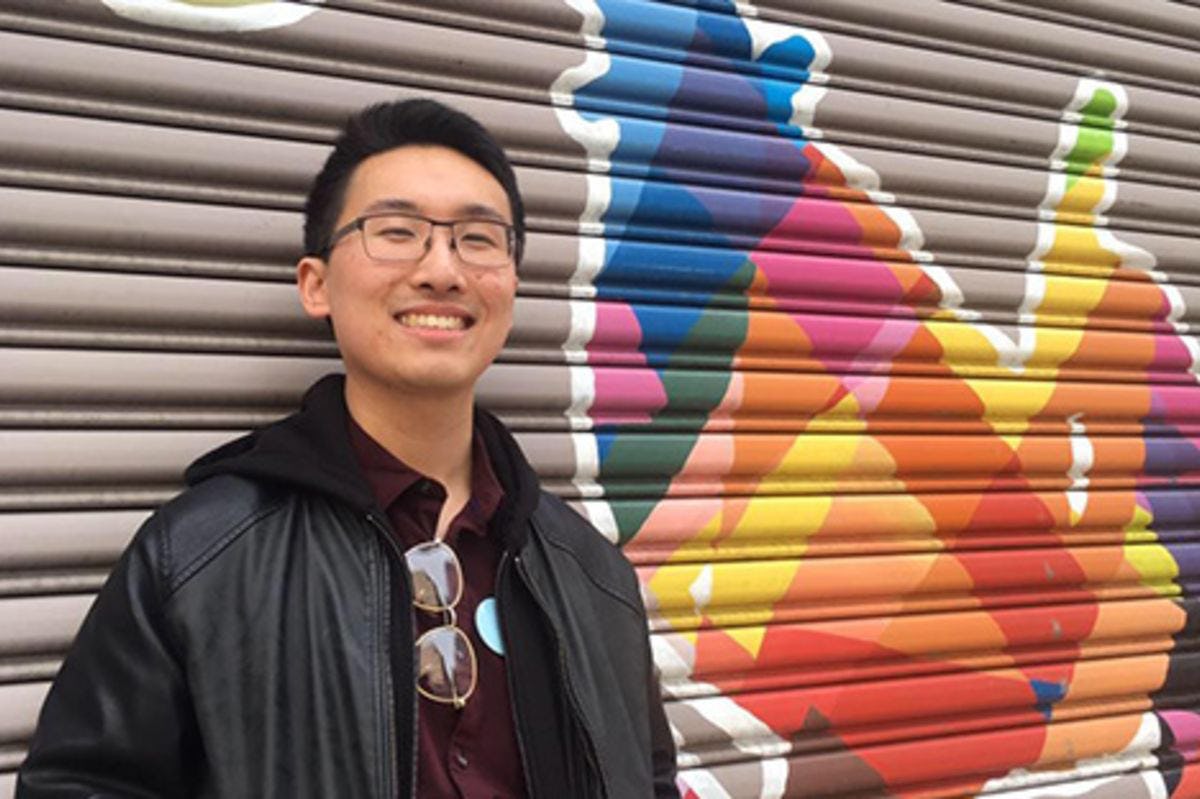 Liu's college experience was colored by his wide array of interests, including a penchant for exploring new cuisines, which often brought him across the Hudson River to New York City.

“The connections that you make here are very genuine,” said Liu. “If you have a question, there are so many people willing to help you, and I think that’s what really helped me succeed at Stevens. I never felt lost. I never felt hopeless.”

Learning to rely on others was one of the most crucial skills Liu said he gained at Stevens, and one that was honed during the group projects that are a staple of business classes. He quickly discovered that the final product is better when everyone contributes.

It’s a concept that he was able to explore further while working on a faculty-led research project, which had a simple question at its center: “Can we collaborate and create the most superior version of something?” said Liu. The project looked specifically at maker culture in 3D printing communities and how a design evolved when people were given the freedom to modify it.

On the surface, this research seems far outside Liu’s general purview, but he found value in experiences that broadened his horizons and introduced him to new topics. That includes the work he did last summer as part of an effort, led by Dr. Donald Lombardi, to develop a series of learning modules used to train staff at Monmouth Medical Center, a safety-net hospital in Long Branch, NJ.

“Whether he is in the classroom applying his zeroed-in focus or working on a Pinnacle project with his peerless integrity of purpose, he reflects great credit on his terrific family and on Stevens,” said Dr. Lombardi, a healthcare leadership expert at the School of Business.

The module created by Liu focused on performance evaluation, which challenged him delve into a new field to better understand how healthcare systems are managed. It also put him in the unfamiliar role of teacher.

“I never really created a module to teach other people, so this gave me a better sense of how to develop something that’s easy to understand and easily digestible,” said Liu.

Communicating ideas effectively will be essential when he starts his full-time position in July with DTCC’s business transformation office. He’ll also benefit from the foundational tech and analytics skills his business classes provided him.

“You can have a bunch of numbers and it means nothing unless you are able to create some meaningful analysis behind it,” said Liu. “That’s one thing my classes have given me — the ability to extrapolate valuable information from data.”

He’s already put these skills to the test during his multiple internships at DTCC. He started with their product management team last summer and was asked to stay on through the school year with their cyber resiliency team, which creates action plans for times of disaster.

“Even if the stock market closes down for five seconds, that could lead to billions of dollars in losses,” he said. “How does the financial market remain stable if a tsunami hits? How do we prevent or mitigate those losses?”

It’s a hypothetical that unfortunately became reality this semester. In the wake of the current pandemic, he’s been able to continue his internship remotely, while also finishing up his classes online. At this point in their college careers, most seniors are ready to leave classrooms behind, but Liu speaks longingly of Babbio Center and the connections he formed within its halls. Still, he knows that his Stevens journey won’t end at commencement.

“I'm proud to be part of this community,” said Liu. “I'm glad that when people ask me about my college experience, I can not only tell them that it provided me with a solid education and great career opportunities, but also the connections and friendships that I've made over the years have made an impact on my life.”