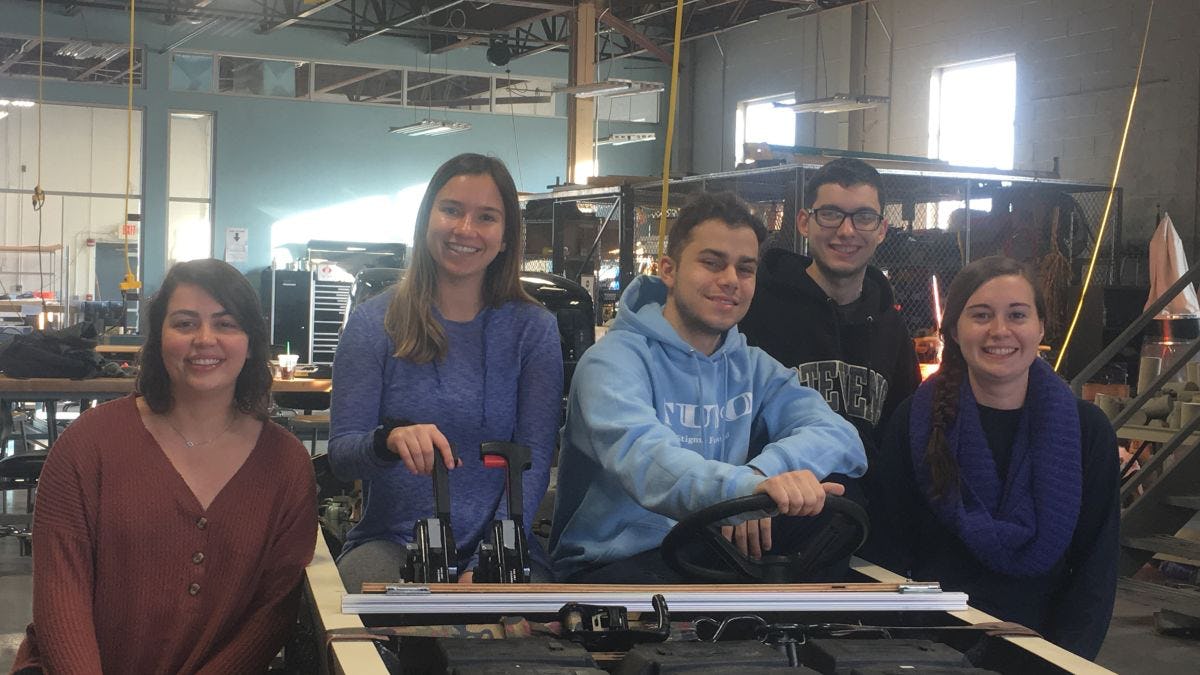 Pioneering technological advances in marine vessels is a storied tradition at Stevens Institute of Technology, dating back to Colonel John Stevens’ revolutionary steam boat "Little Juliana" which utilized a high-pressure steam boiler and twin screw propellers in 1804. Additionally, the university’s founder Edwin A. Stevens was part of a racing syndicate that built and raced the yacht "America" in 1851 to become the first winner of the famed trophy now known as the America's Cup. The university’s Davidson Laboratory, a leader in marine technological innovation since the 1930s, is a proud part of this enduring legacy.

Stevens mechanical engineering seniors Matthew Colacino, Victoria Davis, Meghan Hand, Justin Sitler and Melanie Valentin are continuing Stevens' pioneering tradition by competing in a boat race of their own – representing the university in the annual intercollegiate competition known as Solar Splash, which will be held June 11-15 in Springfield, Ohio. The team is also supported by several underclassmen who are working on independent research or establishing a Solar Splash club.

In 2018, the Stevens team won the Solar Splash Innovation Award, placed first for technical report and finished fifth overall despite increases in performance in two of the three on-water events.

We’ve only been studying engineering for the past four or five years. We don’t have the same level of expertise that people in the field do. We’re walking away from this project having a real-world knowledge and application of subject matter that we’ve learned while we’ve been at Stevens.
victoria davis ‘19

The challenge remains the same this year: to design and construct a solar/electric powered boat to race in a competition that combines high-speed capability, maneuverability and low speed efficiency.

“The solar boating industry is still in a formative stage with typical applications being small boats that use solar to augment a low speed battery-based electric propulsion system. This competition pushes the boundaries of engineering and asks, 'Where are the innovations and new technologies that will open this to a broader implementation?'” Colacino explained.

Team members, all boat-building novices when they began the project, unanimously agree that finding solutions to the challenge wasn’t easy .

“From researching what propulsion was to researching motor drives, we’ve had to improvise as we went along. But we’re here now and have components that are working together, and we’ve built a lot of momentum while creating this final product,” said Sitler.

Now, after almost two semesters of extensive design, building, and procurement of critical sponsored donations, the team has entered the testing phase of what is not only their competition boat, but their capstone senior design project.

Stevens Research Associate Michael DeLorme, the team’s advisor, has served as advisor for the Stevens team since the university's inaugural appearance in the Solar Splash competition in 2017.

"Advising the Solar Splash team has been a joy for me. It has allowed me to tie together my research, technological expertise and passion for boating with teaching and mentoring Stevens students. And I have been blessed with excellent students; this team being no exception. They have taken on the challenging task of developing and designing a new propulsion system and have succeeded beyond my expectations. The team's system will provide twice the power at half the weight," DeLorme said.

Building on past designs and successes 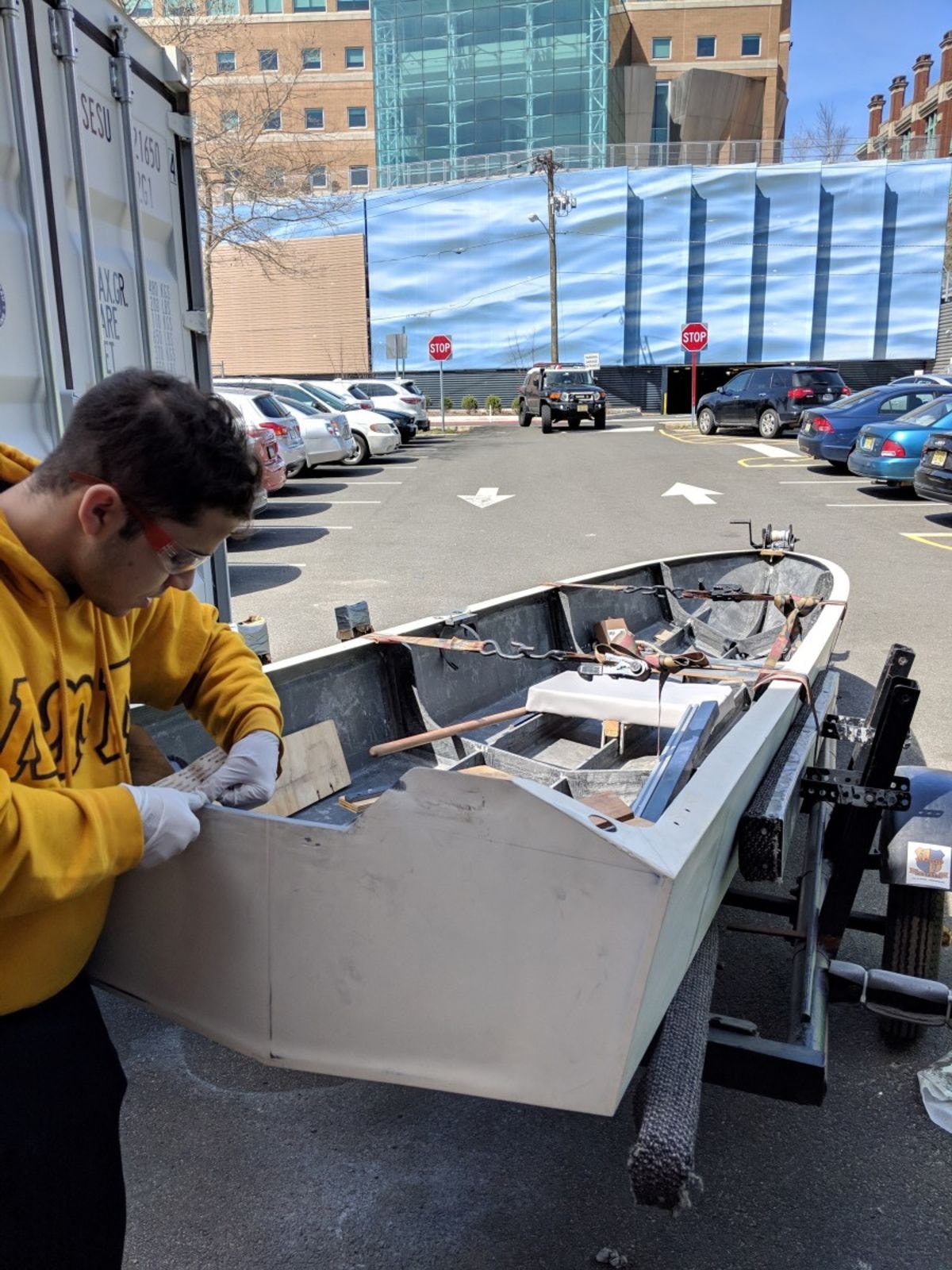 Cutting the transom to accommodate a new outboard unit

“Theoretically you could run indefinitely with the power generated by the solar panels if you go at a slow enough speed. But it’s a four-hour race. And what the solar panels basically provides is extra capacity, or extra energy, to the system in the course of the race,” Colacino explained.

The solar panels are essential to endurance, Davis points out.

Building on the successes and lessons learned from the two previous teams, this year's team received information and advice from students of those teams in designing and constructing the 2019 boat.

The boat’s hull material – a light carbon fiber composite material – also factors into speeds. With a weight of just 55 lbs for a 16’ boat it is an ultra-light weight hull. Also, the team's new propulsion system and other improvements have taken another 100 lbs out of the boat which will make the Stevens boat one of the lightest.

“Being light is a huge advantage because there’s less drag on the boat,” Sitler noted.

Other improvements from last year’s design include an energy management system that takes in data from the solar panels, batteries, motor and other sensors which are then analyzed using a program the team developed in order to help optimize the boat's power settings and maximize performance.

“We found a higher performing motor that can give us even more horsepower than the two motors used previously. We also have a superior lower unit that was donated to us to use in the competition. It’s a custom racing unit, which is something you really can’t find out in the market.”

Being able to test and refine their design in the Davidson Laboratory, Stevens’ renowned marine research laboratory, was no small advantage, according to the team.

“Being able to model test our boat and seeing what the energy requirements and optimum loading conditions are going to be was a huge advantage because we didn’t have to guess in the dark,” said Valentin.

"The lab and the technical team that operate it are assets that are utilized by both industry and government to test and evaluate new designs, improve on existing ones, and support new and novel concepts in almost anything associated with marine operation," DeLorme explained, adding that the team’s ability to work with the lab staff and utilize the facility was not only a technological advantage but an educational opportunity as well.

Whatever the outcome in Springfield, Ohio, team members all agree that their participation in Solar Splash, however intense and all-consuming at times, was one of the most rewarding learning experiences of their time at Stevens. 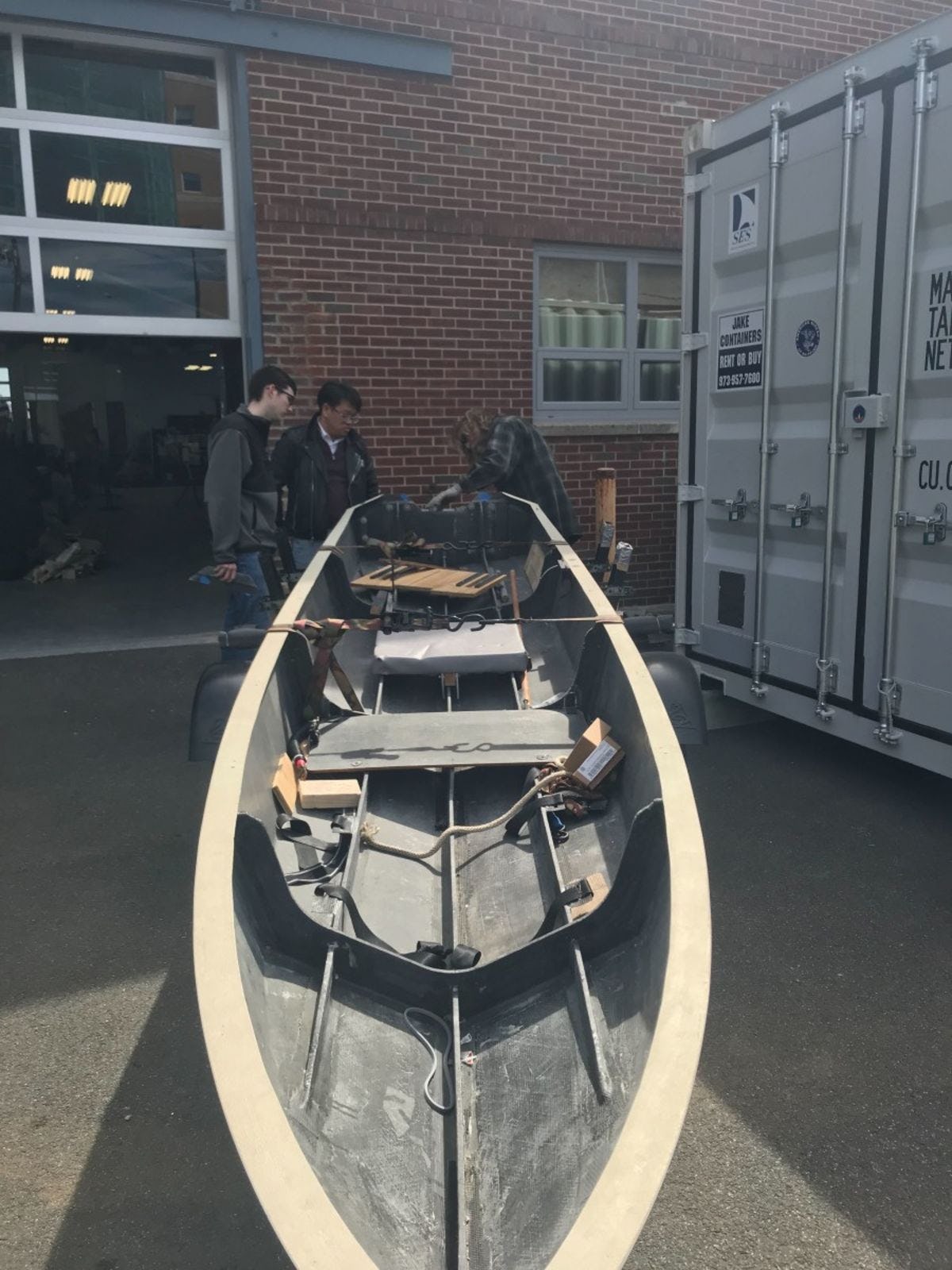 “All of us, we’ve only been studying engineering for the past four or five years. We don’t have the same level of expertise that people in the field do. We’re walking away from this project having a real-world knowledge and application of subject matter that we’ve learned while we we’ve been at Stevens,” said Davis.

“I’ve talked about this project in job interviews. And employers love hearing that students are getting the opportunity to do what we’re doing."

For Colacino, the opportunity to call the shots was not only empowering but one that instilled pride.

“We got to be our own boss. Sure we have people we report and answer to, but the decision-making comes from us. We had basically free rein over the entire project, which allowed the creativity of the group to really shine through. And it makes everything that we’ve done ours. This boat is truly our boat,” said Colacino.

The public will have an opportuntity to see the team's competition boat on campus at the annual Innovation Expo May 3.

To learn more about the project, visit the team's page on Facebook.

Students who are interested in joining the project are encouraged to contact Michael DeLorme at [email protected].