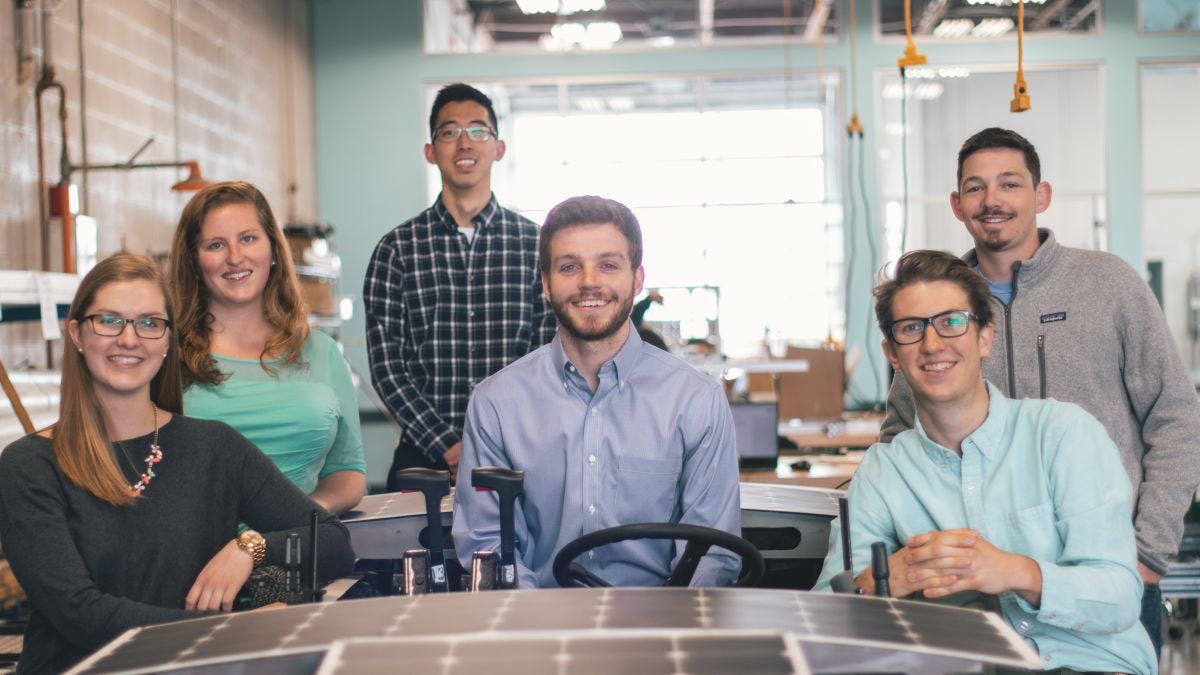 2018 team builds on inaugural design to win even more awards

It was full steam ahead this year for Stevens Institute of Technology's second-ever solar boat team.

Improving on the impressive design of the 2017 team, the 2018 team featured a brand-new boat at the intercollegiate Solar Splash competition in Dayton, Ohio—and brought home their own honors.

"Even a small boat such as this is a complex interconnected system," says Michael DeLorme, teaching professor, senior research associate at the Davidson Laboratory and project advisor. "Its design is further complicated by the competition's strict limits on solar power, battery weight, boat dimensions and the physical differences associated with a vessel’s operational requirements at fast and slow speeds."

The Stevens boat is a planing hull—a design allowing it to operate at the high speeds required for the sprint competition. But the design elements of that hull enabling those high speeds lead to poor slow speed performance, so the team made an ambitious choice to overcome this.

"The team designed, developed and implemented a lightweight, three-foot stern appendage," DeLorme explains, "allowing the boat to operate efficiently at low and high speeds. It was an excellent concept, well designed, well implemented and it worked, earning the team the Solar Splash Innovation award."

The team also customized the propulsion system, "redesigned and reconfigured outboards and propellers to allow for more thrust at higher speeds and more efficiency at lower speeds to go further in the endurance competition and faster in the sprint," DeLorme says.

Their biggest challenge? Reducing the hull's weight by eighty percent. 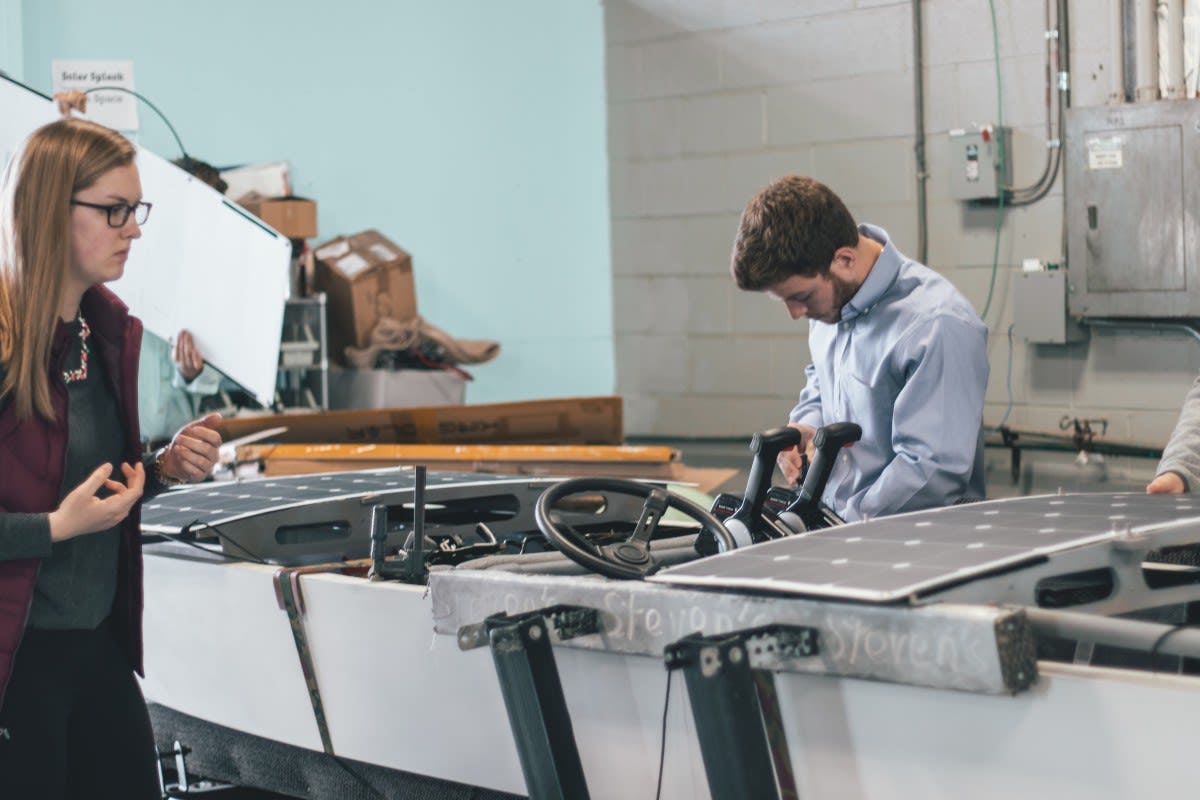 Poor and Pastuzyn work on the hull. CREDIT: Jason Lai.

"Last year, Viking generously donated the expertise, time, facilities and materials to build the team’s hull. It was an extraordinary gift that truly enabled Stevens to get rolling in Solar Splash," DeLorme adds. "However, the hull was built to commercial yacht standards and was heavier than expected, so reducing its weight was a priority for the 2018 team."

It was such a priority for them that team captain Sara Poor took the challenge on personally.

"She decided to build a new hull rather than lighten the existing hull," says DeLorme. "When she broached the subject, I was skeptical and tried to steer her away from it because of the immense effort required and the time commitment of Stevens students. Her father is an artist with a workshop in Rhode Island, and they called on the expertise of family friend Henry Elliot, a preeminent expert and educator in the field of composite boat building. She persisted, I relented—and she proved me wrong."

"For many reasons, but for this one in particular, I'm very proud to be associated with them. They tackled a very challenging task. Every student on the team played some role, as did the entire Poor family, and they made it happen," says DeLorme. 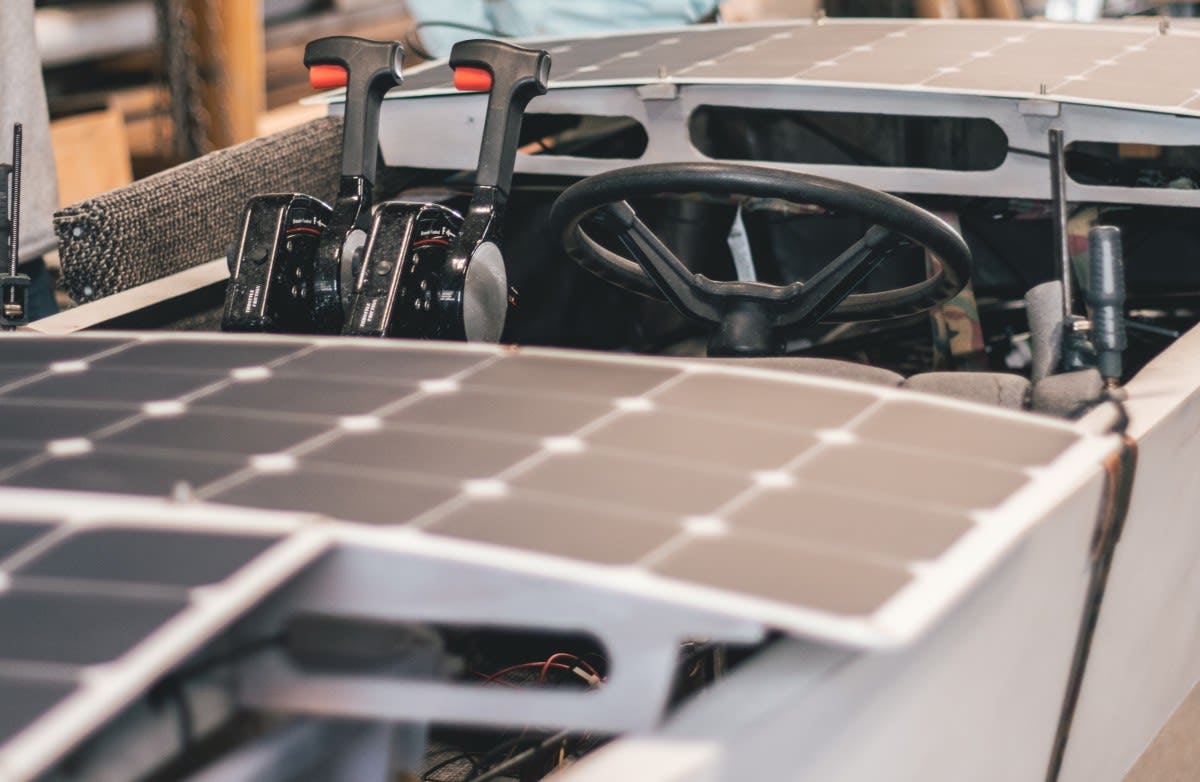 "I had built canoes and kayaks, but I was actually scared of motorboats," says Poor, who is now working as a manufacturing engineer with industrial 3D printer Markforged in Watertown, Massachusetts. "But I like the boating industry, and I was eager to take the learnings from last year's team to rebuild the boat."

"We spent months learning about composites and building, and I felt confident. But the night before our first launch at the Lake Hopatcong Yacht Club, I had nightmares the boat would sink. When we finally saw it floating beautifully on the water, it was amazing."

Also amazing was the team’s 2018 Solar Splash performance. The full team attended, with Poor skippering the endurance event and Lassi handling the sprint and slalom. In addition to its innovation award for the stern appendage, the team earned first place for its technical report, and came in seventh place in the sprint event, sixth in the slalom and endurance and fifth overall. The sprint and endurance scores each marked a ten percent improvement over last year's team's results. 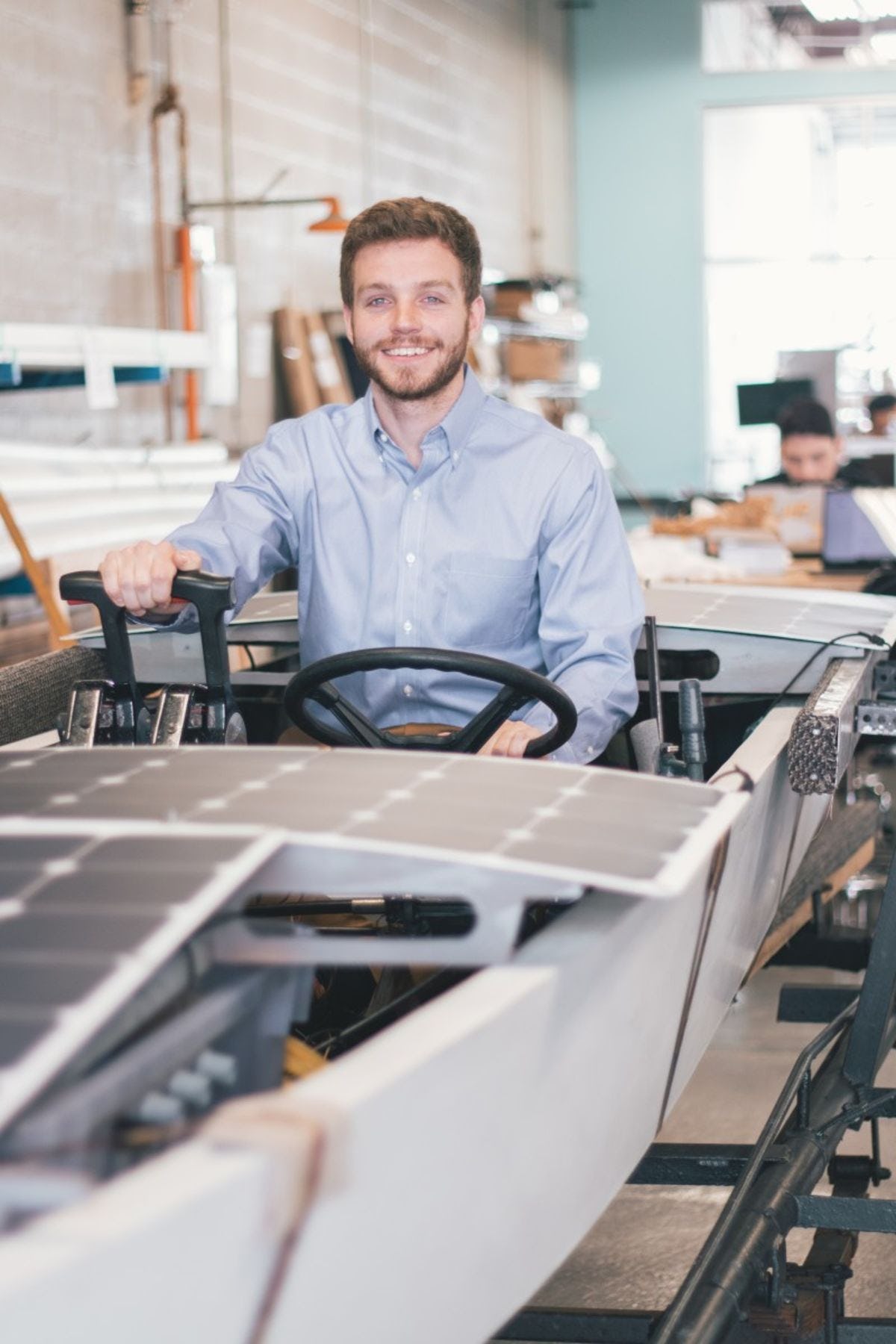 Perhaps the most valuable win, though, was the multidisciplinary experience the students gained.

"This project allowed me to see outside of mechanical engineering. I got to see the whole engineering cycle including design, building, testing and demonstrating the system's functionality," Poor says. "We also learned about teamwork and working with colleagues in different disciplines, which prepared us well for working in the real world."

"Professor DeLorme's time and passion helped us keep going through the challenging times to make this project a success. Of course the professors are experts in their fields, but that interest in students is where Stevens’ professors really excel."

In addition to that personal, dedicated attention, Stevens also had other resources to help the team succeed: the Davidson Laboratory.

"The Davidson Lab research staff and faculty helped the students understand and improve on the vessel's performance," DeLorme says. "They had access to the world-renowned towing tank, which was great for testing the hull's lighter weight and its performance with and without the stern appendage. With the lab's digital cameras, the students were able to watch the boat underwater to study the flow in different conditions. The Davidson team also fabricated the stern appendage model and the appendage itself and supported the team's extensive travel."

The solar boat project will continue for the 2018-19 academic session. Poor strongly encourages all interested students to join the team. "Even if you're not a senior, get involved!" she says. "I enjoyed this project a lot, and I can see myself helping future teams. I wish I had gotten involved earlier. The team could accomplish so much more if it included freshmen, sophomores and juniors who could see it through for several years."