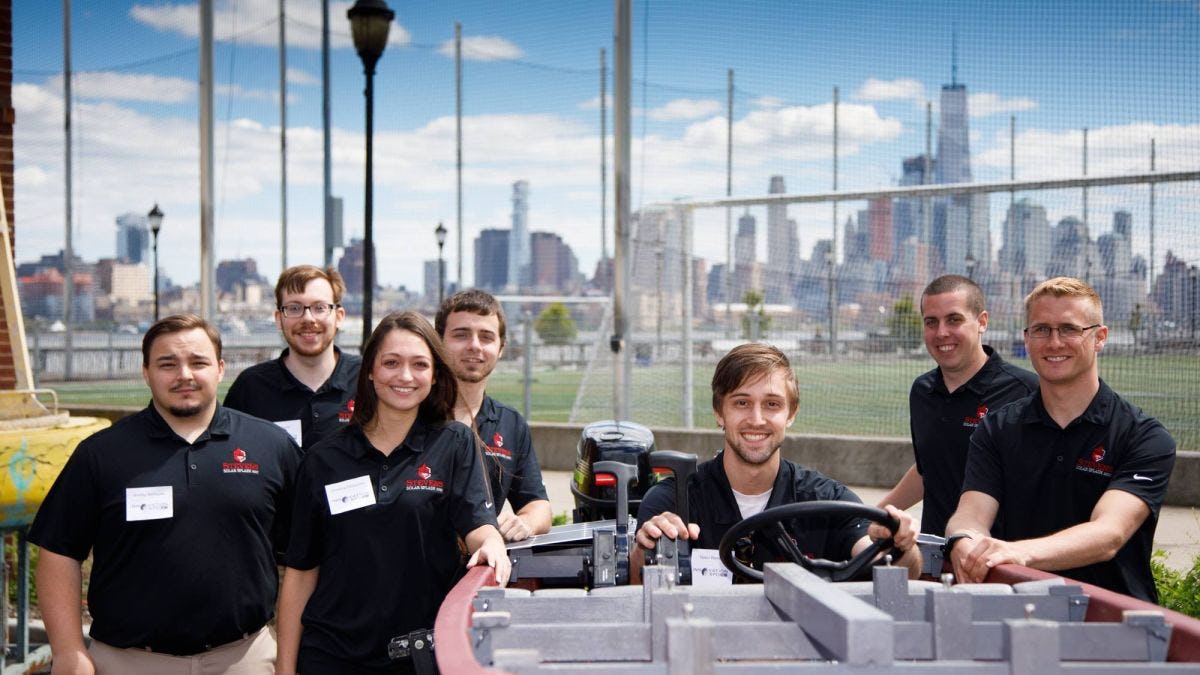 That’s a great showing for any team. Especially a rookie one.

Swanton and Swain were naval engineering seniors at Stevens Institute of Technology. They’ve graduated now, but built their entire senior year around this project. “Most naval engineering projects end up being computer design related rather than anything you actually build—mostly because it costs so much,” Swanton explained. “We wanted to build something we could interact with.” Advisor Michael DeLorme suggested Solar Splash, and they recruited mutual friend Mason Riemer, as well as Brad Applegate, Leo Wortman, Jesse Squier and Christina DiGiacomo—all of whom were mechanical engineering students—to help them. Then the team got to work building a competition-ready boat.

“We knew we all wanted to go to competition,” Swanton explained. “We didn’t want to do half the work and not be able to go. We also didn’t want to end up in last place. So we knew going in that it was going to be tough and there was a lot of work we needed to do.”

And they did it. 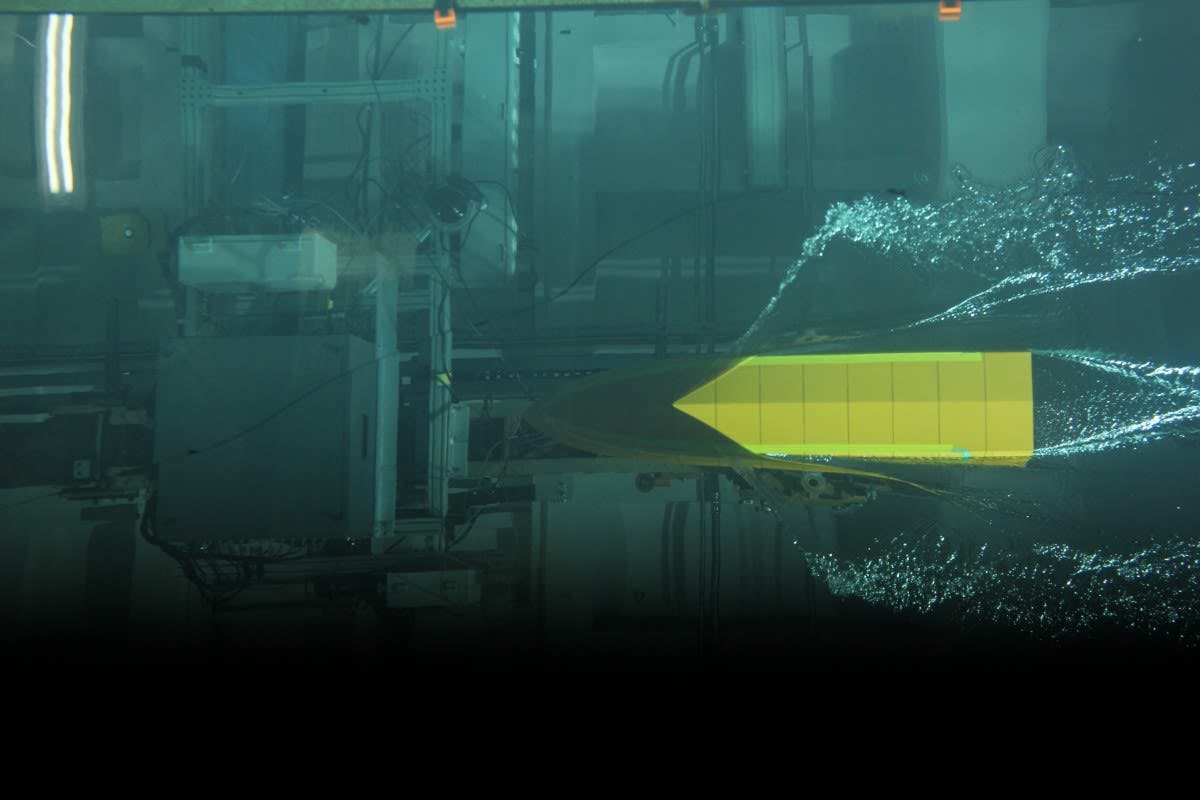 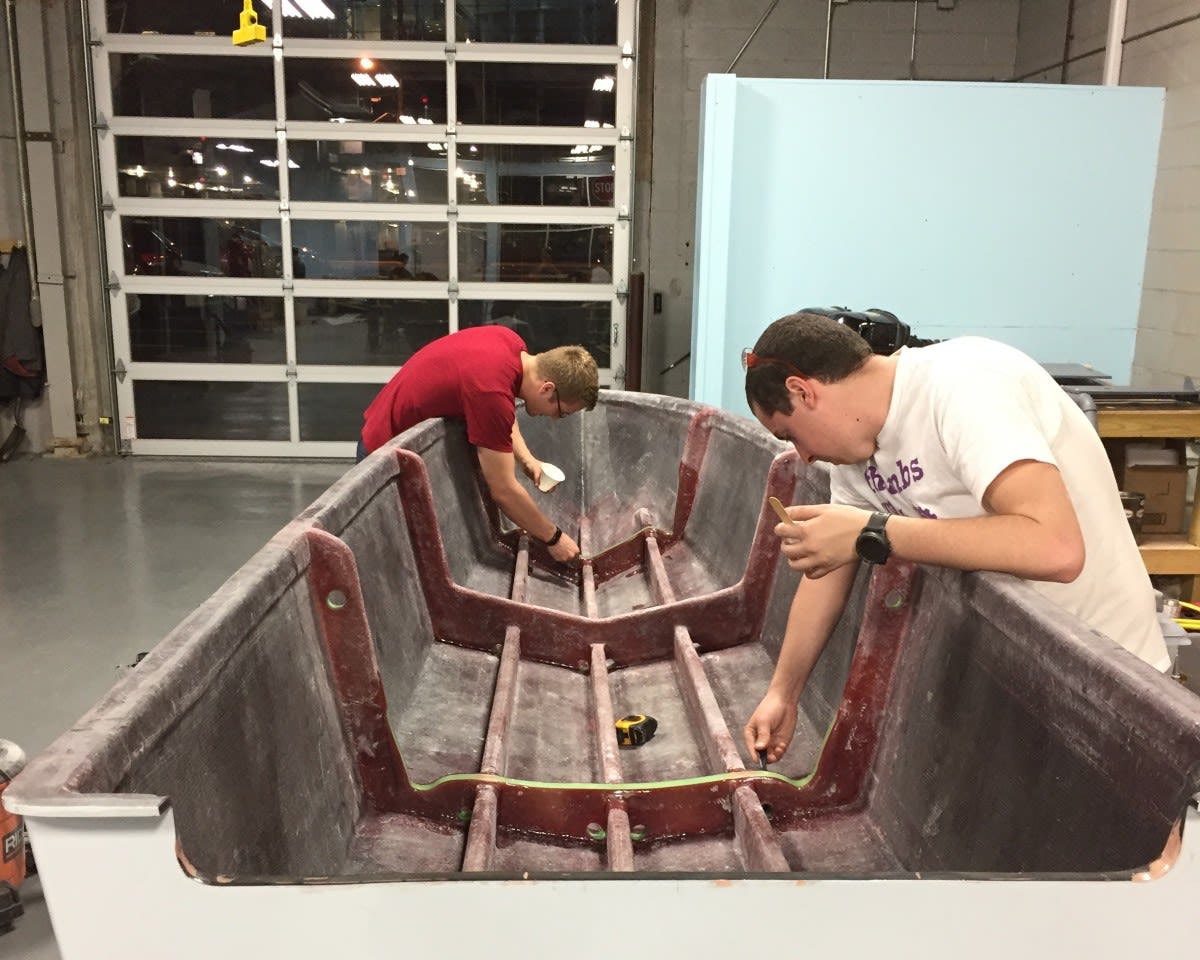 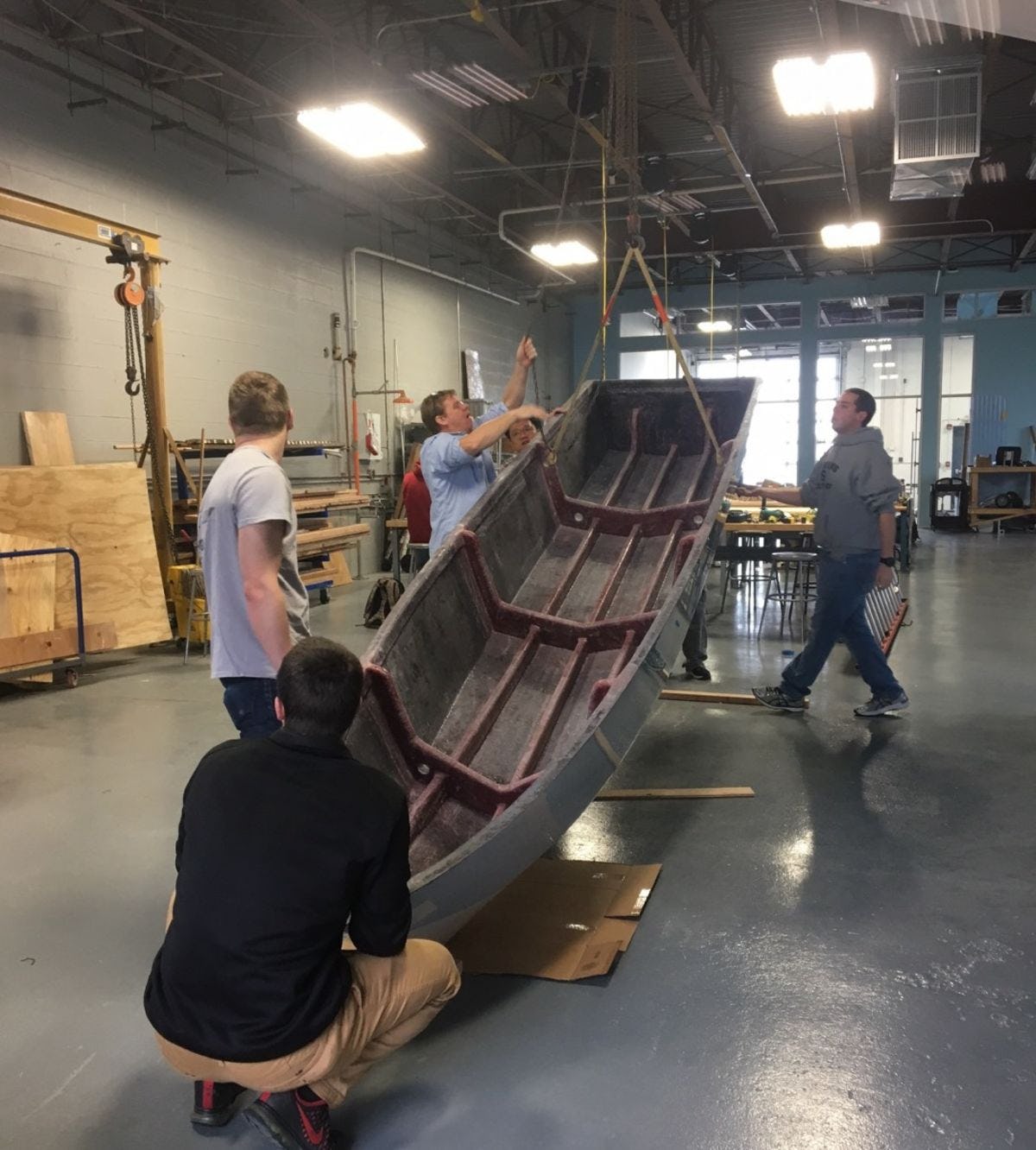 Swanton and Swain focused on the hull form, structure and getting power to the water. Reimer worked on power management and systems integration. Applegate, Wortman, Squier and DiGiacomo focused on the solar system and propulsion. “A few of us spent upwards of 50-60 hours a week on this,” Swanton said, “and it was mainly because we had this drive to win. We knew we probably weren’t going to, but we really wanted to go to competition and have people astounded by what a rookie team could accomplish.”

The team was able to meet that lofty goal by testing and refining their designs at the Davidson Lab. Swanton, who’d been trying to get into the lab since he got to Stevens, was especially grateful for that:

We wouldn't have been able to create something so unique and so engineered without Davidson Lab. We wouldn’t have been able to have any sort of prediction of how we’d perform otherwise. Our tests in the lab made us confident enough to compete with teams who’d been doing this for five to ten years. And it demonstrated enough performance potential to secure funds from Stevens to travel to the competition.

“We knew we wanted to utilize the one thing that no other school has,” Swanton said, “and make it our biggest advantage as a rookie team.” 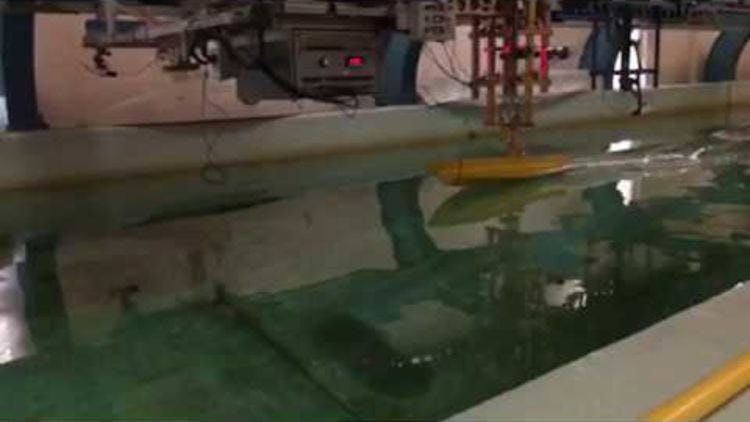 Still, building and testing the boat was only part of the battle. The next challenge the team had to accomplish to viably compete was to secure enough sponsorships to provide parts and technical expertise. “Getting sponsors was a lot of work,” Swanton said. “We called any company involved in the industry,” Swanton said. Their first call was to Viking Yacht Company, where both Swanton and Swain had interned. Viking responded graciously, offering help in manufacturing the custom hull design as well as guidance on lamination and structure. “They were graciously willing to get involved,” Swanton said. “That's how we were able to get such a nice hull.”

After that generous donation, Reimer and the rest of the team pitched in on the phone calls. In the end, the team got generous donations of time, materials, technical advice and even encouragement from many industry leaders. Elco Motor Yachts provided two motors worth $3,000 each, a gift that was both generous and impossible under any other circumstances because, according to Swanton, “there’s no way we could have procured that much in funds from the school for this one project.” Zahn Electronics Inc. provided DC/DC solar converters, technical advice and even last-minute support. “Their CEO was on call all weekend during the competition,” Swanton said. “In the two hour break between our heats, we asked him about converting power into our solar battery. He gave us guidance that definitely helped us perform better than we would have otherwise.”

All in all, the team received almost $50,000 in equipment, materials, fabrication, expertise and time from almost a dozen sponsors. They’re grateful for each and every one, as Swanton explained:

I was astounded by how much support we were given, and how much people were willing to help us. It wasn’t just monetary or product donations... a lot of these people spent a lot of time on the phone with us going over technical details and systems, helping us understand what was going on. For these companies to take the time to help us learn these systems and make the best choices for our project was another huge point about donations that people don't really see.

Thankfully, all that hard work and support paid off during the competition. While only Swanton, Swain and Reimer were able to go to the competition, the team designed their systems to be “simple enough for only three people to operate in 30 to 45 minutes, which was a lot faster than any of the other teams there,” Swanton explained. That smart bit of planning allowed them “to relax within the time constraints.”

It also allowed them to rack up a bunch of awards: 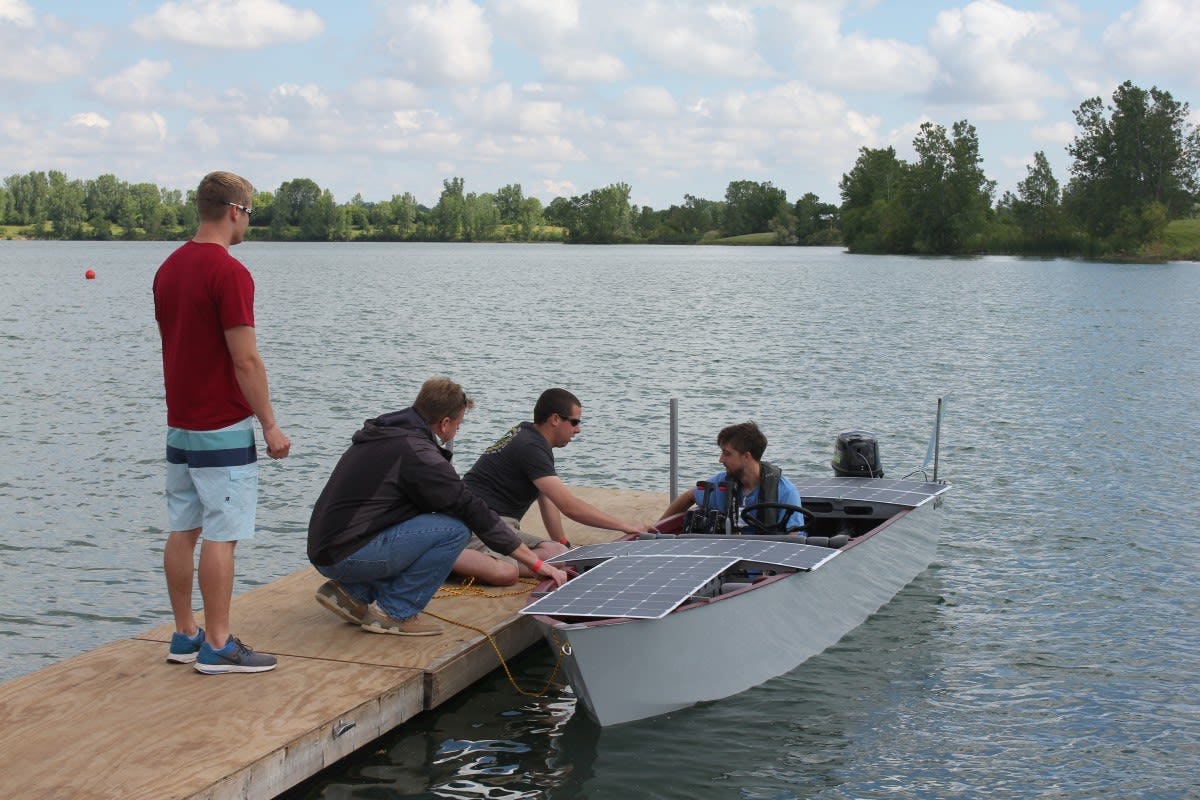 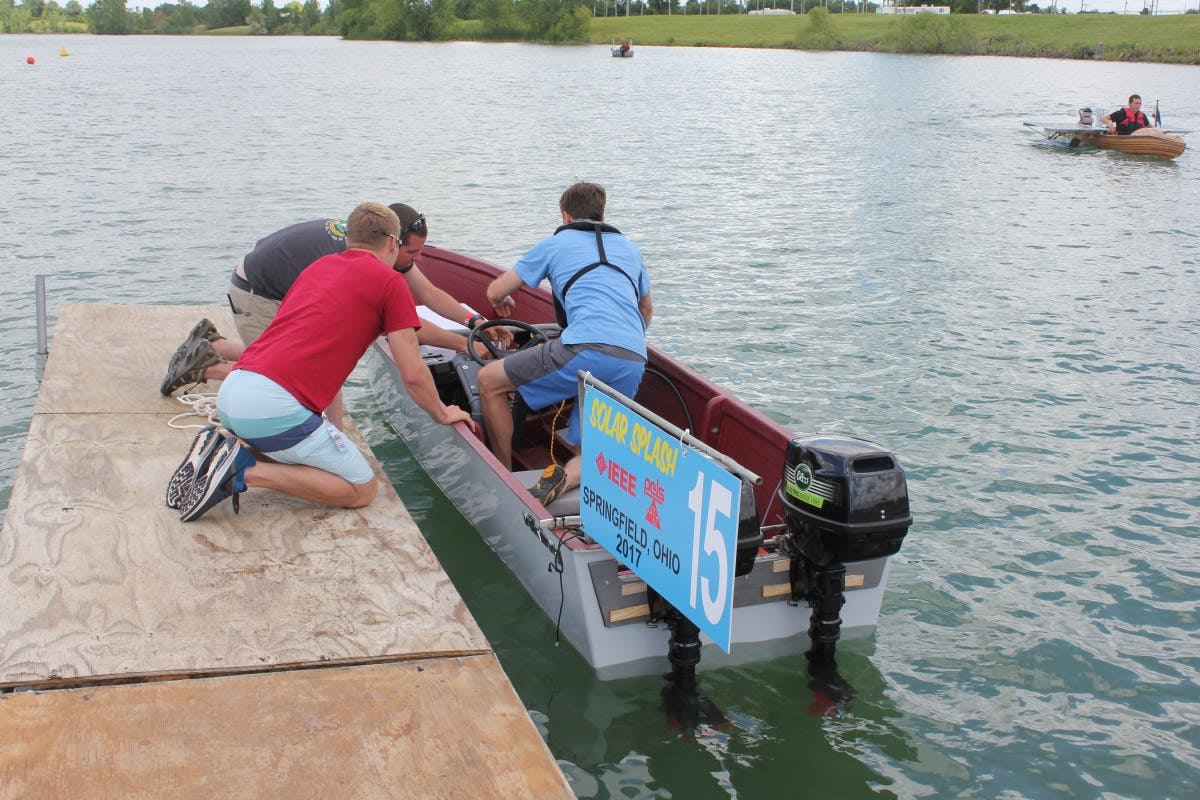 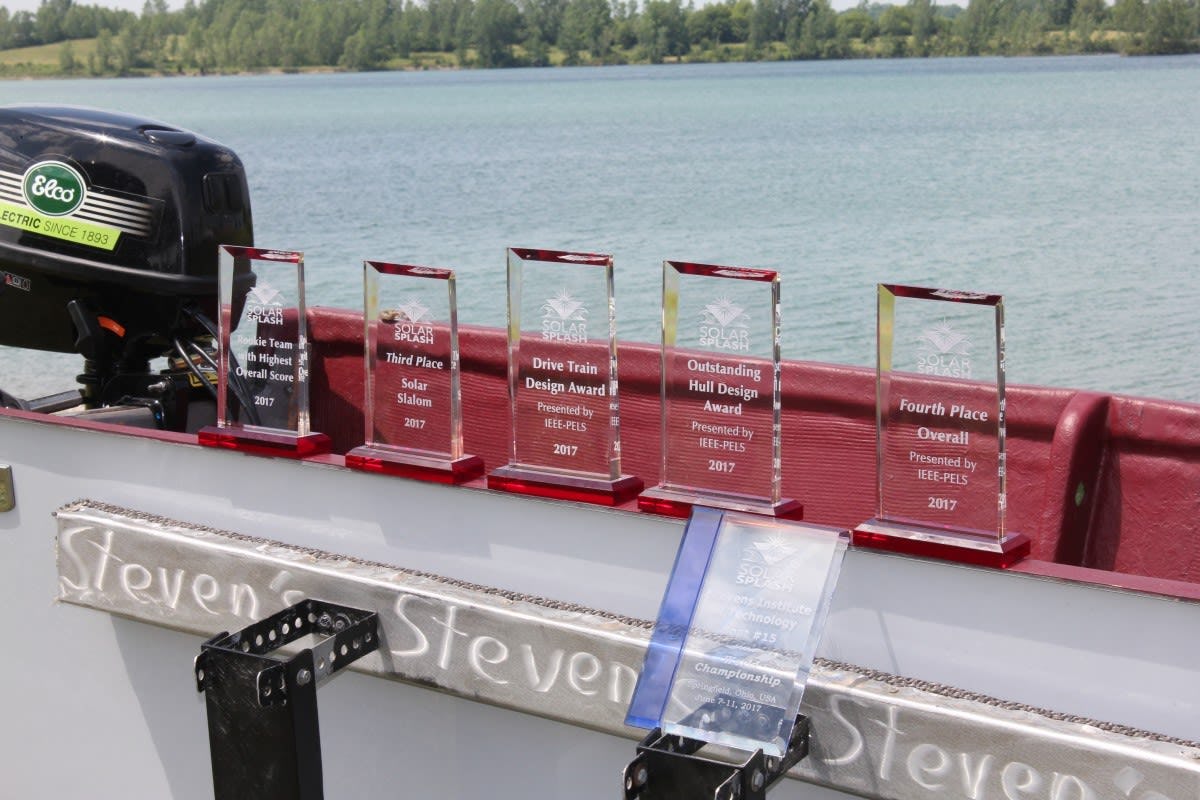 The team was proud of themselves and their achievements. So was DeLorme. “It was a thrill to be involved with this project and an honor to be able to work with this team,” he says. The team also won an award for highest score for a rookie team, which they were told was “one of the highest ever,” Swanton said. The team’s win for outstanding technical report was also rare for a rookie team—but Swanton attributes that to “all of the technical reports we’ve had to do for our classes here at Stevens.”

This team was starting from scratch and knew they had design, development, fabrication, and testing of an entire boat and all subsystems in front of them. They were also aware that they had to come up with sponsorships and donations that would enable them to not only get to the completion but compete at a high level. They accepted the challenge, dedicated themselves to the tasks, and succeeded beyond what anyone could have expected. Seeing the outcomes of their yearlong efforts, excellent performance at the competition, and level of professionalism and sportsmanship they displayed at the competition made me proud to be part of the Stevens community.

While the team has graduated, and Swanton will be working for General Dynamics: Electric Boat, they still have plans for how to improve the boat’s chances in next year’s Solar Splash. “We have a great setup, but one of our biggest problems is that we were too heavy,” Swanton said. “Next year, we’d like to do weight reduction on the hull. If we do that one thing, our performance improvements would be quite large.”

He’s also a fan of having juniors on the senior design project team. “That would give us an overlap of team members in the future,” Swanton said. “It would also give newer team members a better idea of what to expect on competition day.”

As much as Swanton is eager to improve the design, the has set a high bar. “They set a very high bar for future Stevens teams,” DeLorme says, “but they also left behind an excellent platform to work from. I’m confident that with the right mix of students next year we can improve the boat’s performance and come back with another round of honors—and, hopefully, the Solar Splash Championship trophy.”

In the end, impressive as this achievement was, Swanton knows he couldn’t have done it without his experiences at Stevens.

I think Stevens teaches you how to think well—how to think about a problem, how to put solutions together. Stevens also helped us when we spoke to companies about sponsorships. We were able to relay technical information to them in a way that showed we knew what we were talking about.

Overall, “it was a great time, a great project, and I’m glad it got approved for funding next year. Me, Austin and Mason have plans to come back and offer support and guidance for the new team. We can’t wait to come back next year!” 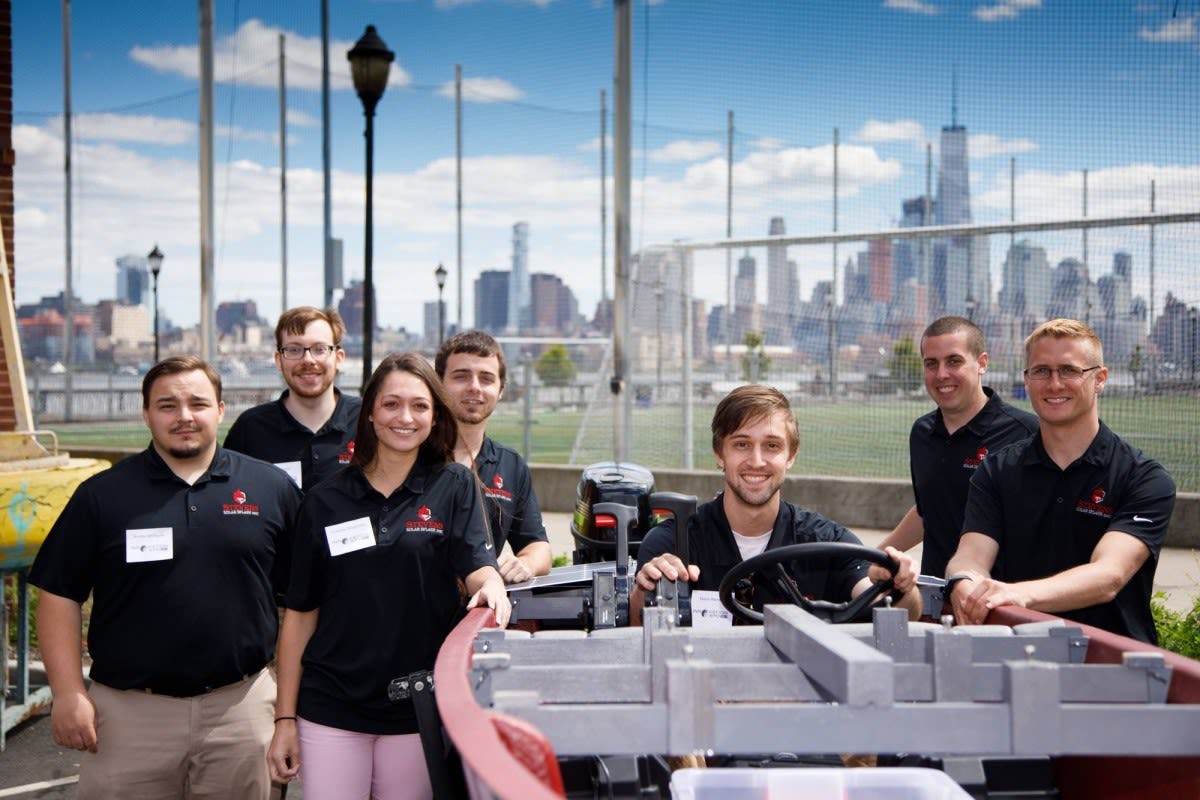