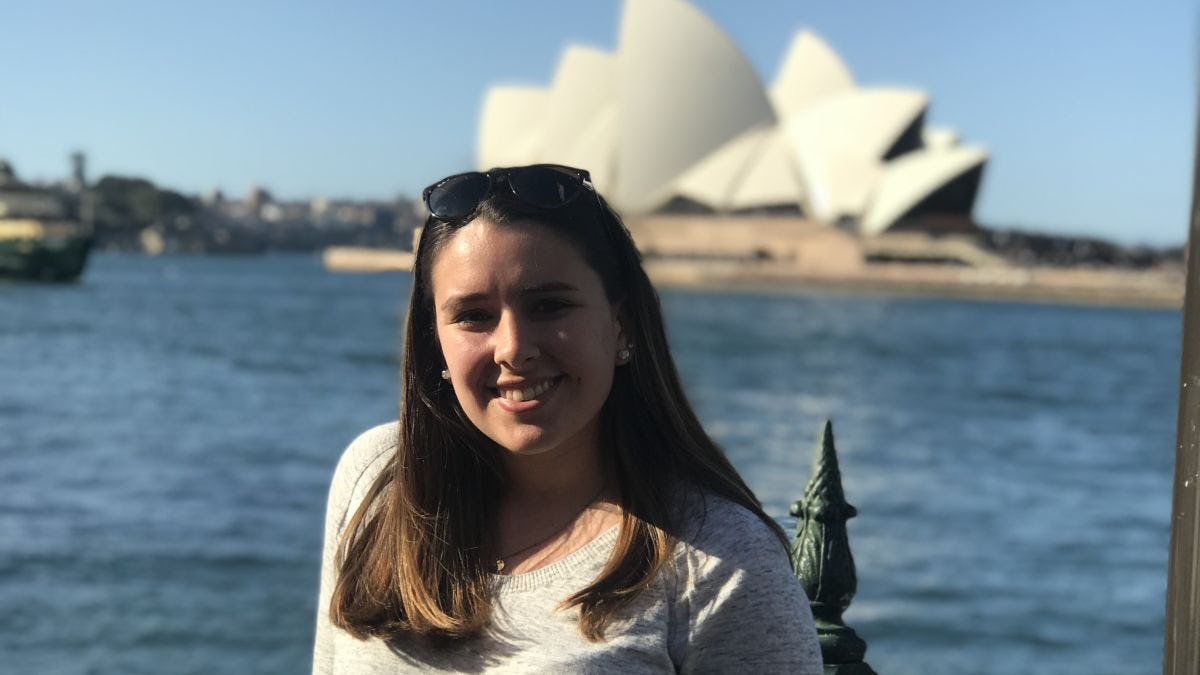 With some direction and guidance from the university’s career center staff and office of international programs, she found the perfect opportunity on the other side of the world: at Bespoke Medical Innovations, a startup that specializes in custom medical products, based in Australia.

Working in the company’s ApneaSeal division, which designs and produces individualized 3D printed masks for customers suffering from sleep apnea, McDonald gained an international experience and immersion into the medical products industry over the course of three months this past summer.

“It was the best of both worlds – experiencing another country’s culture while gaining professional experience – and I loved every second of it."

From Hoboken to Sydney: embracing a new city and new opportunities

Although this was a “summer” internship, McDonald had to adjust to the cooler temperatures and shorter days of winter down under. The West Orange, New Jersey native is used to big cities. After all, New York City looms large across Stevens’ Hudson River location. Still, the immense size of Sydney made getting the lay of the land a bit of a challenge.

I have a more defined idea of what my end goal is now that I have real world experience. And I know what’s important in terms of my education and what I really need to focus and work hard on.
christina mcdonald ’20

“Google maps was my absolute best friend, but I got the hang of it. I typically left at the same time and took the same buses to get to work.”

In Sydney, McDonald never tired of the city’s famous attractions such as its iconic bridge and opera house, as well as its signature beach – Bondi Beach – where she went surfing. She also explored areas outside Sydney, including Australia’s other famous city.

“I went to the Blue Mountains which is absolutely breathtaking. I also went dolphin watching in Port Stevens and traveled to Melbourne on my own. It’s a city that is a lot smaller than Sydney with a distinctive personality that I really enjoyed.”

Right from the beginning, she was told by her supervisor that working for a startup company would keep her busy. That certainly held true, she says, adding that anyone seeking a meaningful hands-on learning experience should jump at the chance to work for a startup company.

“Whether it was using photogrammetry and CAD software, learning to code in Python and HTML, making phone calls to customers, or training interns who started two months after I did, I can say I had a hand in just about every part of the business,” she said.

When she interviewed with Bespoke over Skype, she was offered the internship on the spot. McDonald didn’t know at the time how competitive the field was.

“I learned later on from employees there that they actually interviewed a lot of people. So the fact that they offered me the job during the interview was a good sign they felt pretty confident about my qualifications.”

Creating a roadmap for post-graduate success

A natural goal setter, McDonald came to Stevens with clear objectives. With an eye toward a career in the medical field, she began as a biomedical engineering major. But that changed when she proactively tapped into one of the university’s crowning resources – its highly regarded career center. Christina McDonald stands next to a poster at Bespoke that explains the three-step process of producing a customized 3D ApneaSeal mask.

“After my first year, I realized I was more interested in prosthetics. So I sought advice from the people who interact regularly with employers. The career center staff told me that companies in the prosthetics industry usually look for candidates with a mechanical engineering background. So that’s what I ended up switching my major to, with a biomedical concentration.”

In addition to coursework, McDonald knew she wanted work experiences that would set her on the right career path. She also wanted an experience that was global so she attended the study abroad fair, held twice a year on campus.

“There are a wide variety of opportunities to intern or conduct research abroad, as well as the opportunity to apply for a scholarship from the Four Fund, which was specifically created to help Stevens students get experience working abroad,” explained Susi Rachouh, director of the office of international programs at Stevens.

McDonald signed up for an internship program in Australia through Stevens-affiliated CISabroad, eventually applying to Bespoke for a summer internship.

At Bespoke, McDonald received plenty of one-on-one opportunities and mentoring with each of the seven members of the small staff, giving her insight into how the entire company operated.

“I learned from the chief strategist about how they have to present themselves to investors in terms of how much information to share. I also got to see the regulations-side of the business because I was involved in creating a database of all their documentation toward becoming FDA certified.”

She also had her choice of hands-on projects to work on.

“I chose a research project to determine if a smartphone could capture the same perfect resolution photos as the current device they use to take pictures of a patient’s face in creating a 3D printed mask. My supervisor would check on the team’s progress each week but we had a lot of freedom with that.”

At the end of her internship, McDonald says she became more certain than ever about pursuing a career in the medical field and is, in fact, already looking ahead toward her next summer internship.

“I have a more defined idea of what my end goal is now that I have real world experience. And I know what’s important in terms of my education and what I really need to focus and work hard on.”

More importantly, she says, the experience taught her to be open to possibilities.

“What I learned, if anything, is to not limit myself or let fear keep me from trying something because I might end up really enjoying it and that may lead to a great opportunity.”