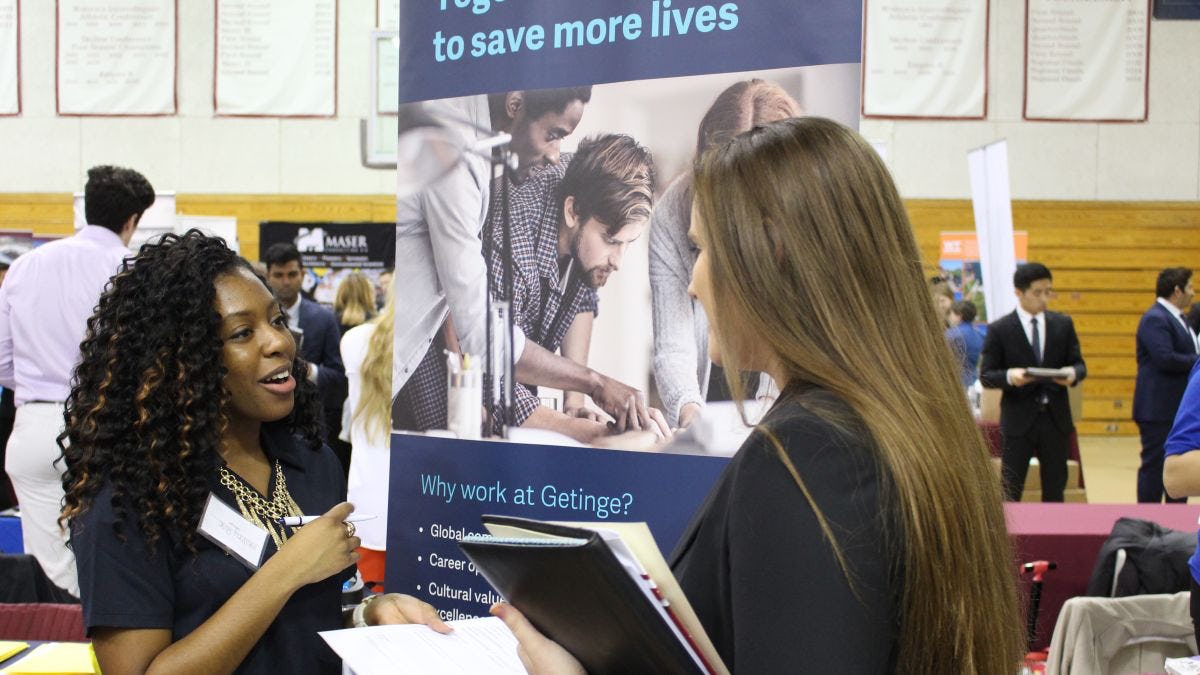 Nearly 115 leading companies, including IBM, Verizon, Nielsen, JPMorgan Chase and Celgene Corporation were spread out across two venues at Stevens Institute of Technology for the university’s Spring Career Fair.

This year the event fell on February 14 – Valentine’s Day – and there were plenty of returning employers who expressed their love for recruiting top Stevens talent.

Fabian Valencia, managing consultant at MTHREE Consulting, was making his fourth appearance at Stevens, but this was his first time as a recruiter for MTHREE, a financial services consultancy that he joined last year. When he learned that Stevens was not on the company’s list of career fairs, he made sure to change that.

“We had to come. Every single person that I’ve hired from this institution have all been great. Stevens students are very technically talented, but also very good at communicating and speaking to people,” he said. 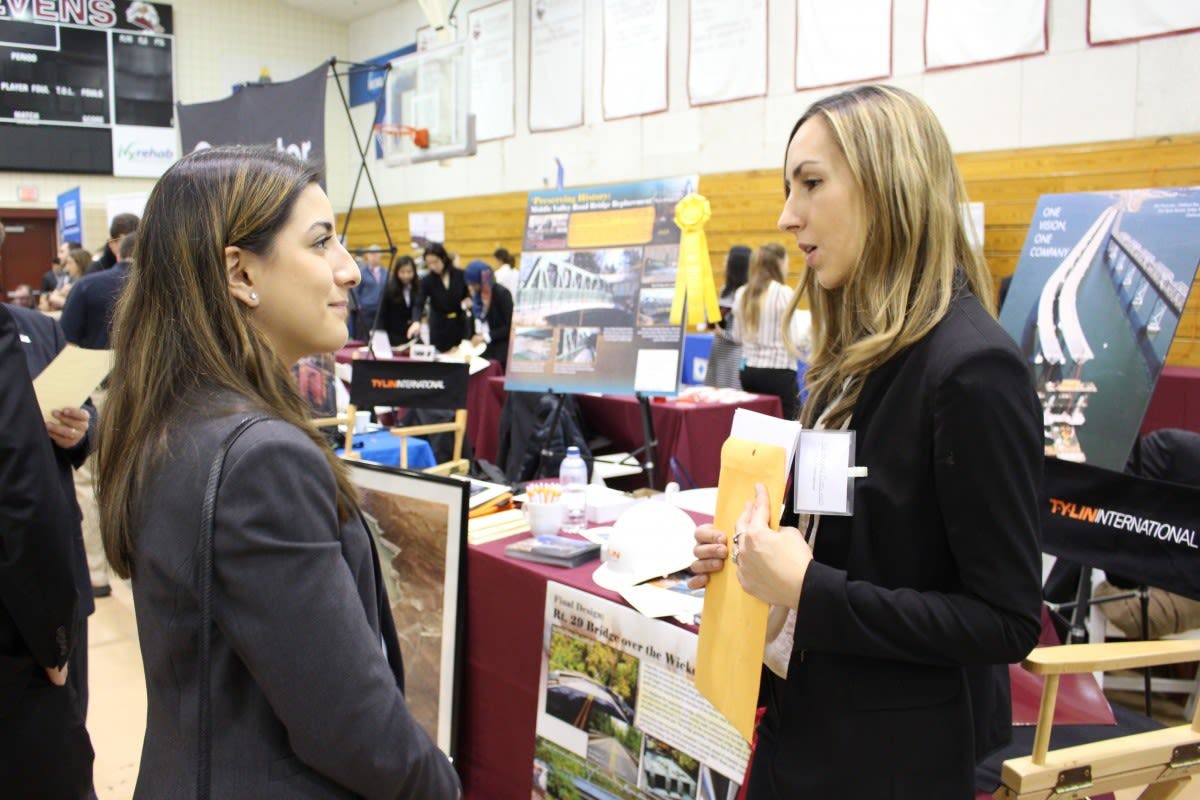 Seeking to fill full-time positions ranging from software developer to business analyst, Valencia described the ideal candidate for his company as someone with technology and finance know how.

“Stevens tends to have a lot of students who possess both. The talent is top notch here and I look forward to coming back in the future.”

“Stevens does a very good job at preparing students to go out into the world,” Huk said. “We’ve had great success with them.”

The repeat attendance of employers, and their ongoing relationship with Stevens, speaks volumes about the high regard they hold for a Stevens degree, says Lynn Insley, executive director of the Stevens Career Center.

That claim was reinforced by the Class of 2017 Outcomes Report, just released by the Stevens Career Center, which showed 96 percent of graduates had finalized their plans within six months of graduation. Nearly 80 percent secured highly competitive employment opportunities well before graduation.

The line between the typical finance student and the typical computer science student is getting blurred. The more you have an understanding of that intersection the more agile you’ll be to move throughout our organization in any capacity.
Joshua Bellos, global head of campus and diversity recruitment, Nasdaq

In addition to career fair events, Insley and the Career Center staff actively work with students to prepare them for the many on-campus recruitment events held throughout the year, including resume writing and mock interviews. Just as importantly, Career Center staff work diligently to build and cultivate employer relationships, says Insley.

That was evident at this year’s career fair. Along with familiar faces, there were new ones, like Joshua Bellos, global head of campus and diversity recruitment at Nasdaq.

The second-largest stock exchange in the world is looking to fill about 20-30 summer internships in the areas of software engineering, data analysis, data science and machine learning, according to Bellos, who added that technology is the driver of the company’s future. Drawn to Stevens’ reputation as a “top technology school,” Bellos was seeking students who are equally adept at technology and finance.

“Those are the students that I think are going to be the best fit for us because as our company moves towards becoming a full tech company, the line between the typical finance student and the typical computer science student is getting blurred. The more you have an understanding of that intersection the more agile you’ll be to move throughout our organization in any capacity,” Bellos explained.

The agility of Stevens students was top of mind for Maia Hadidi ’07 M.S. ’12 , representing Bristol-Myers Squibb. She was among the many alumni representing their employers at the career fair. Now a life cycle manager for the pharmaceutical giant, Hadidi came to recruit for co-op positions within the global supply chain organization of the company. She emphasized that the ability of Stevens students to think outside-the-box and problem solve help them stand out to employers.

“So if they don’t have the exact technical background or expertise, they have the capability to learn and take it upon themselves to add value to the company, and I think Stevens does a great job of preparing students to do that,” she said.

Now on the other side of the recruitment table, Hadidi shared her own experience of prepping for a job interview. She recalled being stumped on a very basic but important question. 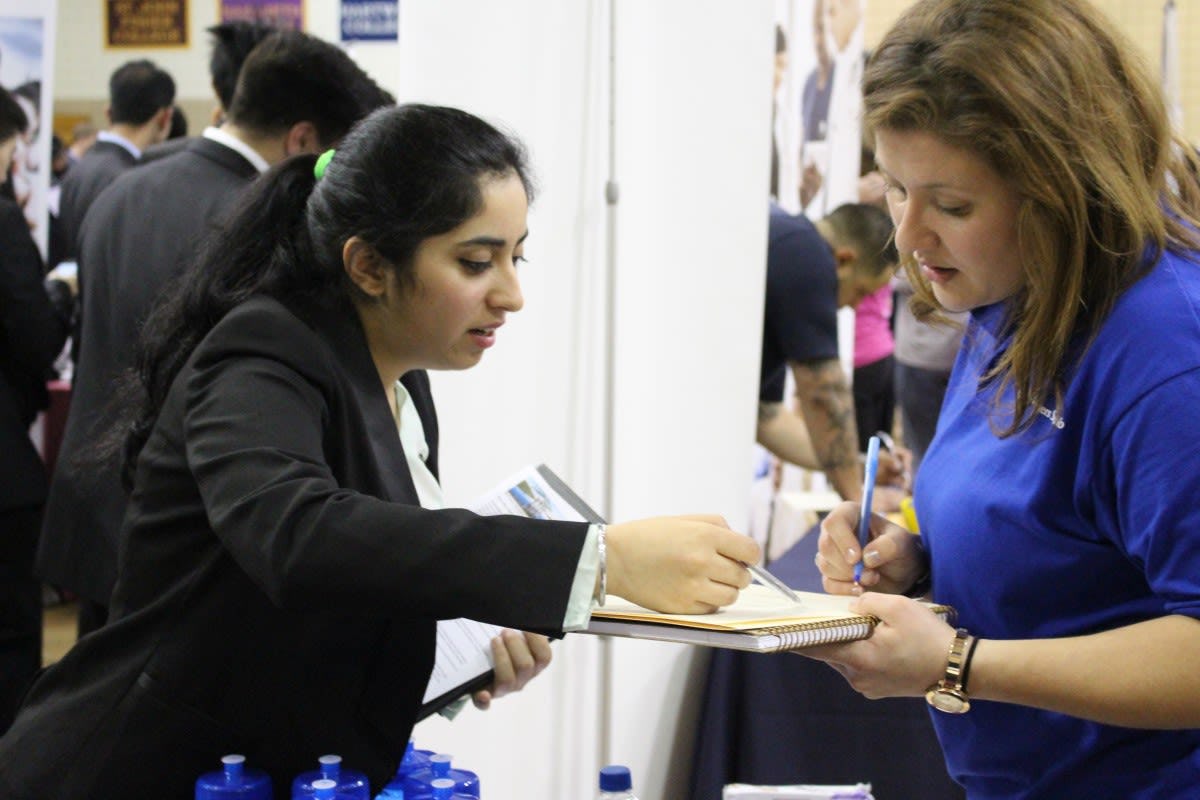 “The question of why do you want this job stumped me – you need to have a good answer because you want to set yourself apart from everybody else,” she advised.

It’s advice that one Stevens student is already heeding.

Monica Traupmann, a third year chemical engineering student, came prepared for the career fair. Having a plan in place and knowing which companies to target and what to say is critical at an event of this scale, she says.

“There’s a ton of people and you need to know where you’re going,” said Traupmann, who was seeking an internship that would provide the kind of work experience she wanted before graduation.

“My resume is not only tailored to the companies I’m targeting but I also know what I’m going to tell the recruiters of those companies and why I want to work for them.”

The next Stevens Career Fair will be held on September 26, 2018.  Companies looking to recruit Stevens students should contact the Stevens Career Center at 201.216.5166.

To learn more about student outcomes, visit Success After Stevens.