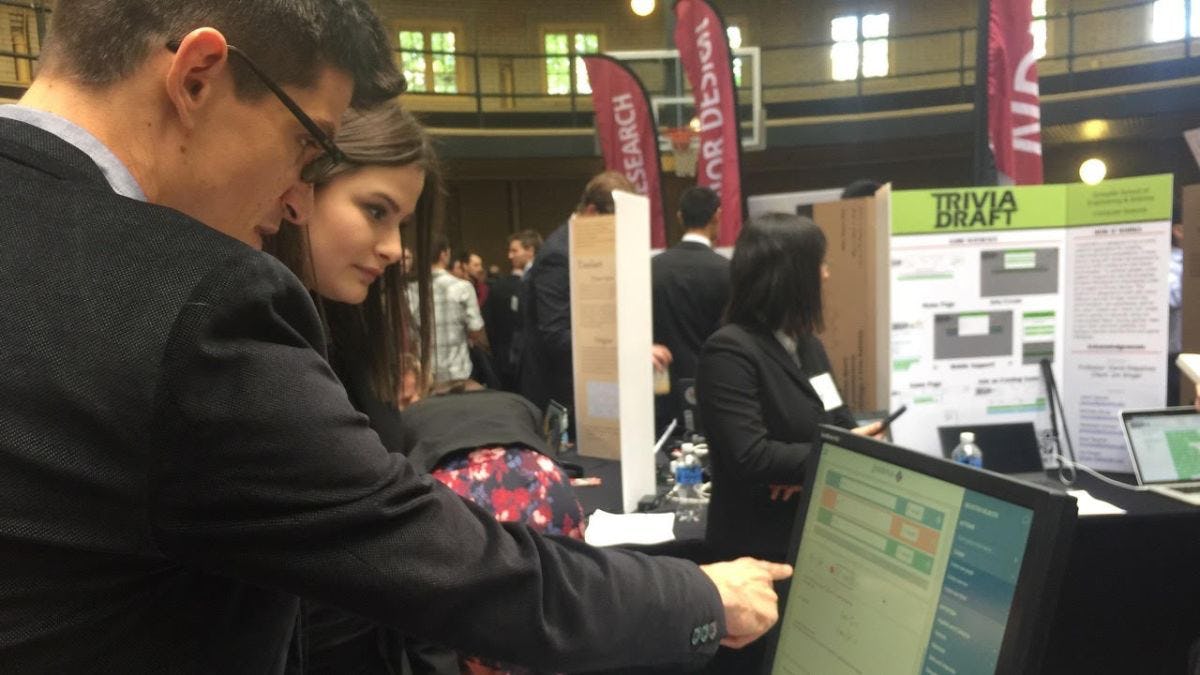 ​The Gradarius learning platform is the core of the Stevens Calculus System, a flipped-classroom approach to teaching calculus.

Gradarius is the world’s first learning platform to give college students step-by-step feedback on calculus problems. Developed at Stevens Institute of Technology by Dr. Alexei Miasnikov, Dr. Alex Myasnikov and other colleagues in the Department of Mathematical Sciences, Gradarius changed the department’s entire perspective on the subject.

“Gradarius is a unique software,” says math professor Jan Cannizzo. “It was designed to allow students to enter all of their work in a step by step manner, like they would if they were solving problems on paper.”

Cannizzo is the recipient of the 2017 Harvey N. Davis Distinguished Teaching Assistant Professor award. He’s also worked on the Gradarius project since its 2014 pilot launch. “In tackling calculus,” he says, “we tackled a difficult subject.”

Most math software on the market is built for foundational math courses, such as high school algebra, geometry or trigonometry. Gradarius needed to handle more complex functions like limits, derivatives and integrals. It needed to understand the logic and nuance of calculus problems to fit any student’s approach to working out any problem. It also needed to give students real-time feedback on their work at every step, a concept so fundamental to the project that the software was actually named for it: “Gradarius” is Latin for “proceeding step by step.”

The Gradarius platform does all of those things and more.

It works like this: students receive a calculus problem in the Gradarius system. They solve it, showing their work by typing mathematical notation from their keyboard. Every time they enter a portion of their work, Gradarius offers suggestions, corrections—even encouragement. “The software will tell you if you’re on the right track,” Cannizzo says. Instead of marking a solution incorrect, Gradarius recognizes exactly what part of the solution was wrong and provides guidance on how to properly solve the problem. If a student improperly took a derivative, Gradarius reminds them of the proper way. It can even offer a worked example if a student gets stuck.

Because Gradarius is so comprehensive, it completely replaced written calculus homework within the math department. Textbooks, too. “Last semester, we got rid of the book in our calculus classes,” Cannizzo says. “Students get lecture notes from us online. We can even chat with students directly within the software.” This responsive approach helps students progress, rather than getting stuck on a solution—or spending too much time on a wrong one. In short, it helps them learn.

From an instructor’s perspective, Gradarius is incredibly helpful. It automatically grades solutions and even offers partial credit.

More importantly, Gradarius offers invaluable data about how students solve problems. Instructors can also “jump right into a student’s work,” Cannizzo says. “You can always see their work in real-time and see exactly where they made a mistake.”

This level of in-depth feedback is so helpful that the math department recently updated the software to handle more advanced material for Calculus II and III classes.

All of those capabilities are attracting interest in the Gradarius platform from other universities. “There’s a lot of interest among universities,” Cannizzo says, “especially big schools that struggle to grade large numbers of assignments.” They’re also interested in the real-time tutoring aspect of the software.

But the biggest goal for Gradarius, Cannizzo says, is to “have it take off as in-demand software across the country, at any university that teaches calculus. We can see it replacing a lot of the existing homework software out there.” While the department is discussing potentially bundling Gradarius with textbooks from leading publishers, they’re also working with alternate, forward-thinking distribution channels like the Worldwide Center of Mathematics.

“Publishers are realizing that textbooks are not the future,” Cannizzo says. “They’re extremely expensive, students tend not to read them, and there are many other ways to get content these days.”

Gradarius has also captured the interest of high schools. Brooklyn Technical High School and Secaucus High School have completed pilot programs. While high schools have different needs than colleges do for calculus software, the Gradarius team is working out a plan to adapt the platform for high schools, too.

As encouraging as that is, and while homework scores seem to have improved with Gradarius, Cannizzo explained that the math department has ongoing efficacy studies to determine the link between Gradarius and the improved understanding among students.

Still, Gradarius is helping students succeed at calculus. That is no small feat.

Gradarius is part of the Stevens Calculus System, a flipped-classroom approach to teaching calculus. The full calculus learning system was rolled out in freshman level calculus classes in fall 2016.