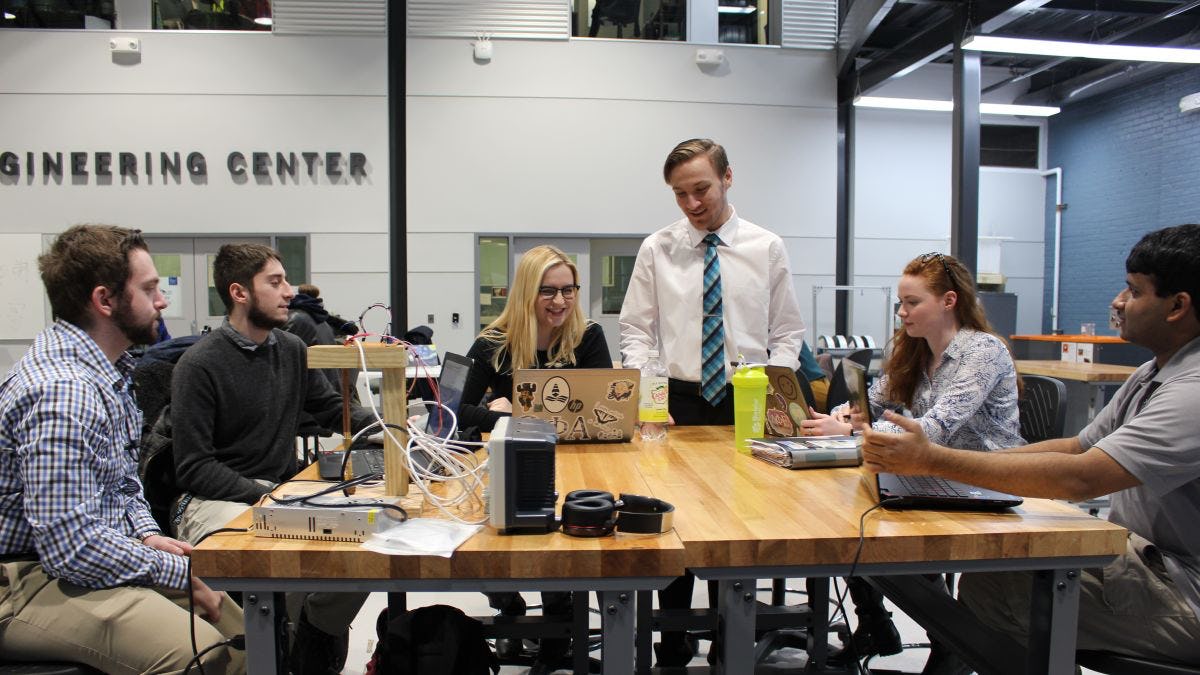 June 7, 2019 Update: Stevens Institute of Technology placed second behind West Virginia University in the 2019 Special Edition: Moon to Mars Ice & Prospecting Challenge. MIT received honorable mention. The Stevens team was also awarded for having the “clearest water” and the most accurate “digital core.”

When NASA RASC-AL (Revolutionary Aerospace Systems Concepts Academic Linkage), a collegiate aerospace design competition, announced its 2019 Special Edition: Moon to Mars Ice & Prospecting Challenge, university teams from around the country, including one from Stevens Institute of Technology, submitted their proposals for how they would extract ice water from the moon and Mars.

And among the proposals submitted by undergraduate and graduate teams across the nation, NASA and the National Institute of Aerospace (NIA) selected Stevens as one of the ten finalists to advance in the challenge last November.

“You have to essentially design and build a robot that is capable of drilling through a bunch of 'overburden,' such as stone, soil or clay, in order to get to the ice underneath. And once it reaches the ice, it would need to melt it, extract water from it, filter that water, and collect it into a bucket,” explained Stevens mechanical engineering senior Arjun Krishna.

We believe that supporting the NASA RASC-AL Moon to Mars Ice & Prospecting Challenge helps fuel the future of innovation. Seeing this come to fruition through the minds of young and talented individuals who are creating technological solutions to help answer complex problems both on our planet and beyond is extremely valuable. We look forward to supporting the Stevens team as they work on DEIMOS.
Brandon Marcus, business development manager for aerospace and defense at Protolabs, a sponsor of the Stevens team

Since its selection, the team has been engaged in extensive design and building of its prototype – DEIMOS (Drill-based Extraction of Ice-water and Martian Overburden System) – a semi-autonomous drilling and water extraction robot that is capable of extracting water from ice deposits buried beneath simulated lunar or Martian soil.

DEIMOS is also the team’s senior design project. Stevens mechanical engineering professor Eric Williams, the team’s faculty advisor, first raised the idea of competing in the NASA challenge back in September 2018. He describes DEIMOS as a new concept that the team is rigorously testing.

“The system will drill and extract information about the layers of soil and rock. When water ice is detected, the drilling will stop and a specially-designed water extractor will melt ice using direct heating and water drilling,” Williams explained.

A lot of progress has been made since the fall. The team received the greenlight from NASA to go forward with DEIMOS during its mid-review in March.

What’s more, in addition to the $10,000 stipend each finalist receives from NASA, the team secured nearly $6,000 in sponsorship from Protolabs, the leading digital manufacturing source for rapid prototypes and on-demand production.

“We believe that supporting the NASA RASC-AL Moon to Mars Ice & Prospecting Challenge helps fuel the future of innovation. Seeing this come to fruition through the minds of young and talented individuals who are creating technological solutions to help answer complex problems both on our planet and beyond is extremely valuable. We look forward to supporting the Stevens team as they work on DEIMOS.”

The most notable change since DEIMOS’ initial design was made to the extraction system, particularly in the material used in the extractor tip.

“The extractor tip has gone through a number of different iterations, but we think we have come up with a final design made of copper, which has unique thermal characteristics,” Krishna said.

The competition will culminate in June when teams demonstrate their prototypes in a simulated off-world test bed in front of a NASA panel of judges in Langley, Virginia.

And with roughly two months left before the finale, the excitement, as well as pressure, is building for the team members.

They’re planning a full-scale testing in April and another in mid-May. They also plan to have completed in May their final video submission and technical paper.

“Having been interested in this stuff since high school, middle school even, this is going to be a great stepping stone for me moving forward after I complete my studies at Stevens,” said Krishna.

No matter the final outcome in Langley, Williams expressed pride in the team’s dedication and hard work.

“This is the first time Stevens has participated and my hope is that we place first. But regardless of outcome, this event showcases Stevens as among the best universities in the country and gives our students the chance to shine in the national spotlight,” he said.

Before the final competition, which will be held June 3-7, 2019, the Stevens team will demonstrate its prototype on campus at the annual Innovation Expo May 3.