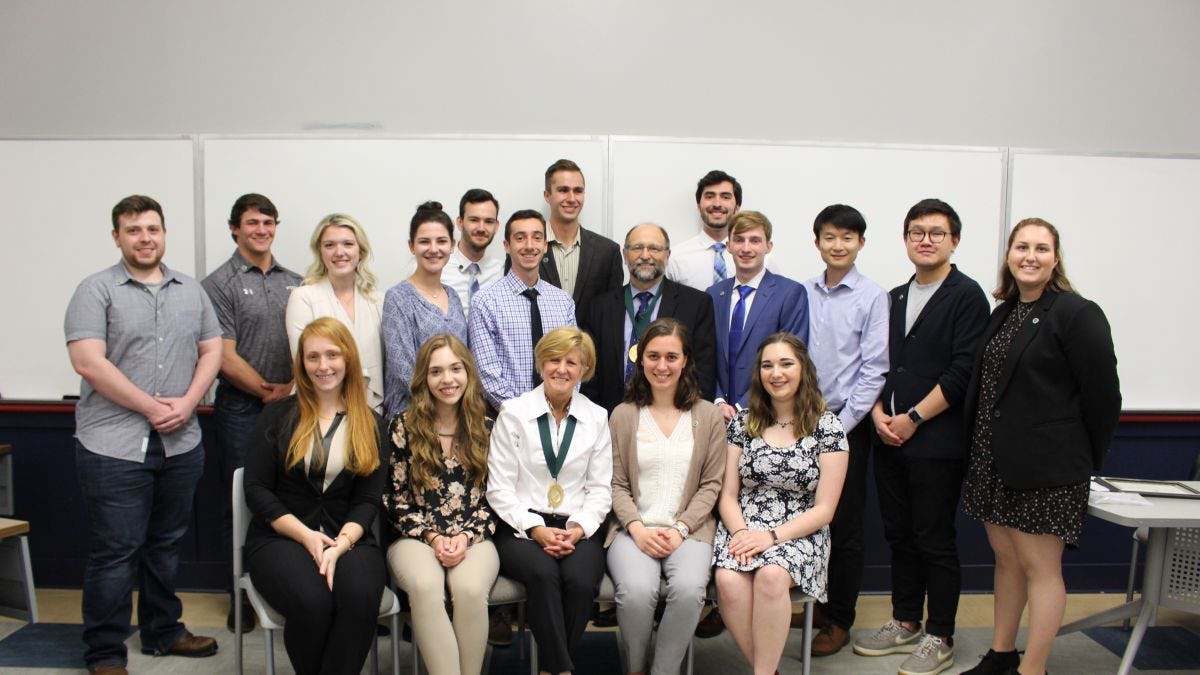 During Stevens Institute of Technology's annual Awards Gala in mid-April, there was a hearty round of applause as master of ceremonies Chris Cimino called out the name of Stevens biomedical engineering professor Vikki Hazelwood Ph.D. '07, recipient of the 2018 Distinguished Alumni Award for Science & Technology and a faculty member since 2004.

"She is one of the most beloved professors on campus," noted Cimino before yielding the podium to President Nariman Farvardin and Trustee Philip Crowley for presentation of the award.

But when Hazelwood took the stage, rather than focusing on her own career and accomplishments, she began speaking about the dozens of students she had mentored at Stevens — and the ways in which those students use intellect and inspiration to help improve life for surgical patients, patients with disabilities, pediatric patients, and countless others.

"I get some of the best and the brightest and the most savvy engineering students in the world," she told the crowd. "[Yet] they're only 21 years old!"

And when she paused to tick off numbers — how nearly 50 of her students had received patents for work that began as Stevens design projects; how a dozen more would file patent applications before the year was out; and how a few had even launched startups while still enrolled — the room erupted in applause again.

From sales whiz to acclaimed instructor

Hazelwood didn't set out to become an award-winning professor.

Growing up in New Jersey, she had her eye on a career as a physician and would eventually embark upon a successful 15-year career in process equipment sales and project management, a master's degree in biomedical engineering, and a second career in medical device and surgical sales — until a fateful invitation led her to higher education.

When professor Art Ritter joined Stevens in 2003 to create new undergraduate and graduate biomedical engineering degree programs, he asked Hazelwood to visit campus and give a guest lecture. Soon, he was inviting her to join full-time as a researcher and lecturer.

You need to be able to protect your intellectual property, make presentations and function in the real world if you're going to carry your project through. And that's what Dr. Hazelwood does exceptionally well: she puts you in the real world by applying your research in a business-like environment.
Jeckin Shah '05 M.Eng. '07

Competitive by nature — during her free time, she is a competitive waterskier — Hazelwood rose to the challenge and accepted.

"I always knew I wanted to teach," she says now.

Together the duo began building a program that has since grown by leaps and bounds, becoming a formidable building block of one of the university's signature research pillars as well as one of its most popular majors. Today she remains one of the program's instantly recognizable faces. In May, when 21 students (including 16 undergraduates) were inducted into the campus chapter of the National Academy of Inventors (NAI) as new fellows, Hazelwood was there beaming proudly, acknowledging the accomplishment and congratulating proud parents.

"The students here just get it," she says. "They're bright, they have an energy and an open-mindedness. They are thirsty for ways to put everything they have learned into perspective. They want to be prepared for their careers. Well, I had that career, so I can prepare you pretty well."

In addition to receiving the alumni award, Hazelwood has been twice named the university's Henry Morton Distinguished Teaching Professor; recognized by the New Jersey Inventors Hall of Fame with an Advancement of Invention Award; and inducted as an NAI fellow — one of just 115 women in the nation to be conferred with that honor.

Along the way, she also helped redefine Stevens' senior-year experience, methodically taking her advisees through the entire innovation process in the span of just a few months.

"The process is, in the first semester, we do concept and concept development. That's it," she explains. "By Christmas, they think they know what their project is. I tell them that that's the toughest part. In the second semester, they build and test, build and test."

But as her seniors churn out prototypes, navigate job interviews and final exams and begin preparations for Commencement, Hazelwood also throws them into a crash course in real-world entrepreneurship during their final months on campus.

"I require them to write up summaries and pitches for their projects," she says. "I send them to present at conferences. I have them watch me make decisions on my feet. This is all part of the business environment, and they need to know it."

Hazelwood also feeds her seniors a regular diet of guest speakers (often Stevens alumni) from industry, and requires them to prepare invention disclosures for the university's patent committee — a preview of the formal patent process.

"The writing really helps the teams focus on what kind of information to present and how to present it; after doing that, the presentations get better," she explains. "And after they look at a project from an invention-disclosure viewpoint, their presentations get sharper commercially: now, you can see the societal benefit of the project."

That hands-on approach has worked. Hazelwood-mentored teams have prototyped and presented dozens of novel devices and technologies at Stevens' annual Innovation Exposition showcase each spring, including catheters, measurement devices and athletic headgear; hypothermia treatments; and flotation devices for military personnel.

"Her stamp of approval was very important to us," recalls Hannah Timm '18, who graduated in May and is part of a team filing a patent application for a new therapy device the team created during the members' senior year to assist children with cerebral palsy. "She is a legend in the Stevens BME department: a strong presence, very experienced in business processes, a woman in engineering, a role model."

"By the end, when they graduate, students always tell me they have grown — and that they are extremely well-prepared for what is next," notes Hazelwood.

Indeed they are. Alumni she previously advised currently serve in key roles at leading healthcare firms such as Johnson & Johnson, Cooper Surgical, Bristol-Myers Squibb, Becton Dickinson, Medtronic and Stryker. A senior trio she advised in 2017, CerebroSense, took home top prizes in national entrepreneurship competitions and medical conferences for its proposed touchless brain scanner. A number of the teams have spun off viable startup ventures. 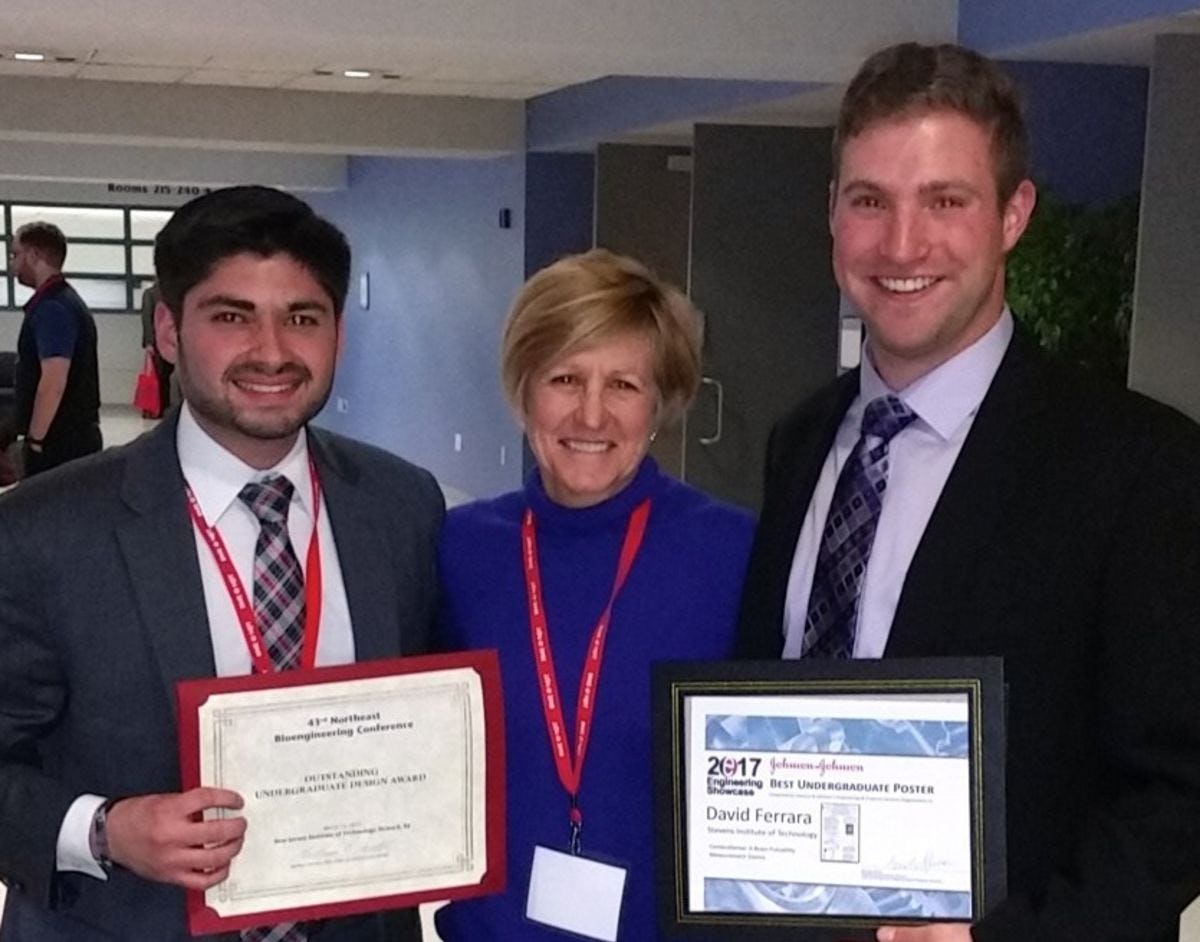 "Dr. Hazelwood was one of the biggest determining factors in my career," says Jeckin Shah '05 M.Eng. '07, a senior director of risk management and project development at medical device company electroCore. "She encouraged me to get out of my comfort zone, be an entrepreneur and start a company."

Hazelwood's mentorship was particularly valuable, Shah recalls, with regard to business skills such as communications, marketing and patent protection. That training enabled him to take his own senior project (a muscle pain-detection device) and create a viable startup immediately after graduation, paving the way for his present career.

"She was the first to introduce us to the business side of design and innovation," explains Shah. "You need to be able to protect your intellectual property, make presentations and function in the real world if you're going to carry your project through. And that's what Dr. Hazelwood does exceptionally well: she puts you in the real world by applying your research in a business-like environment."

"She loves what she does, and she wants her students to do well after they graduate," adds Shah. "You couldn't ask more from a professor."

"I do love these kids," says Hazelwood. "They're fun, they're extremely bright, and they have demonstrated that they can do and accomplish so much more than they ever thought they could. And I always have the confidence that they will accomplish more.

"Why should I settle for anything less?" 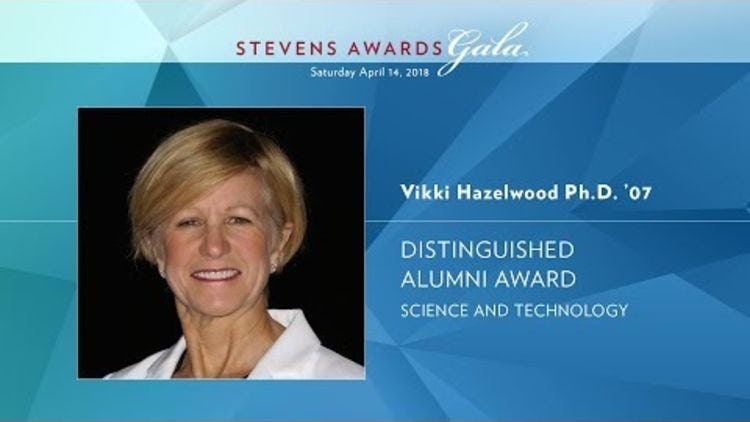