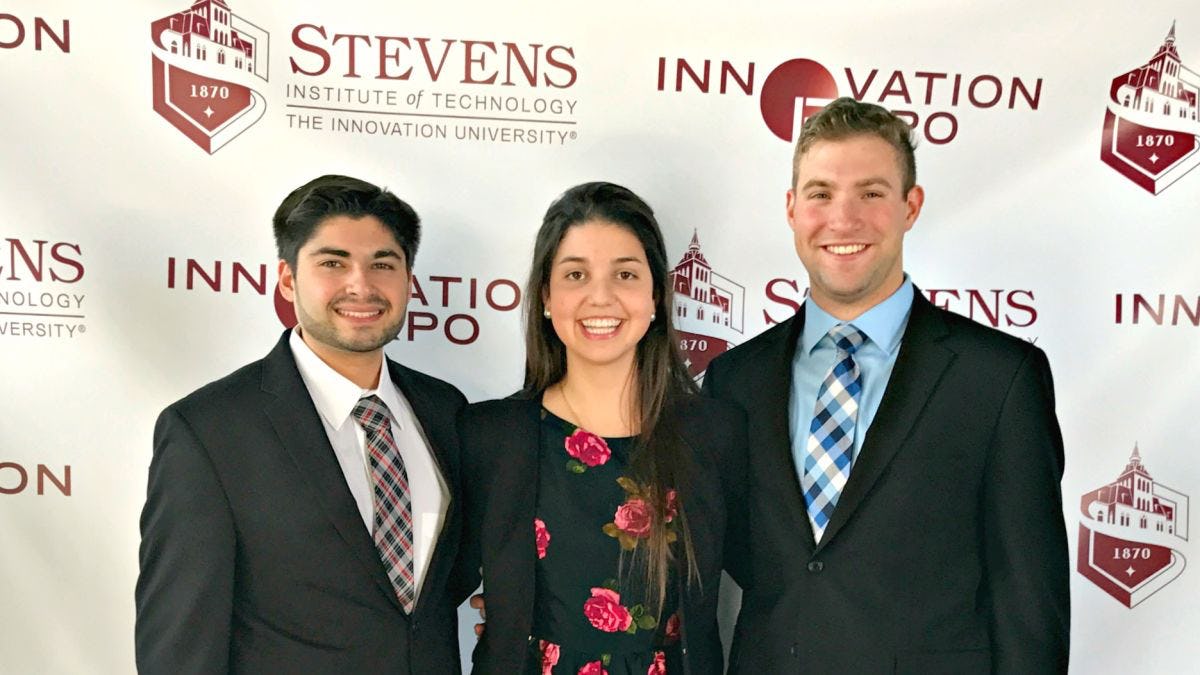 Ultrasonic sensors power CerebroSense's measurements — without ever touching the brain

During more than 160,000 open-brain surgeries in the U.S. each year, surgeons and anesthesiologists must monitor the brain's pulsatility, or changes in radius, for swelling, trauma, decreased blood flow and other sudden changes that might necessitate immediately medication, hyperventilation or other measures.

Doctors monitor these changes using a surprisingly low-tech method: by placing a finger directly on the brain and using their experience to guess how much, if any, the brain is changing in size moment to moment.

Now, in collaboration with Dr. Glen Atlas '82, an anesthesiologist and adjunct clinical professor at Stevens, three Stevens Institute of Technology seniors have set out to find a better way to measure and report brain changes in real time — without actually touching it.

The trio, David Ferrara, Andrew Falcone and Maria De Abreu Pineda, were recently awarded first prize in an undergraduate-poster competition at Johnson & Johnson's 2017 Engineering Showcase for the senior design project, which will be on display at Stevens' annual Innovation Expo showcase May 3.

"This project has the potential to significantly improve outcomes in craniotomy surgeries," explains biomedical engineering professor and program director Vikki Hazelwood, who advises the team. "These students have embraced the opportunity that this project offers to extend far beyond the classroom. It's a great example of our academic ideal, where students impact society while they are learning."

Brain surgeons' traditional technique of measuring the brain's pulsation during surgery by touching the brain directly with a finger or probe and guessing at the size of the pulses carries a small risk of stroke, ischemia or other complications after surgery.

It can be quickly brought in to an operating room and safely pointed at exposed brain tissue from a distance of two to 20 inches, sending sound waves toward the surface of the brain. Powered by a small Raspberry Pi computer, the device reads the echoes of those waves, giving instant readouts.

"One of our big selling points is that this device can be rolled into an operating room, take a reading in 30 to 60 seconds, and be rolled out again," notes Ferrara.

The team initially tested the device on an air-filled balloon within a plastic housing, slowly filling the balloon with additional air to simulate changes in the brain. The CerebroSense device accurately detected and measured volumes that dilated the shape of the balloon as little as 1 millimeter, proving the concept in principle.

More recently, using a more sophisticated, higher-resolution sensor, detection accuracy of the system increased to less than 0.3 millimeters — a range that approaches the target resolution needed to actually deploy the device in an operating-room situation.

"This is novel," says Falcone. "This is not something that's ever been done quantitatively before, so far as we can tell; we did extensive research, and nothing else measures the pulsations of the brain in a non-contact manner. The other methods require direct contact."

With the sensing technology now verified, the team says the next logical steps include the development of a complete prototype; addition of a camera; continued improvements in accuracy; eventual wireless capability to transmit the data; and future extension of the technology to take in additional cranial measurements with, for example, laser sensors.

While the three team members are soon headed in separate directions — one to medical school, two to careers in industry — they are determined to help see the technology they've helped develop brought to market.

"Being that it is the first quantitative measurement of pulsatility, and non-invasive, and being done in real time, we are very excited about what this device can eventually become," says De Abreu Pineda.

Indeed, a fresh group of Stevens students will continue the research when the trio graduates, mentored by Hazelwood and Atlas.

And visitors from industry will likely be asking the team plenty of detailed questions during the Innovation Expo event, probing for data and commercial potential.

"Expo day could be a very interesting one for us if we have something that turns out to be appealing to people who know this industry well," remarks Ferrara. "You never know what might happen next."