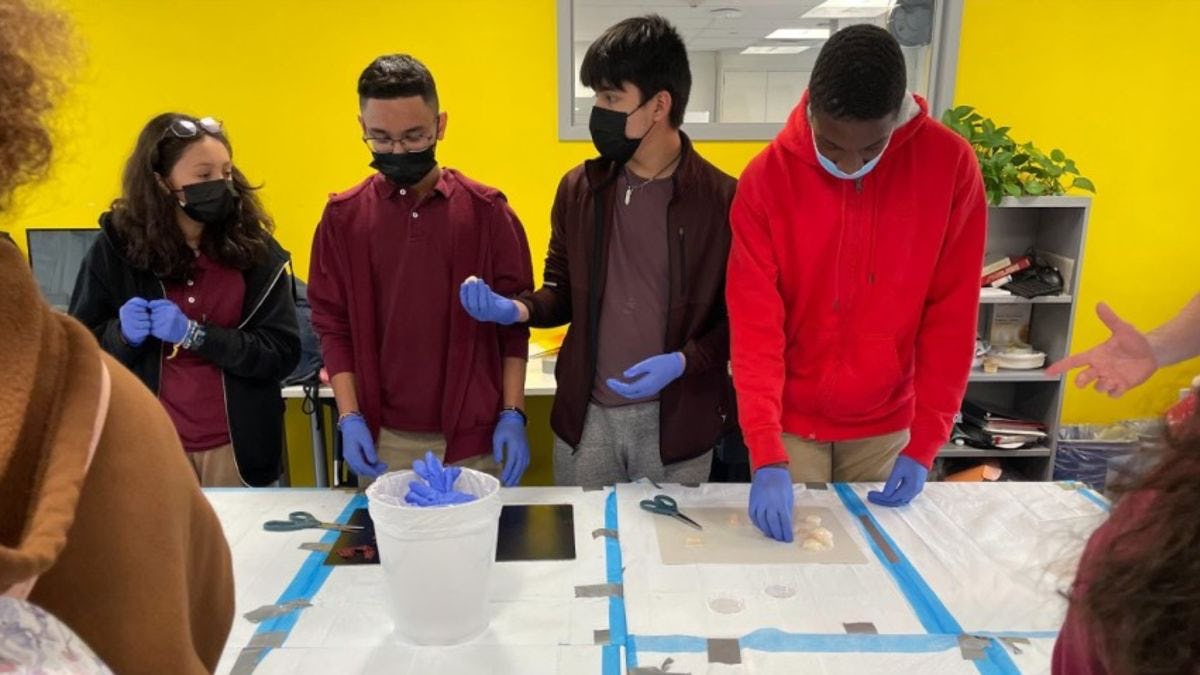 To what extent are the muscle movements of a college athlete and a grandparent the same? How are they different? What does the brain do when someone is going out for a brisk walk or running a marathon? We can see muscle activity digitally captured through computer interfaces, but can we hear it too? 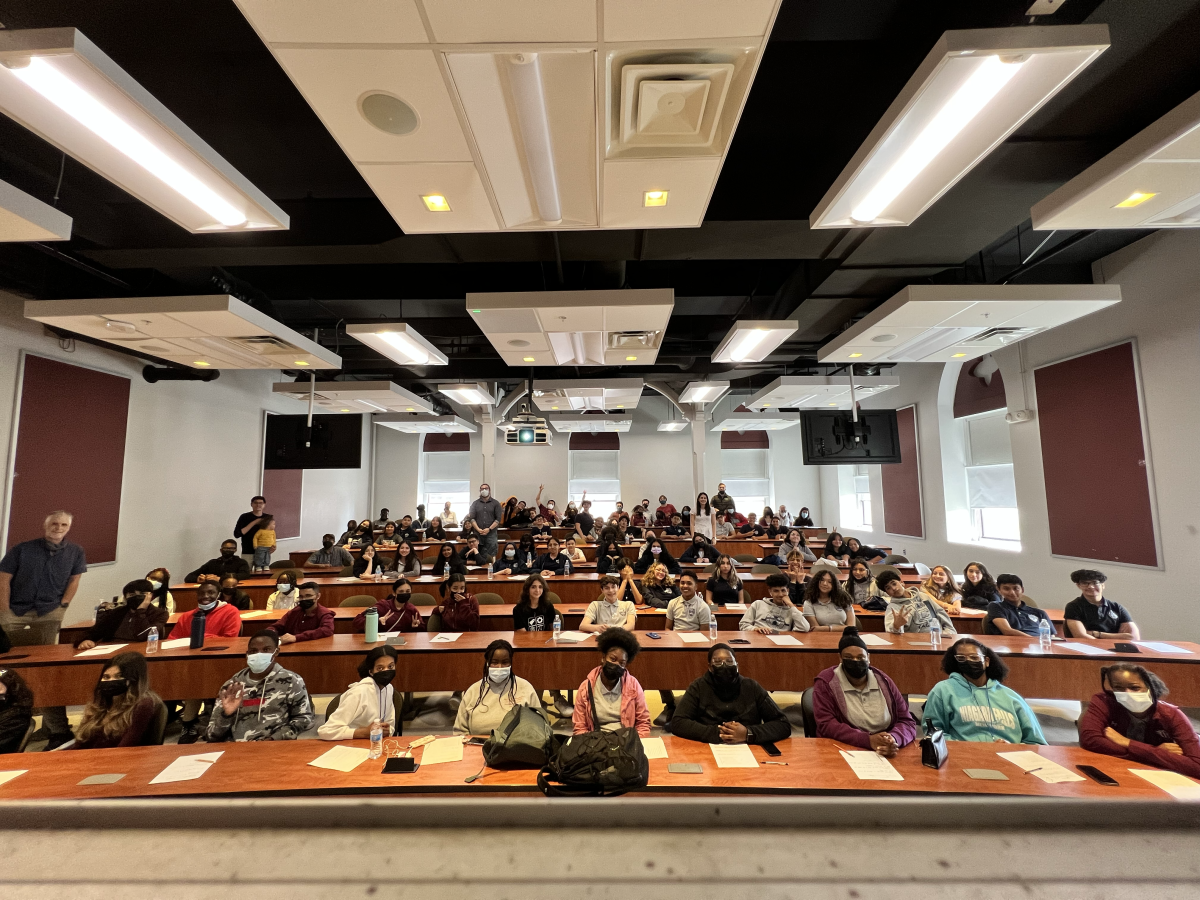 Eighty-two local students, grades seven through nine, from Jose Marti STEM Academy and Hillside Innovation Academy, spent half a day at the campus of Stevens Institute of Technology to explore the fundamentals of the mechanics of the body, particularly as they relate to human movement and the biomechanics of the brain.

The event, part of National Biomechanics Day, a celebration of the biomechanics field, was organized by the Center for Neuromechanics, an interdisciplinary, collaborative group of researchers and educators that investigate the function, structure and health of the human brain and utilize various engineering applications such as imaging, instrumentation, computation and rehabilitation to improve the quality of life for people with neurological disorders. 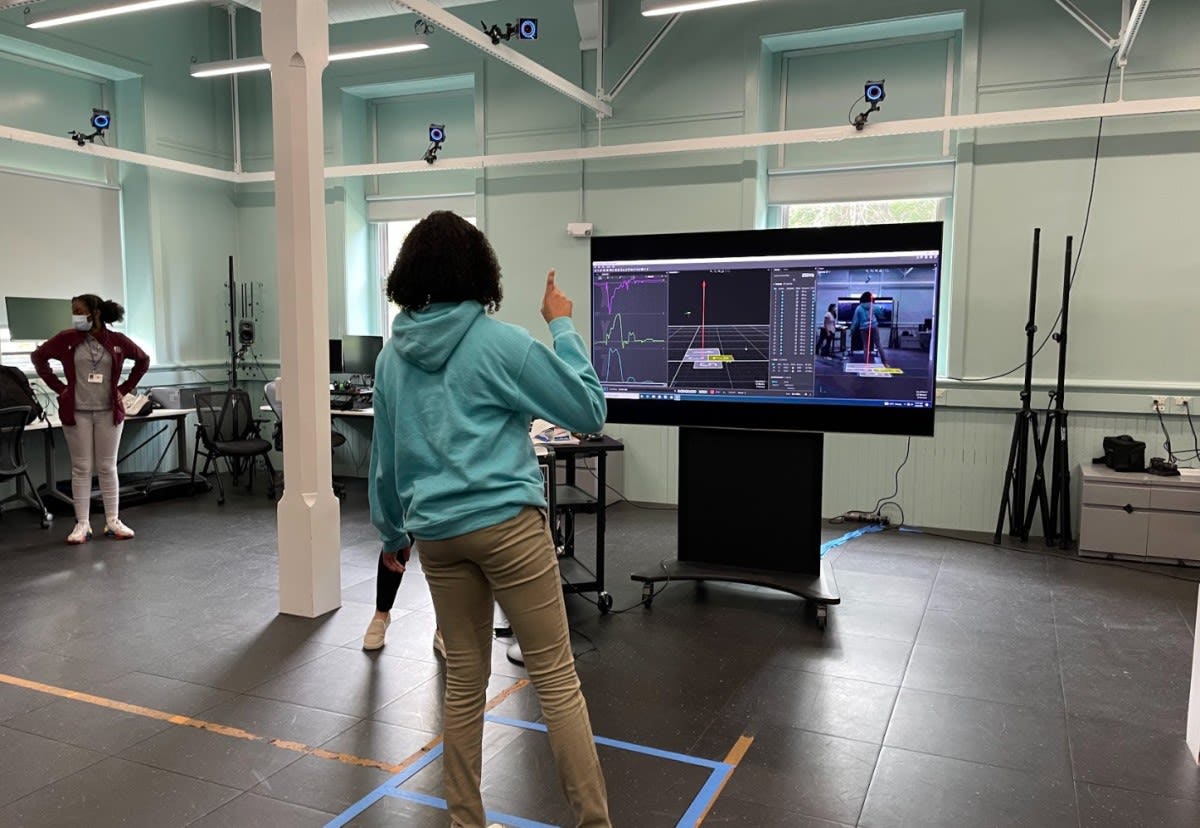 The event began with a welcome message from Antonia Zaferiou, who has hosted multiple National Biomechanics Day events each year since 2016. She introduced the vast field of biomechanics and its applications as well as the agenda for the day to a room full of eager students. Zaferiou welcomed students to engage in this field, and assured them that they were ahead of the curve by becoming aware of the field from an early age.

After the welcome, participants attended four experiential learning sessions in four research labs related to biomechanics, with a lunch break after the third rotation. Throughout the program, participants learned first-hand about brain-related applications of engineering.

In one of the rotations at the Musculoskeletal Control and Dynamics Lab, students experienced making music with their body movements and seeing the forces driving their movements. This rotation was led by Zaferiou.

“During our rotation, students really came out of their shells. At first they were a bit timid to step onto the force sensors, but by the end of the session, many of them were exploring their favorite body movements, including some dance moves we’ve never seen. At the end of the session, students became string instruments, triggering specific musical sounds with their body movements.”

Stevens mechanical and biomedical engineering professors Raviraj Nataraj, George McConnell, and Johannes Weickenmeier, and their students, ran these labs. The aim of these rotations was to teach students about virtual reality for rehabilitation, biological tissue material properties, brain mechanics, and electrical stimulation like that used to help people with Parkinson's disease.

“Biomechanics is a broad field and relies on contributions from mechanical, biomedical, and electrical engineering, as well as biology and computer science. Most medical problems are so complex that novel interventions come from multidisciplinary teams. Getting students excited about the various ways in which they can contribute to important societal problems early on is the key to increasing diversity and innovation,” said Weickenmeier.

Students got a chance to see the labs’ tools and systems in action, including a neural recording data acquisition system needed to see and hear the tiny electrical signals, i.e. action potentials, the nervous system uses to control movement.

Fueling inquiry and discovery through technology

“A key aim of this event was to instill in young local students a desire to know about and discover biomechanics and open their eyes to the possibility of a career in the field,” said Weickenmeier.

Based on a post-survey, where students shared their feedback, the event fulfilled this goal. Responses ranged from activities students found to be the most fun – from dissection exercises to viewing cells under a microscope to seeing parts of the brain.

But the ultimate fan favorites were the VR activities and motion sensor games used to demonstrate human movement.

The MOCORE Laboratory uses marker-based and markerless motion capture to project avatars into VR environments that persons can control for movement training.

“Utilizing VR technology is a safe, effective, and fun way to help people relearn movement skills when recovering from an injury to the brain or spinal cord,” said Nataraj, director of the MOCORE Lab.

"I liked the section with the motion capture systems," said Richard, a ninth grader, explaining that he learned "how even the simplest of motions can play a massive role in our lives." He adds, “To see it in person was nothing short of mind-blowing."

For eighth-grader, Kaitlyn, the fact that the sensors could track almost every move using cameras and reflective pieces was surprising.

Students were also enlightened on the role technology could play in improving people's lives, including individuals with disabilities and brain injuries, and those impacted by diseases such as Parkinson's. “This was the first time many of the students ever heard about neural prosthetics like Deep Brain Stimulation or Brain-Machine Interfaces, but many of them know someone living with a neurological disease. Introducing these technologies to students was very rewarding for all involved from my lab,” said McConnell, director of the Laboratory for NeuroInnovation. 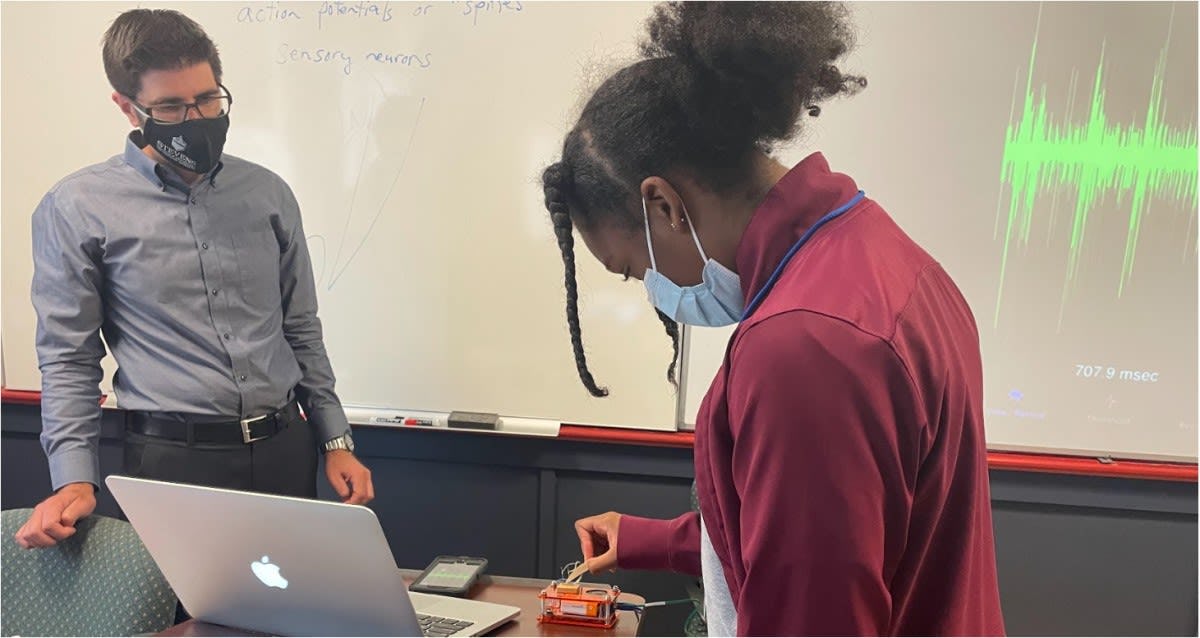 "I think it provides an innovative and engaging way for people to gain back their physical motion," said Jesly, a ninth-grader.

For Esmeralda, a ninth-grader, biomechanics is important to study “because it increases our ability to advance our society, while also helping out people who would otherwise struggle for the rest of their lives."

One of the Center for Neuromechanics' primary objectives is to engage with a diverse group of young students to work in the field of brain mechanics. In keeping with this objective, the event concluded with a closing message that highlighted the many ways in which engineers study the human body and the impact this work has on society.

“The brain is complex and it will take creative and curious minds to unlock all its secrets,” said Weickenmeier.

Learn more about academic programs and research in the Department of Mechanical Engineering: