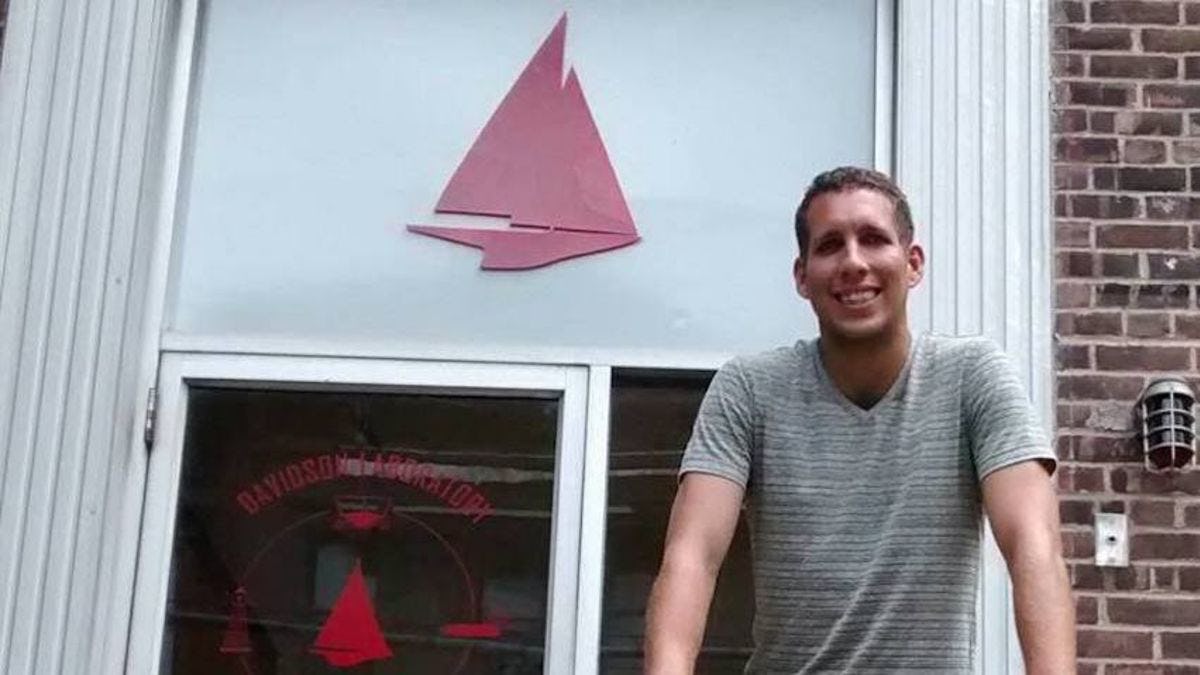 He used to struggle with math. Now he’s a rising expert in coastal flood and global warming forecasting.

“Math in the classroom was too easy. I got distracted,” he admits. “On my own, when I could learn at my own pace without any restrictions, I discovered the power of math.”

A postdoctoral researcher at Stevens Institute of Technology, Schulte works under research assistant professor Nickitas Georgas in the Davidson Laboratory. The Davidson Lab has long been a leader in forecasting, helping shed light on weather patterns from local flooding in Hoboken to major storms like Hurricane Sandy and Hurricane Harvey. Schulte adds to that knowledge by using statistics to create coastal flood forecasts.

“I never thought I would do any research in math or statistics,” he says. But now? “I’m a big statistics guy.”

Schulte’s journey to becoming a big statistics guy was “unorthodox… until senior year in high school, I didn’t really pay attention. But I did a college visit in my senior year and thought meteorology would be a pretty cool thing to do… but I needed math.”

So Schulte taught himself pre-calculus.

By the end of his senior year of high school, he was teaching himself graduate level mathematics.

“I realized that if I have a good understanding of math, I can do statistics or physics or meteorology—pretty much anything I wanted,” he says.

That understanding also helped him discover where he most wanted to apply math: algebraic topology and wavelet analysis. Algebraic topology, a branch of mathematics using theoretical algebra to define spatial objects, “used to be considered pure mathematical theory with no real-world applications,” according to Schulte. Now, he uses it to create more accurate forecasts.

One way meteorologists determine weather patterns is through the use of ensemble forecasting. The traditional approach to ensemble forecasting combines statistics dealing with flood timing and intensity without separating out the uncertain variables in each data set. “It’s not the model that’s wrong,” Schulte says, “it’s how the data is being processed.” Schulte overcomes this limitation by processing the data with statistical techniques that separately account for timing and intensity, allowing for greater accuracy.

Schulte is also receiving praise for his global warming forecasting models. Most people understand global warming to be a general, uniform increase of the Earth’s temperature, but global warming is more than just warming the planet; it’s altering the circulation of particular air currents in the atmosphere. The largest cause of those altered currents has yet to be pinpointed, but three decades of research points to two likely culprits: tropical thunderstorms or arctic warming.

“Ongoing research suggests that the really cool winters we had in 2013, 2014 and 2015 were likely the results of increased warming of the planet,” Schulte explains. As the planet warms, tropical thunderstorms “excite atmospheric waves that can move to mid-latitudes and amplify jet stream troughs and ridges,” Schulte explains. “The hypothesis about global warming is that tropical thunderstorms may become better at making jet stream troughs and ridges.”

Then again, polar vortex theory pins arctic air currents as the culprit of those colder winters. “Basically, the Arctic warms faster than moderate latitudes,” Schulte explains. That faster warming could lead to a weaker, wavier jet stream full of troughs and ridges.

“Is it both currents?” Schulte asks “Is it more arctic than tropic? More tropic than arctic? That’s what we’re trying to figure out.”

In order to help settle the debate of tropical versus arctic, Schulte and fellow researcher Sukyoung Lee looked at the East-Pacific, North-Pacific pattern. It’s been studied since the 1950s and is unrelated to arctic oscillation, which is often regarded as pattern most closely linked to temperature variability in the United States. After applying statistical analyses to 50 years of data, they found that the arctic oscillation wasn't as strong of a temperature driver as previously thought—meaning, tropical thunderstorms and the North Pacific atmospheric/oceanic system might be the culprit after all.

Schulte and Lee published their findings in top journal Nature. The reception has been fairly positive. “We think this might change people’s perspectives of weather forecasting,” Schulte says.

Schulte is job searching right now. But whether he ends up in academia or industry, he knows one thing for certain: it will involve meteorology. And lots of math.