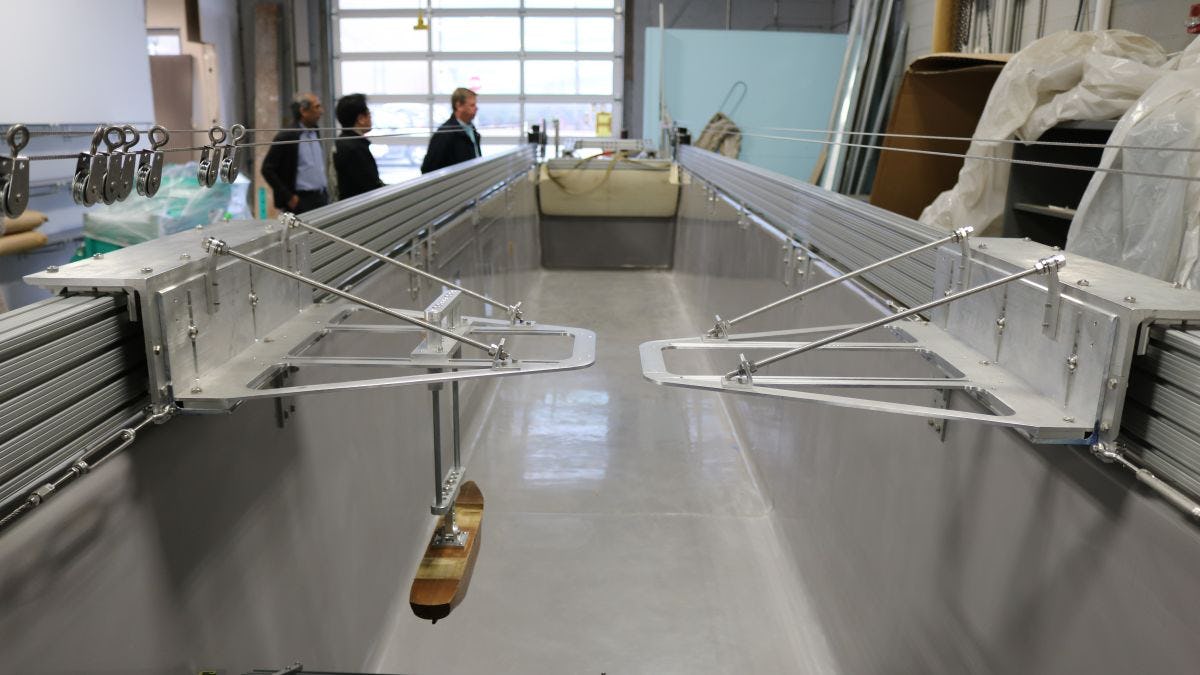 The United States Congress created the Department of the Navy in 1798 to defend the American colonies from the commanding British naval forces. Since then, one foe has proven to be the most relentless for the U.S. Navy: the sea itself.

Sea currents have unpredictable characteristics. At any moment, ships, boats, and other vessels may face weather-related threats such as hurricanes, squalls, and rogue waves that can damage the parts and structure of ships. Even in calm waters, the salinity of the sea contributes to the wear and tear of ships, including rust.

On and under the surface of the sea, many questions arise—engineering questions involving hydrodynamics—and researchers at Stevens Institute of Technology are helping to find answers.

A towing tank in Hoboken

Today’s U.S. Navy is the most powerful in the world. It has built a robust and technically advanced fleet like no other, commanding the seas thanks to its advanced technologies, innovative designs, and research capabilities.

The Naval Air Systems Command (NAVAIR) works to keep it this way. Their mission is to provide “full life-cycle support of naval aviation aircraft, weapons, and systems operated by Sailors and Marines.”

Recently, NAVAIR turned to Stevens to help with their mission.

Researchers from the Charles V. Schaefer, Jr. School of Engineering and Science at Stevens are working with NAVAIR on rebuilding a towing tank to be used for research on naval vessels. A towing tank, a water-filled basin equipped with advanced technologies and measurement tools, is used to help understand the forces of the sea. 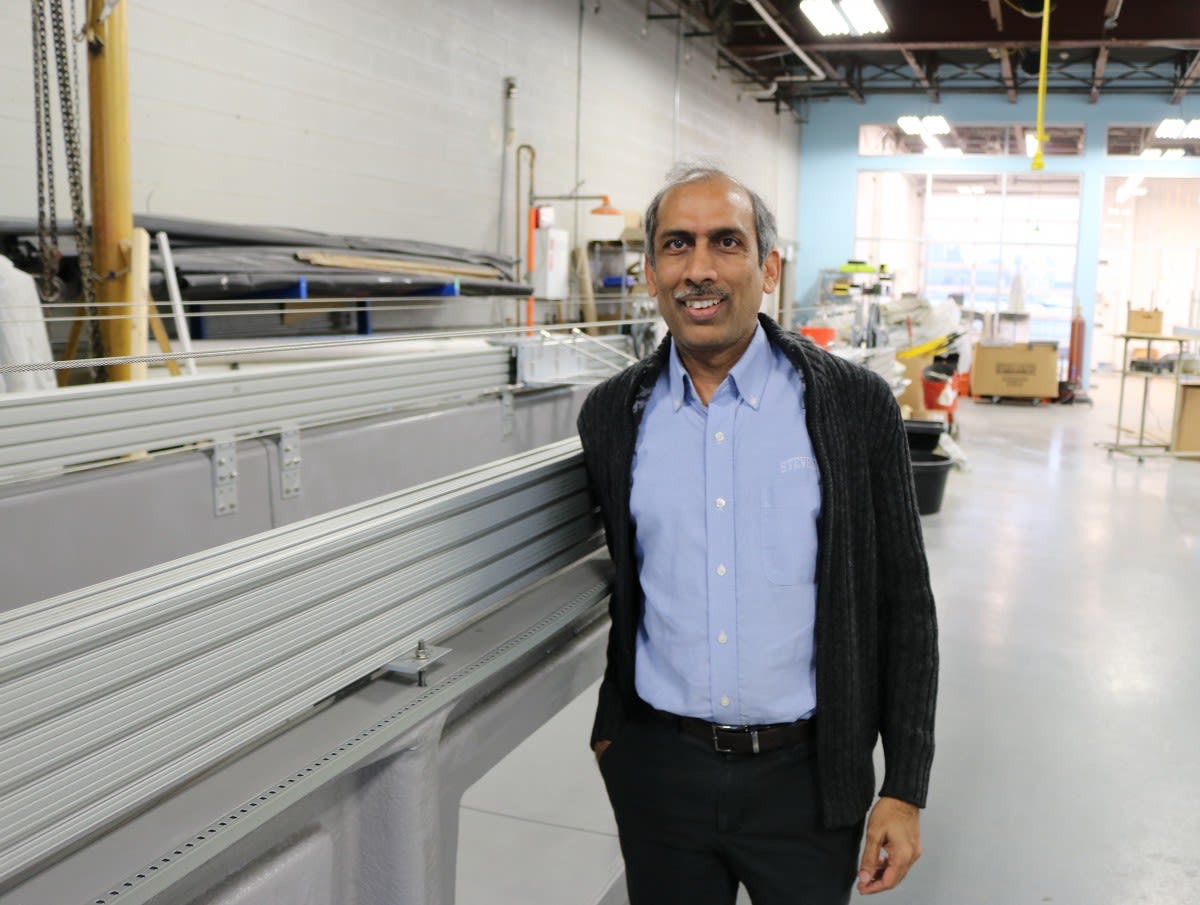 “This research is important for the U.S. Navy and the general public,” said Raju Datla, research associate professor in Stevens’ Department of Civil, Environmental, and Ocean Engineering and the Davidson Laboratory. “Stevens has a lot of experience with experimental marine hydrodynamics and ship model towing tanks, so NAVAIR was interested in our expertise,” he added.

Towing tanks enable researchers to carry out hydrodynamic tests with geometrically similar reduced scale models of ships and other vessels. They can simulate swells and waves, including rogue waves, as they would occur in the ocean, but on a smaller scale. Researchers can then observe the impact of hydrodynamics on vessel design, including the hull, structures, and propellers.

Researchers and engineers use experimental hydrodynamics testing and research to understand the effects of real waves on full-sized naval ships and vessels. Variables such as thrust, resistance, and wake are tested and measured in calm or rough sea simulations. The research also helps in improving the design of new and existing ships to optimize their performance in the real world.

For NAVAIR, Stevens is building a towing tank system right on campus in Hoboken, New Jersey, to be delivered and installed at NAVAIR facilities upon completion.

“Stevens is building us a system that we can use for our research,” said Adoum Mahamat, a physicist with NAVAIR. “The internal research that we are working on, and having this tow tank at Stevens, saves us time and money.”

The towing tank will help NAVAIR capture critical data in a controlled environment before going out into the field—very quickly, and cost-effectively, according to Mahamat. 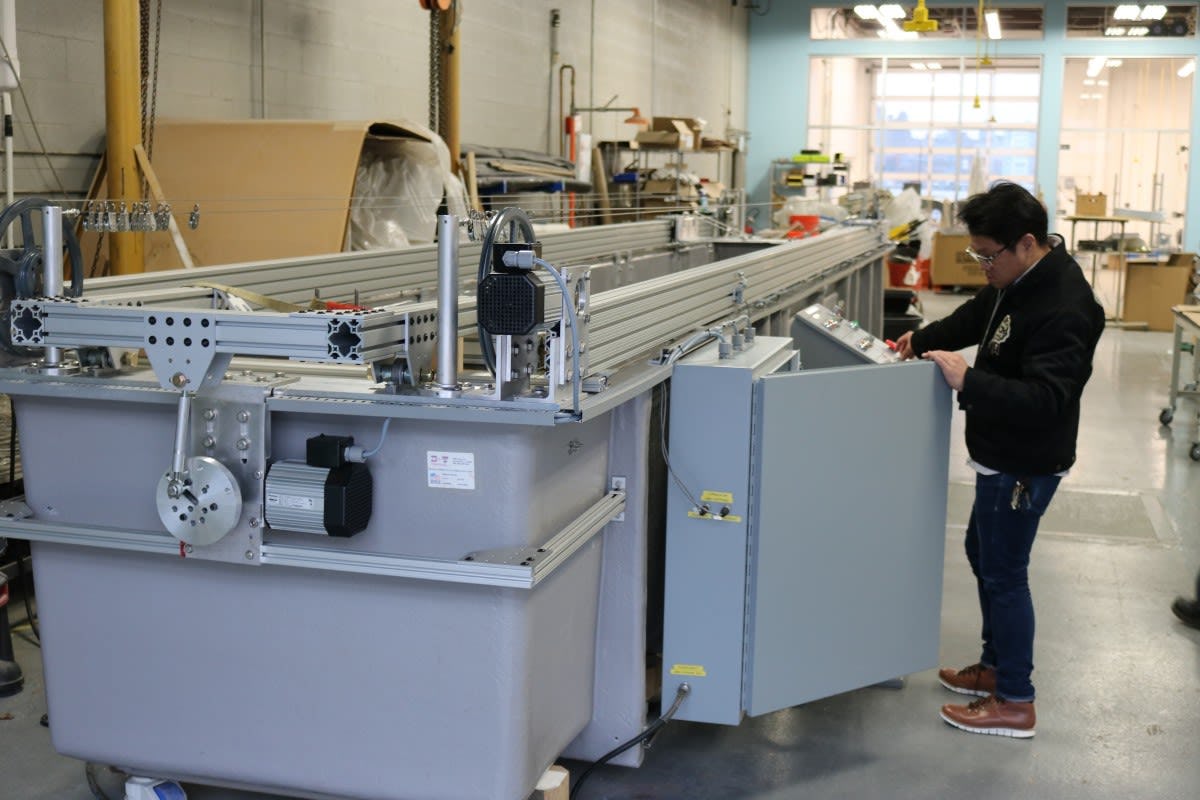 In the lab near the Hudson River: Stevens Institute of Technology researchers help design and build a towing tank for the Naval Air Systems Command (NAVAIR).

Stevens’ history with towing tanks goes as far back as May 1931. A professor of mechanical engineering, Kenneth S.M. Davidson, used the Stevens swimming pool to study scale models of ships. Four years later, in 1935, the Experimental Towing Tank Department was founded, which was renamed the Davidson Laboratory in 1959 in honor of Davidson. Ever since the lab’s founding, Stevens has remained a leader in experimental hydrodynamics testing and research.