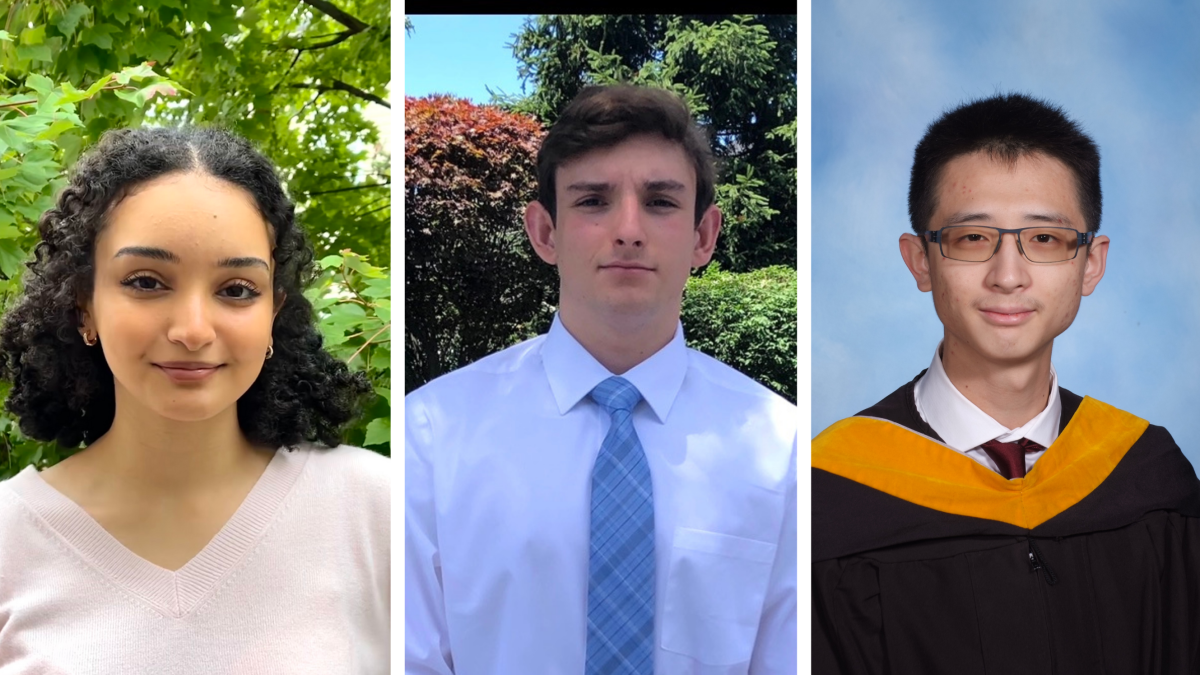 “Even for a planned induction of labor ­— from what I saw, most inductions don’t go as planned,” said Hui, who studied biology for his undergraduate degree.

Hui, Aziz and Greenberg are three of six students who participated in the Summer 2022 JCMC internship program.

Now in its second year, the program “provides pre-health students the opportunity to obtain a clinical experience and see firsthand what it is like working in a women’s health department,” said Patricia Anne Muisener, teaching professor and associate chair for undergraduate education for the Department of Chemistry and Chemical Biology.

Muisener is also chair of Stevens’ Health Professions Advisory Committee and developed the program with professor and department chair Woo Lee and JCMC Residency Program Director and Chair of the Department of Obstetrics, Gynecology and Women’s Health Lance Bruck.

Working similar hours to medical students and residents, two interns each month shadow doctors and other hospital staff while observing surgeries and deliveries, rotating through obstetrics and gynecology clinics, and assisting with routine medical duties, such as taking vitals, conducting rounds and attending patient plan and departmental meetings.

The internship exposes them to the inner workings of hospital operations and clinical medicine, while also helping them develop their medical school portfolios.

The focus on OB-GYN, said third-year undergraduate Aziz, offers learning opportunities that are both specific and wide-ranging.

“There are surgical cases, oncology cases, general labor and delivery. It was a really good field to explore, getting both the medicine and the surgical side of it, and observing how doctors work, how nurses work with them and all the different types of things that exist within the hospital,” she said. 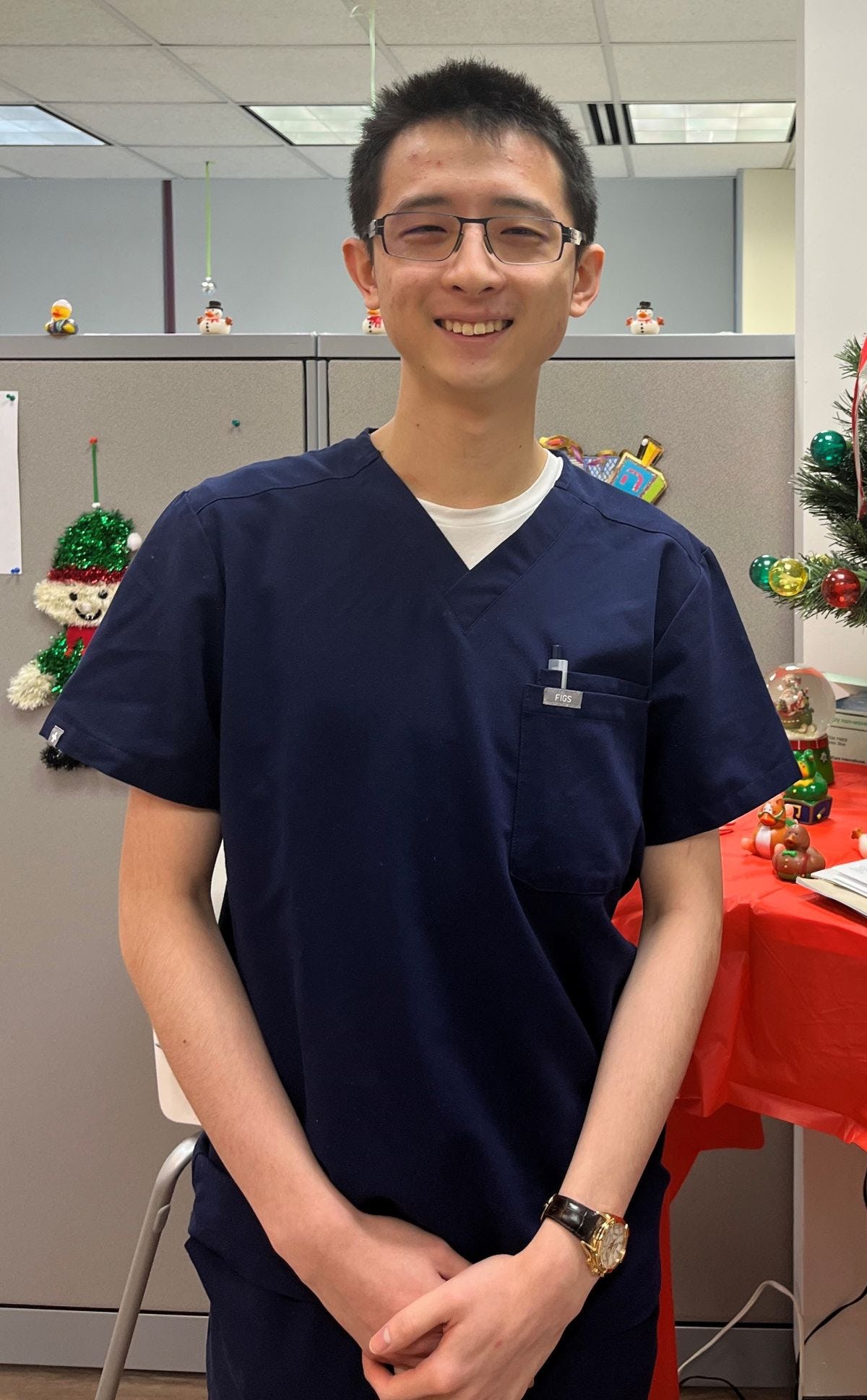 Thompson Hui ’22 M.S. ’23 wearing scrubs from the internshipMornings on the JCMC internship typically began at the hospital at 6:00 a.m.

The interns’ shifts started with an hour of bedside rounds, during which the students accompanied one or two residents to check on each overnight patient.

At 7:00 a.m. the interns, residents, medical students and one or two attending doctors assembled in the conference room for table rounds, where residents presented updates on each patient’s case and opened discussion for feedback and formulating a treatment plan.

“That was really interesting to see how they worked through things in their mind and the steps they would be taking,” Aziz said.

Following this meeting, the interns would report to either the nurses’ station on the labor and delivery floor or a scheduled clinic assignment for the rest of the day.

On clinic days, each student observed primarily in either the medical center’s gynecologic oncology or high-risk pregnancy clinic.

The students also sat in on training and clinical review conferences, including an M&M, or morbidity and mortality meeting, in which hospital staff analyze the deaths and disease cases that have occurred in the past month ­for “anything that fell short in terms of healthcare and how they can improve themselves,” Hui said.

“It gave insight on how they’re always trying to better themselves, and that medicine is a practice — it’s something you have to work on continuously,” he said.

All in the timing

The program is designed so each student focuses for two weeks on obstetrics and two weeks on gynecology, subject to case availability.

Duties and responsibilities depended on the need of the moment. One hour the interns might be quietly observing; the next, taking a patient’s temperature, fetching equipment or, as Hui experienced, holding a patient’s legs while they were in labor.

The students quickly learned that working in a hospital requires a strong dose of flexibility. The unpredictable nature of what cases might arise meant that some days would be very busy, while at other times the students would be in for long waits. Labor especially — whether scheduled or spontaneous — could take “hours and hours” longer than expected, Aziz noted.

Standard shifts ran until 4:30 p.m., Monday through Friday, but “there were plenty of times where we’d stay later because a surgery ended up taking a couple hours,” Greenberg said.

Greenberg is in his second year in the Accelerated Chemical Biology Bachelor’s Program, a joint program with Rutgers New Jersey Medical School that allows students to earn both their B.S. and M.D. degrees in seven years, one year less than if the two programs were completed separately.

He took the opportunity to pick up a couple of night shifts during the internship, working from 7:00 p.m. to 7:00 a.m. the next morning.

“Not only did it show me the resilience and the mental strength of the staff, but it also showed me how well things are set up to make sure that nothing goes wrong, even when there’s less people there,” he said.

Learning opportunities also came from being in the right place at the right time.

Hui, for instance, found himself front and center when an emergency arose during a routine checkup.

“I was shadowing one of the midwives, and we were going over how to take a patient history,” he explained. “We put [the patient] on continuous monitoring, and we could see and hear a sudden dip in the baby’s heart rate. I was right there, so I got to see that whole rapid assessment of whether or not there actually was an emergency. I saw them call the [emergency] code, and everyone being very organized and preparing to rush the patient into the OR.”

“Those types of things you can’t really prepare for,” he added, “but you always have to have it in the back of your mind: What if something goes wrong?”

A study in contrasts 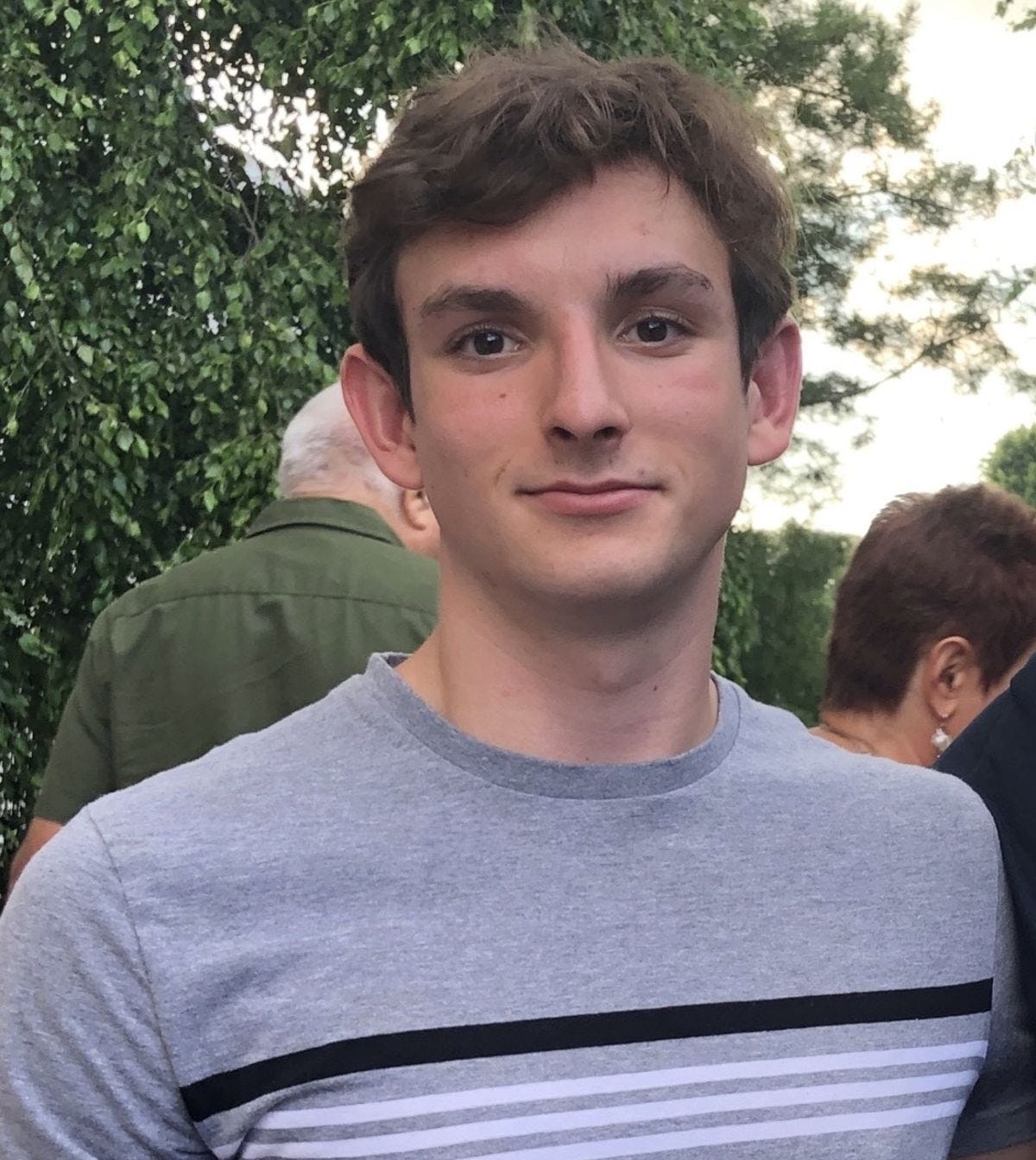 Michael Greenberg ’25While both obstetrics and gynecology offered a wide variety of learning experiences, the students noted sharp contrasts between the two.

With a high incidence of cervical cancer in the Jersey City patient population, much of the gynecology focus of the internship centered around oncology and surgery, they said, while the obstetrics rotation focused more on medicine.

“For OB, you have to consider the whole patient, more similar to internal medicine,” said Hui. “I had to shift gears to more anatomy and more surgical-oriented for GYN cases.”

“Also with OB, you have to consider that you have two patients: both the mom and the baby,” said Aziz. “There’s a lot more constant monitoring and busyness when it comes to OB over gynecology.”

With this shift in focus also came a shift in atmosphere and approach.

While many of the obstetrics cases were spontaneous and celebratory, with patients sometimes cracking jokes during delivery, gynecologic oncology cases were both more scheduled and more sober. The interns’ activities in those situations adjusted accordingly.

“Sometimes we didn’t interact with those patients at all,” said Hui. “We just stood in the background and observed silently during the operation.”

Aziz, Greenberg and Hui all agreed that the JCMC internship offered insight into understanding disease as more than a mere academic exercise.

“You might read [about rare cases or conditions] in a textbook, but you won’t realize the implications or how significant they are until you see the actual patient in front of you, how things get medically more complicated, and how the whole medical team has to figure out how to best accommodate for that,” said Hui.

For Aziz, who grew up in Jersey City, witnessing medicine in its human context also sparked a more personal connection to the work.

“Seeing patients from my own community and hearing these patients’ stories, learning about their backgrounds, it was very emotional to me and inspired me even more to want to go into medicine and give back to my own community, like many of the doctors have,” she said.

Greenberg, who has an interest in surgery, said the experience gave him a better sense of what it’s like inside an operating room — “what the expectations are, what the dynamics are between the staff, doctors and nurses, even the doctor-patient interactions before the patient is put under,” he said.

In addition to the high level of organization, routine and methodical procedures, the staff’s camaraderie and willingness to teach impressed the students. Greenberg and Hui noted that the experience gave them a better understanding of how medical knowledge is passed on through all levels of staff.

“You could see each older generation teaching and mentoring each younger generation,” Greenberg said. “There’s so much information you have to learn and prepare for, it was really nice to see that you’re not all alone. People there want to see you succeed.”

But perhaps most of all, the internship demonstrated to the students how personal the fields of obstetrics and gynecology are ­— and how privileged they were to be allowed to take part.

“I was honestly a little shocked at the first delivery that I observed because it dawned on me, Who am I? I’m just a college kid, and you’re letting me watch the birth of your son or daughter,” Greenberg said. “It was really humbling. It really shows you what you’re working towards in medicine, helping people and giving back to the community.” 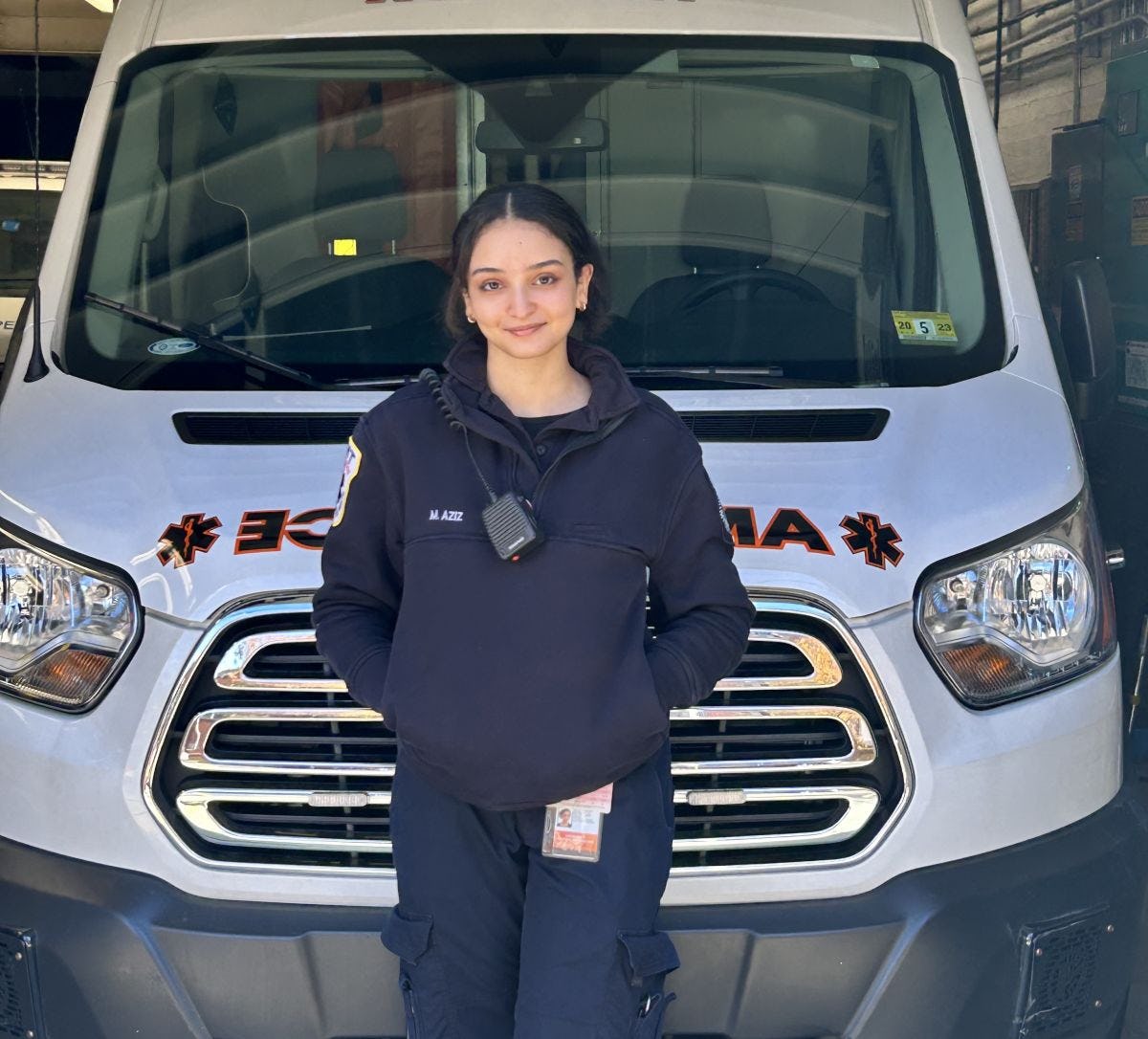 All three students highly recommended the internship, crediting it for helping each of them refine their career goals.

“There’s little that can compare to real clinical experience if you’re considering a career in medicine to really give you a sense of what you’re getting yourself into,” Greenberg said.

Aziz noted the experience would be equally beneficial to students who are already on the pre-med track and to those who are undecided.

“Even if you’re completely sure, it could change your mind. Even if you’re unsure, it could make you want to go into the field more,” she said. “For me, I was sure about medicine, and having this experience definitely confirmed what I wanted to do.”

For Hui, the experience was transformative.

Previously, he had shadowed his primary care physician for 90 hours but found the experience only “somewhat interesting,” he said.

The immersive experience of the JCMC internship in the more hands-on, faster-paced hospital and clinical environments, however, showed him a style of medicine that sparked a passion in him. Hui is now considering a career in surgery.

“It made me understand that what I want in medicine is interaction where I can directly help the patient, where you can feel better patient connection, and the satisfaction that with my own hands I was able to help save or better someone else.”

Aziz, who works as an emergency medical technician, was even able to apply knowledge gleaned from the internship almost immediately.

“About two weeks after I finished the program, we got dispatched to a labor call,” she said. “I actually got to deliver a baby on scene. I was like, I’ve seen all of us before. I’d watched 20 deliveries. That was really exciting for me.”