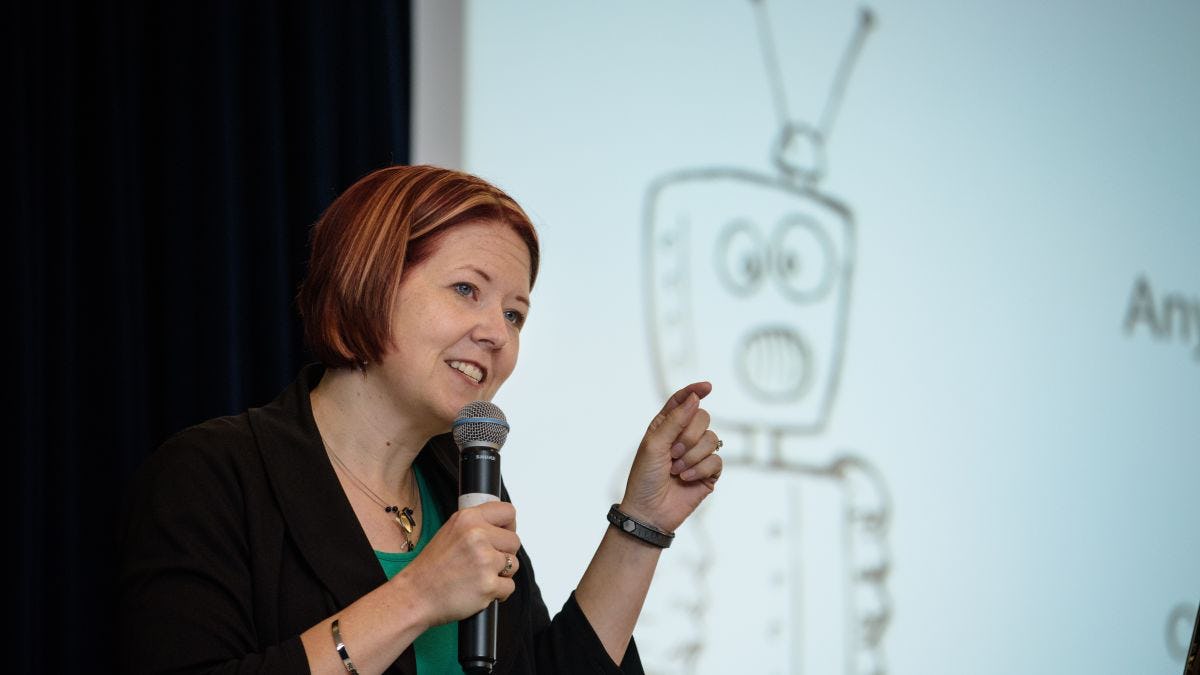 Calculus should be accessible to every single student.

That was the theme of the second annual Reimagining Calculus Education conference at Stevens Institute of Technology. Hosted by the Department of Mathematical Sciences and organized by award-winning teaching assistant professor Jan Cannizzo and teaching associate professor Denis Serbin, the conference is part of the department’s broader efforts to improve how math is taught in higher education. 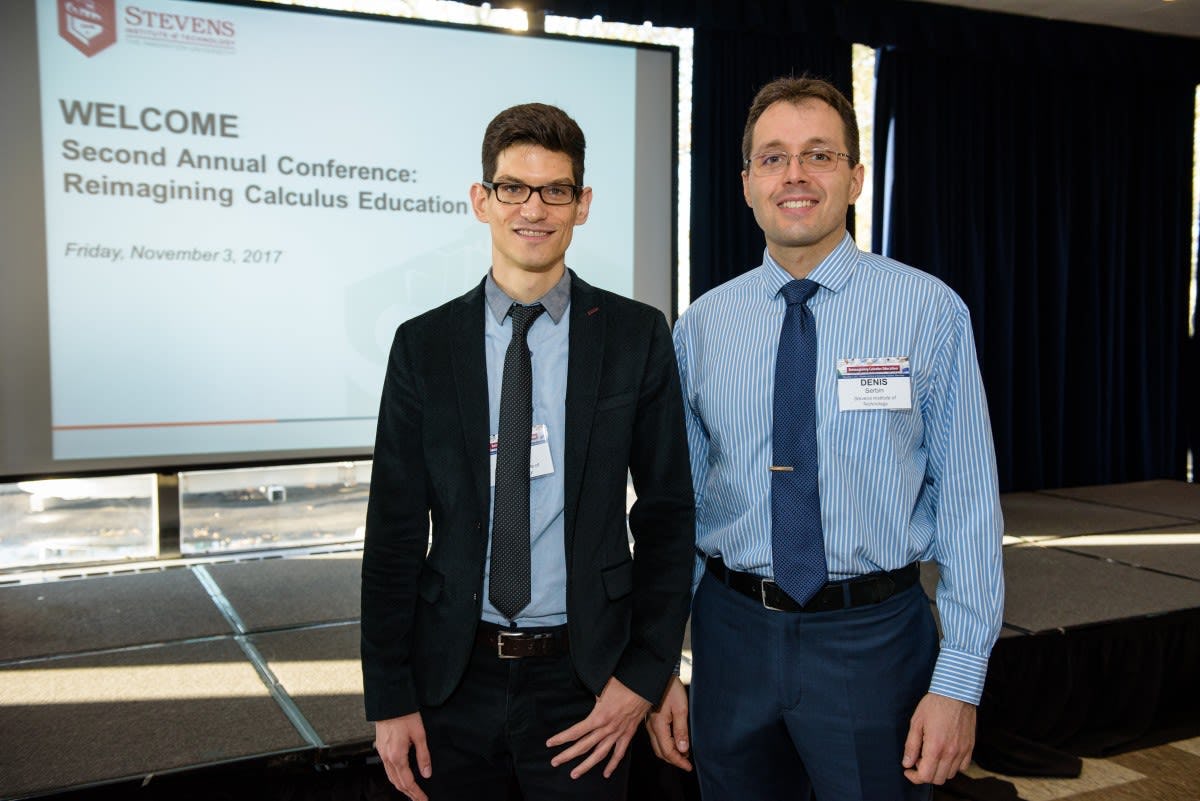 One-hundred and fifty math educators from across the country came to Stevens to learn better, more concrete ways to improve how their students learn calculus. "The attendees were primarily high school, community college and university calculus instructors," says Cannizzo.

While they were all curious about concrete ways to improve how they taught calculus they had different concerns. Cannizzo listed a few, including "Are there technologies to help my students?", "Are there simple classroom methods I can use to increase engagement?" and even "What if I lack institutional support?"

All of those concerns, and more, were addressed at the conference.

The keynote speech, given by renowned education expert and calculus instructor Maria Anderson, was about "Surviving and Thriving in the Age of Technology-Enhanced Learning," or how to reach increasingly digitally fluent students by using current and future technologies including online homework and personalized learning software. 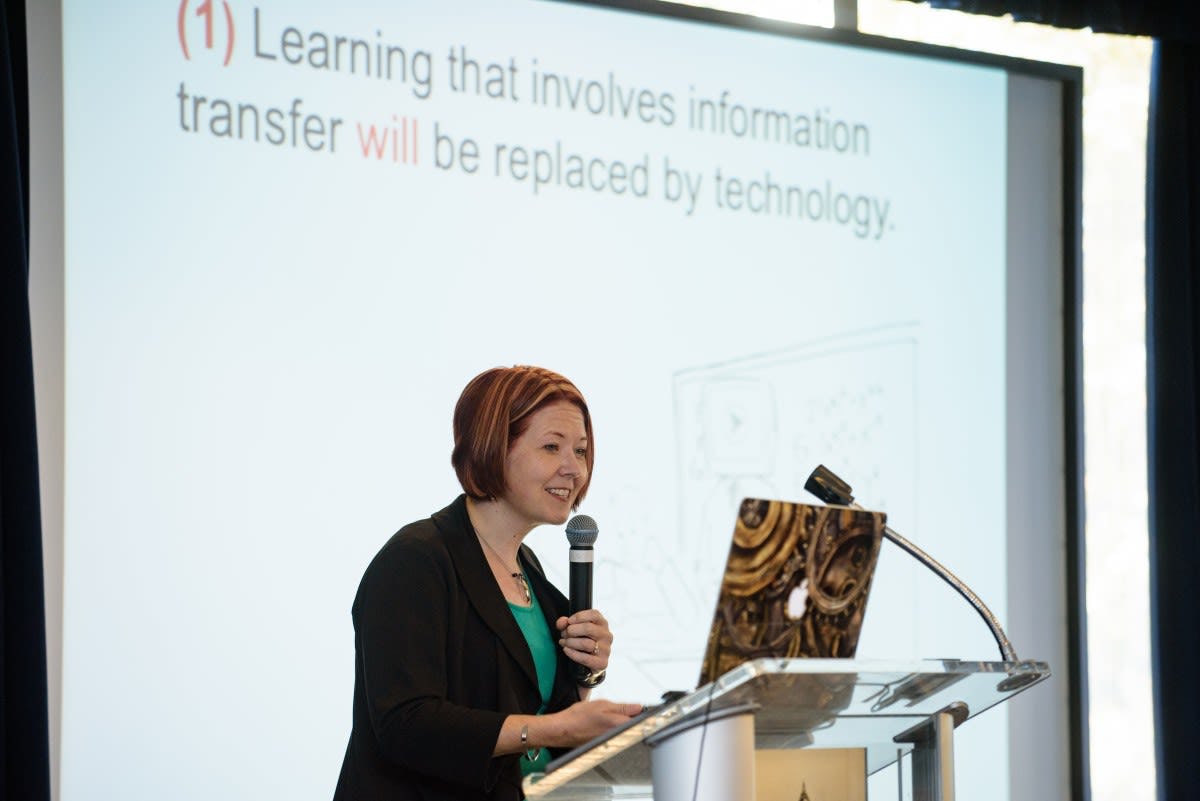 Other talks discussed video textbooks, game-based learning, outreach in The Gambia, calculus-themed 3D-printing projects and ways to help disadvantaged students master calculus. There was even a panel discussion that explored the efficacy of alternative teaching methods. 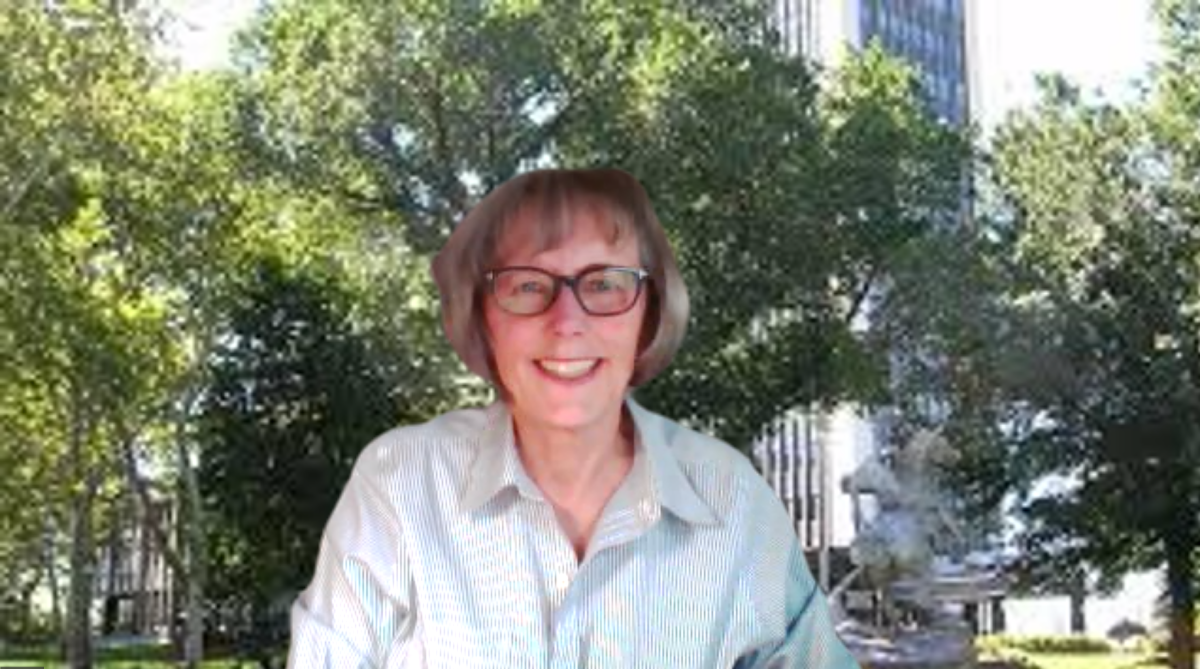 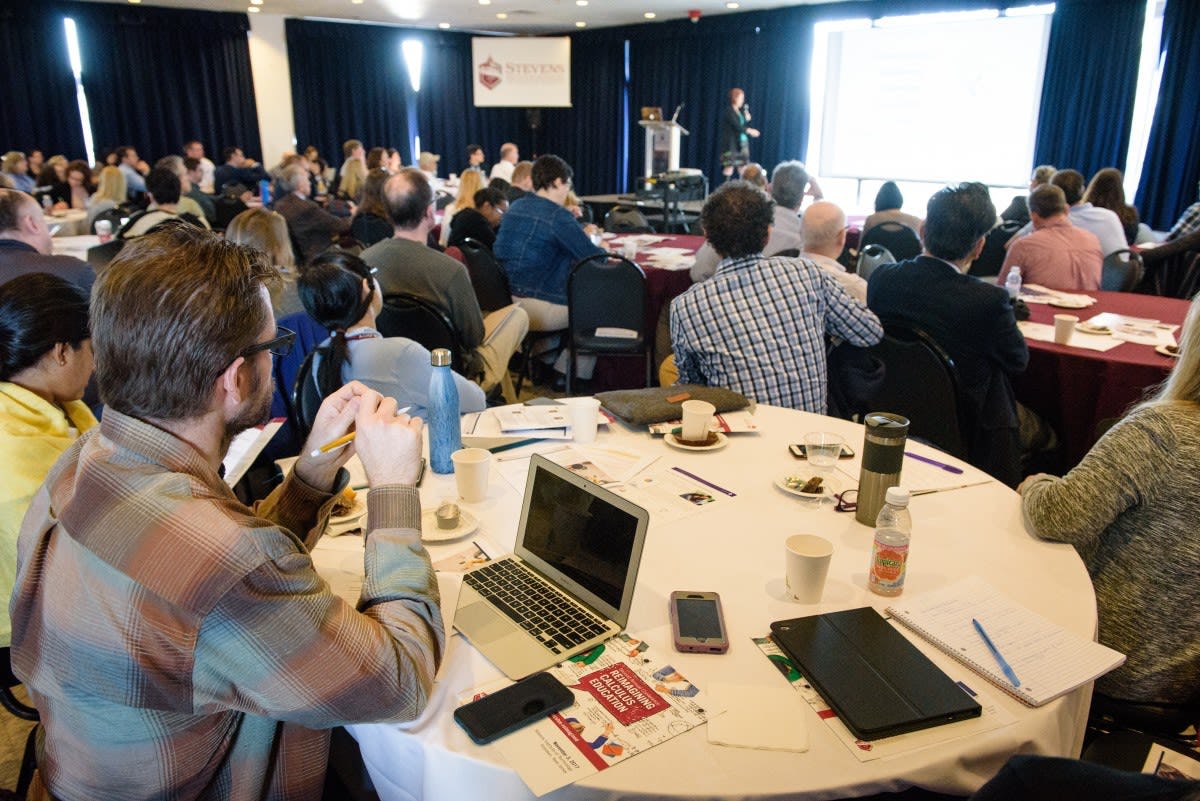 Attendees watch a speaker at the Reimagining Calculus Education Conference.

That comprehensive approach to calculus education is why Stevens thinks the conference was an even bigger hit this year.

"We did much better in terms of numbers," says Serbin. "I was surprised by that." "It was a full house," Cannizzo adds.

Not only was it a full house, but attendees were able to interact at round tables, making it more participatory than the previous conference. They were also able to interact with representatives from conference sponsors Gradarius, Coursetune and the Worldwide Center of Mathematics, all of which are involved in improving math education for every students.

"Our main sponsor got a lot of attention," Serbin confirms, citing the flood of questions Gradarius received at the conference. "They were very happy."

"My hope for the conference was that it inspired participants to improve the way they teach mathematics," says Cannizzo. "Based on the many positive responses we got, I think we did." 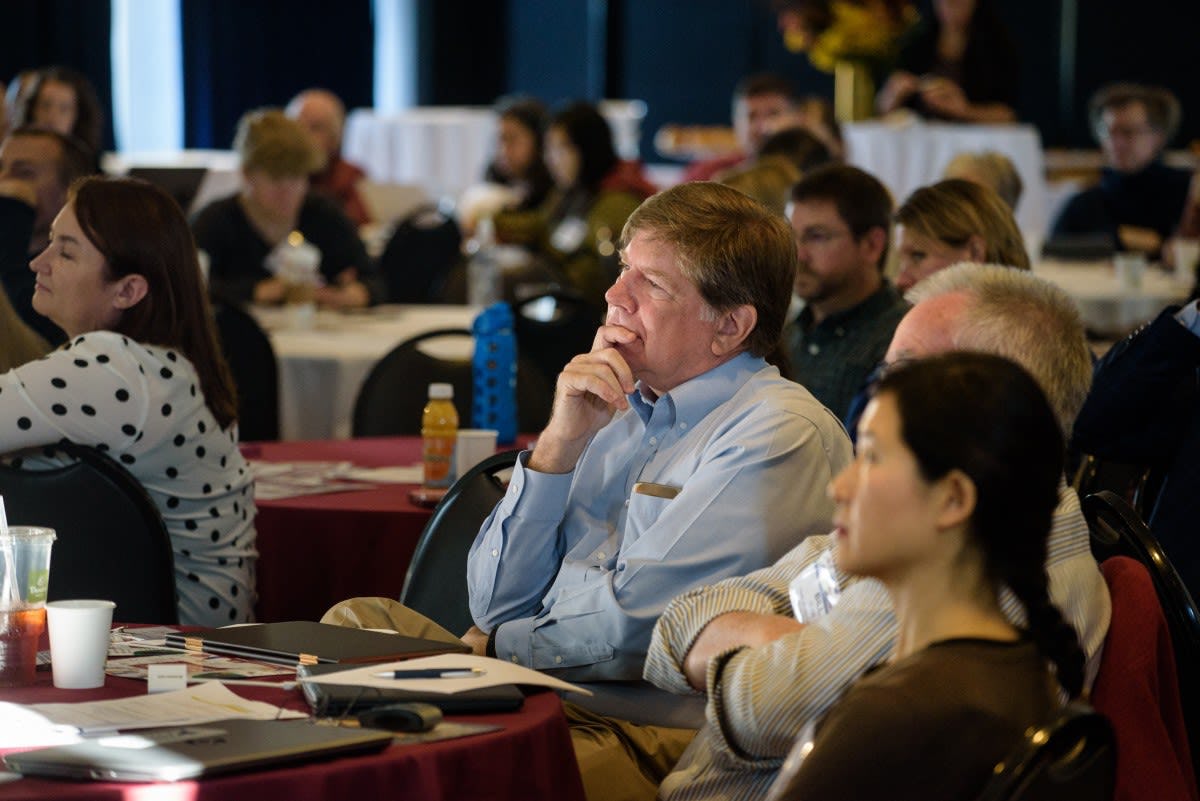 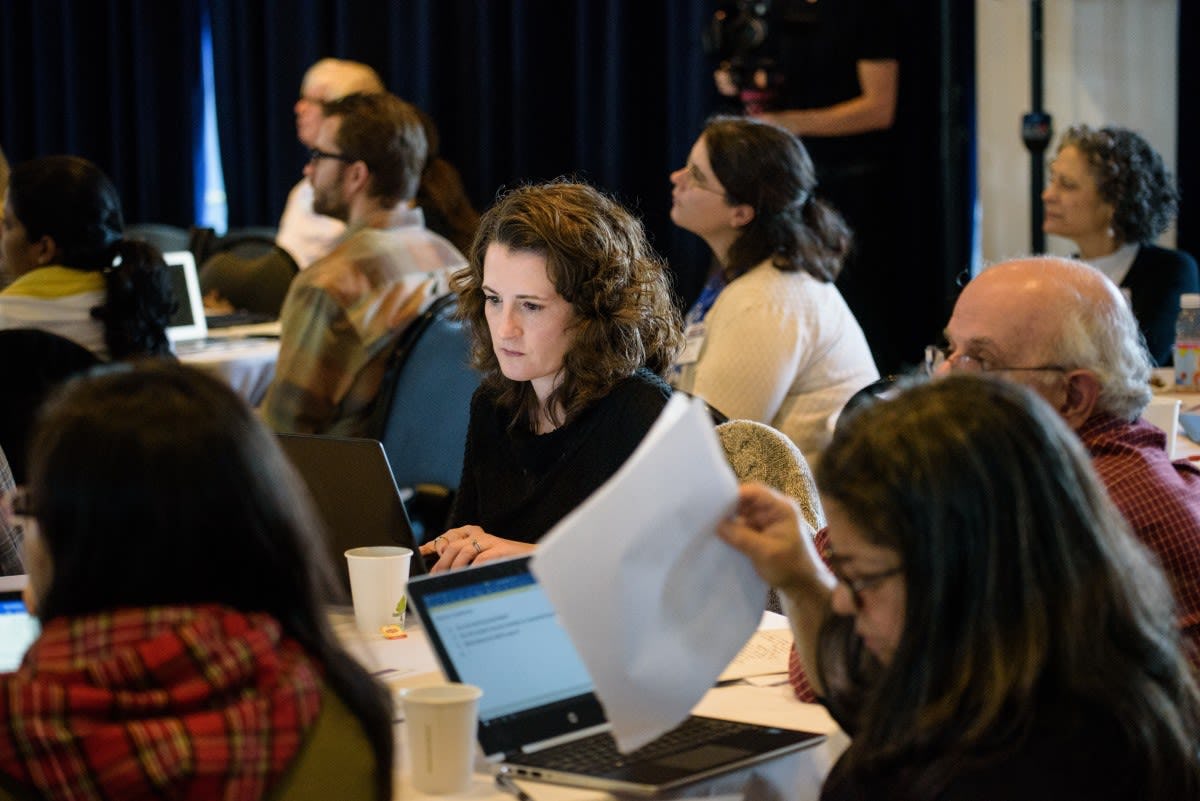 "I really thought it was great," says professor and department chair Alexei Miasnikov, citing all the positive feedback he heard. "Just talking to people who were there—those who’d been on the panel, previous conference speakers—everyone thought it was great."

"People not only liked the content, but they also expect the conference to be held again next year," says Serbin." The organizers kept hearing the same question: "When will you be doing this again?"

That question is one the department is taking to heart. "We feel quite strongly that we could make the conference even broader," says Cannizzo. "We hope to expand the conference next year, and even have educators outside of Stevens on the organizing committee." The conference organizers plan on reaching out to education leaders at Arizona State University and the New Jersey Center for Teaching and Learning to help organize next year’s conference.

"We’d also like to expand the subject matter to focus not just on calculus education but math education more generally," Cannizzo adds. "The demand is there."

In order to meet that demand, they also hope to partner with local organizations in Hoboken.

Between nurturing students’ problem solving skills at the annual Stevens Math Olympiad—which is one of the largest in the country not organized by a government entity—to creating local elementary school math circles, to developing the Stevens Calculus System and creating an interactive learning platform that helped improve freshman calculus scores, the department is making serious inroads on how students learn math.

By expanding the Reimagining Calculus Education conference, they could make a bigger impact on even more students.

"The second year of this conference really proved there’s something here—and something we can sustain," says Cannizzo. "We think interest will only grow, and that could really make a name for Stevens as far as math education is concerned."

"I think we are ready to go to the national level," says Miasnikov. "If Stevens can offer more sustainable support for these initiatives, we can go much further." 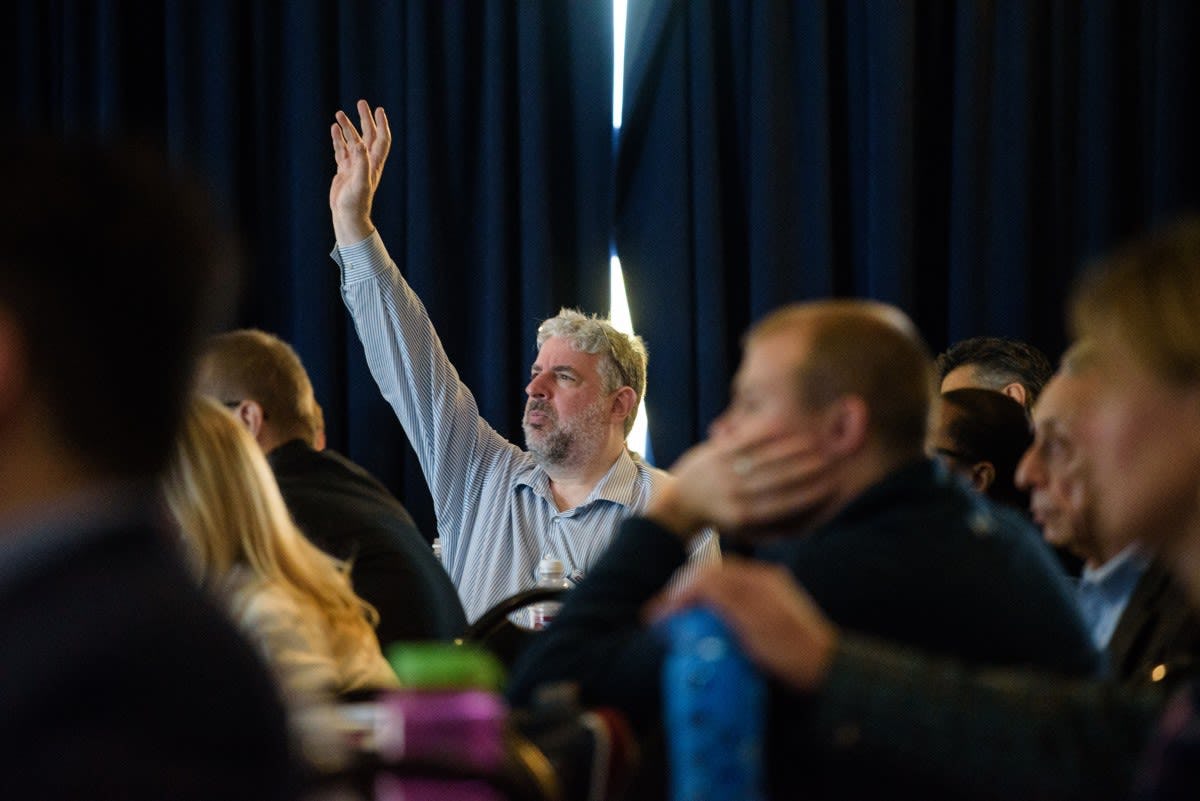