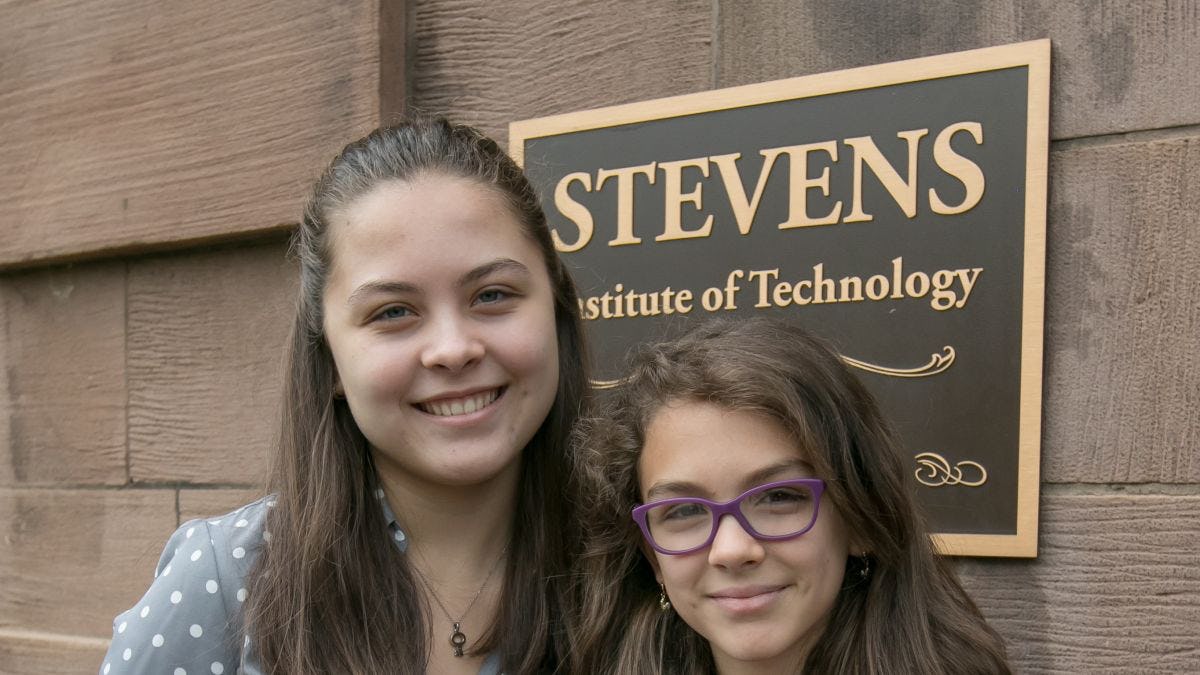 You seldom hear the words "fun" and "math" in the same sentence. But fun is the most common way New Jersey students describe the Stevens Math Olympiad.

Earlier this summer, 350 students participated in the second annual Stevens Math Olympiad at the Stevens Institute of Technology. Students from grades three through twelve came from all over New Jersey to Hoboken to challenge themselves by solving creative mathematical and logical problems. A few even came from the wider tri-state area.

All of them exceeded their own expectations.

"It was a fun and different way to test myself," said high school junior Brian Wormser.

"It was challenging but fun," said third grader Arkady Kokush. "I want to do it again next year!"

"The contest was tough but I took my time," said third grader Kylan Huang. "It was a fun experience and I enjoyed it!"

"The questions were fun and challenging at the same time," said fourth grader Jake Frischmann. 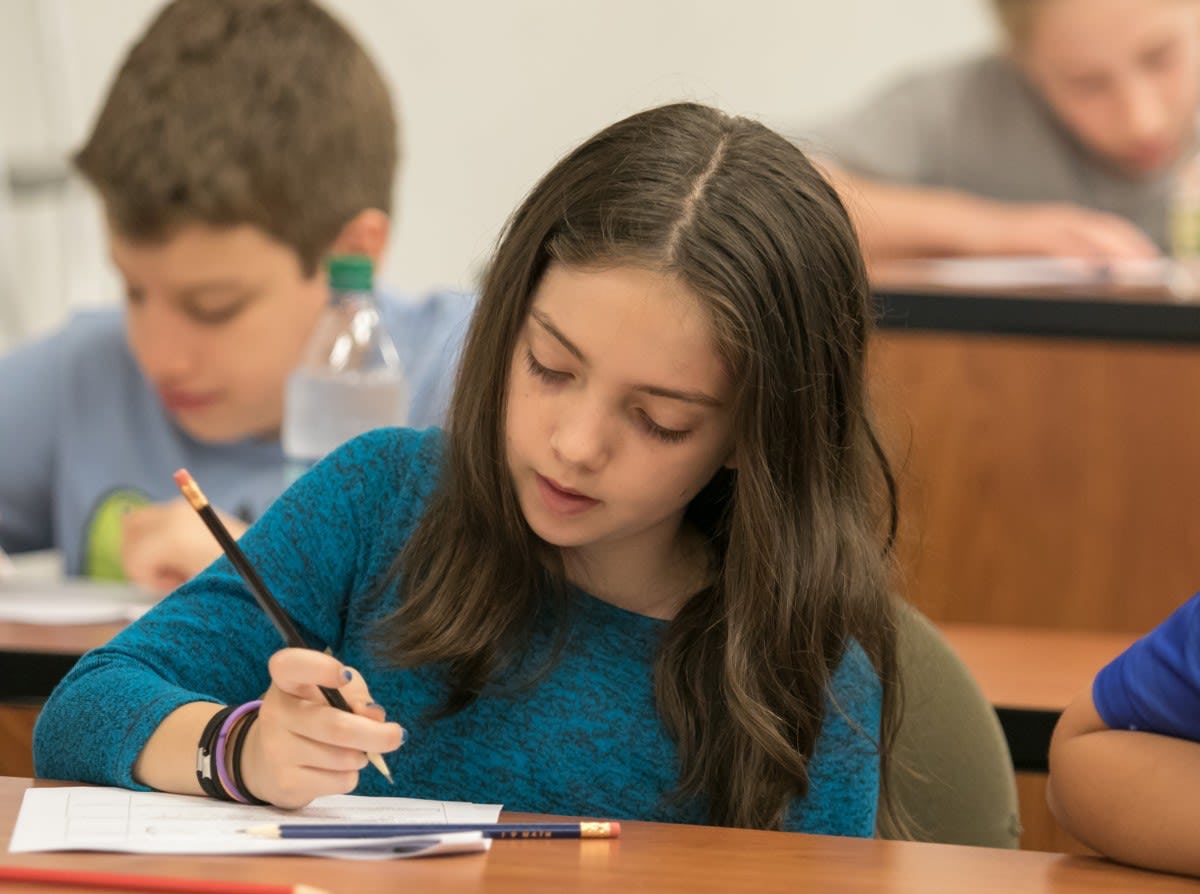 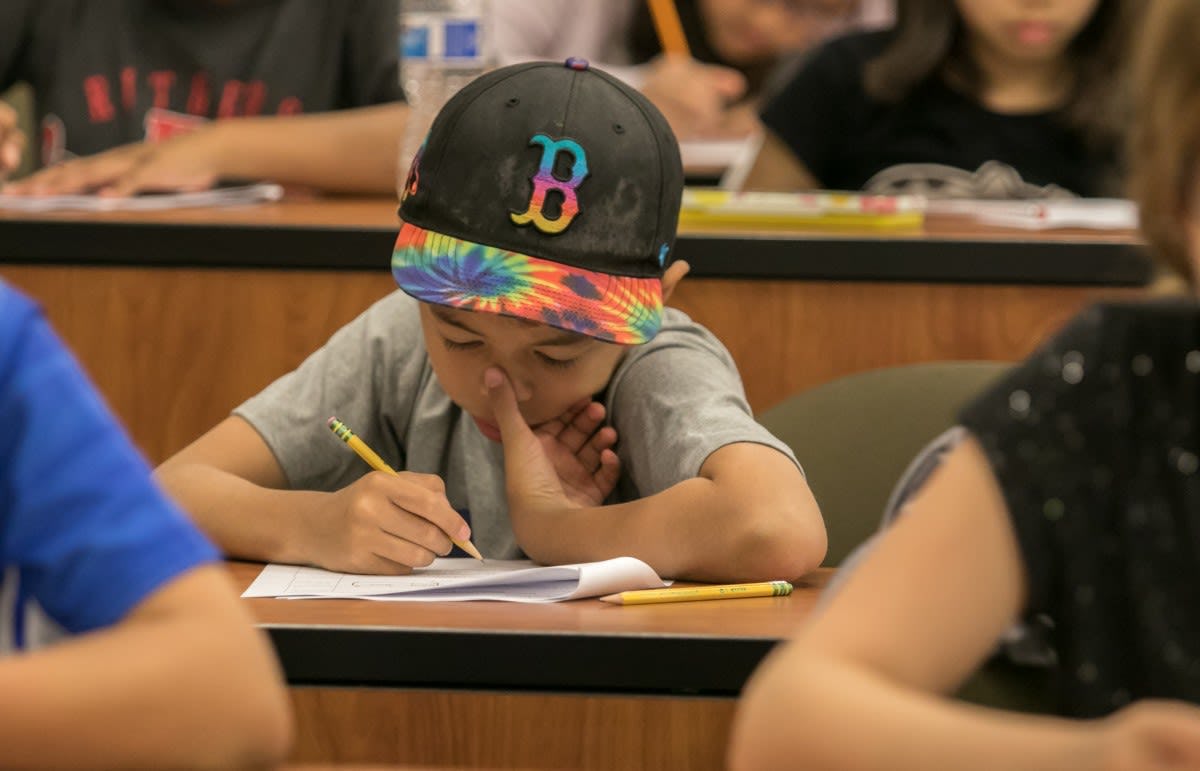 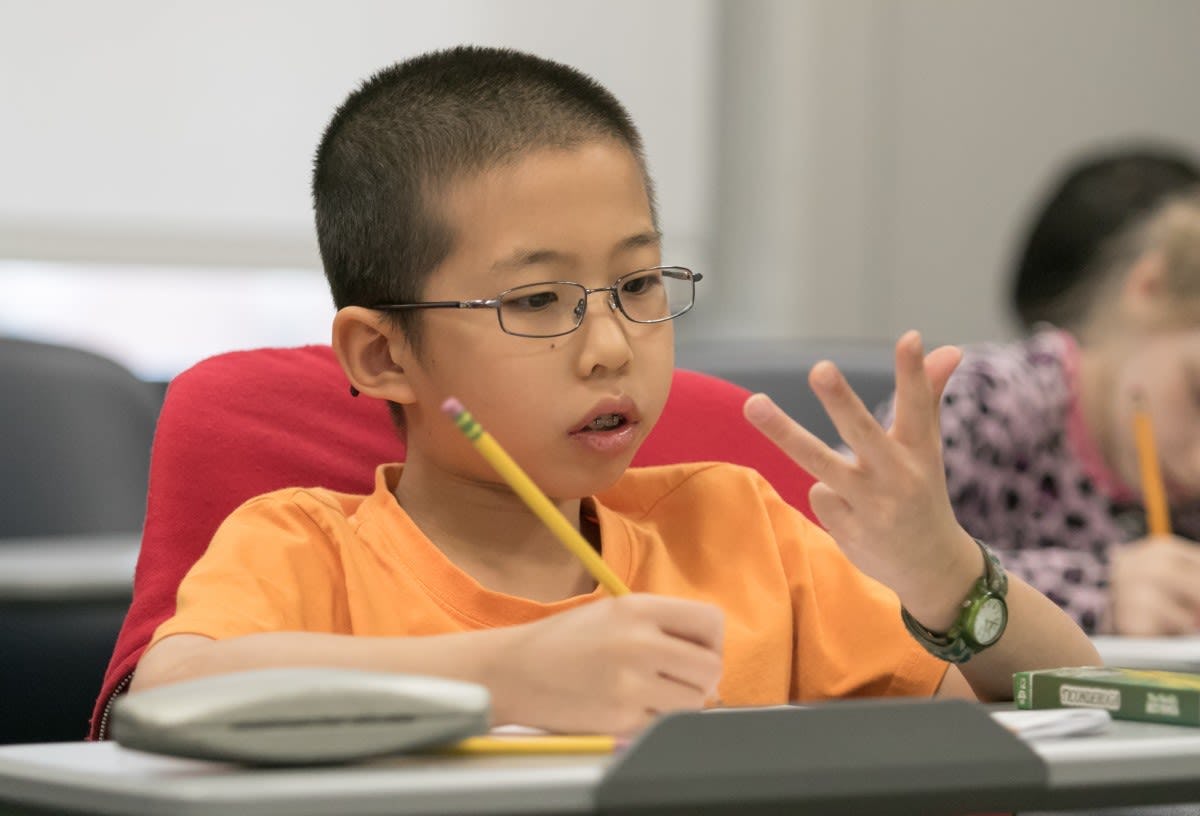 Hosted by the Department of Mathematical Sciences, the goals of the Stevens Math Olympiad were to stimulate enthusiasm for mathematics, introduce important mathematical concepts to bright middle and high school students, and strengthen mathematical intuition while stimulating creativity and ingenuity. Those goals were attractive to New Jersey students, as the event "had even greater demand this year" than last, according to award-winning teaching assistant professor and event co-organizer Jan Cannizzo. It even had a waitlist.

"We were once again able to welcome hundreds of students to the Stevens campus to try their hand at solving challenging and stimulating mathematical problems," said Cannizzo. Students with the top three scores for each grade level were tallied earlier this month and given certificates at a special ceremony. The winners are: 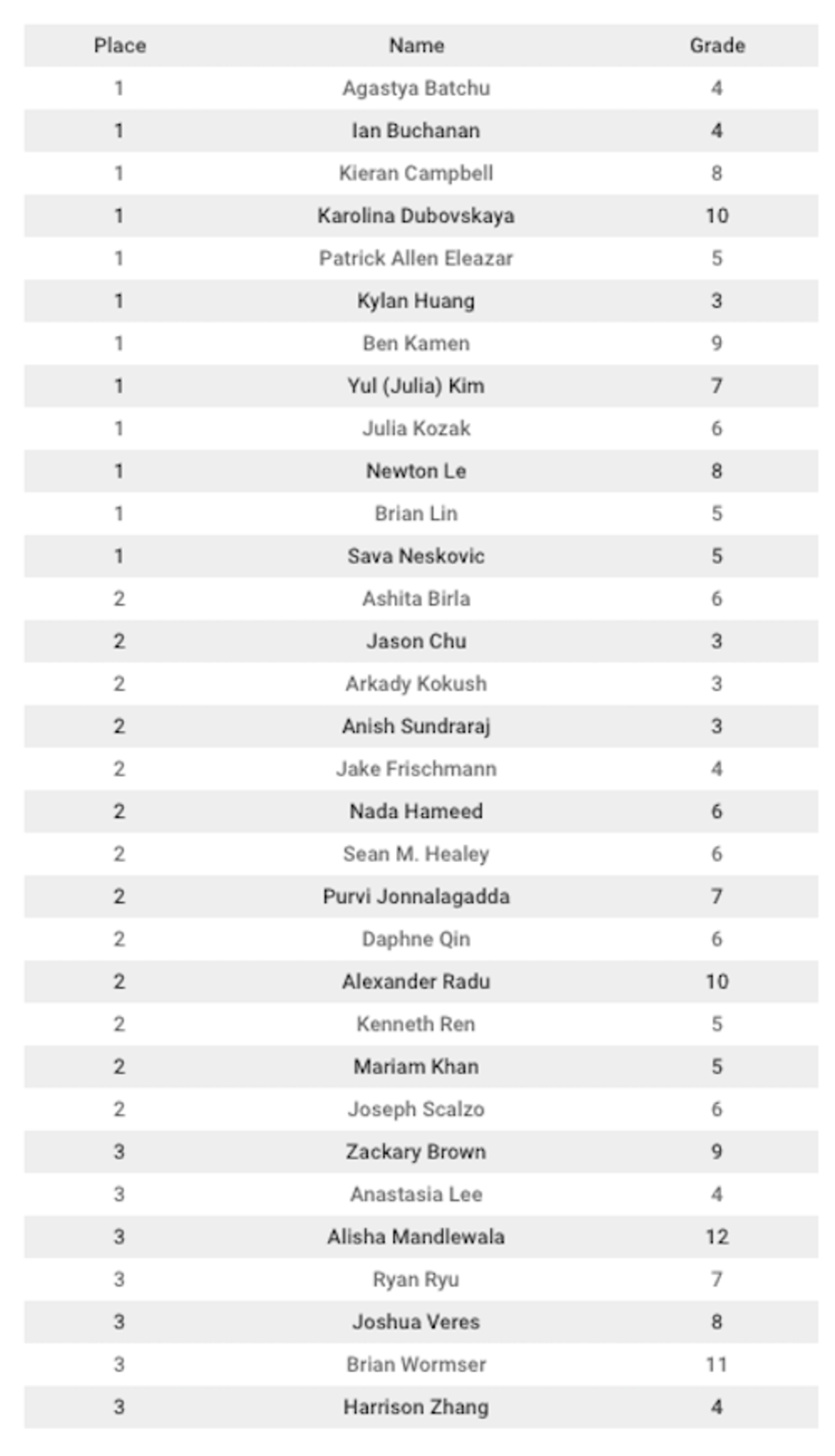 Yet for all that successful problem solving, Stevens "was happiest about the enthusiasm and effort displayed by the students," according to Cannizzo. So were the schools, as math teacher Chris Kunkel of Hoboken Charter School put it: "Hoboken Charter School is very proud of Agastya's work on the Stevens Math Olympiad!"

Of course, parents were happy about their children’s achievements, too.

"My son Jason attends Hoboken Catholic Academy," said parent Jennifer Lu. "He is delighted to be able to score one for the home team."

"Our son, Joshua, enjoyed the Math Olympiad," said parents Laura and Daniel Veres. "He said it challenged him beyond his regular curriculum and encouraged him to use his own intuition and think outside the box. He is looking forward to competing again next year!"

"My son, Joseph, found the sixth grade test to be challenging," said parent Jennifer Scalzo. "Yet it enabled him to utilize his math skills and prior knowledge to do well on the test. Thank you for giving him the opportunity to participate in such a fantastic environment. We look forward to returning next year!" 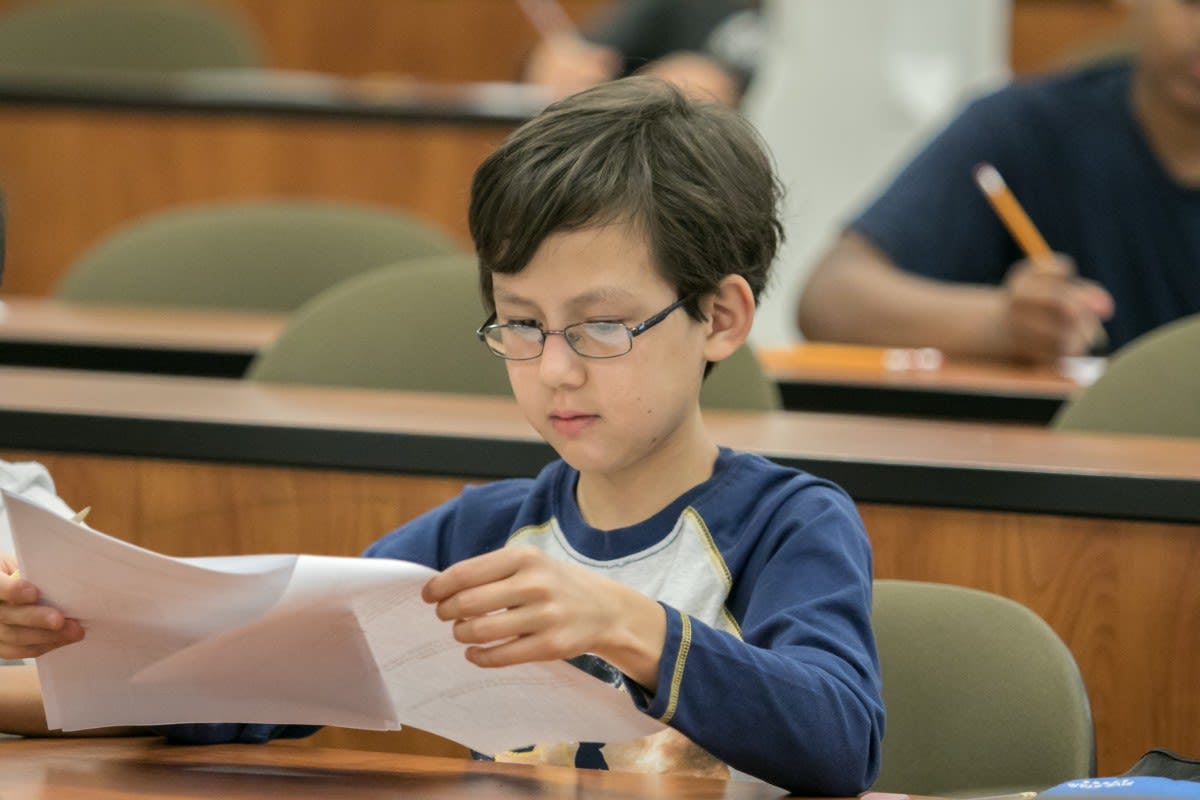 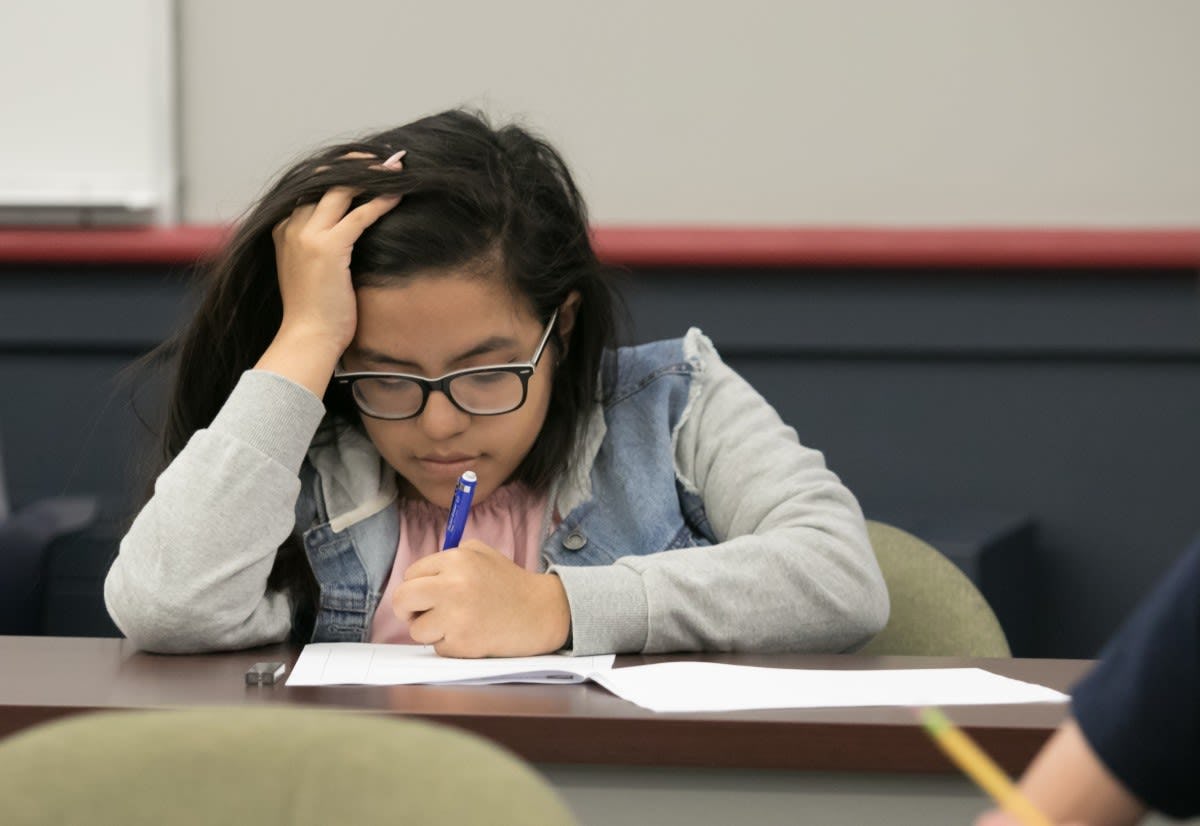 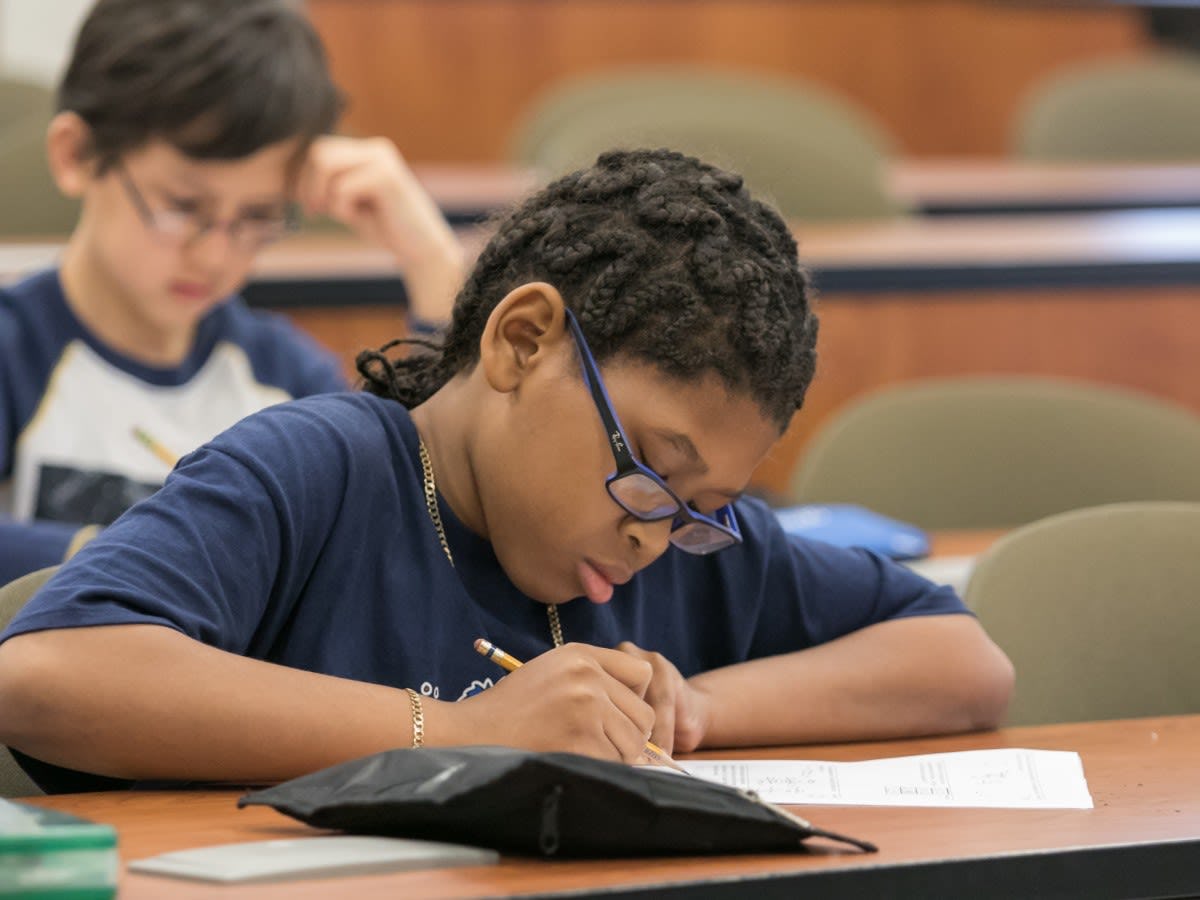 Still, there really was no shortage of enthusiasm from the students.

"The competition, like last year, was challenging," said sixth grader Nada Hamid, who won second place for her grade. "I am really happy to have won the second place."

"I liked being in a college classroom. The individual chair and desk was cool. It helped me do my best work," said fourth grader Jake Frischmann.

Perhaps the biggest takeaway from the second annual Stevens Math Olympiad was the sense of achievement the students got from challenging themselves.

"The Stevens Math Olympiad included fun and interesting problems that I enjoyed solving," said sixth grader Julia Kozak, who won first place for her grade. "I liked the written answer format which made the test more challenging."

"The Stevens Math Olympiad was one of the most enjoyable tests I have ever taken," said sixth grader Ashita Birla. "Instead of dreading it, I was very excited to participate and challenge myself with such mind-boggling questions. It was truly an engaging and fun test!"

"I've done several tests, but this was my first success!" said fourth grader Agastya Batchu, who won first place for his grade. "It was a good test, with well-explained questions. Importantly, they were fun to answer!"

Some students even had such strong experiences that it’ll shape their education—and achievements—for years to come. Fifth grader Patrick Allen Eleazar, who won first place for his grade, had such an experience:

"During the competition, I felt so nervous. I kept on checking my answers to make sure I understood all the problems and solved them the best way I can. All of my friends from school were done, but I took my time. I had a feeling I might have got something wrong. So you could imagine how surprised and blissful I was when my mom excitedly announced that I got first place! I had a sense of achievement."

"The Stevens Math Olympiad was a fun and interesting experience that introduced me to more challenging mathematical concepts," said eighth grader Kieran Campbell, who won first place for his grade level. "It was more than just knowing formulas. It was also really cool to be on the campus of a college I would definitely consider. It was a great experience, and I look forward to doing it again."

Stevens is excited by that response, and the Department of Mathematical Sciences is already re-tooling the event to create more of those experiences: "Next year, we hope to offer more to participants and parents," said Cannizzo. "We are actively pursuing extra funding for the 2018 Olympiad. Moreover, the annual Olympiads are intended to mesh with an outreach activity of the Department of Mathematical Sciences that supports the creation of problem-solving workshops at public schools in the tristate area. We hope to get the first of those workshops up and running this fall, and encourage interested teachers to contact us." 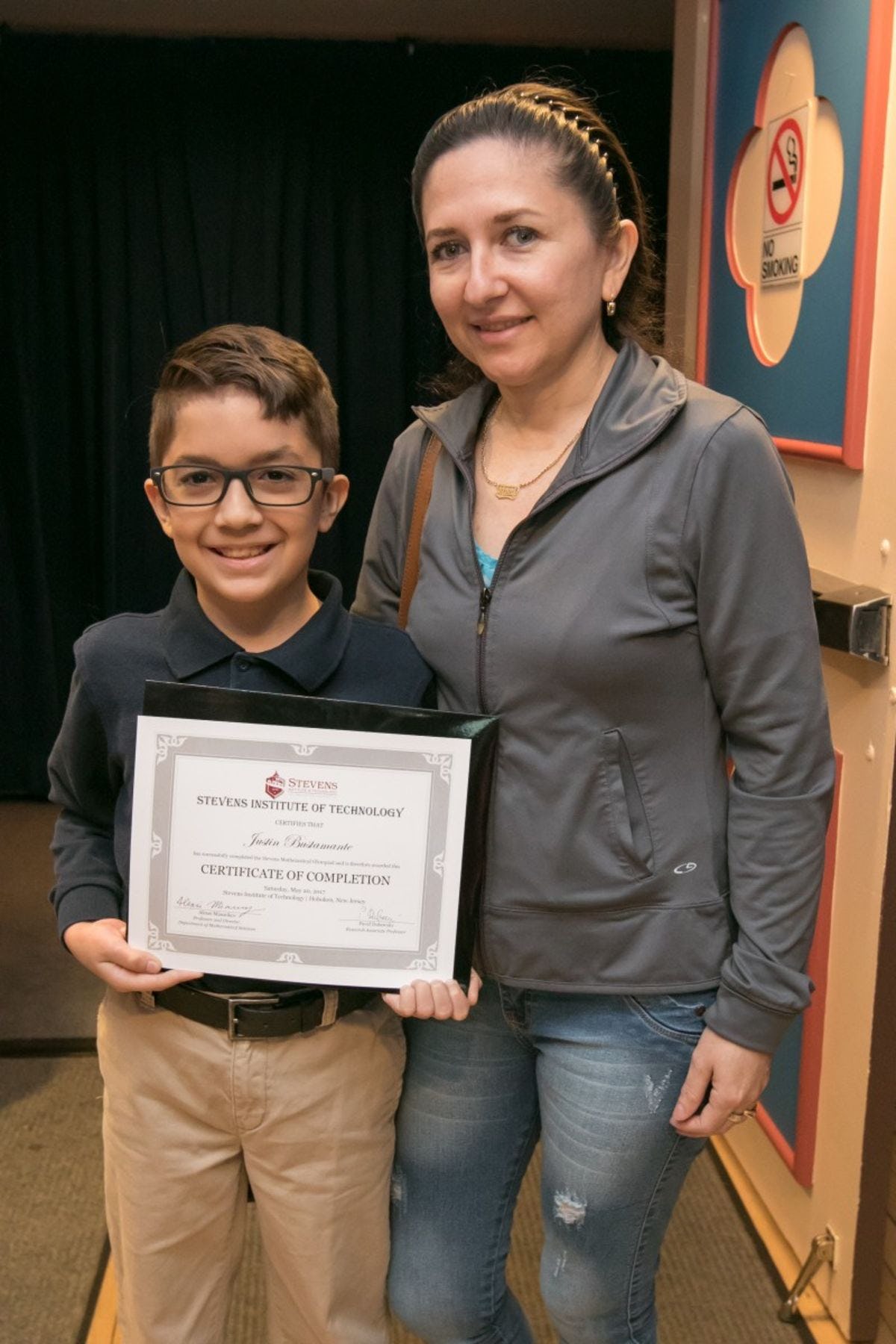 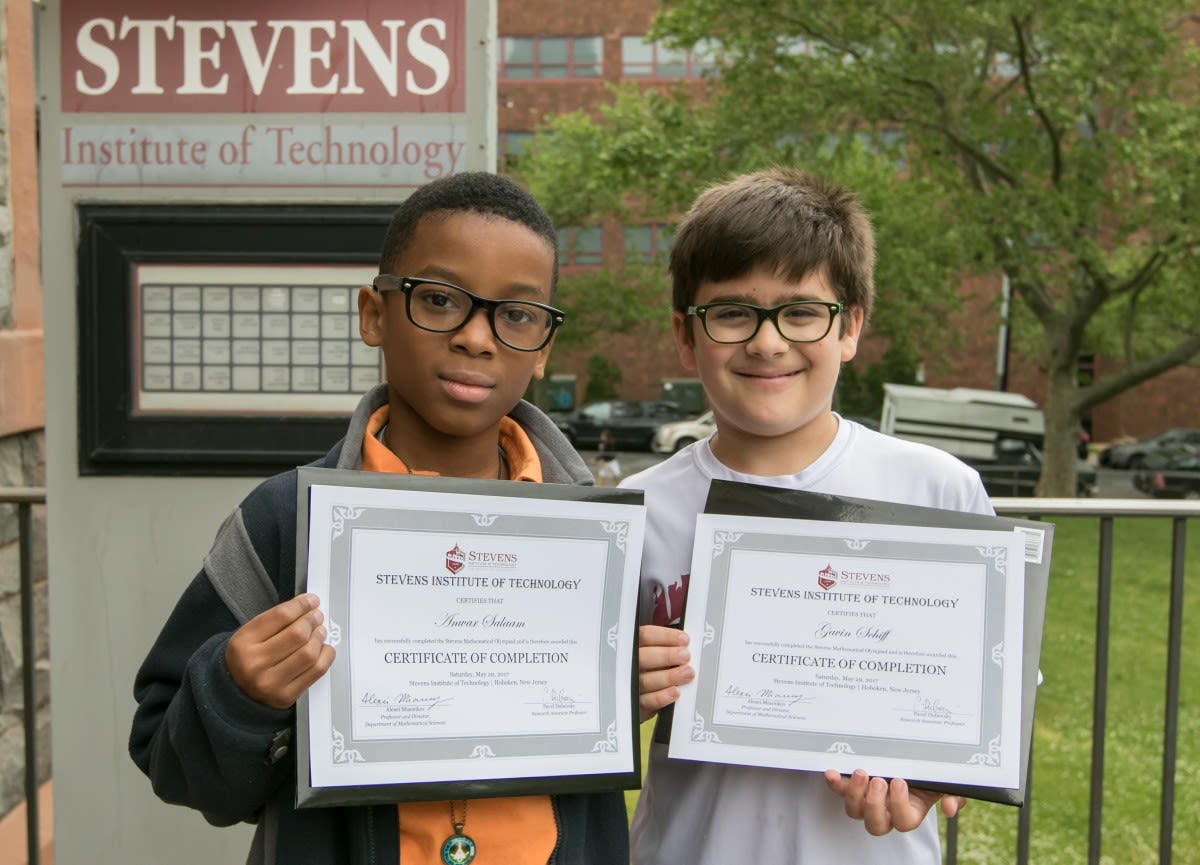 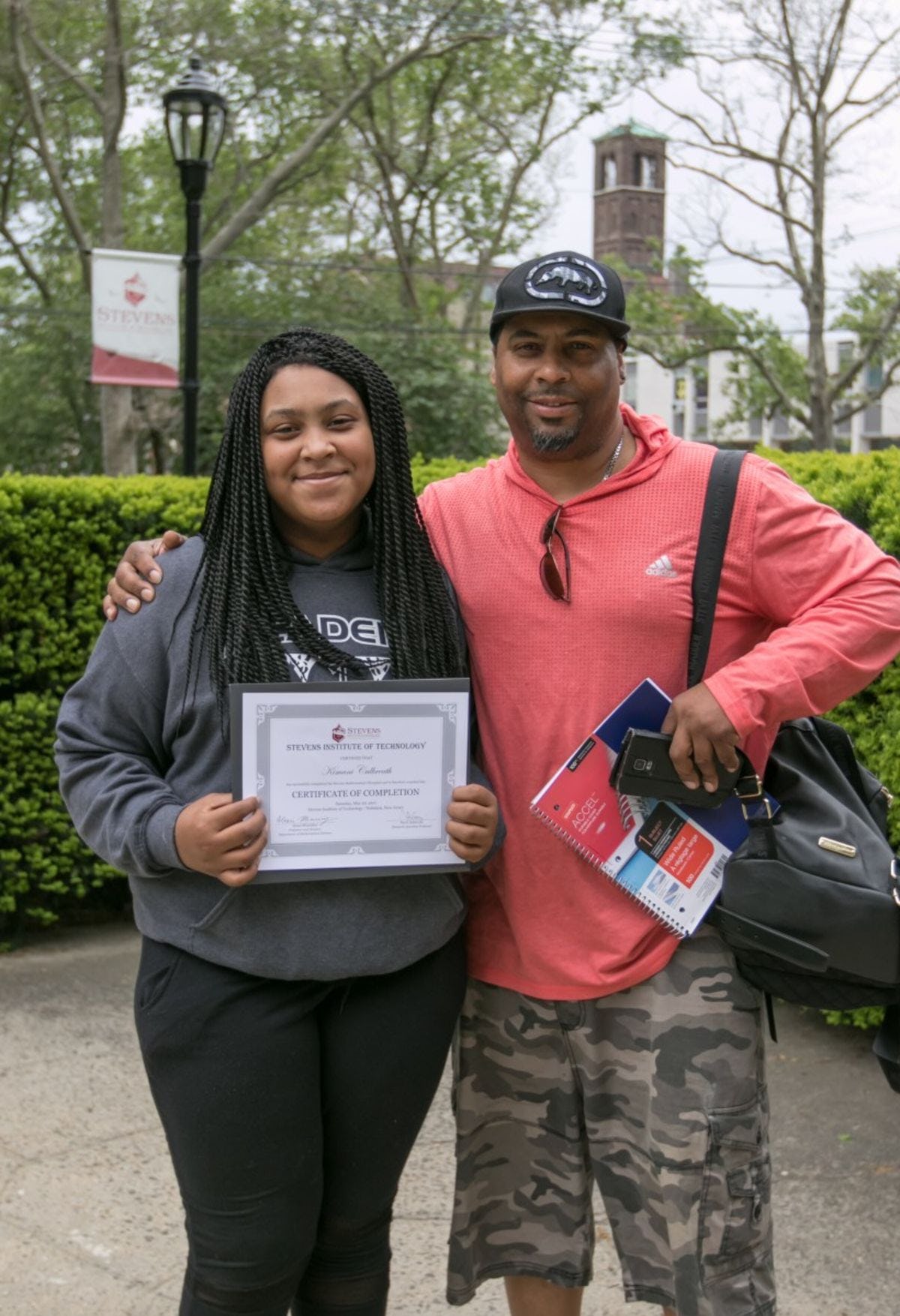 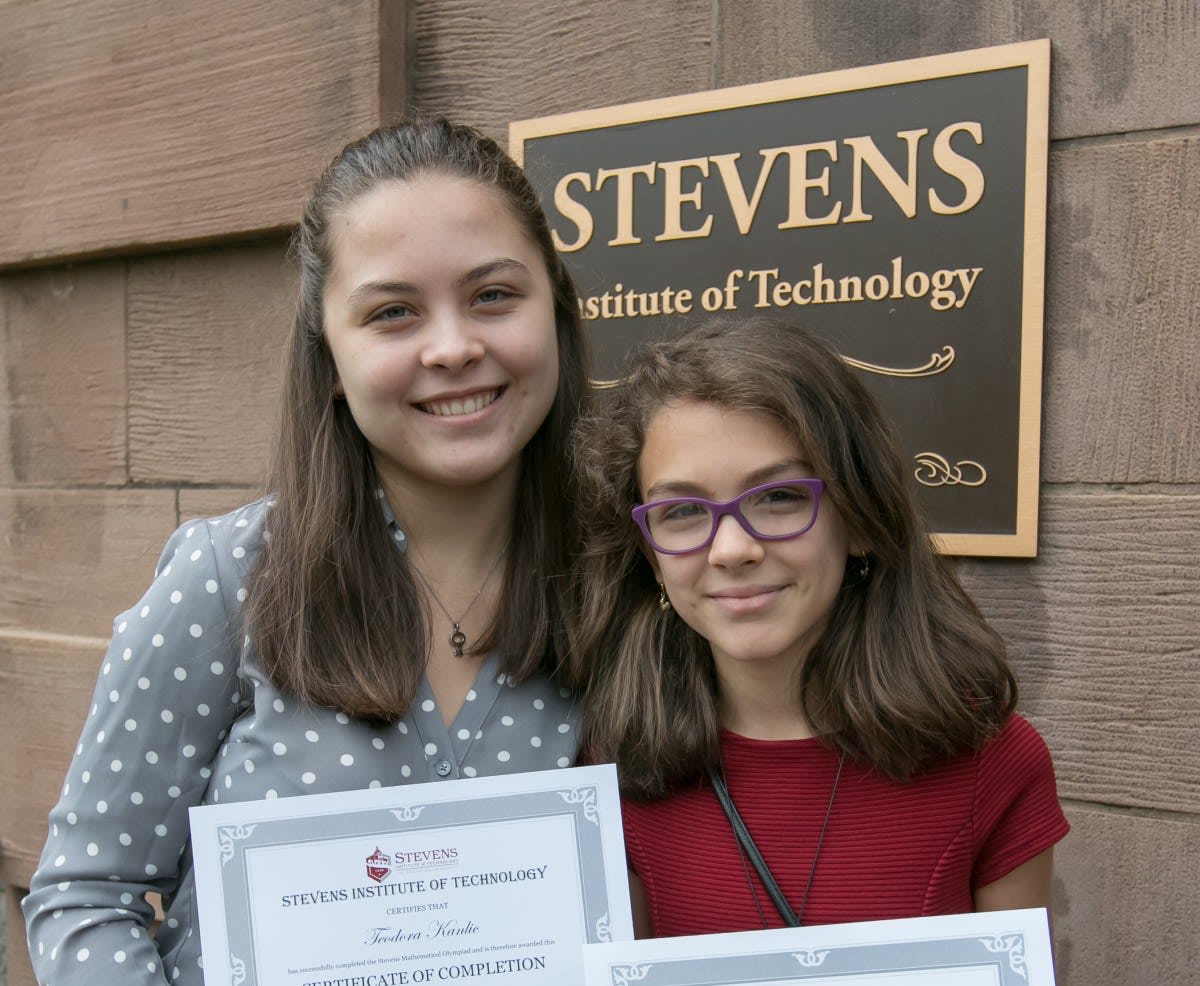 Some students were so encouraged by their successes at the Olympiad that they’ll be continuing their education with Stevens directly.

"Brian is signed up for the Exploring Engineering Careers session and he's looking forward to it," said Cindy Wormser, parent of high school junior Brian Wormser.

Having gone on a tour while the kids took their exam, we were pleasantly surprised not only by the campus, the location and proximity to the city, great access to public transportation, and the professionalism of the campus police, but also by the scope of courses and degrees, the sports facilities, the potential to be involved working at the Davidson Laboratory, and the success of the Co-op Education Program. It is quite impressive to have a 96% employment rate within six months of graduating, with many students having received offers before they have​ even graduated!

"Where our son had specific ideas of where he would be applying to college, Stevens is now on his radar—and ours," Campbell concludes.

All of that enthusiasm, inspired by a Math Olympiad. We can’t wait to see what these students accomplish next. 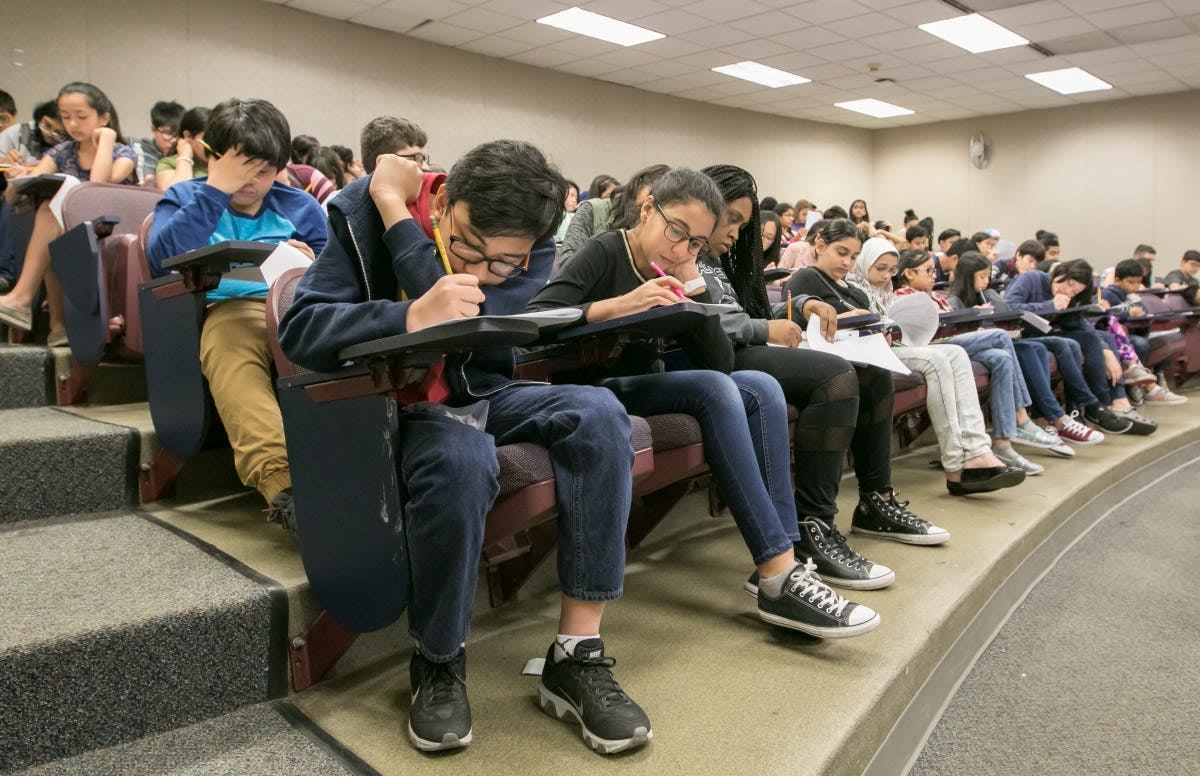 Note: all images of participants featured with consent.