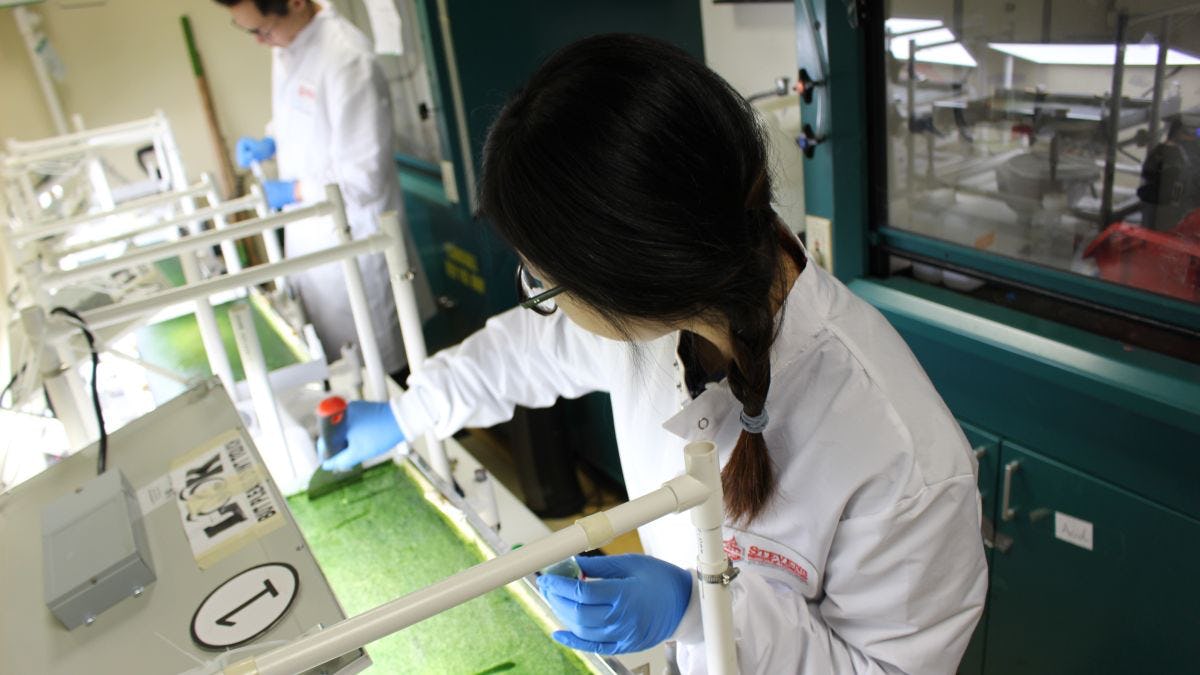 But these deceptively simple-looking trays may soon point the way to greener vehicles, school buildings and factories for us all.

For hours every day, including on weekends, the Stevens doctoral candidate in environmental engineering attends carefully to the trays housed in a third-floor corner of the university's environmental laboratory: adding water, maintaining pumps and tubing, checking digital monitors of oxygen levels, pH levels and temperature, inspecting for specks of fungus and taking copious notes in ruled notebooks.

Every Friday morning, Lin brings out a scraper and carefully scores the bright Kelly-green sheets of algae, spooning pieces carefully into test tubes for weighing, microscopy and testing. A sheen of thick oil oozes from the canvas as she works, and yes — except for the color, it looks almost exactly like motor oil. 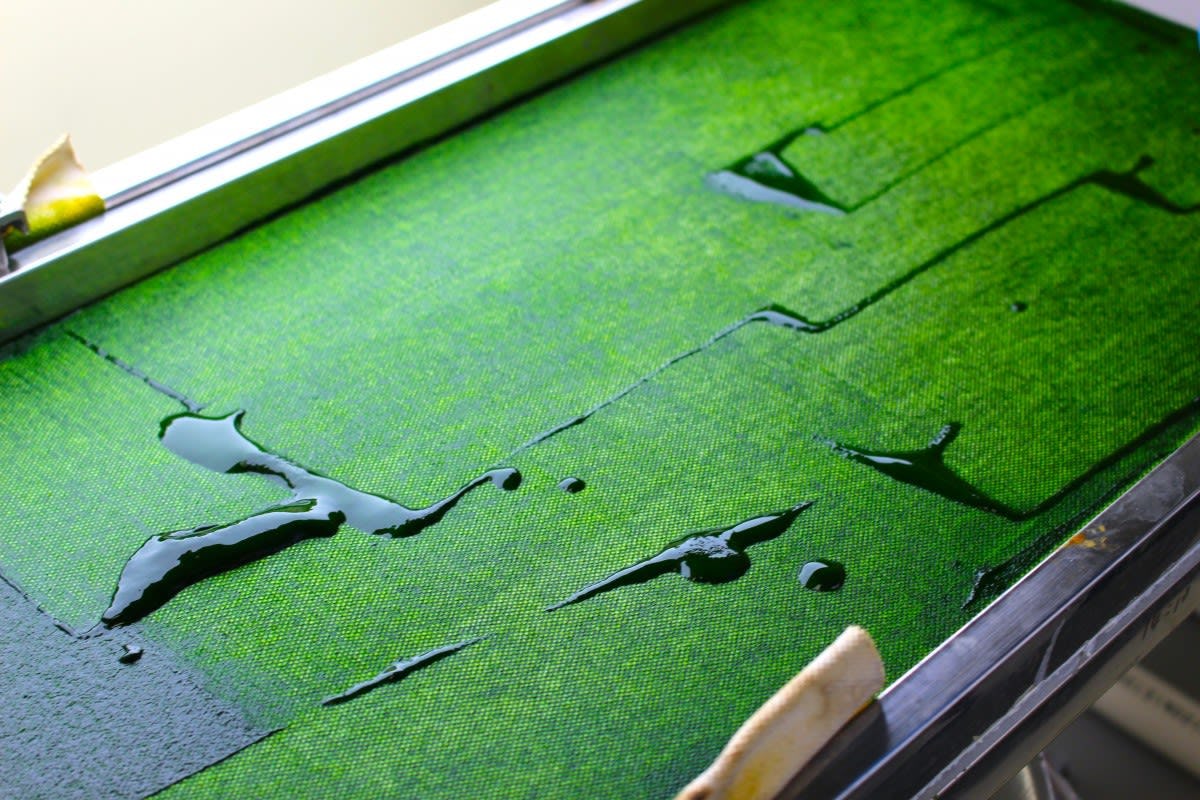 It's not hard at all to imagine this green goo powering the next generation of cars and manufacturing plants.

"She has been an outstanding student," notes Dr. Agamemnon Koutsospyros, a Stevens visiting research professor since 1992 who advises Lin on the work along with Center for Environmental Systems Director Christos Christodoulatos. "She even built the laboratory reactors we are using herself."

Lin, who will spend the summer interning with an Iowa startup working on similar biofuel-generation technologies, won a prize at an international biomass conference last fall in Houston for her co-authored paper on the research.

"I want to make a difference," she says of her Stevens biofuel work, which she hopes will result in a doctorate in spring of 2020. "I love working on applications, and this is real application."

Her goal at the moment? To develop and test improved methods of producing oil-rich microalgae that could fuel a new generation of power plants and combustion engines.

Nutrient mixes and light cycles may hold the key

"We think that's partly because of the many bumps and surfaces on a piece of canvas," she notes. "We also found that a thick canvas was a more effective medium than a thin piece, and that placing the canvas nearly completely horizontally was optimal."

The trials lasted five full months before the trays of canvas disintegrated beyond usefulness.

Now Lin's work has moved to the next stage: varying conditions in order to discover the best recipe for making algae.

"It's very exciting," she says of the new experiments, which began in April and will stretch beyond summer.

Once the algae have begun growing comfortably, which will take about one month, she will begin adjusting the mixture of nutrients administered in the bowl-like containers at the heart of the system.

"We are looking for balance," explains Lin. "Some ratios and mixtures will produce the most biomass, but when biomass productivity increases, the quantity of extracted oil decreases. Other conditions produce lower overall productivity, but a larger quantity of oil. We are seeking a middle way."

In one previous study, Lin discovered that the addition of simple baking soda (sodium bicarbonate) to the system decreased the overall biomass productivity of the algae — but increased the quantity of oil extracted.

She also tinkered with the system's nitrogen-phosphorus levels in other experiments, concluding that a 5:1 ratio in the system was optimal for growth.

"That was a nice finding," Lin says.

Now, this spring and summer, Lin and her team are closely studying the effects of varying the amount of light shined onto the algae, in an effort to determine how much light produces the most overall production — and how much creates the most oil. 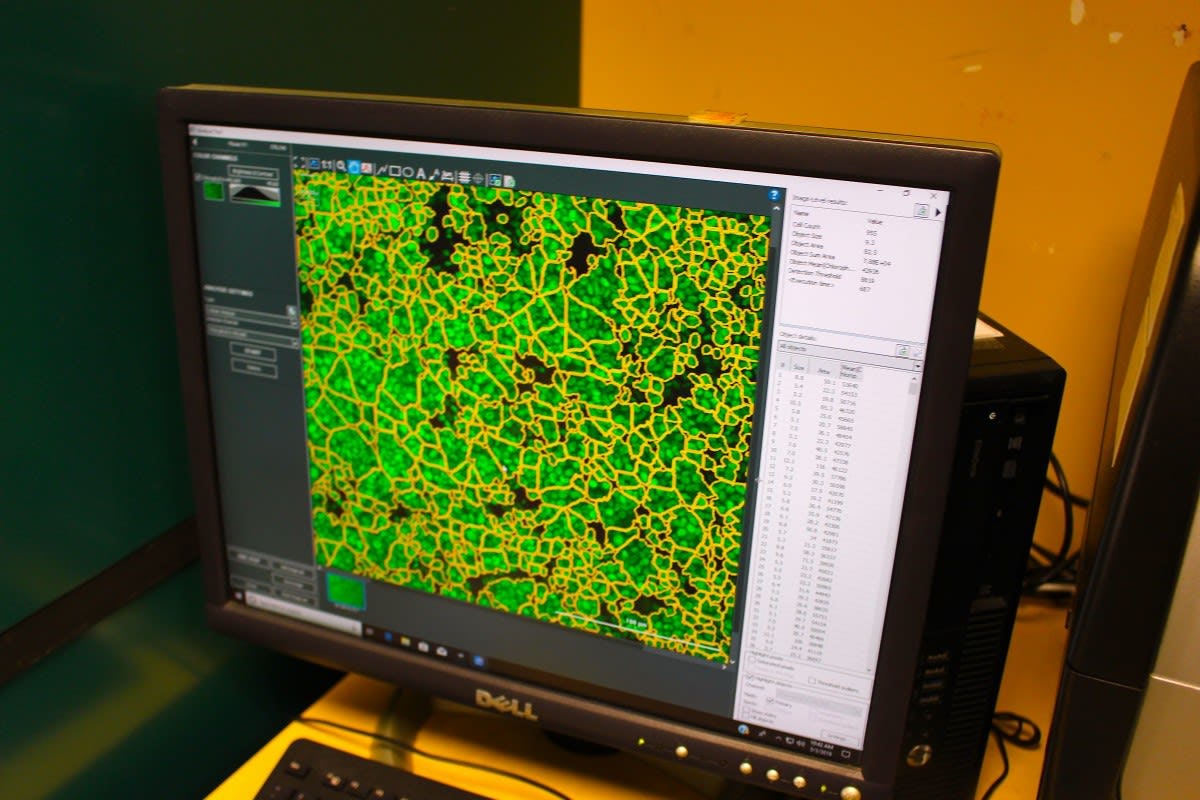 For this experiment, one sample tray receives light continuously, at all times of day and night; another receives light roughly 14 hours per day (the approximate natural spring light cycle); and the remaining trays receive different amounts.

While it's early, the results are already intriguing. The natural, 14-hour light cycle produces a uniform, healthy-looking, oily sheet of algae while 24-hour lighting conditions are creating ragged, uneven clumps of algal growth. However, those uglier-looking sheets actually have so far produced more biomass.

What's next for Lin herself?

"I originally expected to go into teaching or research, in academia," she says. "But after experiencing a bit of what the environmental industry is working with, I believe I will probably go into the business environment when I finish Stevens. I want to help companies build and improve better ways that benefit us all on the planet."

Biofuels are white-hot: one study estimates their global market value will soar past $200 billion by 2022.

And Lin's project is just one part of a comprehensive, multidisciplinary Stevens effort headed by Christodoulatos to cultivate and extract microalgal oils, including with military-base and industrial wastewaters. (ExxonMobil and the U.S. Department of Energy are among the others also working to cultivate, process and combust algae-based fuels.)

The university's projects to grow more, better, oil-rich algae — then extract energy in the form of biogas or biofuel from it — "literally began in test tubes," points out Koutsospyros, who participates in the research via a University of New Haven collaboration.

Later on, experiments progressed to a series of bench-scale, suspended-growth raceway reactors in one lab and the two-by-one-foot attached-growth bioreactors Lin works with in another.

With the concept proven, Stevens is now preparing for the next steps, when the project will be scaled up to pilot systems on campus and at a Tennessee facility in order to demonstrating how the process can work for real-world applications.