Gratitude and Glamour at the 2019 Stevens Awards Gala 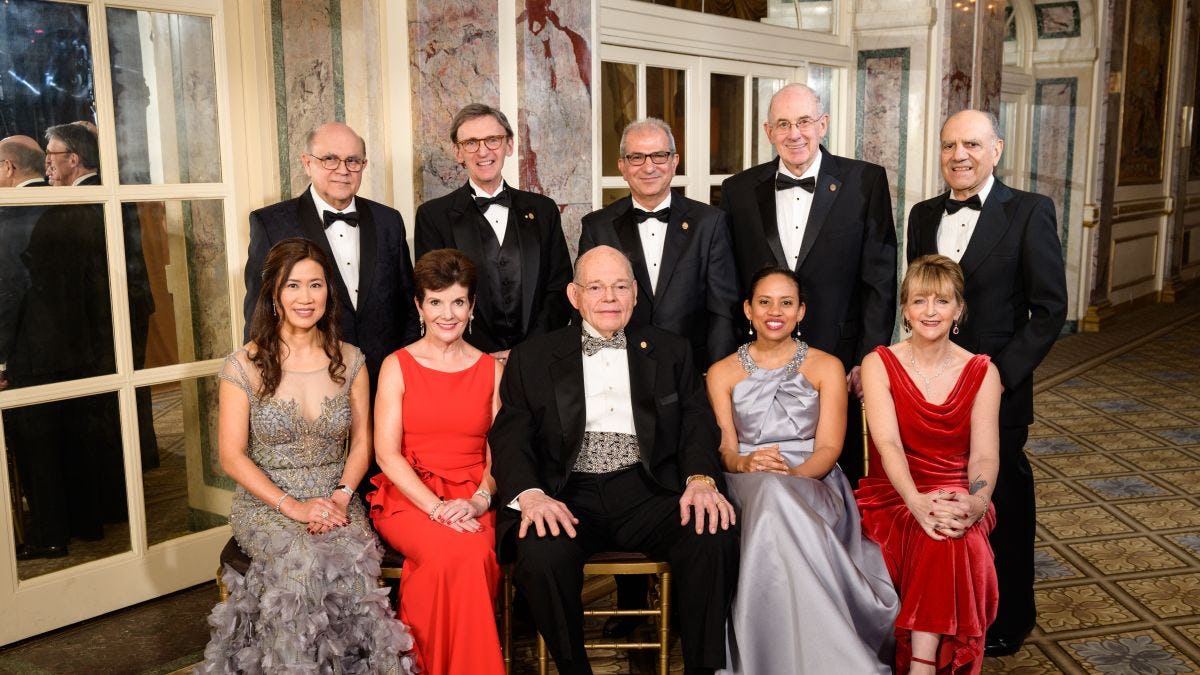 In a night filled with recognition and gratitude, glamour and humor, one thing was abundantly clear:  Stevens Institute of Technology alumni and friends are successful and generous beyond compare. And on April 6, inside New York’s historic Plaza Hotel, they received well-deserved accolades for their impact at Stevens and on the world. 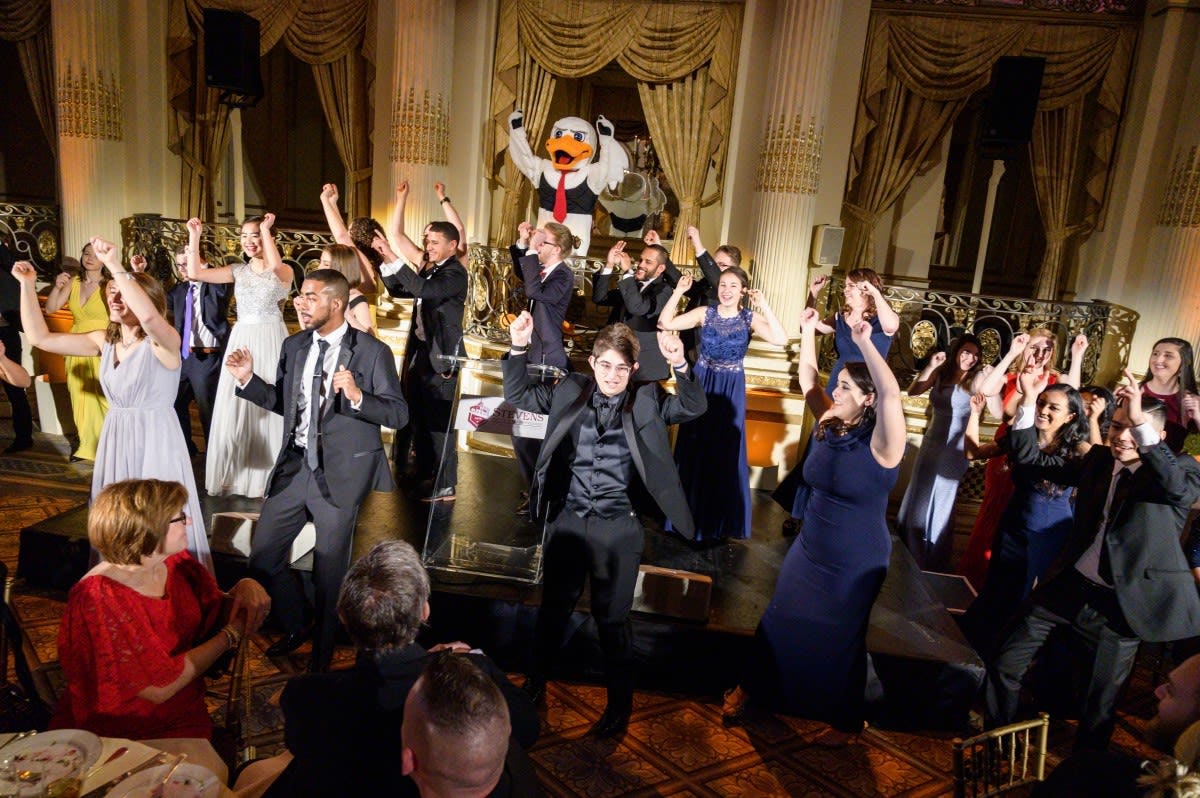 Students perform the “Duck Dance” with Attila to kick off the night. Photo credit: Jeff Vock

The festivities opened with a student performance of the “Duck Dance” and a surprise appearance by Attila, the Stevens mascot, which kept the lively and spirited mood going through the evening. A rocking rendition of Queen’s “Don’t Stop Me Now” by the President’s Ensemble and an empowering cover of Sara Bareilles’ “Brave” by chemical engineering major Monica Traupmann, Class of 2020 (who is also sending a rocket into space), with accompaniment by Max Cool Class of 2020, had the crowd clapping along and dancing in their seats.  Master of ceremonies Chris Cimino, News 4 “Today in New York” meteorologist, received his own special recognition when Stevens President Nariman Farvardin presented him with the Stevens Presidential Pin to thank him for his service over the past four years. The honor was a surprise to Cimino that Farvardin joked he was happy to bestow, so long as Cimino wore his Stevens pin “from time to time, especially on air.” (Cimino did so the very next broadcast!)

That jovial vibe was felt throughout the night, with many recipients using their acceptance speeches to have a little fun. Metcalfe, leader of the clinical research and strategy teams for Blue Cross Blue Shield across five states, thanked the selection committee, joking that their checks were in the mail, while Cheng, executive vice president of Global Operations and Information Technology with AstraZeneca, thanked the audience for clapping louder for her boss — AstraZeneca CEO Pascal Soriot, who came in from London and offered remarks about Cheng after she received her award — than for her. 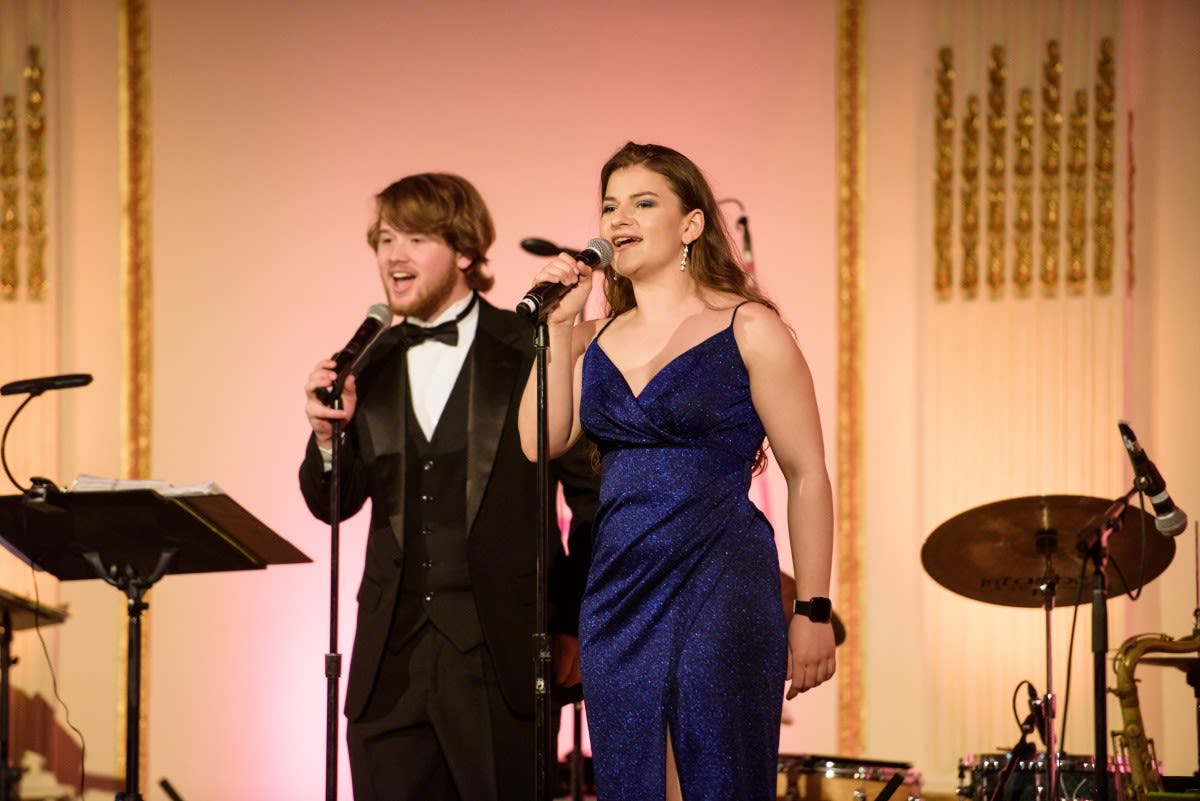 Monica Traupmann and Max Cool, both members of the Class of 2020, perform an empowering cover of Sara Bareilles’ “Brave.” Photo credit: Jeff Vock

But the most prevailing sentiment of the evening was that of gratitude, to Stevens and to family.

Ruesterholz, the first female chair of the Stevens Board of Trustees and a retired Verizon executive, thanked the university for two gifts she received upon graduation: her husband, Kevin Reusterholz ’83, and her degree, which she referred to as her “master key” because of all the doors it’s opened for her.

Crowley, a 25-year trustee and former longtime corporate counsel with Johnson & Johnson who is currently operating his own law firm advising startups and emerging companies in the life sciences and other technology areas, thanked Stevens for helping him heal an “emotional hole” left by the death of his father three months before he first started at Stevens. This Stevens benefactor and past Stevens Alumni Association president credits the inheritance of “42 brothers” through his beloved fraternity, Sigma Nu, and Stevens’ faculty and alumni with helping him attain his success. “I want to make that experience available to others,” he said. “[I hope] this award incentivizes others to help Stevens provide these opportunities to others.”

Fiocco, a retired senior engineering associate with ExxonMobil Research & Engineering who holds 20 patents, recalled his extended study at Stevens, when he decided to earn a newly offered degree. “[Chemical engineering] fit me just right so I stayed on for a few more years,” he joked. The past SAA president thanked his family and friends and his classmates, including Harries, with whom he attended kindergarten at PS 15 in Jersey City, New Jersey.

There were also examples of appreciation expressed to the awardees. Cimino read portions of emails sent to the selection committee from alumni who had Magee as a professor, praising him for the effect he had on their lives. The moment wasn’t lost on Magee, a former Stevens trustee, past SAA president and longtime alumni leader who taught mechanical engineering for several decades at Castle Point. “I have been blessed and am extremely grateful to Stevens … I owe Stevens so much,” he said.

Harries, who was Stevens’ resident engineer in the early 1960s and managed the construction of the Howe Center, recently helped change the Hoboken skyline again with a record-breaking bequest that will help fund the largest building project in Stevens’ history, the Student Housing and University Center. Despite having had a profound effect on the entire Stevens community — past, present and for years to come  — Harries, who founded his own development firm and completed more than 900 projects over his long career, said he accepted his award with humility and respect. “Thank you, Stevens, for showing me the way to a proven path for my life.”

Mascolo, a Stevens trustee and leader of IBM’s U.S. Public Service business unit, praised Stevens for its greater impact. “Stevens is a university that raises the aspirations and expectations of its graduates to do more and be more…to make our communities a better place.”

Not a graduate but making the Stevens community a better place is Fernandez, a Stevens trustee who envisioned and supports [email protected], a program to spot instinctive future engineers in high school who have potential for innovation and leadership. He told the story of sneaking a peek into a dinner party at The Plaza when he was just a boy, and his father’s advice to him afterwards. “If you apply yourself in school and work very, very hard, someone one day may invite to you a dinner party like this,” he said. He was greeted with thunderous applause from the audience  because that evening, he was not only dining at The Plaza but was also being recognized for paving the way for others. Fernandez also proudly introduced a group of friends who flew in from overseas for his special night.

Fernandez, who is vice chairman of Wabtec, a global supplier of technology for the railroad industry, was not the only honoree to see guests travel from far places. While Cheng’s current boss flew in from England, she also welcomed a surprise visitor, her former boss Willie Deese, retired executive vice president and president, Merck Manufacturing Division, who came from North Carolina. The top secret visit was arranged by her former Merck colleague and past Awards Gala honoree Moushmi Culver ’00.

Cheng glowed with excitement and gratitude for the honor, and shared her story with fresh candor. She remembers that when she told her father during her senior year in high school that she wanted to be a chemical engineer, he replied that “girls cannot make it in engineering,” she says. So, she pursued engineering.

“And not just engineering, but CHEMICAL ENGINEERING. To all of the girls out there — you’ve got this!” she said, to the most jubilant applause of the night.

Stevens President Nariman Farvardin later told the audience that Stevens’ star is on the rise, and he then saluted the brightest stars of the evening: the honorees.

“The contributions and achievements of the honorees across a diverse range of domains and industries bring acclaim and distinction to Stevens, and we are so proud of them!”

Guests also offered effusive praise of the honorees and the evening.

Reeba James ’17 was particularly taken with the women honorees.

“Hearing what our female award winners had to say about their experience at Stevens and after Stevens — it was empowering.”

James specifically praised Magee, a mentor who inspired her to come to Stevens; Metcalfe, who was recognized withThe Hidden Figures of Dallas: Top Women of Color in STEM award (“Come on — that’s amazing!”); and her fellow alumni, including those now aspiring to also make a difference in the world.

“You root for everyone here,” she said. “I know that I went to school with such wonderful people. I know that someday some of them will be up there. ”

Jennifer McDonough, Stevens’ vice president for development and alumni engagement who joined the university earlier this year, left inspired — by this honoree class and the evening.

“This being my very first Stevens Awards Gala, I can say with all sincerity that the evening was a powerful and glorious testament to a truly extraordinary university,” she said. “The breadth and depth of the many accomplishments represented by this year’s nine honorees were both humbling and inspirational.

“Individually and collectively, these individuals personify why Stevens is such a worthy recipient of affection, affinity and philanthropic investment.”

Students like Allen Best ’21 marveled that Cheng’s boss would travel across the Atlantic for this evening.

“Having a boss fly over to honor her speaks a thousand words to me,” he says.

“As a student, it motivates you to want to be one of these honorees in the future.”

Awards Committee Chair and Stevens trustee John Dearborn ’79 M.Eng. ’81 praised the hard-working awards committee and also gave a special thank you to the many friends of Stevens, including a number of representatives from prestigious corporations and sponsors, many of whom were attending their first Gala.

“We hope you feel the energy and spirit and will help us spread the word to grow the prestige and reputation of this amazing institution,” he said.

As the Gala ceremonies wound down, with the promise of a lively after-party and dancing, Dearborn smiled brightly and offered a final thought.

“For a bunch of really smart people, we throw a pretty good party, right?”

To read more about the honorees, please visit the 2019 Stevens Awards Gala page.