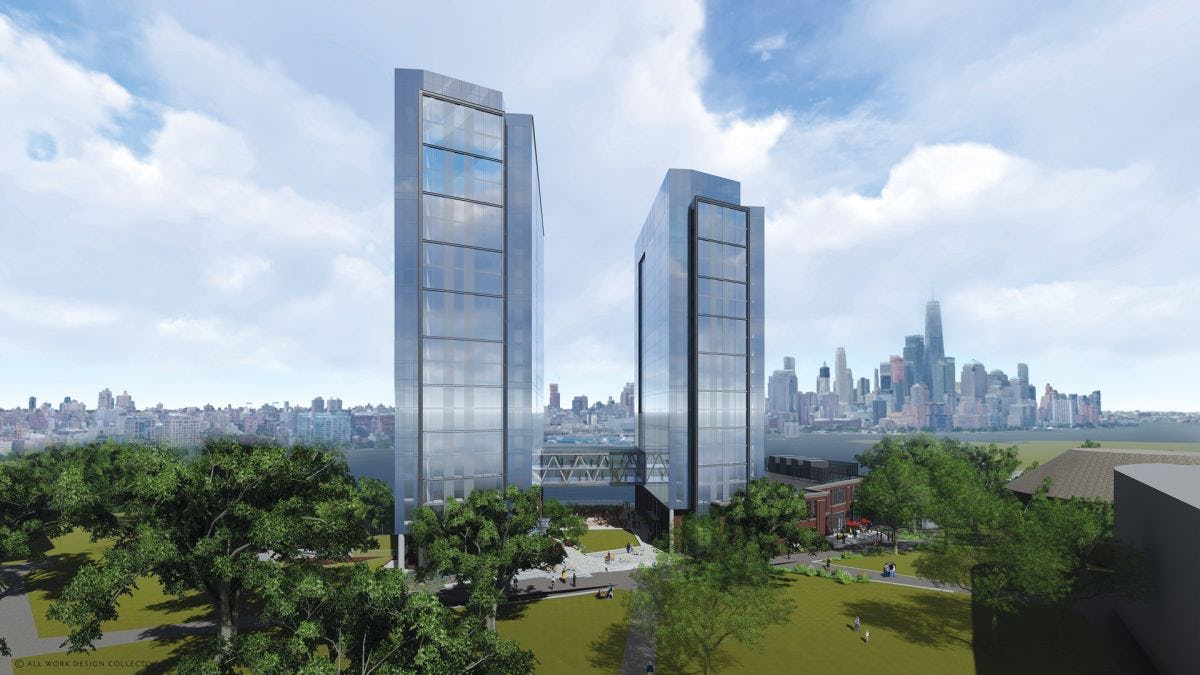 The Student Housing and University Center will be clearly visible from the West Side of Manhattan, and a defining landmark along the Hudson River. Artist's rendering courtesy of Design Collective

Stevens Institute of Technology will soon embark on the most ambitious infrastructure project in its history when it begins the initial phase of construction of the Student Housing and University Center project on its hilltop campus overlooking the Hudson River.

To be completed during the 2021-22 academic year, an extensive three-story university center building with two residential towers rising above will be built near the highest point of Hoboken, addressing the university’s critical need for campus housing for its growing student population of nearly 3,500 undergraduate students.

The new building complex will give Stevens a true university center – the focal point on campus – that can accommodate various types of gatherings, facilitate social and recreational activities, provide additional dining and retail services, host lectures and talks, and much more.

The addition of new on-campus housing will also contribute to a greater sense of campus unity. The two residential towers will provide a unique living and learning environment for nearly 1,000 students, and relocate hundreds of students who live in university-leased housing throughout the “Mile-Square City” of Hoboken.

When completed, the Student Housing and University Center will help deliver on a strategic priority to create a vibrant campus – a key pillar of Stevens’ 10-year strategic plan and its historic Power of Stevens capital campaign – to help Stevens grow in size and prestige.

“Premier universities are defined primarily in three ways: stellar students, exceptional faculty and first-rate facilities,” said Stevens President Nariman Farvardin. “This project will be an iconic addition to the aggressive expansion, modernization and revitalization of our entire campus infrastructure that has been underway over the last few years.”

A modern university center and additional housing for students 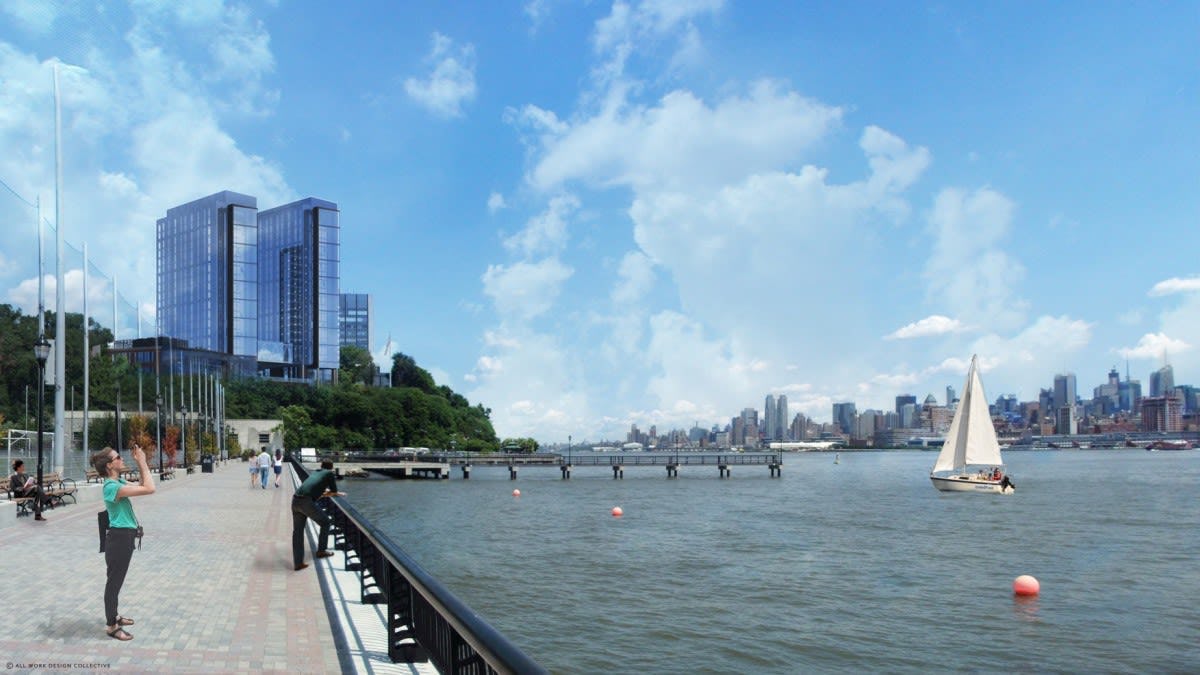 A rendering of the Student Housing and University Center from Hoboken's waterfront promenade. Courtesy of Design Collective

The two residential towers – one 16 stories and the other 18 stories rising above the three-story university center – will accommodate 994 students in single, double and suite-style apartments. The amenities will include kitchenettes in each unit, private in-suite bathrooms, a refuse/recycling room on each level and a shared study lounge on the residential floors. The Student Housing and University Center project will incorporate Stevens’ emphasis on sustainable design and construction, and is intended to be a LEED-Silver project.

But the building’s lasting imprint on the Stevens campus will extend far beyond its physical size.

The Student Housing and University Center project will shape campus culture for future generations of students, according to Marybeth Murphy, vice president for enrollment management and student affairs.

“With this building, Stevens will be able to offer students an unparalleled campus experience, one that will encourage students to have greater engagement with the Stevens community than they already do now because the physical proximity will enable them to participate in more campus activities, take on leadership roles, develop relationships with students, faculty and staff, and have university resources and services readily available to them.”

The return of so many students to on-campus living options and the addition of a hub for university life will allow for an even stronger sense of community at Stevens, says Sara Klein, assistant vice president for student affairs.

“Our students prefer living and spending their time on campus; the proximity allows for greater connections to each other and to Stevens, more interaction with faculty and administrators, and significantly more engagement in the campus community,” Klein said.

Design that honors the past while looking toward the future

To be built on the current site of Jacobus and Hayden halls and adjacent to the Wesley J. Howe Center, the buildings will be adjacent to Wittpenn Walk, the pedestrian path that connects the upper and lower areas of the campus. By designing the two residential towers perpendicular to Wittpenn Walk, the design team has created a dramatic change by opening the views to the Hudson River and beyond from campus. This will include a large outdoor plaza that will fully showcase Stevens’ signature views of New York City. 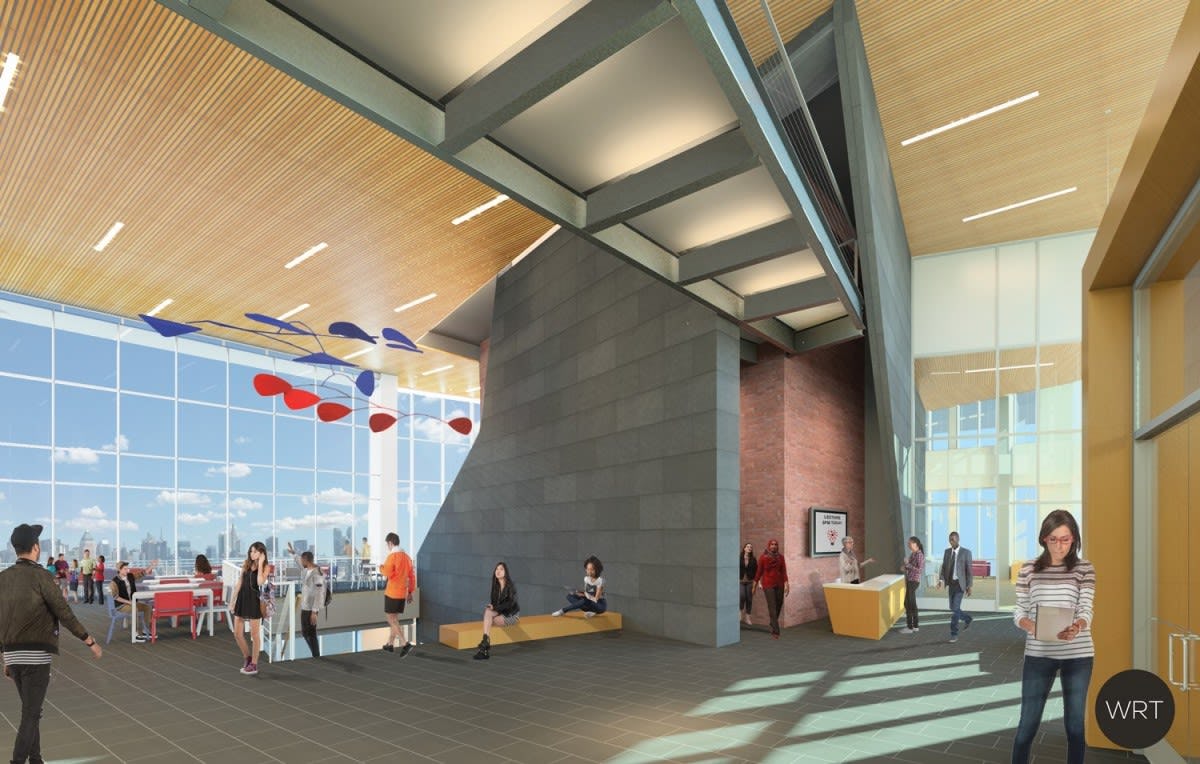 An expansive lobby, featuring wall-to-wall, floor-to-ceiling windows that look out onto the Hudson River and New York City, serves as a central point of introduction for visitors and a communal hub for the Stevens community. Courtesy of Wallace Roberts and Todd (WRT)

In addition to framing the remarkable views, the design team – Design Collective and Wallace Roberts and Todd – has been mindful of respecting the scale of the nearly 150-year-old hilltop campus, said Richard Snyder, a senior project manager with the Division of Facilities and Campus Operations at Stevens.

The solid mass of the university center, which serves as the base of the building, will align in height and red brick exterior with adjacent buildings along Wittpenn Walk, including Walker Gym, Davis Hall and Schaefer Athletic Center. Snyder added that the use of glass to clad the two residential towers is intended to make the towers reflect the sky and appear lightweight.

The first stage of the project will involve abatement, demolition and excavation of the existing site, starting with the demolition of Jacobus Hall, followed by Hayden Hall. Student club and activity spaces, formerly housed in Jacobus, are in temporary space until they can be relocated to the newly-renovated Alexander House in summer 2019.

Building a modern university center with two residential towers would not have been possible without approval from the City of Hoboken. In August 2018 and with the support of the Mayor, the Hoboken City Council approved an ordinance creating a new University District zone which enables the construction of two residential towers atop a three-story university center.  Many members of the Stevens community contributed to this watershed achievement by expressing their support to Hoboken’s elected officials. 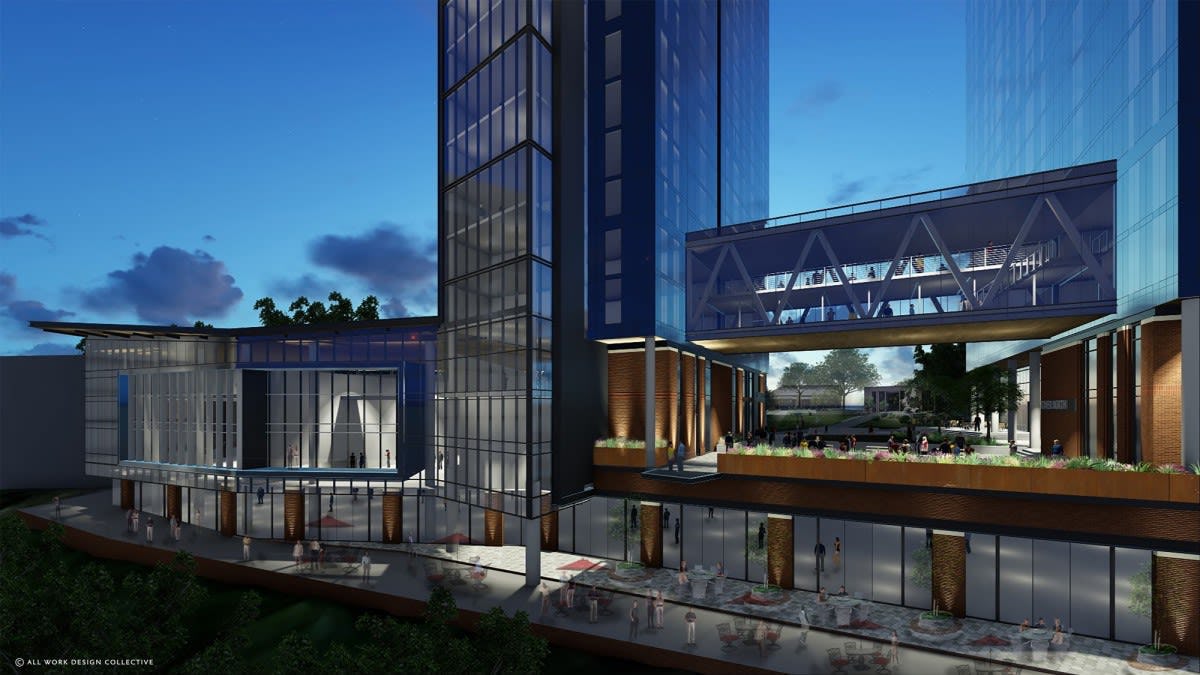 A nighttime view of the Student Housing and University Center. A two-story glass bridge with study and lounge space, as well as a recreation area with billiards and ping pong, will connect the two residential towers. Courtesy of Design Collective

Additionally, the Student Housing and University Center project was made possible in part through The Power of Stevens, the university’s capital campaign project to support student success, faculty excellence and development of a vibrant campus. A historic gift – the largest single bequest in Stevens’ history – by alumnus Richard Harries ’58 and his wife Carol, announced last year, will help support the new residence halls. The north residence building will be named the “Richard F. Harries Tower” in honor of Mr. Harries’ generosity.

President Farvardin, who joined Stevens in 2011 as its seventh president, has led the greatest period of transformation in the nearly 150-year history of Stevens in a broad campaign to modernize the university’s infrastructure into a 21st century campus for teaching, research, learning and living.

During the past five years, the Stevens campus has added a host of new facilities, including the ABS Engineering Center, the Hanlon Financial Systems Center, the North Building, the Ruesterholz Admissions Center, the expansion of Babbio Garage, the new Student Wellness Center, and opening later this year, the Gianforte Family Academic Center, a four-story, 89,000 square-foot pair of buildings that will feature 11 smart classrooms, 13 teaching and research labs, and 45 faculty offices, plus various spaces for students and professors alike to congregate and collaborate.