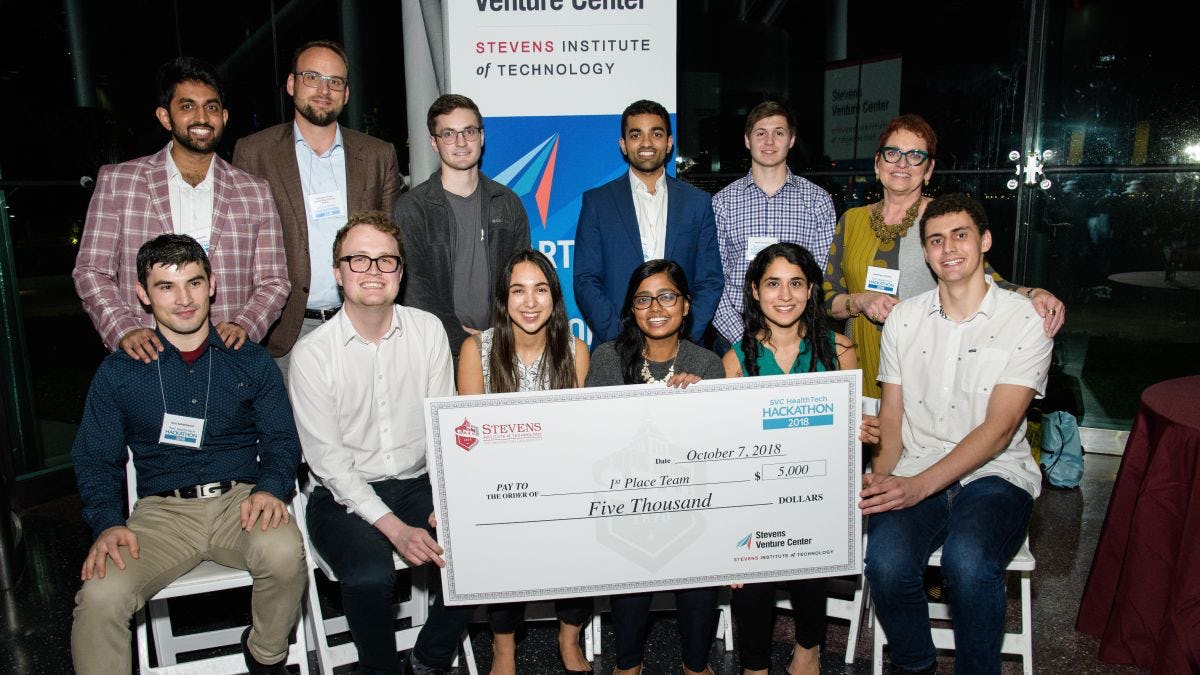 A depression-management tool created by a team that included four Stevens students took first prize at the Stevens Venture Center’s recent HealthTech Hackathon, a multi-day event that brought young innovators together with healthcare, technology and business professionals to develop new approaches to pressing issues in health and medicine.

The group said it was inspired by the epidemic of depression and suicide among college students.

Stevens’ HealthTech Hackathon is attracting increasing interest from professionals in healthcare technology, the organizers said. Twenty-five mentors signed on to work with the participants and volunteer judges came from such healthcare and technology heavyweights as Bristol-Myers Squibb, Bell Labs, Quest Diagnostics and others.

Adrienne Choma, the associate director of the SVC, said that some of the teams made strong impressions on the judges and on the industry mentors who participated in the hackathon. As a result, some of them may soon get opportunities to continue their work.

“There are some really good, commercially viable business ideas that some of the winners are excited about pursuing,” she said. Choma added that the non-profit New Jersey Health Foundation, a sponsor of the hackathon, will give the top teams an opportunity to pitch their ideas and obtain grants of up to $35,000.

“This event is positioning Stevens as a game-changer in the digital healthcare space, and it only keeps growing and expanding,” said Premal Kamdar ’13 Bioengineering, a co-founder with his brother, Vishal, of last year’s inaugural hackathon and a driver behind this year’s sequel. “We hope this is the genesis of a rich community of entrepreneurs and startups solving healthcare’s largest unmet needs.”

In all, 43 “hackers” participated. They were selected from an applicant pool consisting of 125 high school, college and graduate students plus healthcare and technology professionals. Participants formed ten teams, which took on one of two challenges:

Besides a chance to earn prize money, participants received invaluable exposure to experts and professionals who could help them build on their ideas and create viable businesses.

Participants brainstormed ideas and developed prototype apps. They also attended discussions and workshops intended to help them hone their ideas and presentations. The hackathon culminated in a pitch competition, with $10,000 in total prizes awarded to the top three teams after two hours of intense questions from a panel of industry leaders who served as judges.

In addition to Hippo, the other prize-winners included Team Codenza, which earned $3,000 for a program for the early diagnosis of skin cancer; and Team ANX Solutions, which won $2,000 for a wearable device that detects anxiety and alerts wearers’ support network and clinicians.

The event also included a keynote speech by Sandra Powell-Elliott, vice president for life sciences and innovation at Hackensack Meridian Health, and a kickoff address by Justin Williams ’15, the founder and CEO of Noteworth. Robyn Ashmen of the Stevens School of Business served as emcee.

Choma and Premal Kamdar, a healthcare entrepreneur, were part of a team of organizers that included Premal’s brother Vishal, an investment banker; Mark Freeman ’20; and Justin Trugman ’20.