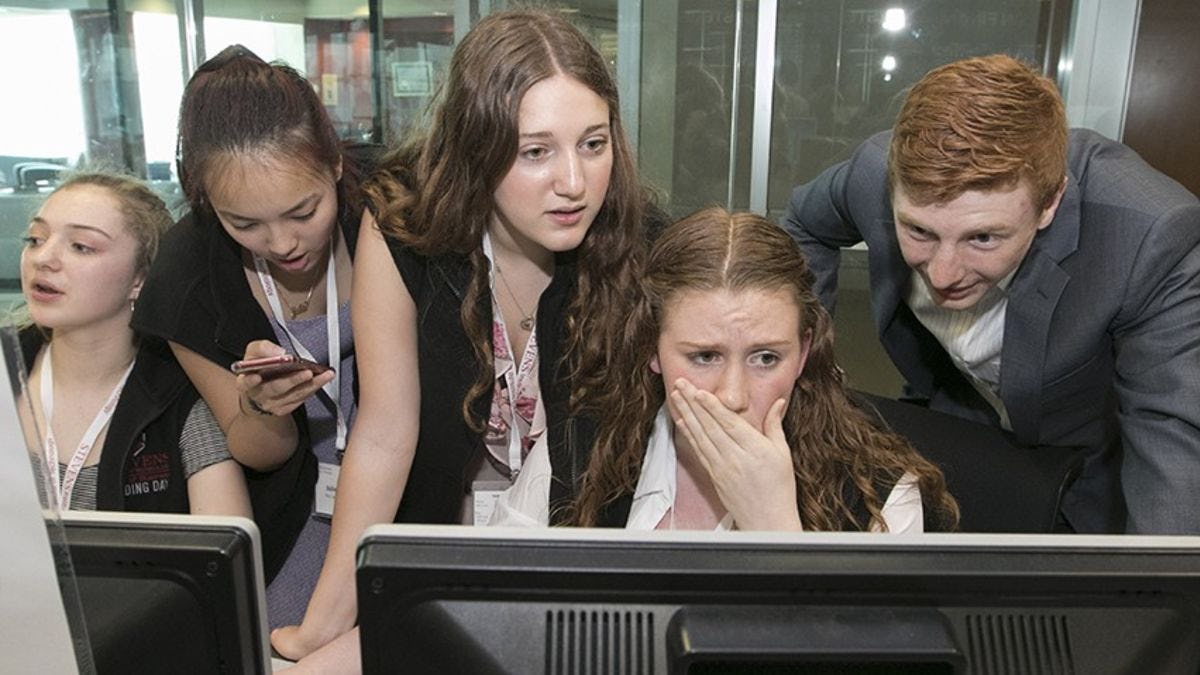 Students from Our Lady of Mercy Academy, with Stevens student ambassador Charles Manzari, right, react as their portfolio loses value. The team held on to finish second overall in Trading Day 2017.

U.S. stocks may have had a rough run of things on April 28, but for the high school students participating in Trading Day 2017 at Stevens Institute of Technology, the market’s performance only added to the day’s excitement.

Students from 22 high schools in New Jersey, New York and Connecticut used the high-tech finance labs housed within the School of Business to grow virtual portfolios of $1 million during a real-time trading competition. Students used live data from Bloomberg and CNBC to make trades and react to fast-changing market conditions through software provided by TD Ameritrade, which sponsored the event.

On a day when only four teams managed to turn a profit, it was Bergen County Technical High School, in Teterboro, that finished atop the heap. But advisor Norina Sfeir said her team kept her in the dark when it came to preparation.

“They’re so brilliant and strong-minded that they wanted to show me they could win this without my help — because before I became a teacher, I was a trader for 20 years,” she said. “They kept it hidden from me.”

So while their winning strategy remains a secret, each member of the Bergen Tech team has been studying strategic asset management since their freshman year, “where they learn about the kinds of things the stock market responds to, and they learn a basic set of technical tools that allows them to do some of the things students do at Stevens,” Sfeir said. 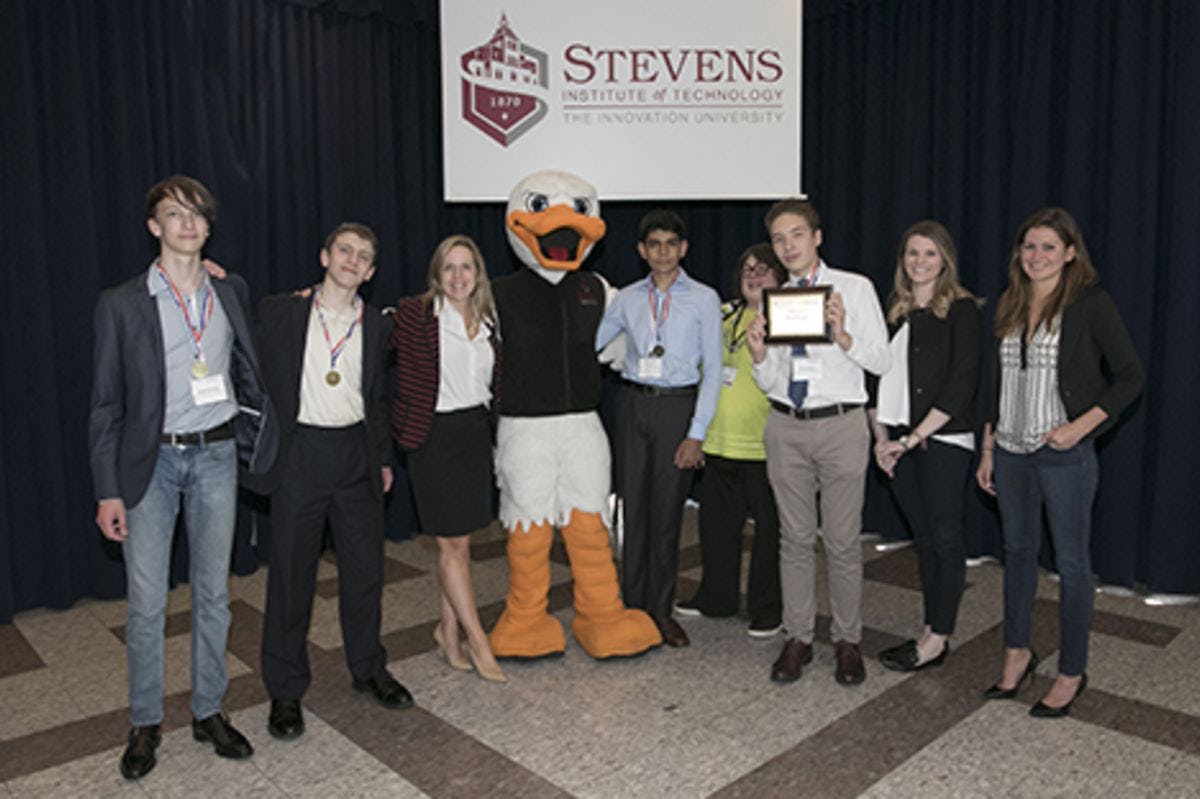 Trading Day is a chance to introduce high school students to the seismic shift technology has created in finance. For years, finance was a relationship-based business, but has increasingly become the domain of professionals able to make smarter, faster decisions based on data. And success in the field requires investors to apply quantitative methods and be able to visualize huge sets of data in real time — key skills that make School of Business graduates so attractive to recruiters.

Bergen Tech students, who trade through Robinhood on their phones as a hobby, said the Trading Day experience gave them additional comfort with technology in finance.

“I trade on my own already, but I think being able to trade in a room surrounded by other traders was really cool, and a great chance to put your skills to work, instead of just randomly choosing stocks,” said student David Shakirov.

This is actually how finance operates, and seeing that in a hands-on way is very valuable for our students.
Arthur Cohen, staples high school advisor

Our Lady of Mercy Academy, in Newfield, was an early leader that watched its fortunes tumble late in the day, finishing in second place; the team's advisor, Jennifer Bifulco, said the girls on the team divided responsibilities ahead of time so each student would know her role during the competition. Weehawken High School was the runner up, while students from Staples High School, in Westport, Conn., were judged the most spirited.

Arthur Cohen, the Staples advisor, said the experience was great for his team of students.

“They’re having fun, experimenting with some longs and shorts, and just getting an idea of what it’s like to make a mistake — whether to cut your losses or ride it out,” Cohen said. “The business school at Stevens is very real-world oriented, and this lab is a real-world setting — thankfully, since they’ve lost money, it’s not real-world money — but this is actually how finance operates, and seeing that in a hands-on way is very valuable for our students.”

Other advisors also were impressed with the technology capabilities available to Stevens students. The Hanlon Financial Systems Lab has an impressive array of hardware and software capabilities, including Bloomberg terminals, that allow for intensive data analysis; the Hanlon Laboratory for Financial Analytics and Data Visualization, which opened in August 2016, includes additional data visualization capabilities. 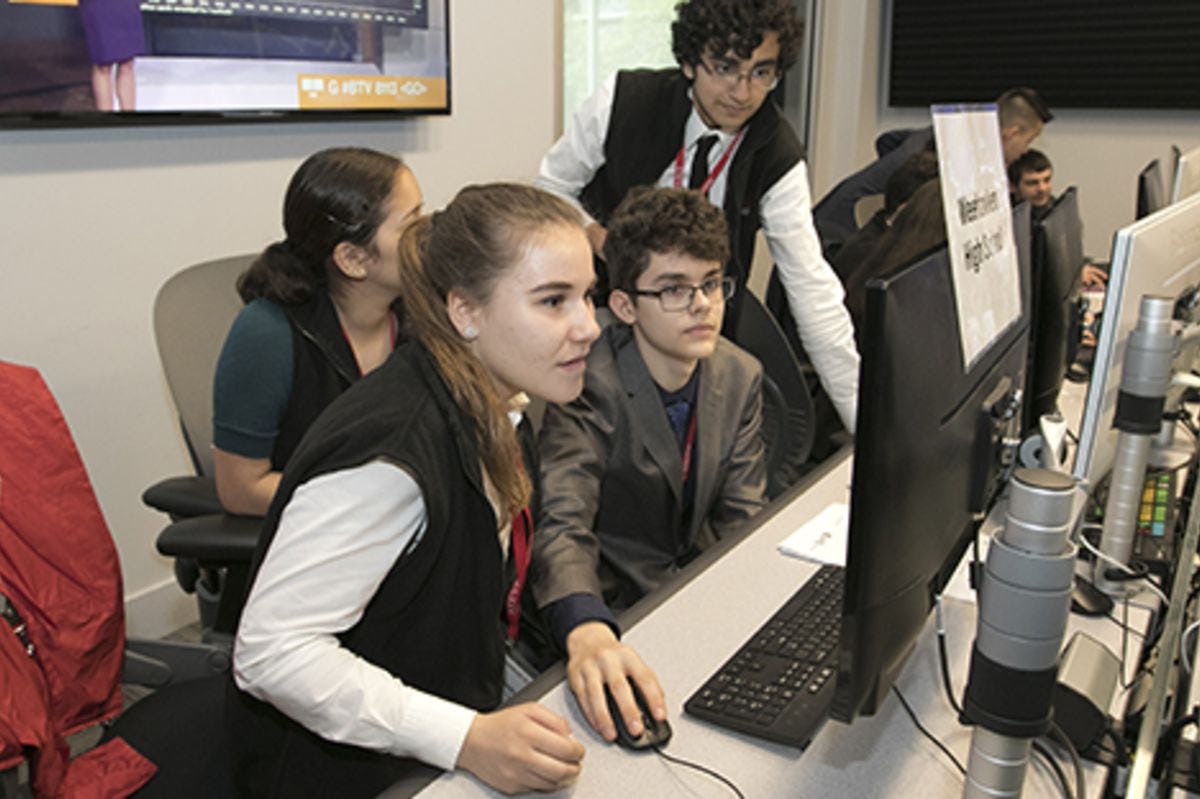 Weehawken High School students react as the market stutters during Trading Day. The team took third place in the competition.

“I like that the students have the opportunity to do real-life trading, to get a real sense of what it’s like to trade with a lot of other investors in the same spot,” said Stefan Busheski, the advisor for Archbishop Stepinac High School, in New York.

Busheski, who moderates a business and finance club at Archbishop, encouraged students to track the stocks in advance and research how successful traders approach the market — a strategy other schools tried to exploit, also.

Douglas J. Klein, the advisor for Dr. Ronald McNair Academic High School, in Jersey City, made sure his students were comfortable using TD Ameritrade’s Thinkorswim platform, in addition to research on how the markets work.

“I taught them some chart reading, so they would understand basic concepts, and then we looked at the histories of a couple of very successful traders,” Klein said. “What I’ve been telling these students is that this is an unusual time, because the market is very, very bullish right now,” he said. “There’s a difference between academic theory of what you look at, in terms of the textbook valuation of a stock, and the way the market is actually buying. I’m very grateful that Stevens offers our students the opportunity to see that firsthand.”

Students also get the opportunity to meet with industry professionals from various companies, including Deloitte, Dow Jones, Bloomberg, IEX and TD Ameritrade — each of which employs Stevens graduates.

“TD Ameritrade is committed to educating and empowering tomorrow’s investor,” said Nicole Sherrod, managing director of trading at TD Ameritrade. “Trading Day exposes the next generation of traders and investors to the many variables involved with trading, and helps them understand how integral technology is to investing and the markets.”