Fair Trade: At IEX, Schwall Brings a Culture of Justice to Wall Street 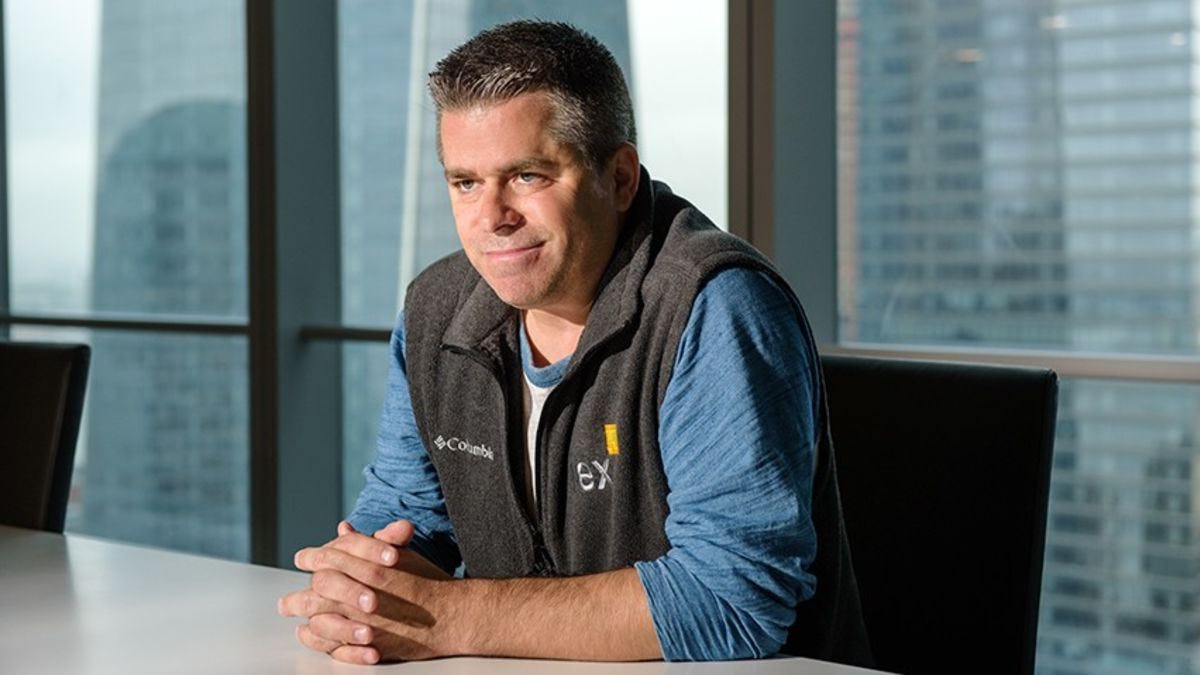 John Schwall in IEX's World Trade Center headquarters. 'We wanted to build an exchange that was faster than its fastest participants,' Schwall says of the exchange he co-founded.

Stevens Alumnus Co-Founded an Exchange that Seeks Fairness through Technology

If you ask IEX employees how they came to work for a group of scrappy entrepreneurs set on reshaping Wall Street, they’ll tell you it was scary to leave behind jobs at the dominant financial houses — but that the idea of staying was just as unpleasant, as they saw firsthand the design of new systems that could unfairly exploit average investors.

In other words, they started seeing the world the way John Schwall ’95 M.S. ’98 sees it.

In a story about bringing justice and fairness to Wall Street, Schwall is the kind of guy you’d expect to play the role of protagonist. In fact, he plays a key role in the Michael Lewis book Flash Boys. The men of Schwall’s family have a long history as firefighters — Schwall enrolled at Stevens at the advice of an uncle, also a New York City fireman — and while he doesn’t rescue people from burning buildings, his work at IEX has him protecting the pensions and retirement plans of people around the country. 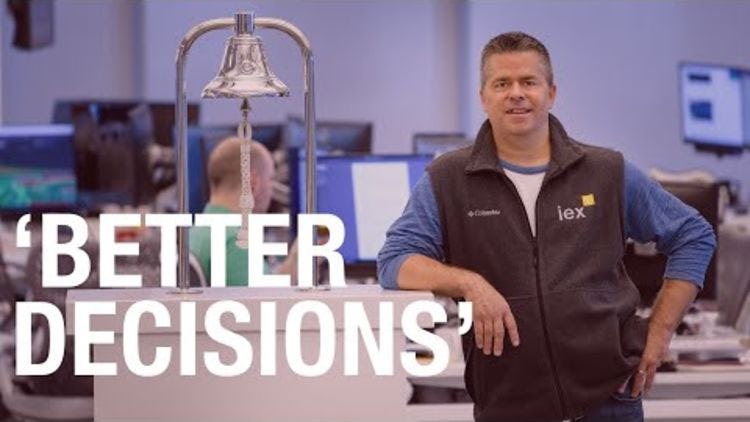 Flash Boys explores the rise of IEX from a small group of highly talented managers who saw how certain trading venues and high-frequency trading — or HFT — market participants were exploiting loopholes in regulation and market design to create and profit from unfair advantages, largely because regulators failed to anticipate how transformative technology’s impact would be on traditional investors.

A technology company at heart

Some people who hear this story may assume IEX and Schwall, a co-founder and its chief operating officer, are Luddites intent on eliminating HFT, which couldn’t be further from the truth. IEX, he said, is a technology company first, with more than half its employees working in engineering, math and computer science. 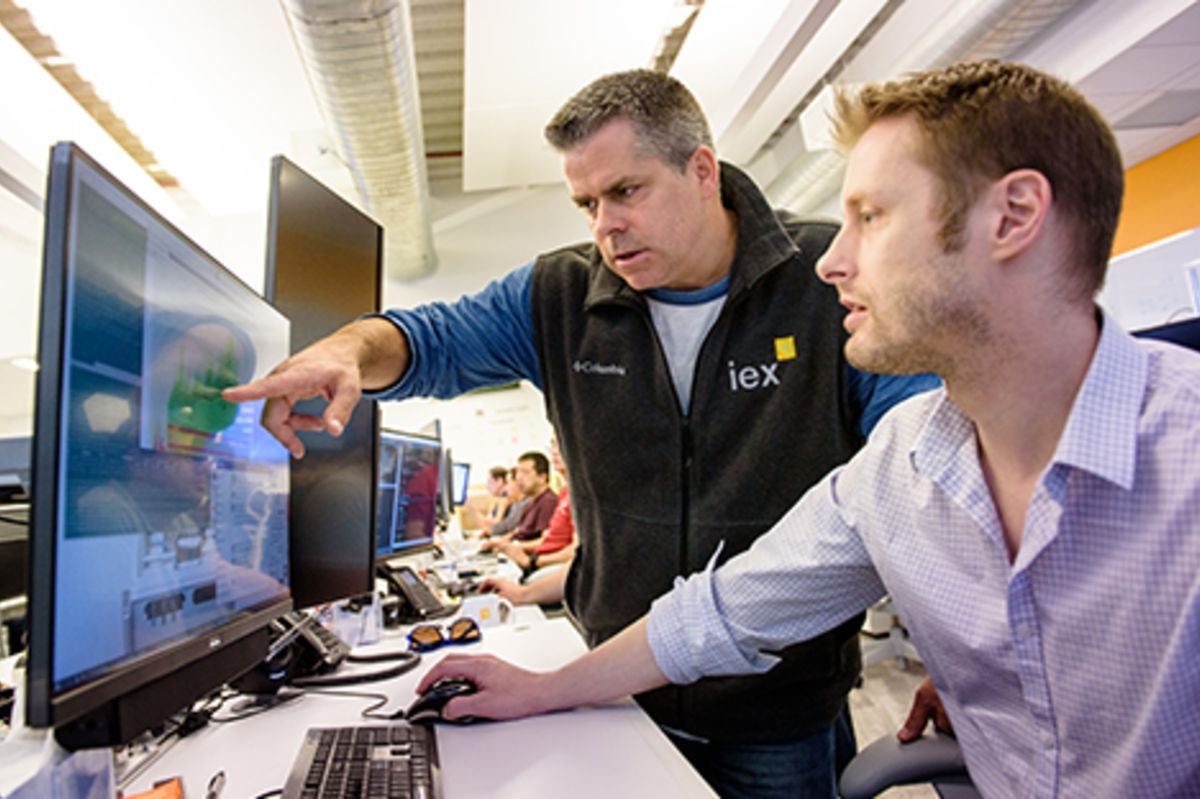 Daniel Kopko '04, seated, a core developer at IEX, answers a question from John Schwall '95 M.S. '98 about some financial data they're examining in IEX's New York headquarters.

“Creating a market that reduces structural inefficiencies and compensates for other parts of market design creates a unique set of complex engineering problems,” he said.

“The problem isn’t high-frequency trading, it’s exchanges who knowingly fragment the market, create structural inefficiencies with their technology, then sell expensive low-latency technology for market participants to take advantage of those structural inefficiencies,” Schwall said. “Technology will continue to evolve, and people will continue to leverage technology to establish an advantage. And that’s great, that’s capitalism. But it’s also capitalism to try to come up with a solution to solve the problem of certain people taking advantage of regulatory and technology loopholes to profit when trading against traditional investors.”

Flash Boys offers an excellent primer on the problem. The very short version: A regulatory loophole allowed certain market participants to use technology to anticipate orders and make money by executing trades microseconds ahead of other investors, like pension funds. In about one-one thousandth the time it takes you to blink your eye, you’d lose money to an algorithm.

IEX’s solution is its “speed bump” — a coil of fiber-optic cable that slows access to its market by 350 microseconds. That coil protects orders on IEX from being exploited by traders who have purchased faster access to information from rival exchanges, and prevents traders on IEX from reacting and racing ahead of orders being routed to other exchanges.

“When you get past the controversy surrounding Flash Boys and the IEX exchange application, it all comes down to something very simple,” Schwall said. “We wanted to build an exchange that was faster than its fastest participants.”

Other exchanges — many of which sought to block IEX’s exchange application, arguing the speed bump was itself an unfair advantage — are now seeking approval for variations of the speed bump on their own subsidiaries. And while imitation is the sincerest form of flattery, at IEX, innovation isn’t just slowing down; to Schwall, the company’s greatest innovation is fairness. Unlike other exchanges, IEX doesn’t pay rebates, doesn’t sell faster access and doesn’t sell market data — points that the company’s founders emphasized in their quest for startup capital.

So much of what you do in markets today has to do with finance, technology and big data sets. Stevens almost always comes up as a school that we're going to try to target for potential talent.
John Schwall '95 M.S. '98, Co-Founder, IEX

“We were trying to build a company that would last more than a generation — and HFT may not even be an acronym three years from now,” Schwall said. “But there will always be this level of unnecessary intermediation because rules will change, market structure will change, technology will change — and new market participants will emerge to exploit another structural inefficiency. And so we’re going to continue to evolve and continue to innovate to protect investors from unnecessary intermediation.”

This new breed of high-tech intermediation that gave IEX its start was created through a rule called Regulation NMS, but it’s just a modern version of an old problem. In Flash Boys, Lewis details how Schwall skipped a few days at work to go to a library and research the history of market corruption and front-running dating back to the 1800s.

Recalling the episode in IEX’s offices in the World Trade Center, Schwall said his trip down that rabbit hole was more than just an obsession.

“I wanted to prove to myself that this problem existed throughout history, as long as there have been capital markets,” he said. “It convinced me that we had to find a way to bring brokers and investors directly together on a common platform without providing select participants with informational or speed advantages.”

Schwall’s experience includes roles at Pershing, Bank of America and Royal Bank of Canada, where he worked across teams in finance, operations, compliance and technology management; he credits Stevens with “giving me such a broad education with core analytical problem-solving types of skills.” As a student, he was a high performer who was president of Sigma Phi Epsilon fraternity and also the Gear & Triangle and Khoda honor societies; today, he has two Stevens alumni on the payroll, and given the unique skills taught at the School of Business, he expects to add more. 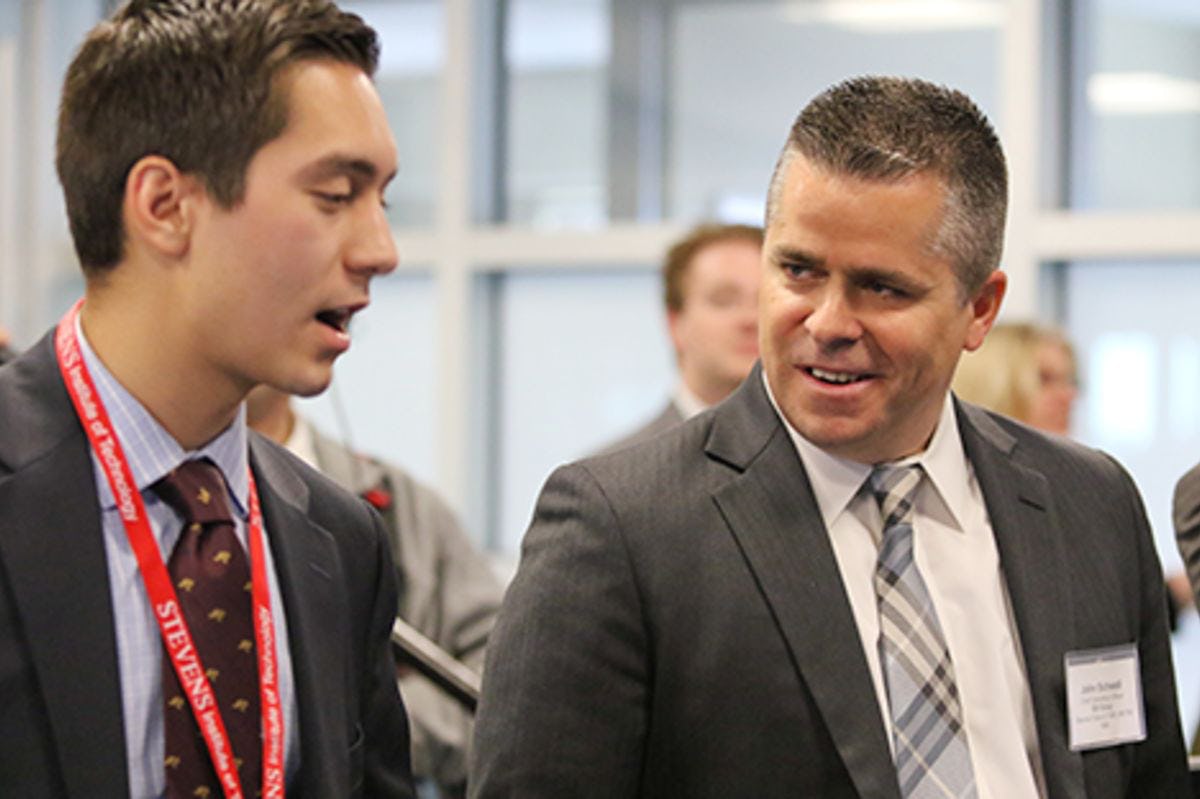 John Schwall speaking with a Stevens student at the Trading Day competition in the Hanlon Lab. 'Stevens almost always comes up as a school' to recruit from, he said.

“There is a core set of skills that we’re looking for — someone that has an understanding of finance, of technology, and who has worked with large data sets,” he said. “The students with backgrounds in quantitative finance understand this perfectly, because so much of what you do in markets today has to do with finance, technology and big data sets. Stevens almost always comes up as a school that we’re going to try to target for potential talent.”

Schwall gets his thirst for fairness from his mother, who he said taught him the importance of doing the right thing, whether popular or not.

“Early in my career, there was an uncomfortable business decision we had to make, and I can remember my manager saying to me, ‘You should have confidence, because what you’re doing is the right thing for the organization.’ And so one of the things I’ve said to the IEX team is that what we have to do is what’s right for the company — and to do that, at IEX, we have to do what’s right for the investor.”

That attitude has become woven into the culture at IEX, which was born from the ashes of the financial crisis. Schwall’s ultimate goal is to become the most trusted brand in finance; in speaking to the team, he emphasizes how important trust is in avoiding legal gray areas in the industry.

“There is this element of social justice and reform that people are looking for, and in many ways, Wall Street is going to be a part of that, because people are crying out against the corruption and the injustices we see on a daily basis,” Schwall said. “After 20 years in this industry, and seeing certain things get taken advantage of, it’s a pleasure to come to work and try to close those loopholes through a technology-driven free-market solution.”