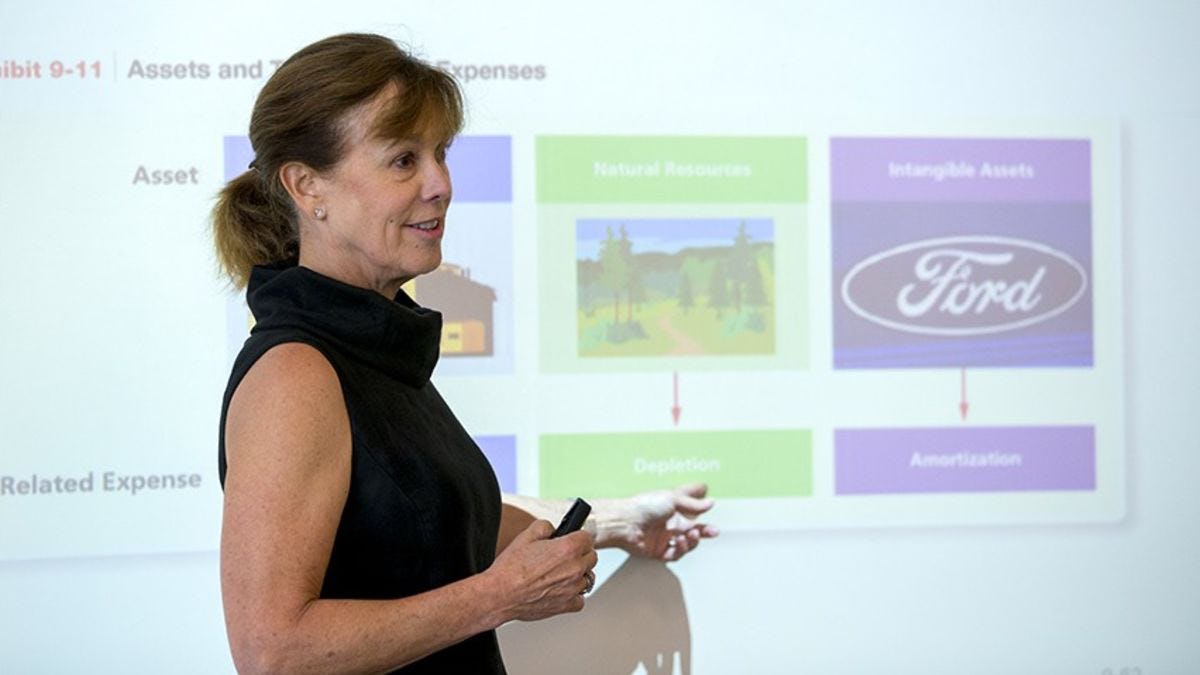 Dr. Elaine Henry teaching an accounting class at Stevens. Her research into financial reporting was recently published in the Review of Accounting Studies.

Not every accountant appreciates a good story. Perhaps that’s why relatively few of them do the kind of research that has made Dr. Elaine Henry such a valuable thought leader to the industry.

In fact, her path to becoming an associate professor of accounting at the School of Business at Stevens Institute of Technology started in an unlikely place — as an undergraduate student in the English department of Millsaps College, in Jackson, MS.

“I really think that is why I focus on financial reporting as communication,” said Dr. Henry, who earned bachelor’s degrees in both English literature and accounting at Millsaps. “Financial reporting is like a novel where there are two narrators, and both are telling you the story from their perspective. There are the numbers — the financial statements themselves — and then there’s the narrative provided by the company’s management, but they are both describing the same economic reality.”

In the case of financial reporting, that reality is also shaped by the two main sets of standards that govern financial statements: U.S. Generally Accepted Accounting Principles, used by American companies, and International Financial Reporting Standards, used by most of the rest of the world. Differences in those reporting standards can affect how the underlying economic reality is portrayed, as Dr. Henry examined in her recent paper on flexibility in cash-flow classifications under IFRS.

A tale of two standards

Dr. Henry’s paper — co-authored with Elizabeth Gordon, Bjorn Jorgensen and Cheryl Linthicum — was published in the Review of Accounting Studies in March 2017; it’s the latest in a long line of journal publications and book chapters spanning her distinguished career, which includes more than 20 years spent working in finance both in the U.S. and abroad for Lehman Brothers, McKinsey and Citibank. Her time in Taiwan, Greece and England has influenced her research, as well.

“I think that’s why one of the strands of my research focuses on international accounting,” said Dr. Henry, who is active in the leadership of the International Accounting section of the American Accounting Association. “Living overseas made me very interested in all aspects of international finance and accounting. But it all stems from an underlying curiosity about other countries and other cultures.”

Living overseas made me very interested in all aspects of international finance and accounting.
Dr. Elaine Henry, Associate Professor

She returned stateside in 2000; a year later, she decided to pursue her Ph.D. at Rutgers University and go into teaching — a career path that had begun more than two decades earlier while earning her MBA at Harvard University.

“The most rewarding experience I had during my MBA studies was tutoring a classmate in an advanced accounting class,” she said. “Accounting wasn’t my friend’s strong subject, but she ended up getting a top grade in the class. I found that more rewarding than any grade that I had made for myself.”

She taught at the University of Miami and Fordham University before arriving at Stevens, a school she said she admires for its strength in technology and the focus it places on its students. She was a driving force behind the creation of the Accounting & Analytics undergraduate major at the School of Business, and participated in the acceptance of Stevens finance programs into the CFA’s University Affiliation Program.

Connecting it to the classroom

Dr. Henry is in her fourth year teaching at Stevens, where she helps her students understand the financial reporting nuances she explores in her research by challenging them to read between the lines.

“In my financial statement analysis class, I explain to students that we should be aware of the different choices that companies have,” she said. For instance, one company she used as an example in her paper took their operating cash flow from negative to positive just by changing an accounting choice.

Therein lies the challenge, Dr. Henry said — deciphering whether companies make these choices in order to “tell their stories better” and describe their economic reality more clearly, or if they are simply trying to make themselves look better.

Like all stories, this one is open to interpretation, but “you can be a better analyst if you know that companies making this choice can change your conclusions or evaluations,” she said.