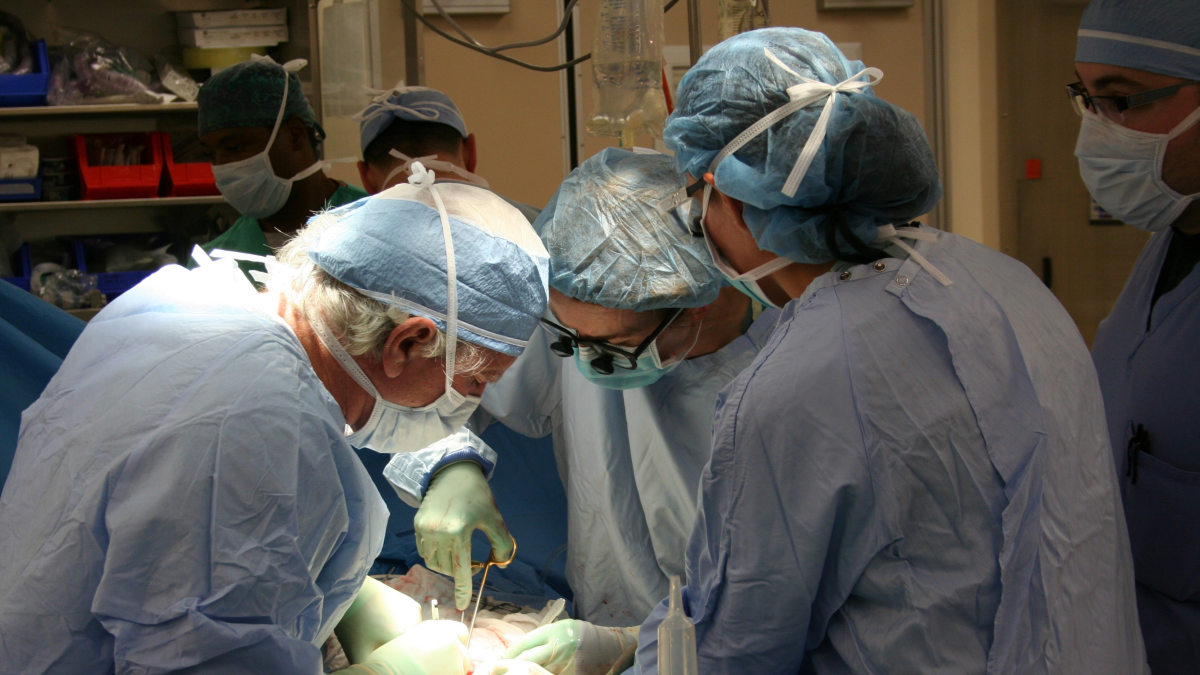 Stevens alumnus Joe Yaccarino ’88 reveals how, through his organization’s efforts, innovative solutions can help improve the lives of people with challenging surgical needs

As an elite runner ran a 100-kilometer ultra-marathon in the Australian outback, she became trapped by a freak firestorm, resulting in burns on 65% of her body.

A girl with Down's syndrome rounded the bases of a baseball field, and as she passed home plate toward the dugout, she fell because her knees popped out — an occurrence that became much more prevalent after she turned 9 years old.

A 66-year-old male with a history of deep vein thrombosis (DVT) was affected with left lower extremity complex wounds with full-thickness necrosis after an episode of cellulitis.

All three received bioengineered human tissues used for surgical procedures to treat burns, wounds, spinal fusion, and sports injuries, as well as applications for general orthopedic, plastic, and reconstructive procedures called allografts. The allografts were developed by MTF Biologics where Stevens alumnus Joe Yaccarino ’88, is the President and CEO. Yaccarino was the featured guest speaker at this year’s Dean’s Lecture Series at the Charles V. Schaefer, Jr. School of Engineering and Science.

Zu highlighted his 23 years of service at MTF Biologics marked by accomplishments including increasing in-house processing by 320%, leading engineering and development teams for more than 15 successful new product launches, and heading the expansion of new demineralized matrix tissue forms.

“Joe’s passion and dedication to innovation are truly inspiring. The advances made by MTF Biologics in human tissue bioengineering, a fundamental area of research in medicine, exemplify his leadership, scientific vision, and compassion for helping to improve the lives of people with challenging surgical needs,” said Zu.

Yaccarino started his lecture with key statistics. In the U.S., over 600,000 spine fusions are performed, over 120,000 ACLs are replaced, and over 100,000 mastectomies are performed, according to Yaccarino

“Additionally, more than 500,000 burns require hospitalization, with, unfortunately, over 4,500 patients dying,” he said.

He went on to explain that most people are aware of organ transplants, but that tissue transplantation is less known.

"Everyone knows that you can transplant organs; it's been going on for centuries,” he said, explaining that heart, liver, and even lung replacements are commonplace. "But not many people know about tissue transplantation. That is that you can take a piece of my femur, for example, and use it in someone else's body, or a piece of my skin and use it in someone else's body,” he said.

Tissues can be transplanted among humans as well as different species of animals, he explained.

MTF Biologics is in the business of allografts, tissues transplanted between humans. “These tissues are engineered into shapes and forms to be used for surgical solutions,” he said.

In his presentation, Yaccarino discussed surgical procedures for spine fusion, which is a problem seen in individuals as they age. He explained that when an individual’s spinal cords and spinal nerves start to get degradation and disc space starts to change, the alignment of that person’s spine starts to create problems like pain and numbness.

“Spine fusion is a way to restore disc height and alignment to relieve pressure on spinal nerves,” he said. 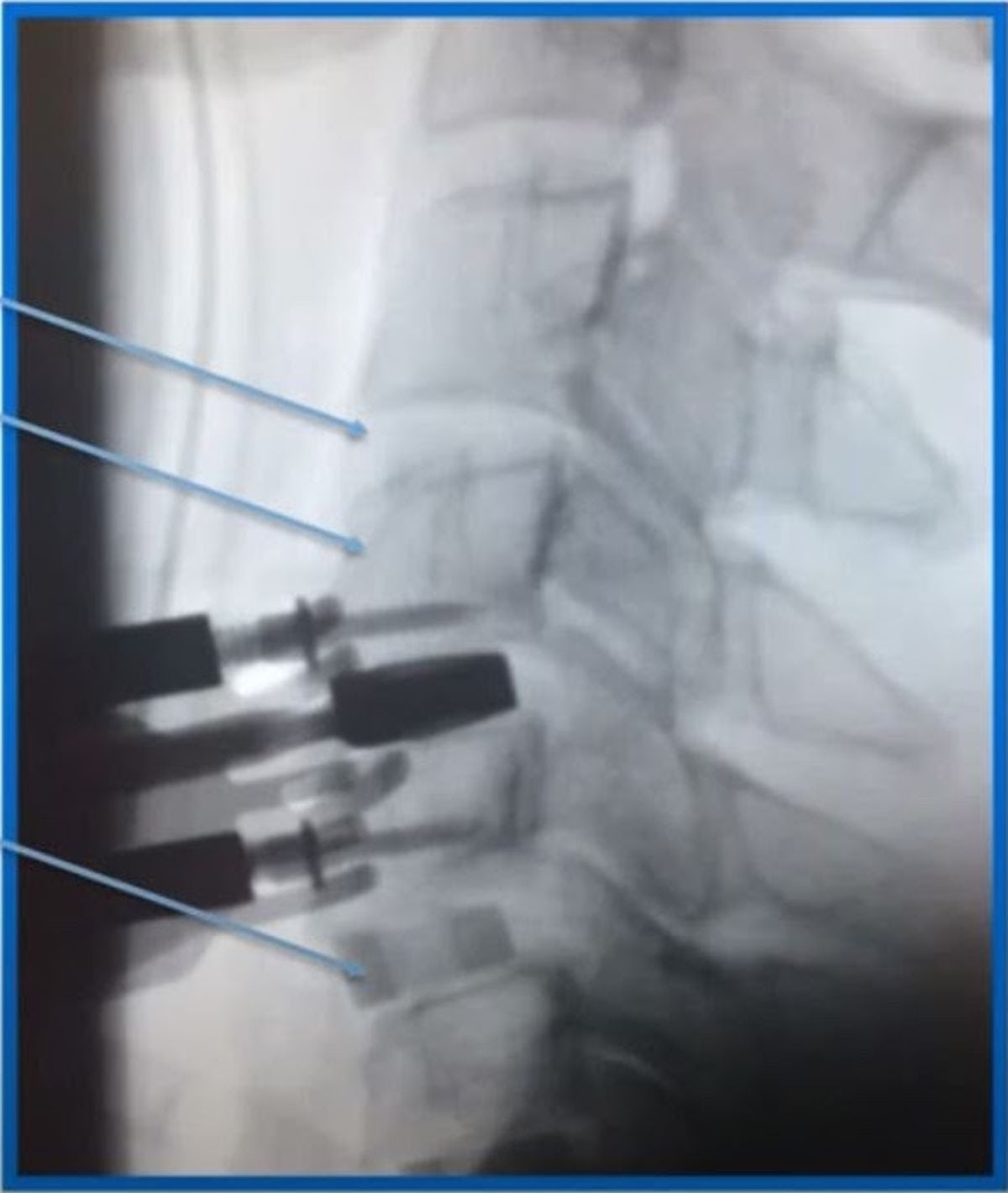 X-ray of a lower lumbar spine representing a healthy disc space and allograft spacer inserted into the spine.

During his presentation, he showed an x-ray of a lower lumbar spine representing a healthy disc space. The image also showed an allograft spacer inserted into the spine that restored the height of the disc space and the alignment.

Solutions for spinal fusion come in many different shapes and sizes. In presenting how the tissue solutions looked, he emphasized that they have been engineered for different surgical approaches.

"If you took an x-ray of someone, you won't find any of these shapes anywhere in the human body,” he said.

These allografts are created in a cleanroom environment, he said. “It is a controlled environment that has a low level of dust, airborne, microbes, aerosol and chemical vapors,” he said.

"The human tissue has so many things that allow it to have its healing and surgical solutions properties,” he said. He explained that by treating human tissue with radiation or chemical sterilization as with many other medical devices degrades the biomechanical properties of the tissue.

The key component in these cleanrooms is the high-efficiency particulate air (HEPA) filter that is used to trap particles that are 0.3 microns and larger in size. All air delivered to a cleanroom passes through HEPA filters, he said. The purpose is to ensure that the allograft solutions developed by MTF Biologics are as free from contamination as possible.

In addition to ensuring a contaminant-free tissue product, MTF Biologics operates around an important philosophy: honoring the gift. “We want to do as little to the gift that's possible,” he said, referring to tissue as gifts because they are donated.

“95% of our tissues come from deceased owners,” he said. “Families made the very difficult decision, at a time of great difficulty, to share the tissues of their loved one with MTF Biologics,” he said.

“Honor the Gift,” in fact, is one of the three pillars of the business.

A second pillar is to serve patients. Since its founding in 1987 as a non-profit organization, MTF Biologics has recovered over 120,00 donors; this includes bone, soft tissue, fresh tissue (living cells), skin, placenta (after a c-section birth). And their solutions have been distributed to over 90 million transplants in 50 countries.

To optimally serve patients, MDF pursues opportunities to advance science for challenging surgical procedures: this is the third pillar. An example includes plastic and reconstructive surgery.

“So what can we do to advance the healing [after these surgeries]?” he asked.

MTF solutions are designed to minimize non-union, which describes when bones and tissues do not heal even when they get the best treatment.

“High-risk patients need a little extra to make that healing happen,” he said.

MDF continues to advance science — for example, 3D printer technology and placental tissue development. Recently, MTF entered into an exclusive development agreement with another organization to develop and manufacture a novel, proprietary placental-based injectable treatment for osteoarthritis of the knee, which affects millions worldwide. The product is currently in clinical trials.

When Yaccarino was notified that he was invited to this speaker series, he responded, “Sure I'd love to come, who's the speaker? And they said, you. And I said, really. I'm honored. Did someone cancel on you?"

This is because he sees himself as an ordinary Joe who loves his work.

"I'm fascinated every day I come to work with what the human body can do, what we can do with the human body, and providing solutions to very challenging surgical needs," he said.

Yaccarino also notes that he’s been given great opportunities.

“I'm very grateful for the opportunities I've been given. I think one thing that certainly does distinguish me is my Stevens experience and education,” he said. “Stevens opened doors and gave me opportunities.”

He remains a part of the Stevens community as an Entrepreneur in Residence at Stevens Venture Center, where he’s participated for about 4 years.

Yaccarino ended his presentation with a call to action.