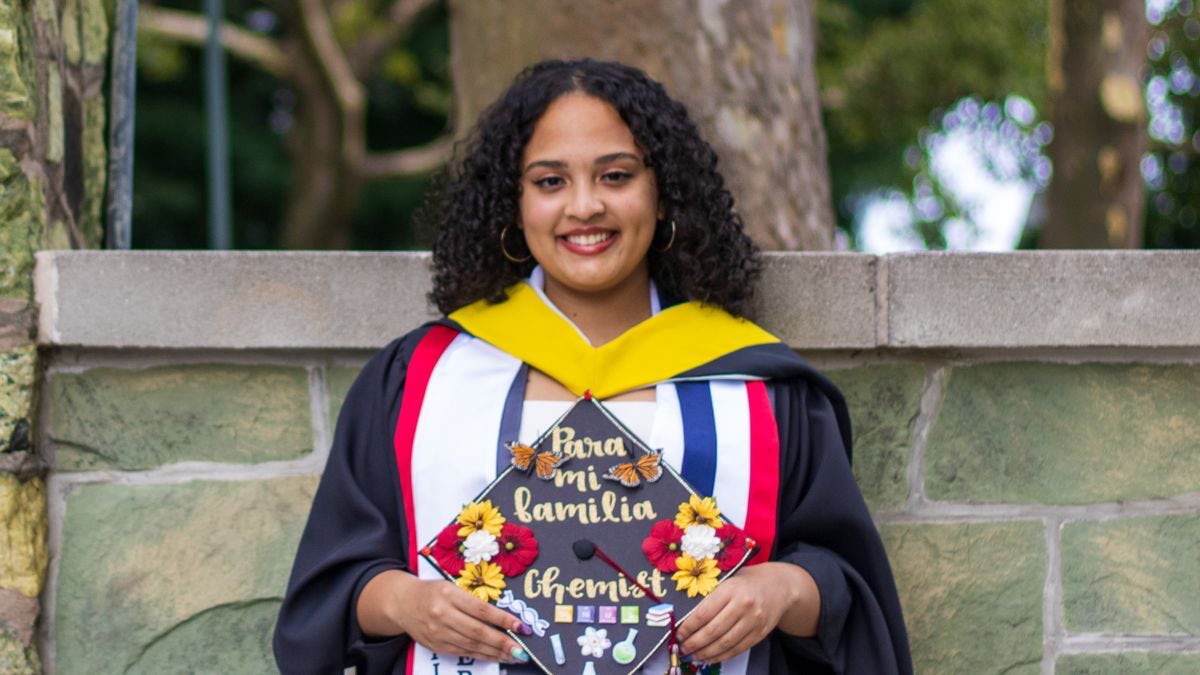 An advocate for diversity and inclusion, Christina Puntiel ’20 M.S. ’21 accepts a full-time position at Bristol Myers Squibb while continuing to give back to underserved communities

Fortunately, she was able to find support systems while earning her bachelor’s and master’s degrees in chemistry and analytical chemistry respectively — some offered through the university and some that she herself helped create.

Now a quality control microbiologist at Bristol Myers Squibb, Puntiel continues to give back to the Stevens community as an undergraduate mentor and a part-time graduate assistant for the Art Harper Saturday Academy, a precollege track of the Stevens Technical Enrichment Program (STEP).

She is also the most recent member of the Chemistry and Chemical Biology Department External Advisory Board and was chosen as one of only five alumnae to represent fifty years of women’s history as a Stevens Trailblazer.

Puntiel said her passion and responsibility, especially as someone from multiple underrepresented and underserved communities, is actively helping others.

“It’s important to learn and then pass that knowledge down so that people coming after you can do the same — to help them become the next generation of leaders,” she said. “I hope the work I’ve done at Stevens and the impact that I’ve made has inspired others.”

Growing up in Edison, New Jersey, Puntiel had dreamed of becoming a doctor. But in high school she discovered, “I cannot deal with the sight of blood.”

Rather than give up her dream entirely, the young science enthusiast reasoned how to channel her interests into a career that might accomplish similar ends through less graphic means.

“I’ve always loved chemistry. I want to help people. Pharma is probably the way. I can make medicine,” she said. “That’s how I chose my major.”

When it came to getting into and paying for college, however, the logic was far less clear.

Puntiel’s parents, who had moved to the U.S. from the Dominican Republic, had no experience with the American college application or financial aid processes. Like many first-generation college students, Puntiel found herself navigating much of the system alone.

“My parents were always there to support me, but there was only so much they could do since they didn't know what to expect,” she said.

Facing the convolutions of the higher education system required learning along the way — and sometimes winging it and hoping for the best.

“I was like, ‘All right, let’s try to figure this out. Hopefully I don't commit financial fraud or something,’” she said with a laugh. 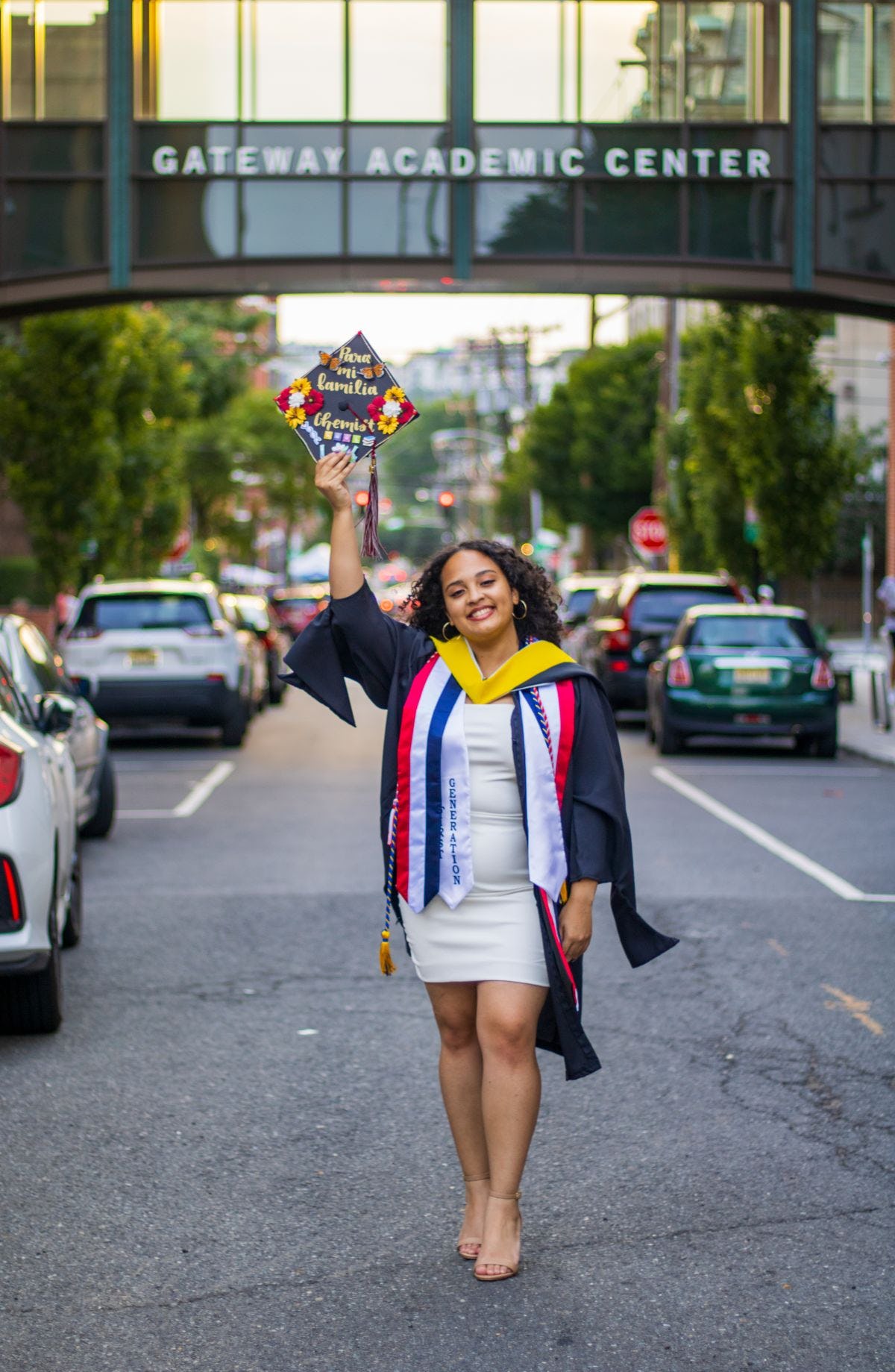 Although Stevens came with the advantages of reputation and proximity to family, what ultimately drew Puntiel to choose the school was the vibe she got while attending Admitted Students Day on campus.

“I fell in love with the atmosphere and the environment,” she said. “The people were very welcoming. I felt like I could see this place being home for four years.”

Puntiel participated in the Bridge Summer Program, a six-week residential program that helps incoming students acclimate to on-campus living while shoring up their academic skills before their first semester.

“Once you complete Bridge, you become part of STEP, and then you’re a STEP student for your entire time at Stevens,” she explained. “STEP was my second home during college. I lived and breathed STEP.”

The STEP program provides academic and professional resources and support to students from diverse backgrounds throughout their college careers.

The relationships Puntiel gained through the program, she said, were invaluable. STEP provided her with the support she needed but was not yet capable of asking for.

“That’s something I feel a lot of first-generation students deal with because we don’t want to seem like we don’t know what we’re doing,” she said. “But it’s okay to ask for help. That was hard to learn.”

The program also helped Puntiel navigate moments of self-doubt as a lower income, minority woman in a predominantly white, male institution and field.

Puntiel was awarded the Edwin E. Stevens and Martha Bayard Stevens Scholarships for academic excellence and leadership, both four-year awards.

In the fall semester of her fourth year, she enrolled in the Accelerated Master’s Program, which allows students to apply up to nine credits to both their undergraduate and graduate degrees.

As an undergraduate she worked as a student research assistant. The position allowed her to build up her professional lab skills while also developing her senior project exploring new, environmentally friendly methods for creating esterification reactions using a conventional microwave oven.

She also managed the STEP program’s social media as a student office assistant.

While completing her master’s degree, Puntiel worked as a graduate teaching assistant, conducting office hours, proctoring exams and grading papers for courses in general, organic and physical chemistry. Due to the COVID-19 pandemic, she did so entirely remotely.

Having taken Advanced Physical Chemistry as an undergraduate, she also landed in the position of assisting in a graduate-level course while still a graduate student herself.

Puntiel held numerous student leadership positions, including president of the American Chemical Society, president of the Chi Alpha Epsilon National Honor Society for students in access and scholar programs and vice president of the West Indian Student Organization, which she helped found.

“We needed a safe space for underrepresented students or people of different backgrounds so that they could come together, celebrate their culture and talk about issues on campus that needed to be addressed,” she said.

“I wanted to make sure that first-gen and other students were aware of all the resources available on campus and to make sure they knew their voice was being heard,” she said.

Puntiel cited her own experiences of marginalization as one example of why the committee is necessary.

“I’ve dealt with difficult situations of people not valuing my input or my abilities as a woman of color,” she said. “It’s important to change mindsets and to educate people about issues that may not affect the majority of the Stevens population but that people still face.” 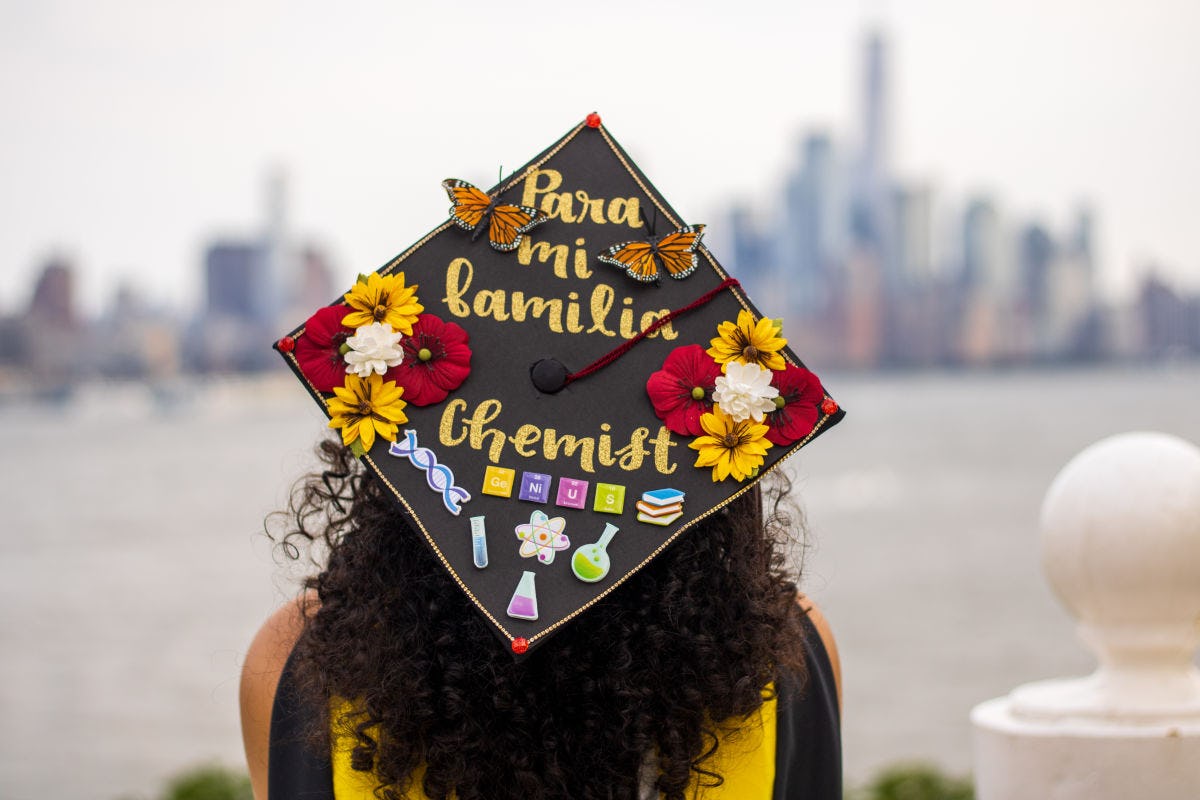 During the experience, she said, she “fell in love” with the company’s environment, family-friendly culture and work-life balance.

Puntiel returned to Bristol Myers Squibb in 2021 as a full-time quality control microbiologist in their Cell Therapy Development and Operations division in Summit.

“We take the T-cells of cancer patients and reengineer them so that, when we put them back inside the patients, it hopefully attacks the cancer and eliminates it,” she explained. “What I do is the final check to make sure there are no microorganisms or bacteria in the drug product before we return it.”

The position allows Puntiel to fulfill her childhood dream of helping people — even if it doesn’t take advantage of her chemistry degrees.

She recalled telling the company during the interview process, “I know my background is pure chemistry, but as long as you’re willing to teach me, I’m willing to learn,” she said. “That’s something I learned from being at Stevens — that flexibility and openness to learning what I don’t already know.”

For her leadership, integrity and contributions to the Stevens community, Puntiel was inducted into the Gear and Triangle Honor Society and awarded the 2016 Emerging Leaders Award, the 2019 Provost’s Lecture Series on Women in Leadership Award and the 2020 STEP Student of the Year Award.

Just weeks before completing her master’s, she was also invited to represent the 2010s decade of Stevens women at the Five Decades of Trailblazers Panel.

Sponsored by the Lore-El Center for Women’s Leadership, the virtual event marked the 50th anniversary since the university began admitting women as undergraduates.

For all her accomplishments, Puntiel said the honor culminated with her “highest point of impostor syndrome.”

“I guess I didn’t think what I was doing was being seen by a lot of people,” she said. “I just did it because I wanted to improve the future for the people that come after me, especially my STEP community.”

From mentee to mentor

Puntiel was invited to join the Chemistry and Chemical Biology External Advisory Board in Spring 2022. The board convenes once each year to review and advise on the department’s programs and strategic plan.

One of the youngest board members, Puntiel hopes to use the opportunity to advocate for students interested in less widely served majors and career paths.

Citing her own experience as example, she found campus career fairs and resources tended to be weighted toward engineering majors and future medical students. Yet interest in less popular tracks, she said, is still high.

In fact, two students approached her recently after a panel at which she spoke to ask if she’d be willing to mentor them through pursuing non-engineering careers in industry.

Puntiel now has students texting her for advice on everything from how to do an interview to how to deal with burnout.

“The fact that I can offer this help fills my heart with joy,” she said. “Instead of being a mentee, I’m a mentor now.”

“I don’t want to lose the skills and knowledge I gained at Stevens, especially my master’s in analytical chemistry,” she said. In the future she may also pursue an MBA.

Meanwhile, the unusual hours of her day job afford her the flexibility to give back to her beloved STEP community.

“From 12:30 p.m. to 10:30 p.m., Sunday to Wednesday, I’m a microbiologist. Thursday, Friday and every other Saturday, I’m a graduate program assistant for the Art Harper Saturday Academy,” she explained.

A precollege program under the STEP umbrella, the Academy prepares high school students from under-resourced communities to pursue academic degrees and professional careers in science, technology, engineering and math. Puntiel has been involved with running the program since 2020.

In her spare time, she also manages to squeeze in a side business crafting and selling string art online.

Puntiel credits her parents for her determination and work ethic.

“My parents were always pushing me to do my best. They sacrificed so much to support me and wanted me to have all the opportunities that they couldn't have,” she said.

“Being a first-generation college student is something I hold a lot of pride in,” Puntiel added. “It’s a really big part of my identity because it’s not just an accomplishment for myself, but also for my family.”