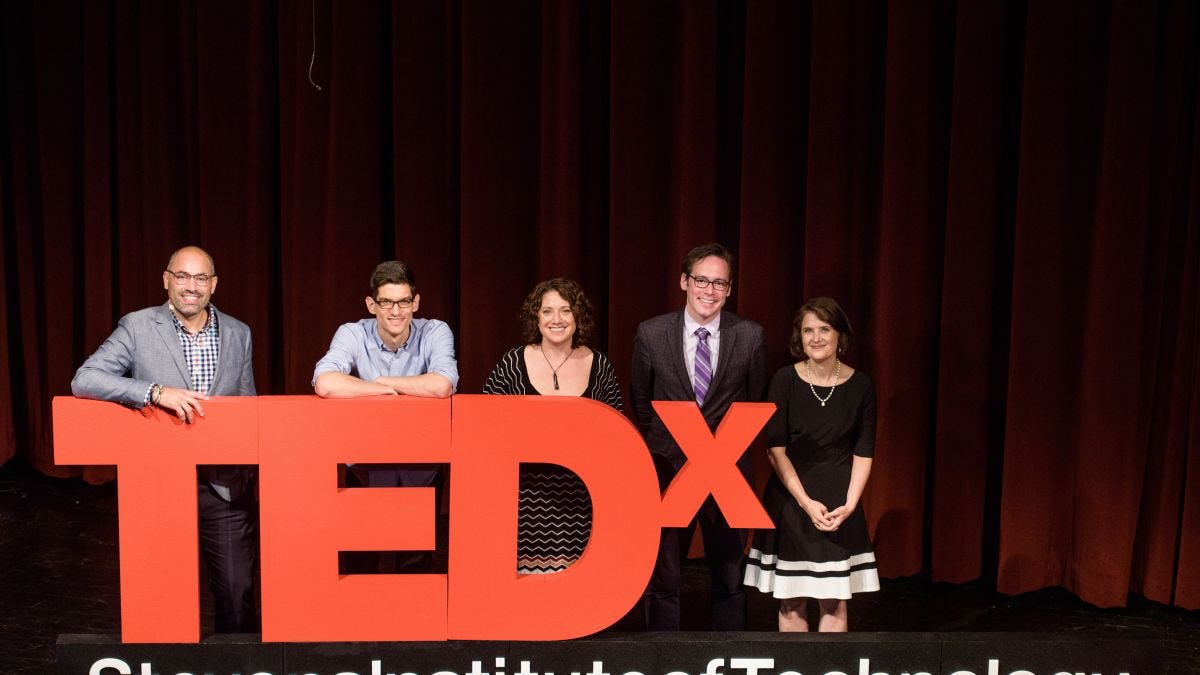 Nuclear warfare, calculus, mental health and stormwater runoff at core of TEDx talks at Stevens, capturing attention of thousands across the globe

Who knew that even the smallest amount of rainfall could overwhelm our sewer system, or that preparation for nuclear warfare could be funny? That calculus could be seen as analogous to art, or that two-thirds of college students who reported depression and anxiety do not seek help?

An exceptional group of Stevens professors and staff who captivated a standing-room only crowd filled with students, faculty and staff in DeBaun Auditorium — as well as thousands across the world via livestream — during the university’s first-ever TEDx event, a program of independently organized events with "ideas worth spreading" — that’s who. 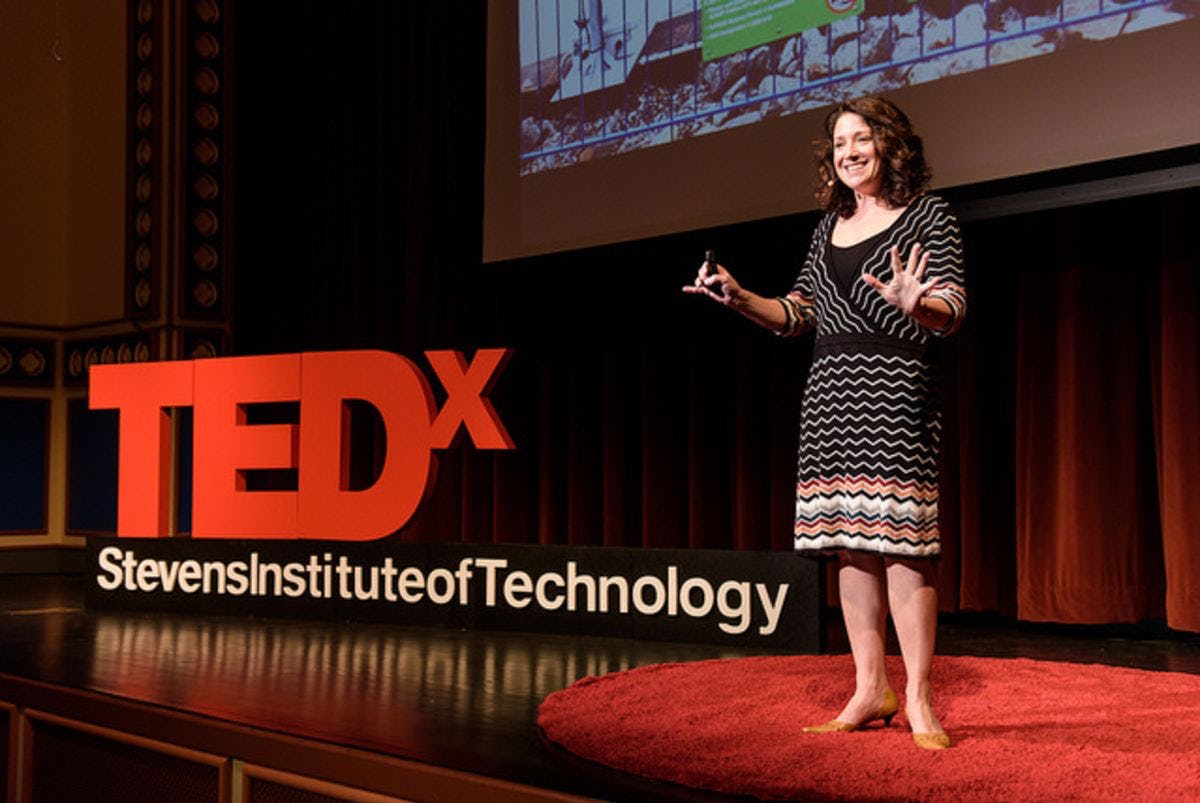 On September 12, Elizabeth Fassman-Beck, Alex Wellerstein, Jan Cannizzo and Melissa Shuman Zarin shared their research in diverse areas centered on the theme Through Collaboration, Impact. Master of ceremonies Aaron Price, founder of Propelify and the NJ Tech Meetup, let everyone know that the event was being watched live across the globe, from the UK to China.

Price and others acknowledged Blythe Nobleman, who as organizer and associate director of research and entrepreneurship outreach, brought TEDxStevensInstitutofTechnology to campus as way to showcase Stevens researchers to a far-reaching audience.

“This event marks a milestone in placing Stevens research on a global platform to inspire critical thinking, build community and share discoveries, aligned with a theme from our strategic plan; Through Collaboration-Impact” said Mo Dehghani, vice provost of research, innovation and entrepreneurship, whose office presented the talks. “Common to all the presentations is the immediate applicability of the research results to our everyday lives.”

Fassman-Beck, associate professor of civil engineering, drove home that point when she kicked off the program with “Looking Up the Downspout: Green Infrastructure for Roof Runoff,” which explored how even a small amount of rainfall can overwhelm our sewer systems and result in raw sewage being released into receiving waters surrounding urban areas. It’s a global issue faced by older cities and the cost of infrastructure upgrades reach into the billions of dollars. But there’s also another option.

“There is a suite of technologies in stormwater green infrastructure offering natural and engineered systems that can integrate with the built environment, and which work by promoting natural hydrologic processes and using stormwater as a resource,” Fassman-Beck said. “We have the technology, but green infrastructure is fostered by public demand.”

Having received numerous texts and emails from viewers around the world immediately following her talk, Fassman-Beck felt successful. “Mission accomplished! A conversation has started and that’s what’s truly important.”

“I try to have fun when talking about it; you have to have fun and keep it interesting when you talk about nuclear warfare,” he said. “The goal is to engage and if it’s all horror, people shut down.”

Wellerstein did just that, with his startling facts about how unprepared most Americans are if there were to be a nuclear attack which, he says, may be more likely today than it was during the Cold War. It may also be, however, less catastrophic than we imagine and survivable if we’re prepared.

And then there was Bert the Turtle, star of “Duck and Cover,” a civil defense film shown to schoolchildren in the 1950s, who elicited giggles from the audience. It’s OK to laugh, said Wellerstein, but we could learn something from the approach.

“Because it’s seen as so awful and terrifying, people get a blank spot on their brains and check out when thinking about preparations. But we have to find a way to communicate about nuclear weapons that give people real truths,” he said. “’Duck and Cover’ made nuclear weapons part of the threat landscape, and we would be well-served to think about it a little bit as a thing that might occur, but that we could survive.”

Wellerstein’s Reinventing Civil Defense Project, which he runs along with fellow Stevens professor Kristyn Karl, focuses on studying new ways of communication nuclear threats, especially using unusual or new media such as plays, video games and virtual reality. However, he will not be speaking at children’s birthday parties anytime soon.

Presenting the audience with another scary topic — calculus — Cannizzo, teaching assistant professor of mathematics, offered that the discipline is both more elegant and practical than it’s typically perceived. In “Reimagining Calculus Education,” Cannizzo made the case that intrinsic reflection of calculus can be beautiful, similar to that of art.

He said that students often ask him what the point is and when they will ever use calculus. Showing a slide of Vincent van Gogh’s The Starry Night, Cannizzo asked the audience if they could imagine ever asking that of the artist. “Starry Night is nice, Vincent, but are these paintings of yours good for anything?” he joked.

Getting serious, he told the story of how several years ago, Stevens calculus classes had a drop/fail/withdraw (DFW) rate of 35 percent, leading faculty in the Department of Mathematical Sciences to make sweeping changes to their teaching. They incorporated active learning techniques into lectures, focused more on conceptual understanding and harnessed technology to give students immediate feedback while solving calculus problems through the Gradarius learning platform, which was developed by Stevens faculty.

“We had to fundamentally change how we teach calculus.  “It took a lot of collaboration among faculty and a lot of communication with students,” he said. Through a set of changes and the incorporation of the Gradarius learning platform, the DFW rate is down to 10 percent, with increases in student satisfaction and a higher freshman retention rate.

“It’s about demystifying the path, and being present and real,” she said.

Stevens’ Speak Up! campaign has contributed to a doubling of bystander reports, a result that gives Zarin great pride. “The more reports we get, the more we’re able to reach out and help,” she said. “And these tools can be used by anyone, so our hope is that once our students leave campus, they’ll continue to be active bystanders.”

The event was followed by a reception attended by the speakers and audience, as well as the nearly 100 students who attended a live watch party in the Babbio Center.

“Having done research with Professor Fassman-Beck, it was interesting to see a less technical version of her research that the audience could respond to,” said Maryia Spirydonava, a fourth year civil engineering student. Her friend, Olivia Schreiber ’18, agreed.

“To see these topics presented in a digestible way was so engaging,” Schreiber said. “We were sponges.”