Taking Charge of Their Futures, More Than 1,000 Stevens Students Turn Out for Internship Fair and Co-op Interview Day 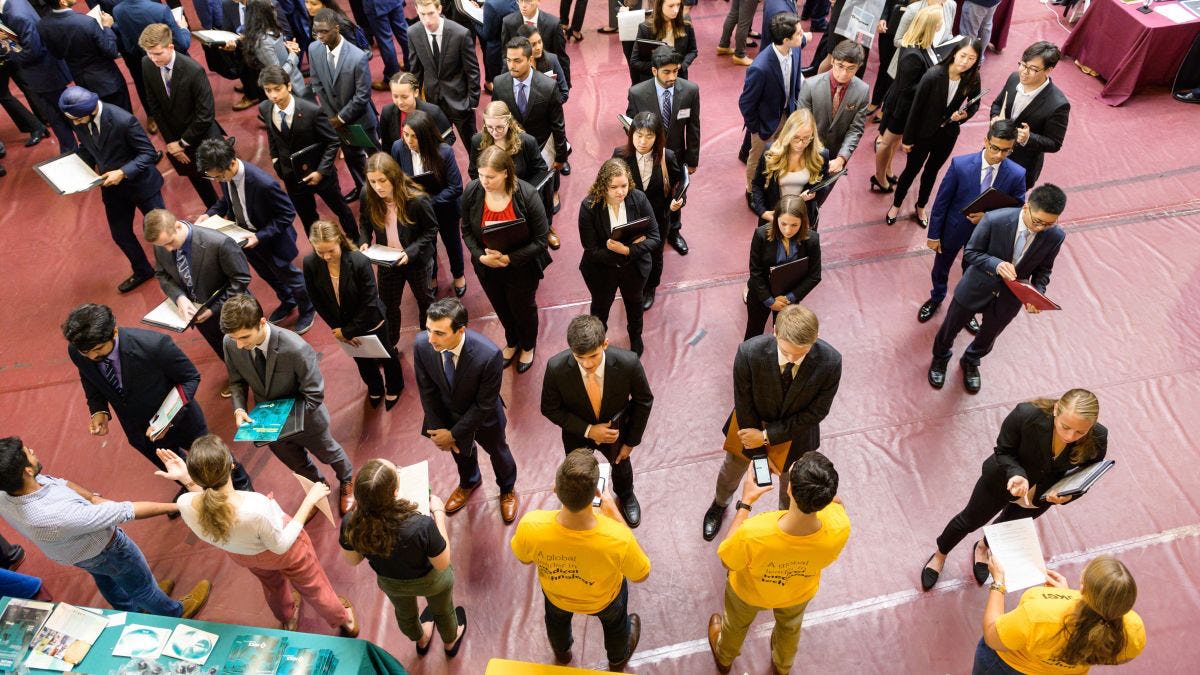 Stevens Institute of Technology students were up bright and early October 14 despite a day off from classes due to the Columbus Day holiday. The reason for their early morning rise? To meet recruiters offering career-building internships and co-op positions for the next semester and summer.

Stevens is a school that prides itself in tying education to a career path. Learning and hands-on application are deeply intertwined, which is why companies recruit from us year after year.
Lynn Insley, executive director of the stevens Career Center

Some students filed into Walker Gym to attend the Stevens Internship Fair, where nearly 30 companies were represented, including Bristol-Myers Squibb, Stryker, Pepsico, Zimmer Biomed and Verizon.

Meanwhile, nearby at the Canavan Arena inside the Schaefer Athletic Center, more than 600 scheduled interviews were taking place between Stevens co-op students and recruiters from nearly 100 companies such as Con Ed, Ethicon, Jefferies, Macy’s, Mindray and TD Ameritrade.

Students often cite the experiential learning the university provides as one of their chief reasons for coming to Stevens. 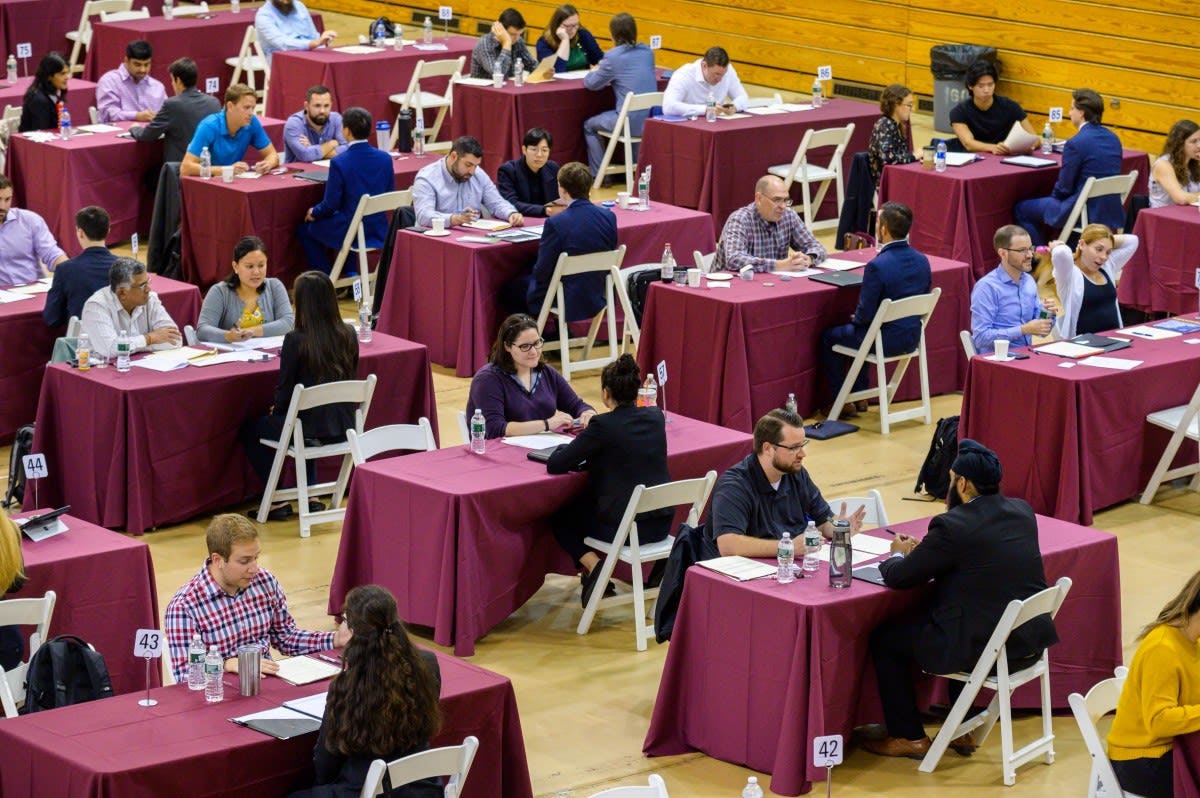 “I knew Stevens’ co-op was an amazing opportunity to get the experience companies are looking for before I graduate. And the multiple experiences that you can get while you’re still in school is unreal,” said Adrian Garcia, a software engineering sophomore in the midst of his first co-op at watchmaker Movado in Paramus, New Jersey.

The energy and seriousness students brought to the event was clearly appreciated by recruiters like Chris Fitzpatrick, university relations manager for Crestron Electronics, which has been recruiting Stevens talent for about a dozen years.

“I think the career services team does an exceptional job at getting out in front of the students very early on and prioritizing the importance of these fairs, as well as the co-op program.”

Employers tout Stevens as a proven resource for talent

Fitzpatrick is not alone in recognizing the outstanding efforts of the Stevens Career Center, which consistently ranks among the nation’s elite. Stevens was ranked no. 7 in the nation for “Best Career Placement” in the Princeton Review’s “The Best Value Colleges” in 2019. 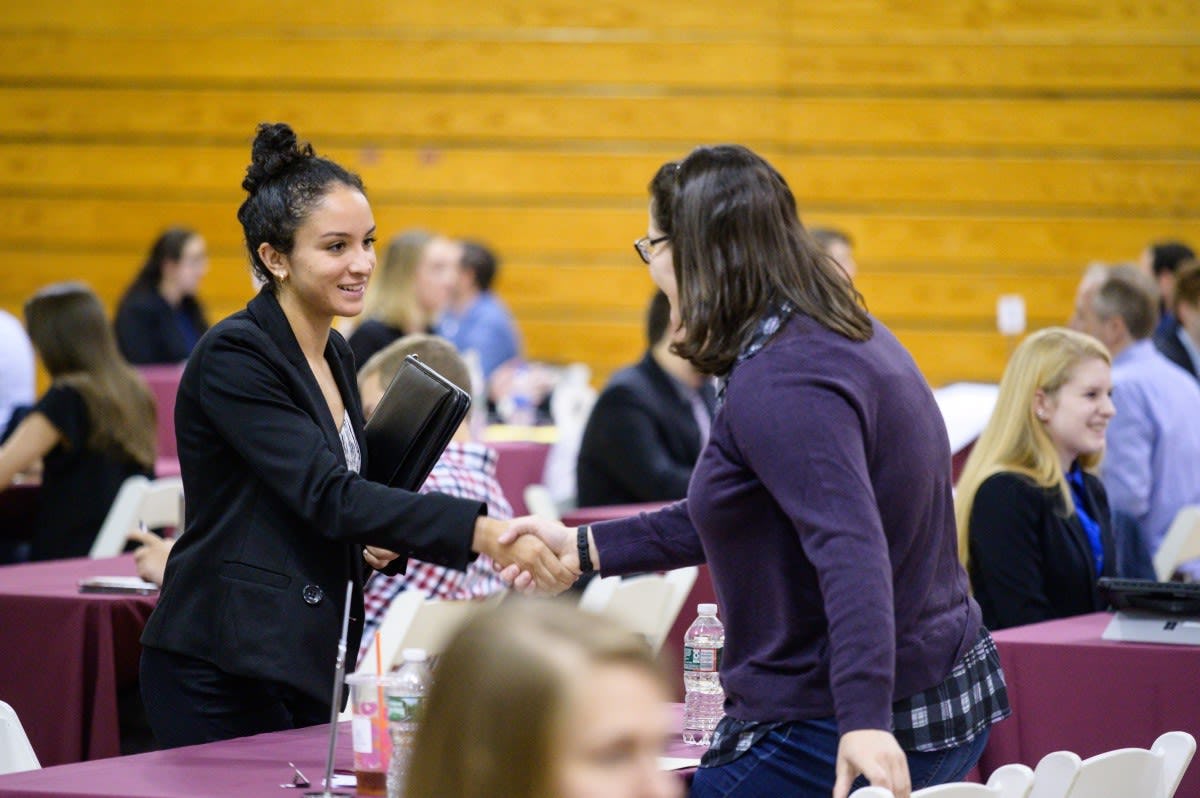 Lynn Insley, executive director of the Career Center, says the outstanding outcomes and job placement of graduates stem from the fact that students come to Stevens to learn and then apply their classroom knowledge out in the real world.

“Stevens is a school that prides itself in tying education to a career path. Learning and hands-on application are deeply intertwined, which is why companies recruit from us year after year. And as our reputation as a rich source for technology talent grows, the number of employers who recruit from us also grows,” says Insley.

What makes Stevens students so desirable to companies across all industries?

According to Michael Guatta, who visited campus to conduct co-op interviews on behalf of Macy’s, it’s their ability to problem solve, work in teams and communicate effectively. It’s the reason the iconic retailer has been recruiting interns and full-time hires from Stevens for nearly two decades, he says.

“You need to be nimble and be able to change with the times because things will change very quickly, especially in retail nowadays. Certainly their ability to problem solve new software, new programs that are out there, trends that are out there has been extremely helpful.” 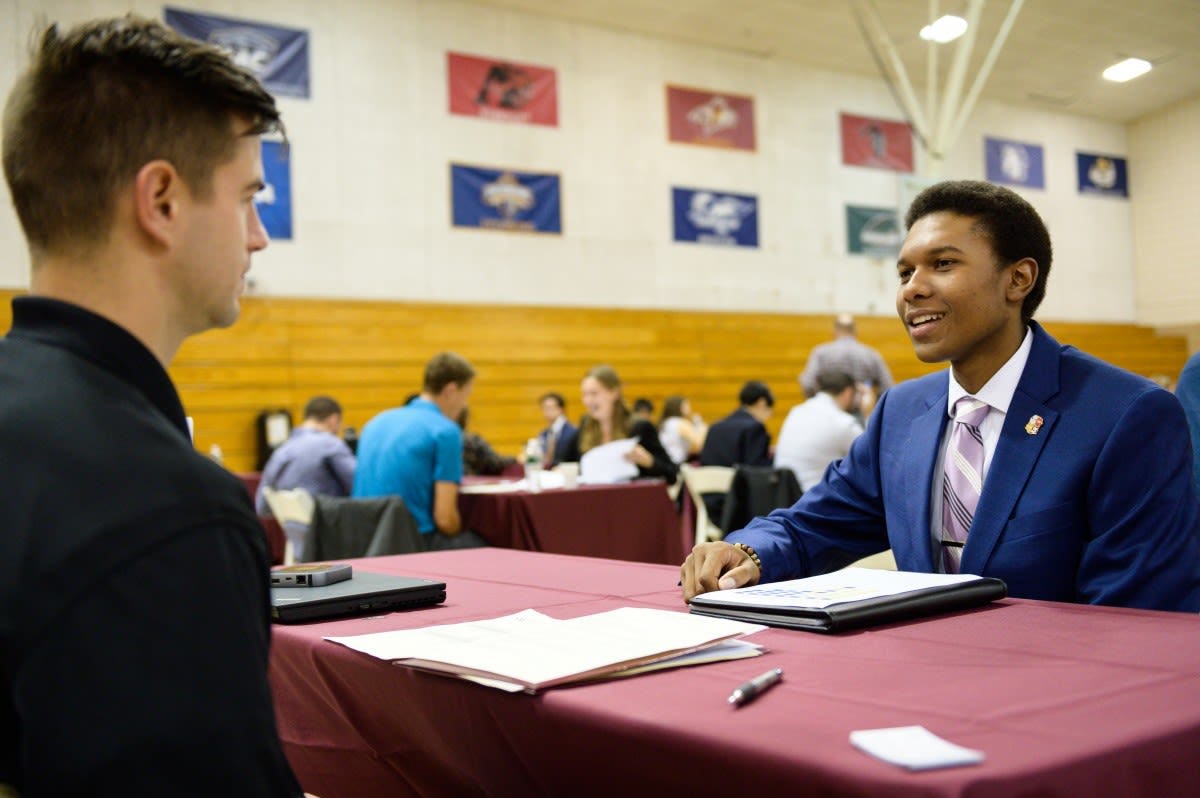 Some of the recruiters who were in attendance served as prime examples of the Stevens internship / co-op pathway to post-graduate careers.

James Meyers, a project manager at Moretrench, was looking to recruit candidates for possibly two co-op positions. Meyers graduated from Stevens in 2005 with a civil engineering degree and credits his internship at the company during his senior year for his current position.

“Our preferred hiring procedure is that they spend time as an intern or co-op in some capacity to both allow them to try out what their role is, but also to allow us to experience what capabilities they have.”

Stevens students often complete three to five work experiences that they acquire during their time in school. But it’s not just about the number, says Insley.

“In their internships and co-ops, Stevens students are typically tasked with duties and responsibilities similar to that of a full-time employee. Companies view their performances as auditions for full-time offers. So it’s in the best interest of the employers to really challenge their interns and co-op students,” she says. 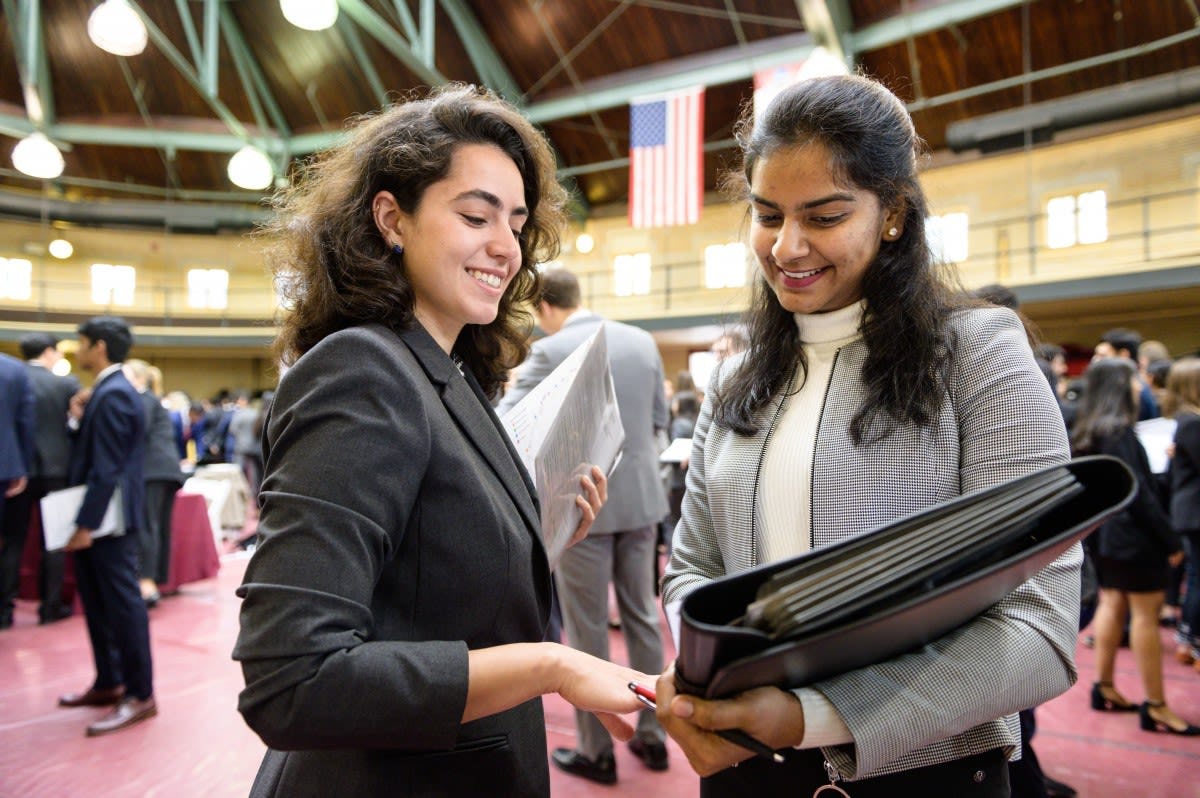 At Crestron, the internship and co-op program is indeed viewed as an important tool in developing their “talent bench,” according to Fitzpatrick.

“The highest levels within our company, all the way up to our CEO, support this program. They believe in the internship and co-op model as far as being able to provide students with meaningful experiences but also identify future talent. [Students] are really building things from scratch and coming up with concepts for what are going to be future projects, and working on actual, hands-on relevant products for us from start to finish,” he says.

When it comes to working on meaningful projects, it doesn’t get more impressive than an architectural wonder. The co-op positions Moretrench was looking to fill would be specifically for a project in Manhattan involving the Brooklyn Bridge, says Meyers, who knows firsthand the kinds of responsibilities and tasks interns and co-op students are given at his firm.

“We typically only take the cream of the crop because our industry is very demanding. You need to be able to think on your feet, learn quickly and process information. 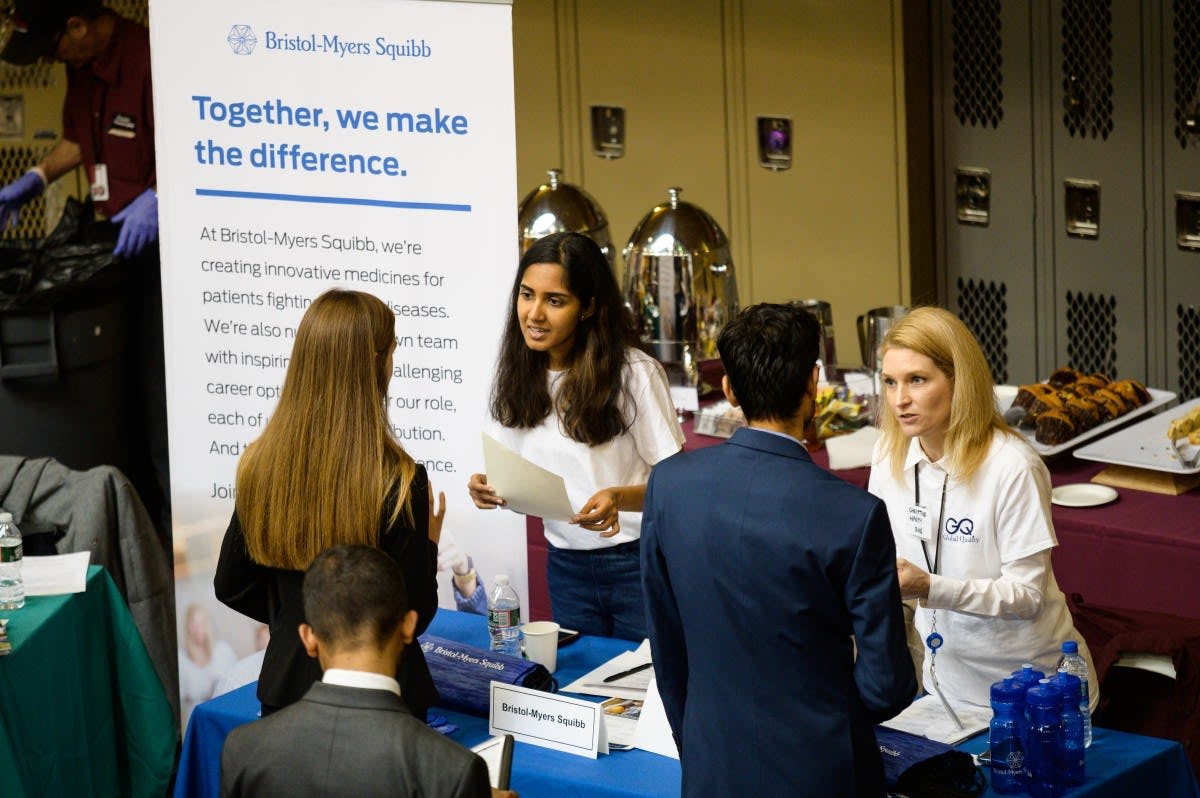 And the students at Stevens are as good as any of the students from any of the other schools that we pick that cream of the crop from. It’s a testament to the quality of students that come here, but also the education that they get.”

To learn more about the career outcomes of Stevens students and future recruitment events, visit the Stevens Career Center.

Companies looking to recruit Stevens students should contact the Stevens Career Center at 201.216.5166.