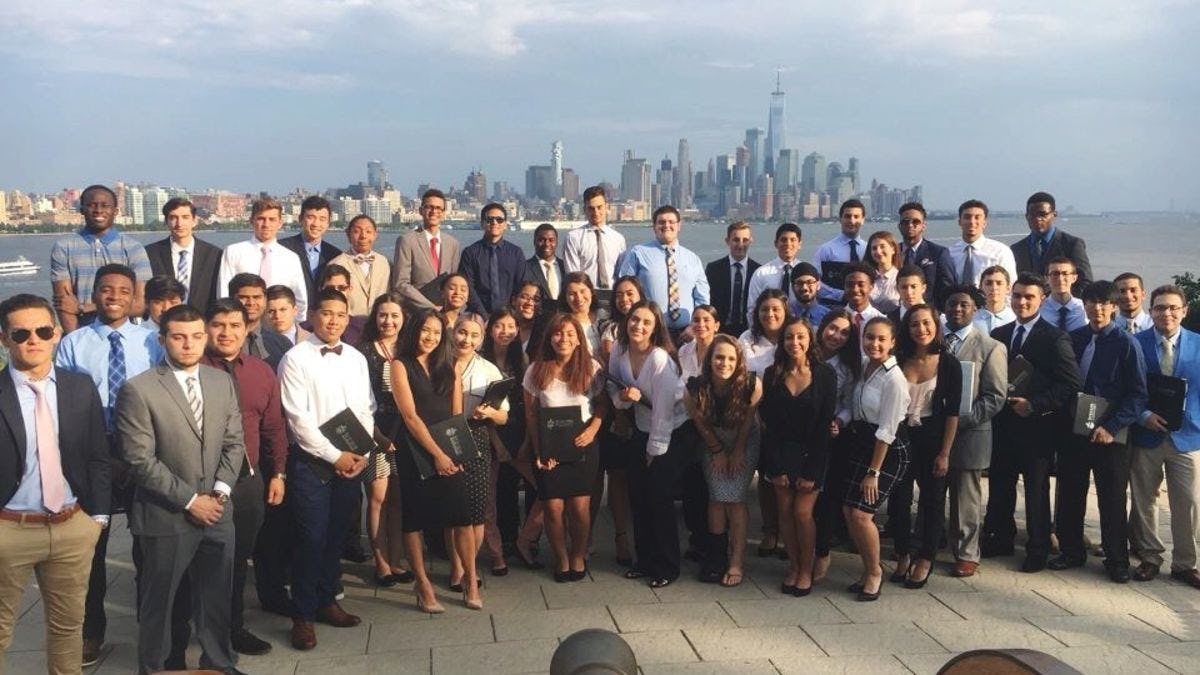 Approximately 50 incoming first-year students of Steven Institute of Technology received strategic career advice at a mock career fair August 3 as part of the Bridge Summer Program, a six-week residential program operated by the Stevens Technical Enrichment Program (STEP) to help incoming STEP students adjust to the curriculum and academic demands of some of the first semester core technical courses at Stevens.

Nearly 27 STEP alumni, representing companies ranging from Prudential, EY and GlaskoSmith Klein to Fisher-Price, L'Oréal and Colgate Palmolive, returned to campus to participate in the third annual event, which was held in the Bissinger Room of the Wesley J. Howe Center.

"I came because I wanted to give back," said electrical engineer Lam Vo '05 of U.S. Army ARDEC based in Picatinny Arsenal. He knows from personal experience what the current crop of STEP students are experiencing during this important milestone in their lives.

"As a freshman I didn't know anyone and STEP was very helpful to me in my transition to college," added Vo.

The Bridge Summer Program provides a leg-up for soon-to-be Stevens undergraduates from underrepresented and other diverse backgrounds.

One new student, Aolanie Vargas, described the rigorous program as an eye-opening experience that combined academics and important social interactions.

“I learned a lot about myself and the people that I’ll be meeting in the fall,” said the Jersey City native who plans on majoring in mechanical engineering.

“It was a lot of work – it was a tight schedule and classes were tightly packed. So I didn't expect to have much fun. But, between lectures and assignments, I got to know the other students and we became a close-knit group. I know that we’re going to stay together for a long time.”

Fellow student Ivan Arias of Elmwood Park, New Jersey, who will major in biomedical engineering, says the mock career fair provided a comfortable environment where students had room to make mistakes during the “job interview,” ask lots of questions and grow their professional network.

Arias said he chose Stevens for its highly-regarded co-op program and says the work experiences he’ll gain through the program will position him well in his career.

“The alumni I spoke to today offered great advice. Everyone I spoke to said they have good relationships with Stevens, which I’m really excited about as I start to build my resume and tap into this amazing network for jobs in the future.”

Sabrina Henry ’09 M.E ’11, a principal scientist at Johnson & Johnson, said her company regularly appears at Stevens career fairs and says her alma mater is a “core school” for recruitment purposes. She vividly her recalled her own Bridge summer experience as setting “the pace and tone for what you can expect academically at Stevens.”

“Entering Stevens as a freshman, you arrive from high school with proven academic achievement and involvement in extracurricular activities, but soon realize you’re now with people who were also standout performers in high school. Given this, the rigorous Stevens academic program causes you to raise your own bar and set even higher goals for yourself.”

Freddys Hernandez ’13, a project manager at Tishman Construction Corporation, agrees that being surrounded by students of such high caliber served as an important “reality check.” He looks back at his time at Stevens and as a STEP student as important markers towards his professional success.

“STEP was instrumental in my development at Stevens and it served as a critical launch pad to my career success.”