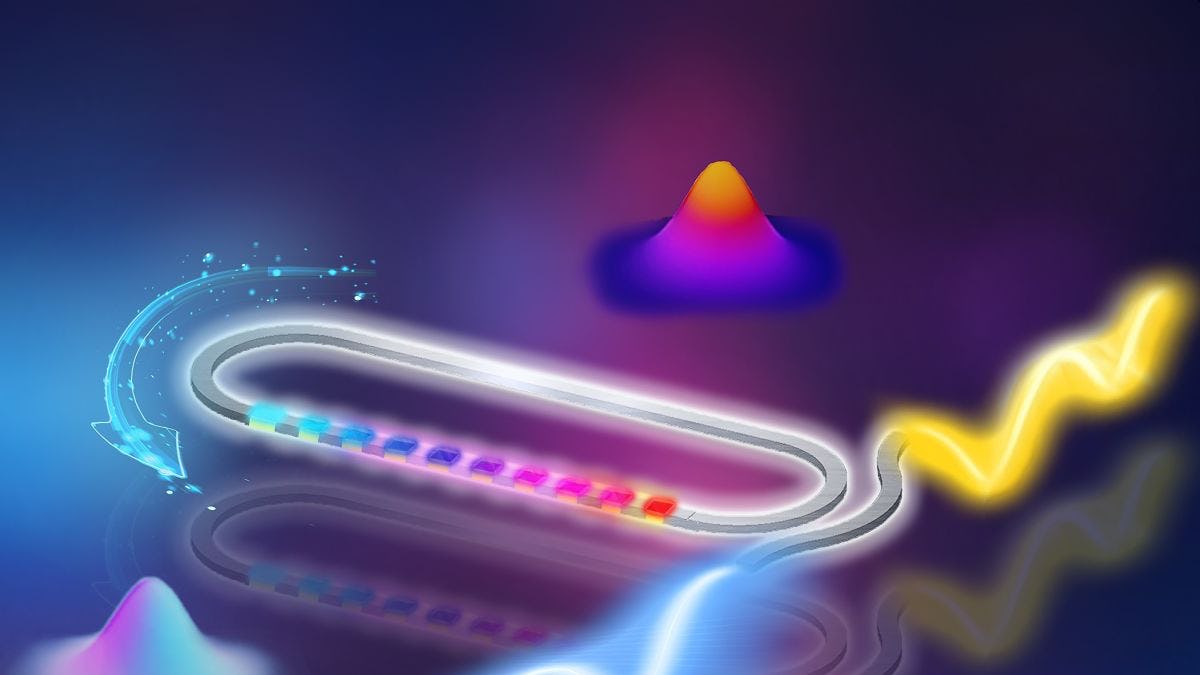 A light touch: A stylized version of a racetrack nanosandblasted on lithium niobate, where photons are coaxed to interact with each other under low energy conditions.

(Hoboken, N.J. – Sept. 18, 2019) -- To process information, photons must interact.  However, these tiny packets of light want nothing to do with each other, each passing by without altering the other. Now, researchers at Stevens Institute of Technology have coaxed photons to interact with one another with unprecedented efficiency — a key advance toward realizing long-awaited quantum optics technologies for computing, communication and remote sensing.

The team, led by Yuping Huang, an associate professor of physics and director of the Center for Quantum Science and Engineering, brings us closer to that goal with a nano-scale chip that facilitates photon interactions with much higher efficiency than any previous system. The new method, reported as a memorandum in the Sept. 18 issue of Optica, works at very low energy levels, suggesting that it could be optimized to work at the level of individual photons — the holy grail for room-temperature quantum computing and secure quantum communication.

“We’re pushing the boundaries of physics and optical engineering in order to bring quantum and all-optical signal processing closer to reality,” said Huang.

To achieve this advance, Huang’s team fired a laser beam into a racetrack-shaped microcavity carved into a sliver of crystal. As the laser light bounces around the racetrack, its confined photons interact with one another, producing a harmonic resonance that causes some of the circulating light to change wavelength.

That isn’t an entirely new trick, but Huang and colleagues, including graduate student Jiayang Chen and senior research scientist Yong Meng Sua, dramatically boosted its efficiency by using a chip made from lithium niobate on insulator, a material that has a unique way of interacting with light. Unlike silicon, lithium niobate is difficult to chemically etch with common reactive gases. So, the Stevens’ team used an ion-milling tool, essentially a nanosandblaster, to etch a tiny racetrack about one-hundredth the width of a human hair.

Before defining the racetrack structure, the team needed to apply high-voltage electrical pulses to create carefully calibrated areas of alternating polarity, or periodic poling, that tailor the way photons move around the racetrack, increasing their probability of interacting with each other.

Chen explained that to both etch the racetrack on the chip and tailor the way photons move around it, requires dozens of delicate nanofabrication steps, each requiring nanometer precision. “To the best of our knowledge, we’re among the first groups to master all of these nanofabrication steps to build this system — that’s the reason we could get this result first.”

Moving forward, Huang and his team aim to boost the crystal racetrack’s ability to confine and recirculate light, known as its Q-factor. The team has already identified ways to increase their Q-factor by a factor of at least 10, but each level up makes the system more sensitive to imperceptible temperature fluctuations – a few thousands of a degree – and requires careful fine-tuning.

Still, the Stevens team say they’re closing in on a system capable of generating interactions at the single-photon level reliably, a breakthrough that would allow the creation of many powerful quantum computing components such as photonics logic gates and entanglement sources, which along a circuit, can canvass multiple solutions to the same problem simultaneously, conceivably allowing calculations that could take years to be solved in seconds.

We could still be a while from that point, Chen said, but for quantum scientists the journey will be thrilling. “It’s the holy grail,” said Chen, the paper’s lead author. “And on the way to the holy grail, we’re realizing a lot of physics that nobody’s done before.”