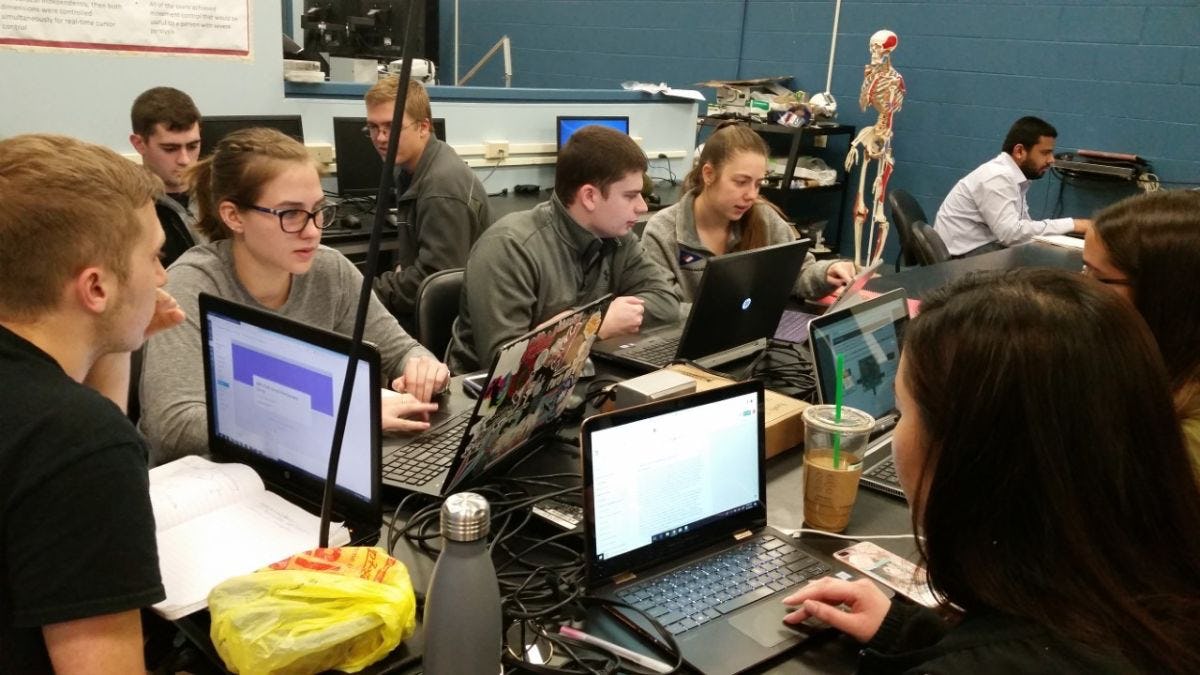 Hazelwood's students in the laboratory

Patented in 1986 under the straightforward title “apparatus for production of three-dimensional objects by stereolithography,” today’s 3D printer was born of the idea that printing could go beyond paper — revolutionizing the way we look at structures and machines today. Engineers can now print components for bridges and even rocket engines, all because of an ambitious venture that somebody cared to document.

The home of innovation, Stevens Institute of Technology offers undergraduates a rare opportunity: to take their ideas from scribbles on a paper or experiments in the lab, to a viable business patent under the guidance of biomedical engineering professor Vikki Hazelwood. While the invention process begins as a set of ideas, it becomes more complex once patenting enters the conversation.

Stevens students interested in the intellectual property landscape can find an ally in Hazelwood, who has taught hundreds of students about the invention and patenting process in her senior design class.

“They’re learning about constraints and market needs,” said Hazelwood. “And they’re preparing a design concept or a couple of concepts and understanding the constraints that they have to work within.”

Her students learn to fine-tune their proposals down to a proof of concept or prototype by the end of the first semester.

“It could be a physical device, or it could be an algorithm or something that represents an aspect of the project that would prove a working principle,” said Hazelwood.

“Then, as students go through the testing phase of their prototypes, they have to start thinking about presenting their project at the Northeast Bioengineering Conference,” she said.

The Northeast Bioengineering Conference is an annual event focused on stimulating collaboration and promoting biomedical engineering research and education programs.

Hazelwood explained that, as students write their abstracts for the conference and begin to prepare their ideas, it becomes clear that protecting their intellectual property — a common topic of discussion throughout the class — acquires a new level of importance.

“They discover that there are certain things that they want to keep secret,” she said. “Lo and behold, their next lesson is to learn how to create intellectual property.”

Throughout the experience, students participating in Hazelwood’s senior design class learn about the practical and business considerations that can cause a great idea to fail.

In addition to knowing how to develop new ideas, students need to understand how to protect their right to their own ideas and how to navigate the development of new ideas in the business space, according to Hazelwood.

“All students will prepare an invention disclosure and describe the value proposition for their idea. Students may certainly select a project that serves the greater good. If you want to cure an orphan (rare) disease, and you have an idea for a medical device that would do that, you can do that in my classroom,” Hazelwood said.

“But in these exercises, students begin to recognize the harsh reality that it may be difficult to find investors who are willing to support multi-billion dollars’ worth of research for an orphan disease that’s only going to cure five people” she said. 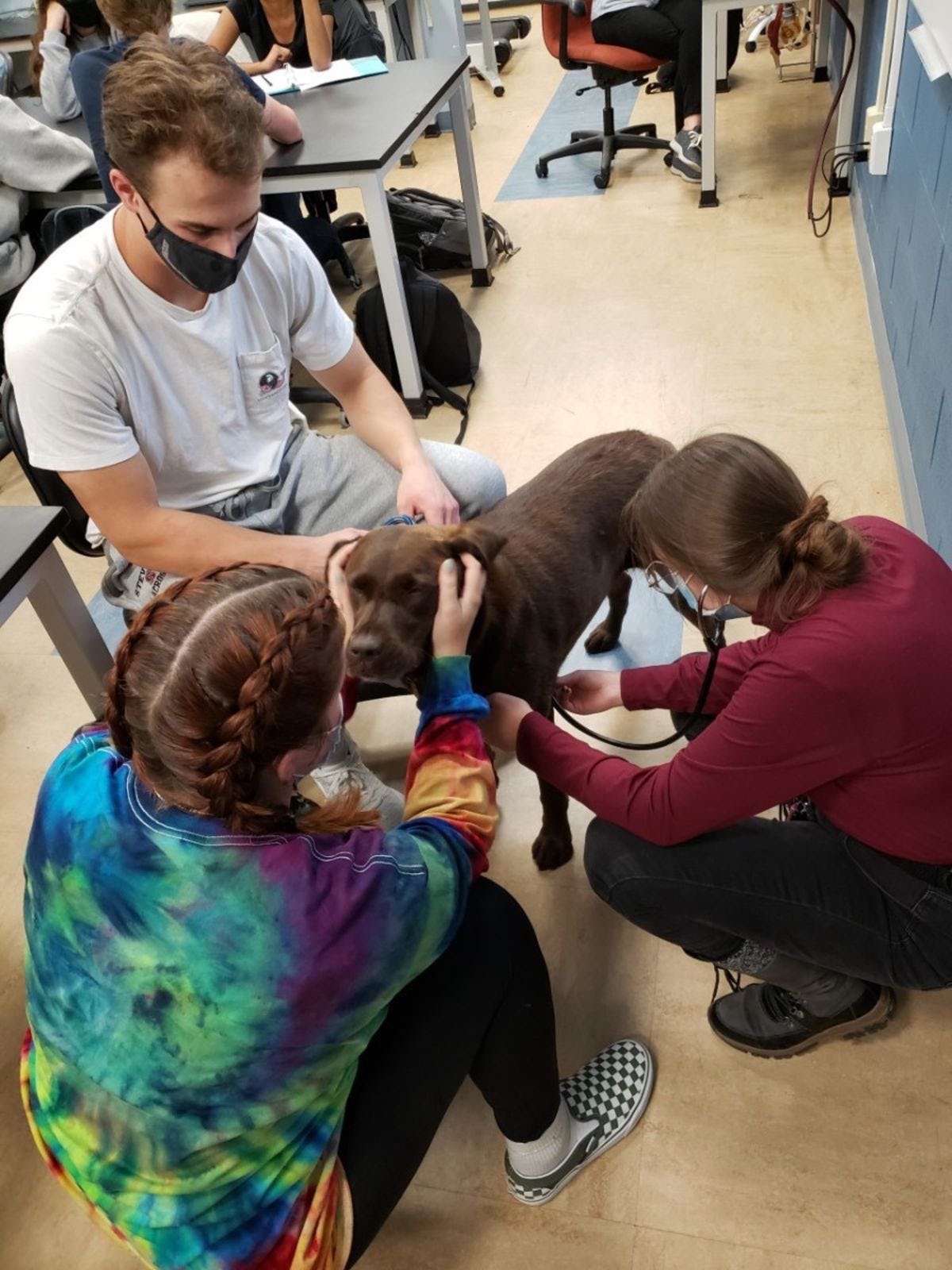 Students Aleese Mukhamedjanova '22, Henry Johnson '22 and Sadie Clark, '22 collaborate with a veterinarian — BME alumna Lindsay Daly, DVM '12 — who treats animals in high volume shelters. The team is developing a system to help monitor animals’ safety as they are being prepped for surgery.

According to Hazelwood, intellectual property is critical to the success of the invention — to convey an idea to others, obtain funding, and move it forward. This is why students have to be educated in this process and understand related regulatory and business factors, Hazelwood explained.

Understanding intellectual property, quantifying the potential market for a product, and identifying the FDA review pathway were crucial components of the Stevens student experience, according to Stevens alumna Katherine Freed Matos ’08.

“Professor Hazelwood pushed us to step outside the comfort of our engineering worlds and build new skills,” recalled Matos.

According to Matos, Hazelwood’s senior design class helped her decide what she wanted to do in her career.

“I struggled with selecting a career path where I could combine my engineering education and other skills,” she said. “Ultimately, I decided to study health law so that I could help bring new healthcare products to market,” she said.

She said that in her professional experience, the intellectual property landscape is a critical part of biotechnology development. She adds that her Stevens education and senior design experience taught her the framework for solving problems that she still uses today.

Matos is listed as a principal inventor with other Steven alumni and Stevens advisors on a Stevens-funded patent related to breast cancer imaging.

The process took years, she explained. But she believes that young engineers should understand intellectual property as it can be a distinguishing factor for life after graduation.

Jeckin Shah ’07 knew he wanted to be an engineer. A small part of him wanted to become a physician but felt that he could better advocate for public health as an engineer.

“I wanted to help people and realized I can impact a larger number of folks by becoming an engineer and making medical devices,” he said. “So, I chose BME as my major and quickly learned the foundation that helped me gain insight into companies and how they work.”

Shah, currently in product development at electroCore, is working on the next generation product to treat migraines using a non-vagus nerve stimulator.

Today a principal inventor of a muscle pain detection device, he started his career at Stevens Proof of Concept (SPOC), formerly a spin-out company from Stevens.

One of the biggest lessons he learned throughout the patenting process in Hazelwood’s class, and as part of his first career experience, was knowing how to speak with other engineers and lawyers.

“The biggest realization I had is you don’t need something 100% functional or manufacturable to receive a patent,” he said.

Shah credits Hazelwood for helping shape his career. His experience at Stevens even led him to convince his brother-in-law, now in medical school, to not only go to Stevens but to become a BME major under Hazelwood.

Mentorship that goes beyond the classroom

Both Matos and Shah hold Hazelwood in high esteem, not only considering her a professor but also a mentor.

They are not the only ones. Some of Hazelwood’s students have come back to her years later to express how vital knowing intellectual property was in their careers.

“They’re in their job and say, you know, I was working on a project, and my company said, patent this idea. And next thing you know, the attorney dropped a bunch of papers in my lap. And if I hadn’t had your course, I wouldn’t have known what I was doing,” Hazelwood said.

Teaching students about the patenting process is a part of Hazelwood’s work that she enjoys. But it’s more than a job for her.

She maintains strong relationships with many of her former Stevens students, reconnecting with them and serving as a mentor. She’s even recently joined some of them on a bike ride and a socially distanced hike.