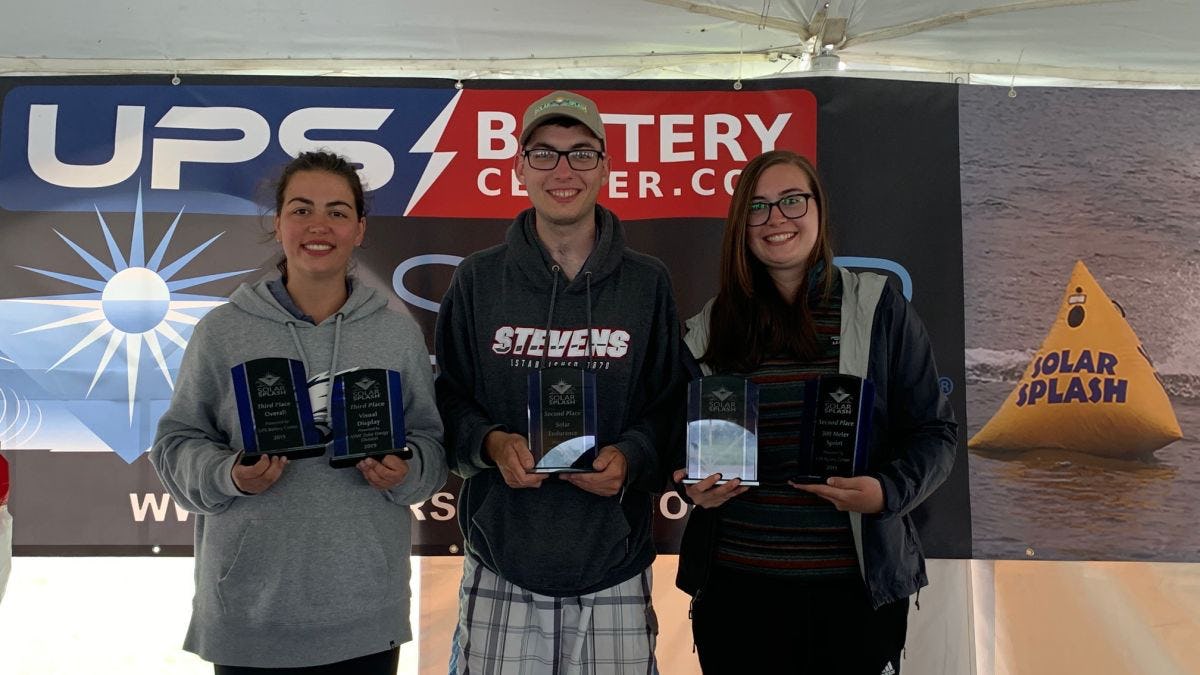 The competition, which was held June 11-15 in Springfield, Ohio, was the third appearance at Solar Splash for Stevens and the team’s advisor, Research Associate Michael DeLorme – and marks their best overall performance to date. Solar splash judges score entries in seven categories, including four on-the-water events: qualifying, slalom, sprint and endurance. The team’s raw score total was 936 out of a possible 1,000 points – within just 25 points of the top place.

Bringing tech to the water

That level of performance requires much more than just showing up for the races. The students worked all year to optimize a custom racing boat, building on the lessons learned by the two previous teams – and making the most of the Stevens marine research facility, the Davidson Laboratory, to test out their designs.

Last year’s team hand-built a new hull, an ultralight weight carbon fiber composite shell weighing in at just 55 pounds – over 250 pounds lighter than the previous hull, making it one of the lightest in the competition. It also has a stern appendage, which means the students can transform their boat from a planing hull for the high-speed sprint event into a displacement hull to reduce drag during the endurance race.

Team member Justin Sitler thinks the boat could only have been built at Stevens. “The great hull design is definitely due to the unique expertise we have from having a naval architect as our mentor as well as unique access to Davidson Laboratory to do model testing of hull designs,” he says.

This year’s technical goals were also lofty. The first was to build a custom propulsion system that doubled the power and cut the weight in half. The team met that goal and then some, cranking up the power to 24.5 horsepower and whittling its weight to just 90 pounds.

The second technical goal was designing an energy management system that tracks and analyzes data from the solar panels, batteries, motor and sensors. This enables the Stevens team to optimize the boat’s performance in real time, especially during the endurance event when knowing precisely how hard to push the boat in the final moments of a 2-hour heat can make a big difference.

This year, the team finished three boat lengths – about 5 seconds – behind the first-place boat in both heats. It was an unexpected outcome, even for the boat’s endurance skipper. “We had been so preoccupied with trying to make the boat go fast, performing well in the endurance race caught us by surprise!” writes Sitler.

The Stevens students brought more than just their tech A-game to this year’s competition. “Beyond their technical accomplishments, Justin, Megan and Tori were recognized for their kindness, integrity and sportsmanship,” writes DeLorme. “They made Stevens proud and it was an absolute pleasure to have had the opportunity to work with them.”

That sportsmanship led the Stevens team to donate their previous boat to another team so that they could compete. If that sounds exceptional, DeLorme reframes it as gratitude. He says the support of industry sponsors has been mind-boggling – and that Solar Splash itself brings out the best qualities in competitors and drives students to innovate. “This competition is well done and the people who put it on engender that spirit,” says DeLorme.

Sitler, who will be staying on as an advisor for next year’s team while he earns his Ph.D. in mechanical engineering at Stevens, says the hours poured into the competition stand out among the projects and internships he did as an undergrad. “The best part of the competition itself was seeing the hard work we put in over a year and all of the design decisions we made up until this point come together and perform really well,” he writes. “I'm really proud of the boat because we designed and built it ourselves.”

To learn more about the Stevens team and Solar Splash, visit the team’s website or Facebook page.

To sponsor or join next year’s team, contact Michael DeLorme at [email protected].