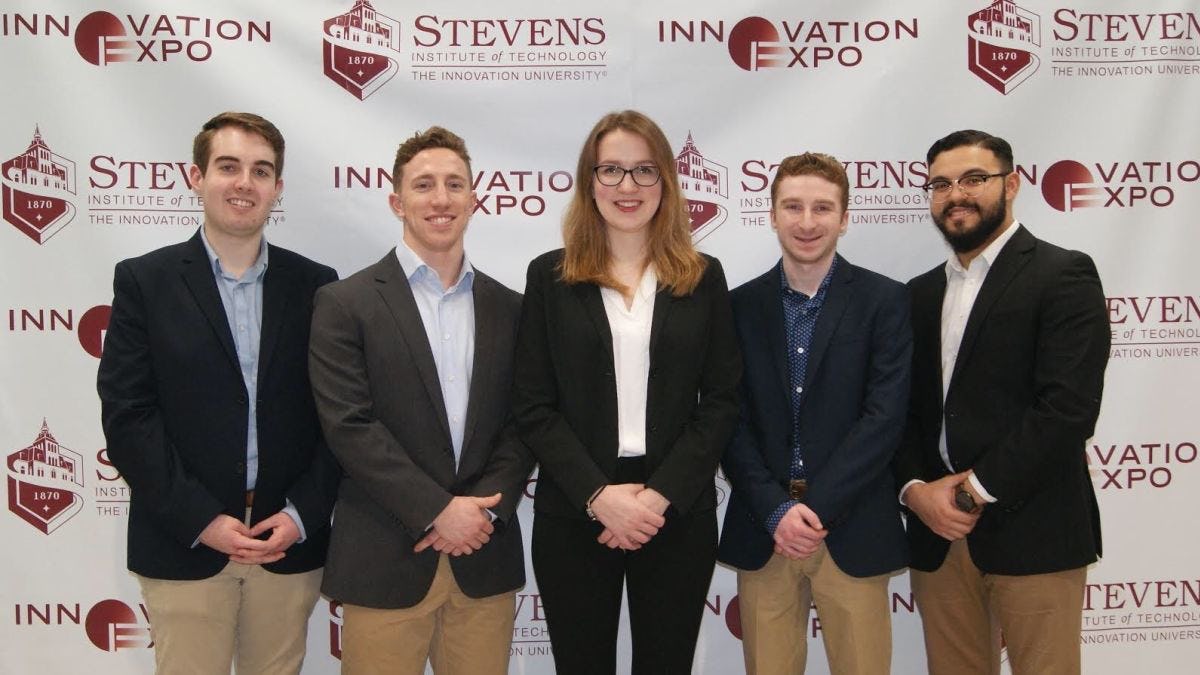 “The knee bone’s connected to the thigh bone.”

While this song lyric introduces children to human anatomy, it falls short of accurately describing the complex system design of the human knee–encompassing bones, cartilage, ligaments, tendons and nerves. The knee requires individual components to work together for proper function or else it can cause pain and, like modern complex systems, fail.

Ian Hipschman, an engineering management student at Stevens Institute of Technology, knows about knee pain. He was diagnosed at early age with juvenile rheumatoid arthritis, a condition that affects his joints–particularly his knees. So, when tasked to incorporate technology in a novel way to address issues with knee joints as part of their senior design project, Ian and fellow Stevens classmates Theodore D'Amico, John Mottole, Hashem Selim and Izabela Serowik jumped at the opportunity.

"My intricate knowledge of knee pain and swelling makes it easy to empathize with those who need knee replacement surgeries," says Hipschman. "When Johnson & Johnson proposed smart joints, the knee was where our passion was."

Izabela Serowik, another engineering management student, led the team. "I wanted to work on a project that I knew I could be passionate about, with people that I could depend on and share that passion with," she says.

The team’s solution, OrthoInsight, is a first of its kind sensor-enabled "smart" implant for knee joints that provides real-time information about the internal conditions of the joint prosthetic.

Recently, the team’s solution was selected from among 60 undergraduate, graduate and Ph.D. research posters to win first place in the 2018 Johnson & Johnson Engineering Showcase. 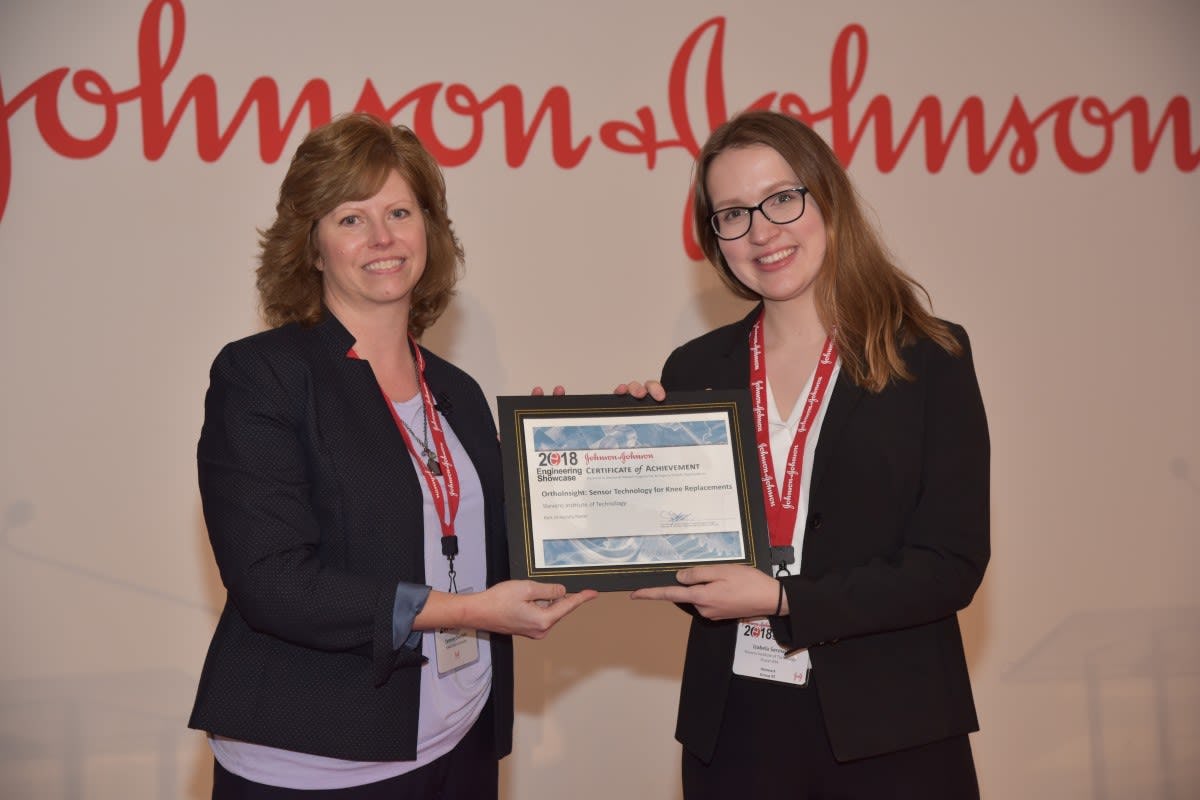 Serowik accepting the award on behalf of the team at the 2018 Johnson & Johnson Engineering Showcase.

"We were absolutely surprised by this win. First place across 60 university projects is monumental," says Hipschman.

"This win shows me that there is a widespread love and appreciation in the healthcare community for ideas that can help in ways that have not yet been attempted," says Hashem Selim, a software engineering student at Stevens.

Serowik adds, "We felt validated that our work had meaning and could potentially impact people in the future."

In 2017, Americans spent hundreds of millions of dollars on about 700,000 total knee replacements. About six percent of those knee replacements required revision surgery. As baby-boomers transition to senior citizens and life expectancy continues to rise, this number is expected to increase dramatically over the next decade.

The team made it their goal to reduce the number of total knee replacement revision surgeries, and–with the opportunity to leverage smart technology to achieve their aim–they developed OrthoInsight.

"As a group, we identified key areas that were ripe for innovation, and put our heads down doing the research and hard work required to design such a system," says Hipschman.

OrthoInsight sensors measure force on the knee and send that data via bluetooth to a mobile phone and web application where it is analyzed and visualized. The sensing system is powered by piezoelectric components, meaning it is charged simply by the compressive force created while walking. 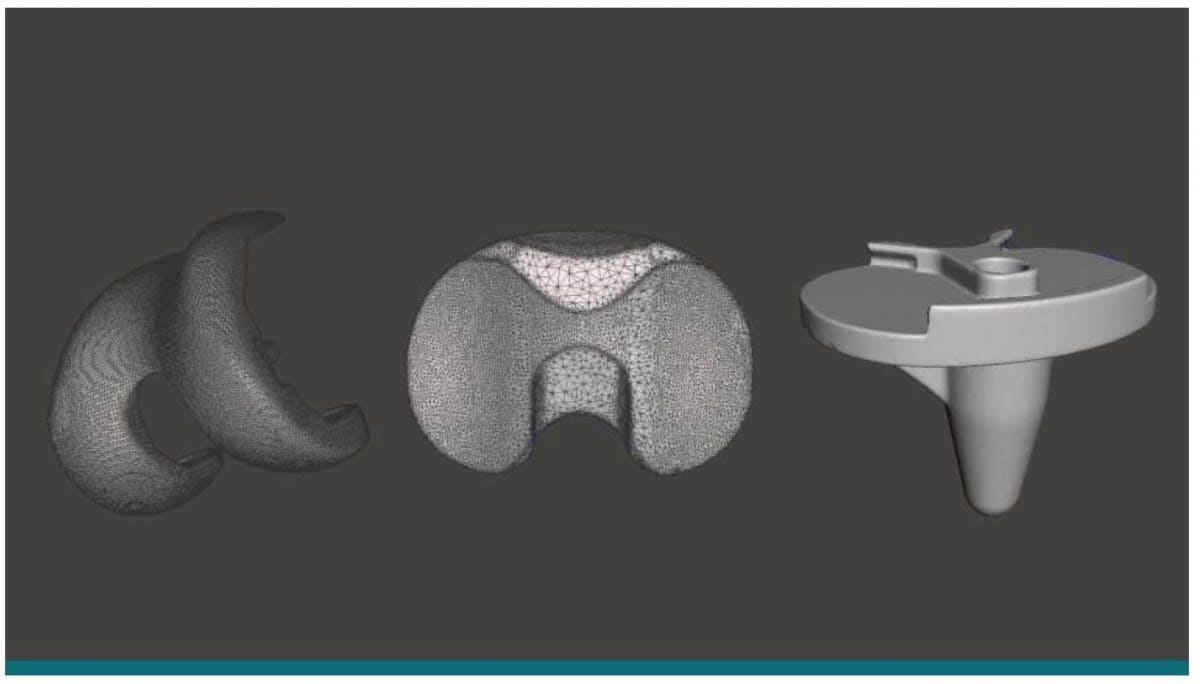 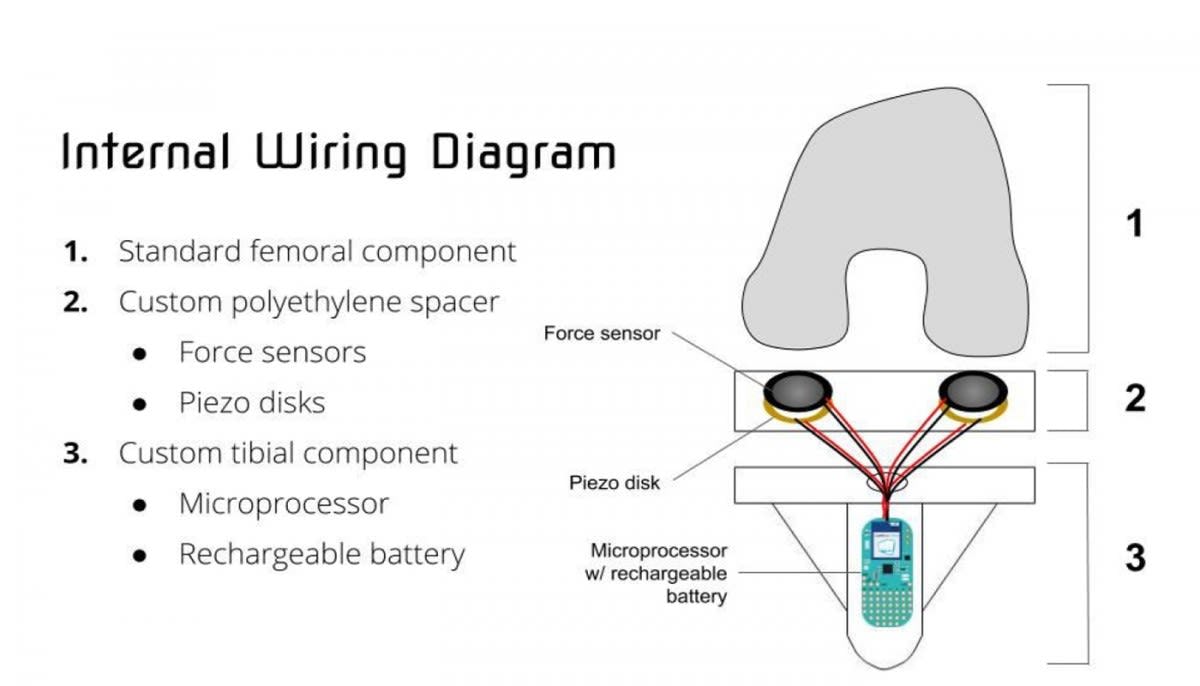 The team also developed the framework for a knee replacement implant with an embedded sensor system and companion application which encourages patient proactivity and provides insightful historical data for patients, surgeons, and physical therapists to make better decisions.

"The project is an exciting proof of concept for the feasibility of sensor-equipped implants that facilitates real-time streaming of data, as well as advanced data analytics to enhance the decision making of caregivers," explains Stevens professor Eirik Hole, who advised the team. 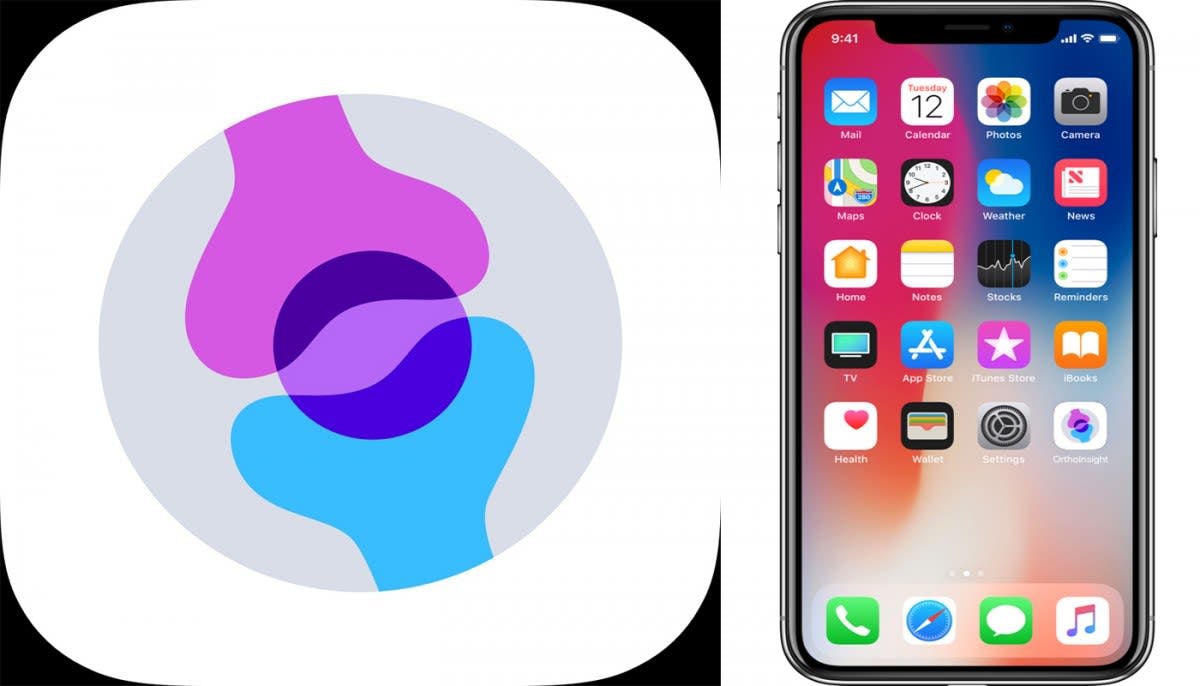 A "Check Engine Light" for the Knee

The number one cause of knee replacement revision is mechanical loosening of the implant, which may not be noticeable over the short term.

To illustrate, the team explains that low tire air pressure in a car driven just around the block, is not noticeable. But if this same car is driven cross-country, eventually, the low pressure in the tires can cause serious problems–a blown tire, and perhaps even an accident.

The OrthoInsight system is designed to detect this trend before it is too late. It is like the "check engine light" of knee replacements to enable preventative maintenance rather than full-on second surgery, according to the team. And with historical data, OrthoInsight may be able to help surgeons improve their surgeries and physical therapists design better physical therapy regimens.

"It’s not every day that you get an opportunity to work on something that has the potential to significantly impact the lives of people, and to do so in a truly entrepreneurial and creative manner that is encouraged by the IDEaS program," says Serowik, who together with Selim, will be working full-time at Johnson & Johnson in their two-year rotational Information Technology Leadership Development Program (ITLDP).

As for the rest of the team, D'Amico is applying to graduate school programs to pursue a Doctor of Physical Therapy. Mottole will be working full-time at Pfizer in their two-year Business and Technology rotational program. And Hipschman will pursue a career in the product management field.

While they are pursuing distinct career paths, the team plans on staying connected.

"If possible, we would love to continue our relationship regarding this product," says Hipschman.

The team will present a prototype demonstrating the sensor technology and 3D-printed model of the total knee implant at the Stevens Innovation Expo. 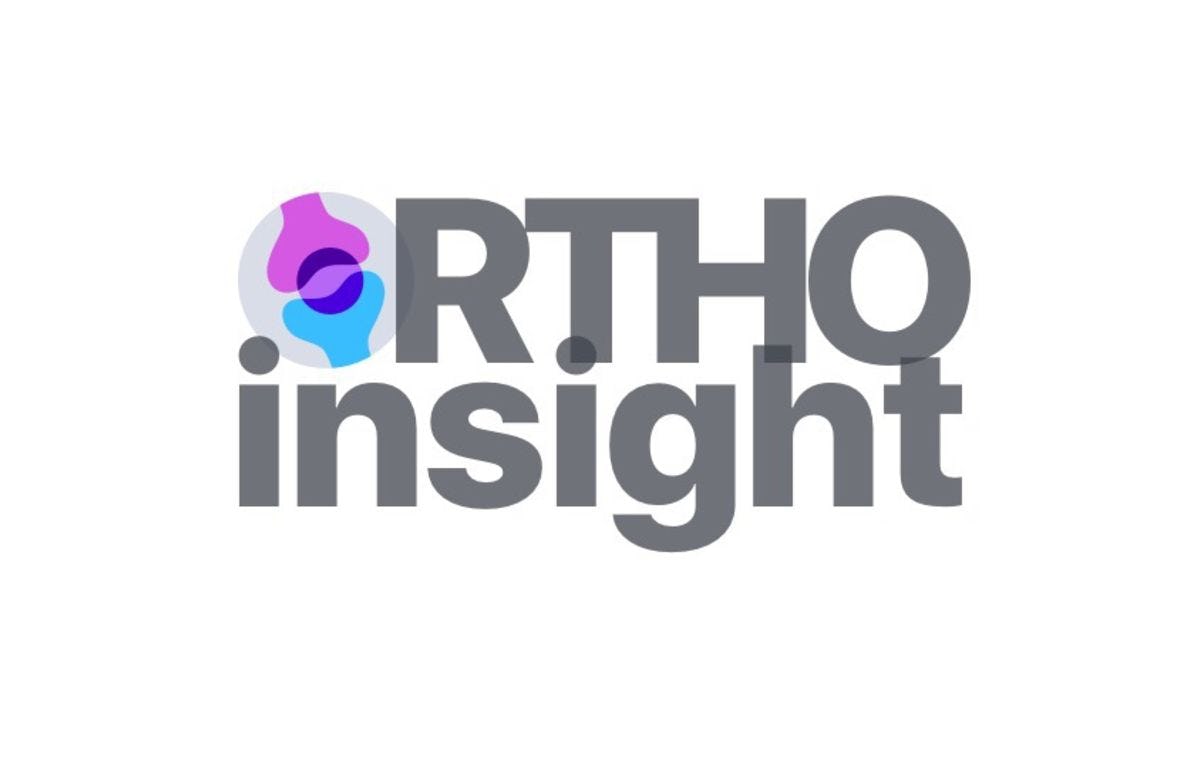