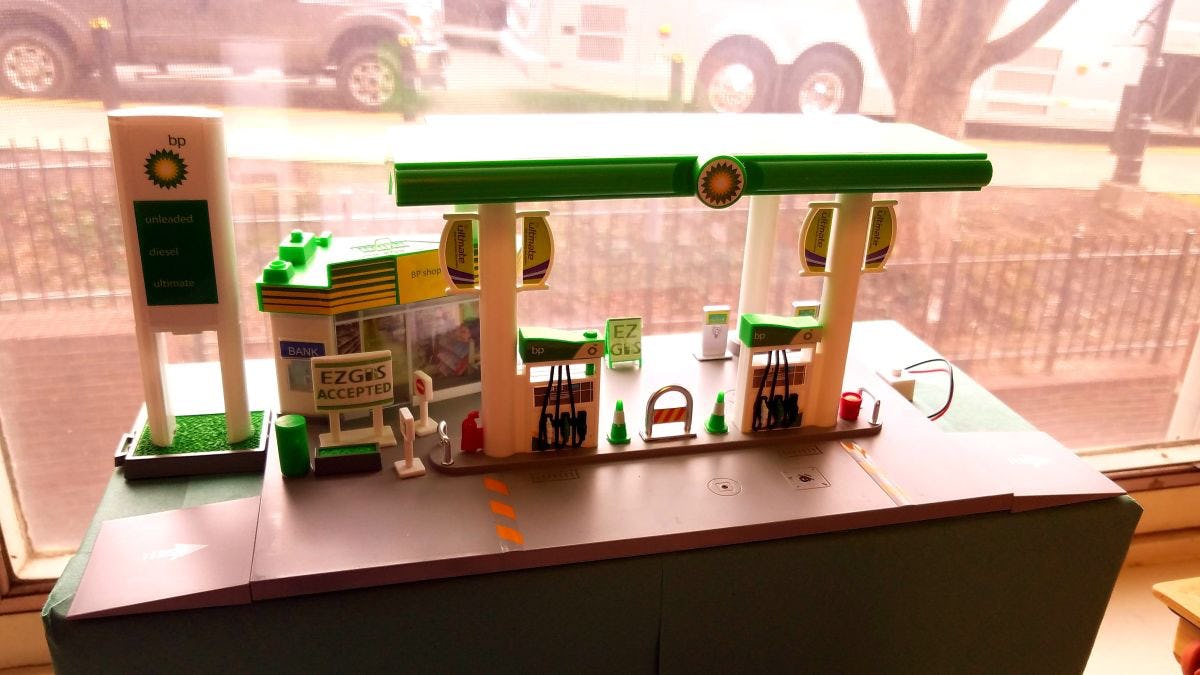 A display model of an EZGas station

Gas stations are notorious hotspots for identity thieves who use skimmers — small scanners placed over existing credit card scanners to "skim" information – to steal the card information of customers who pay for gas using debit or credit cards.

Banks and oil companies are working to develop more advanced anti-skimming equipment, but criminals are working just as hard to stay ahead.

In an ideal world, motorists would carry around enough cash to fill up their tanks, but as society moves towards an increasingly cashless economy, that might not be a practical long-term solution.

Enter EZGas, a secure payment method devised by a senior design team at Stevens Institute of Technology that makes it nearly impossible to steal any bank information from the user. The public will have an opportunity to learn more about the senior design project next month. EZGas will be on display at the annual Stevens Innovation Expo showcase May 3.

“Credit card theft is really prevalent at gas stations. In our research, we learned that an estimated $2 billion was lost at gas stations in 2015. EZGas reduces the risk of identity theft because you don’t have to hand over your credit card. The payment happens automatically,” said Daniel Wojciehowski, a computer engineering major at Stevens.

As the name suggests, it works like an E-ZPass, the electronic toll collection system used on toll roads, bridges and tunnels nationwide. Much like the E-ZPass transponders that millions of drivers have on the inside of their cars’ windshields, EZGas is a battery-operated, radio frequency identification (RFID) unit that transmits radio signals. Stored in this RFID device is an identification number that would be transmitted to a central database of account information whenever cars with EZGas tags drive up to a member gas station connected to that central database.

“We have a scanner program that connects to the RFID reader, and it can scan your tag and automatically deduct whatever cost you put in from an account based on that tag. What we’re still working on is creating a website to handle account management, such as setting up an account and adding funds,” explained Wojciehowski, who helped create the database and website for the project.

Unlike E-ZPass, a government-operated service aimed at efficiency and reducing traffic congestion, the main objective of EZGas is security. Distinguished Service Professor Bryan Ackland, who served as faculty advisor for the team, says the team was well aware of earlier RFID gas purchase technologies that had been put in place by major oil companies, and the flaws that doomed those technologies.

“Those had failed because of a lack of convenience for the user and, more importantly, a lack of security. As a result, the team put a huge emphasis on security. Their combination of secure data transmissions, user cell phone verification and GPS checking makes for a system that is easy to use and difficult to hack,” said Ackland, who was impressed by the team’s enthusiasm and camaraderie in developing the system.

“They developed a great solution and had a whole lot of fun doing it.”

Team member Tyler Shiling, who first came up with the idea for the project while sitting in his car at a gas station, acknowledged the constraints that such a concept has in terms of real world testing.

“Right now, a lot of our project is proof of concept. It would be hard to reach out to a gas station and ask if we could hook up our device and disrupt business for a day,” said Shiling, who added that the team is using a local area network (LAN) for testing.

“In a real-world application, we would connect to the central database over the internet. Also, when we’re testing a transaction amount with an account, we’ll come up with an amount ourselves. If this were to become an actual product or service, the final amount would be determined at the gas pump,” said Shiling.

Visitors at Innovation Expo will have an opportunity to learn more about EZGas. As the team continues to resolve a few minor details, Shiling says they are in “pretty good shape heading into the Expo,” and will be ready to demonstrate how the system works and answer detailed questions.