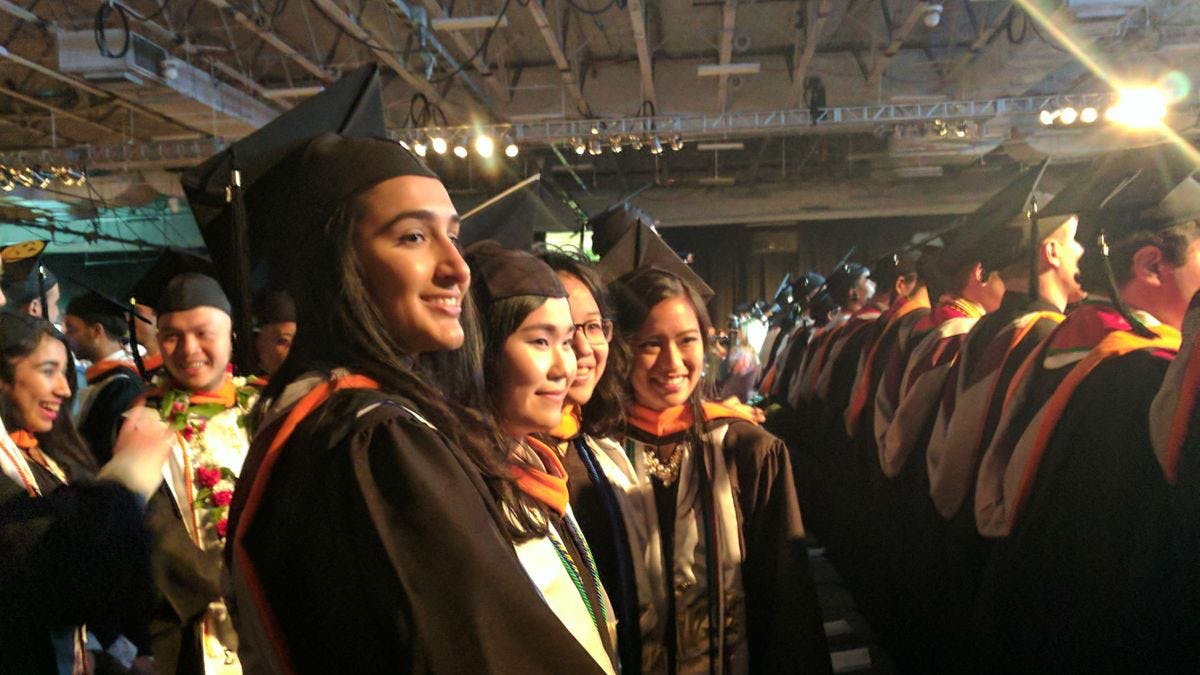 Stevens Institute of Technology commemorated the graduation of more than 2,100 undergraduate and graduate students, the largest in the university’s history, at the Meadowlands Expo Center in Secaucus, New Jersey May 24, 2017 with two celebratory ceremonies that were filled with Stevens pride and tradition, and attended by approximately 7,000 family members, friends and invited guests. 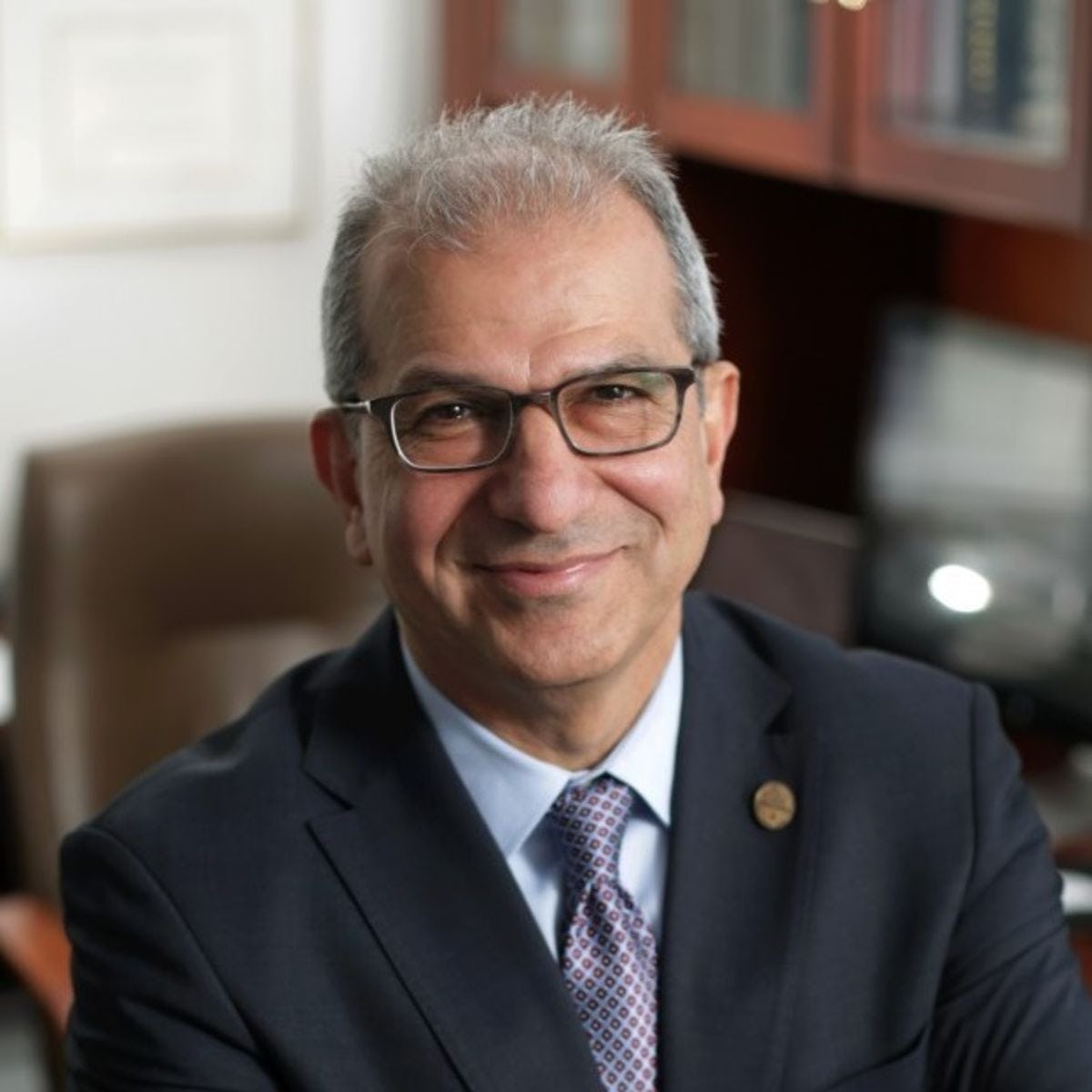 The milestone day began with the graduate Commencement ceremony in the morning. After Monsignor Robert Meyer, pastor at The Catholic Community of Saints Peter & Paul in Hoboken, delivered the invocation, Stevens President Nariman Farvardin offered his congratulatory remarks to the more than 1,500 graduate students receiving master’s and doctoral degrees on their remarkable achievements, as well as to the parents, family members, friends and faculty who were instrumental to their successes.

He then introduced the graduate Commencement speaker Dr. Jean Zu, the “newest member of the Stevens family.”

Zu, the newly appointed dean of the Schaefer School of Engineering and Science, began her appointment May 1.

Her address to the Class of 2017 centered on overcoming challenges in pursuit of one’s dreams.

A native of China who traveled to Canada in the 1980s to earn a Ph.D. at the University of Manitoba, she detailed her early struggles as a newly arrived international student with just $40 in her pocket.

She recounted how her dream of becoming a teacher evolved over the course of her life as her ambitions became bolder. 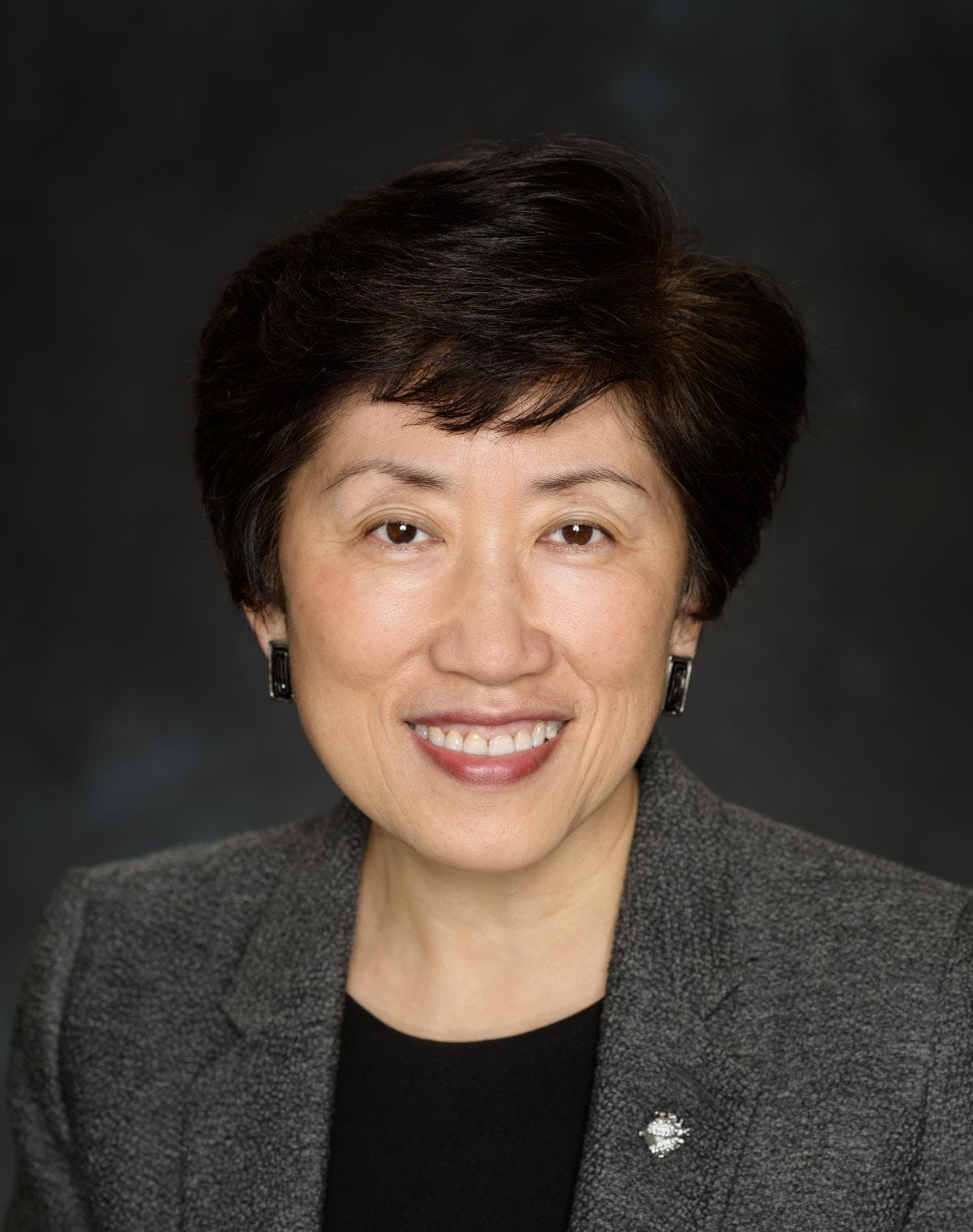 She struggled mightily as a Ph.D. student and would have given up her dream of teaching at a North American university if not for the strong support of her family and friends, she revealed. She says that the painful period in her life made her a stronger and better person, as she urged graduates to “dare to dream” and to embrace the hardships and setbacks that come in pursuit of their goals.

“Persistence and perseverance will reward you eventually.”

The graduate commencement ceremony featured the award of an honorary master of engineering degree to a “beloved member of the Stevens family” – Dr. Edward Stohr, an information systems professor and program coordinator for the Master of Science in Business and Intelligence and Analytics program at the School of Business at Stevens. Describing Stohr’s “profound” contributions to the development and growth of the School of Business, President Farvardin cited Stohr’s leadership role in proposing the school’s MBA and MBI&A programs, and in the school’s successful effort to achieve accreditation from the AACSB, the most prestigious accrediting body of business schools. 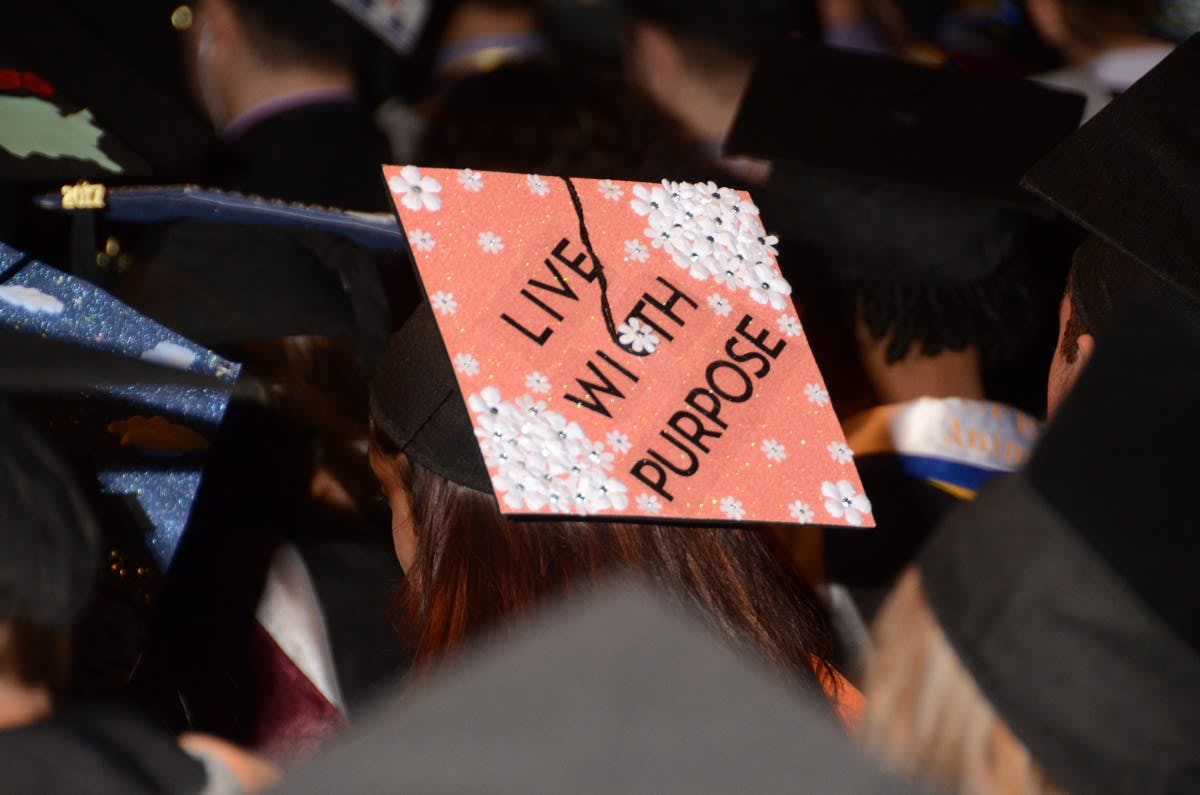 Later in the day, the Expo Center was again a sea of Stevens red and gray. Beaming with pride, family members, friends and well-wishers gathered for the undergraduate Commencement ceremony, exuberantly applauding the more than 600 undergraduate students receiving bachelor of arts, bachelor of science and bachelor of engineering degrees as they were led into the hall by the Faculty Marshal, Dr. Michael Steinmann.

President Farvardin introduced this year’s undergraduate Commencement speaker and recipient of the honorary doctor of engineering degree as a distinguished statesman in the great tradition of ship classification societies. Christopher Wiernicki, chairman, president and CEO of the American Bureau of Shipping (ABS), is an accomplished naval architect and business leader who leads one of the world’s foremost ship classification societies.

A familiar figure at Stevens, Wiernicki spoke at the dedication of the ABS Engineering Center last November, and his affection for Stevens shined throughout his speech as he chronicled the long-lasting relationship between ABS and Stevens.

“Both organizations were formed in the mid-19th century and forged reputations for technological innovation and leadership. Today both organizations hold true to [that] initial purpose, but have taken [that] reach globally,” he said.

That special relationship, he added, continues to be strengthened by the many Stevens alumni who work for ABS in locations around the world.

“Each in their own way has helped make ABS the organization that it is today, a recognized international engineering leader in the marine, shipping and offshore industries.” 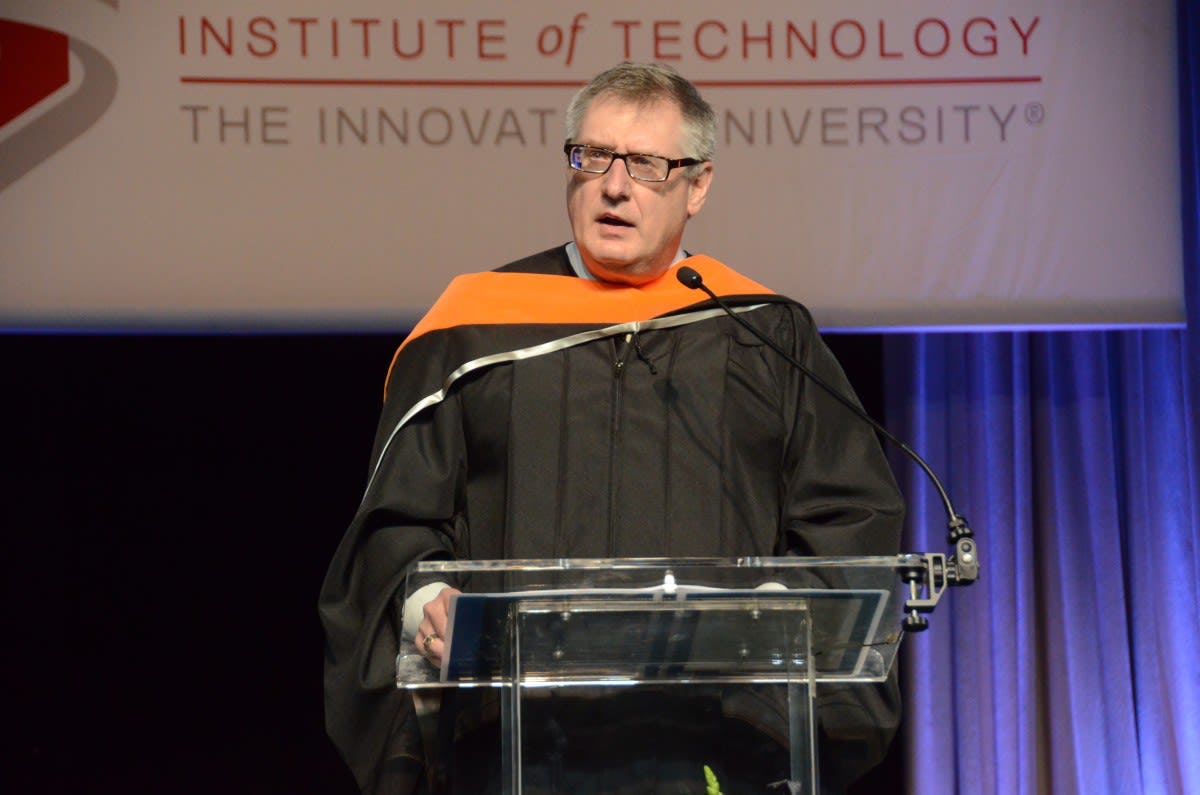 He spoke poignantly about his late father, John, who passed on to him lessons in leadership born out of tragedy and heartbreak. John, he revealed, was a Holocaust survivor who was sent to the Auschwitz concentration camp at age 18.

“His life is a story of a commitment to treat every person with dignity and respect, something that was ripped away from him during the dark days of World War II,” he said. “Leadership is about valuing relationships and connecting with people.”

It was a message Wiernicki, a father of three, delivered to an audience of students who grew up with smartphones, Google and Facebook.

“Behind every smartphone is a person, someone with feelings, emotions, dreams and desires. Over the years, technologies have changed and will continue to change, but never forget these technologies are useless without people.”

Appearing at his first Stevens Commencement in his role as provost and vice president for academic affairs, Dr. Christophe Pierre offered his congratulatory remarks to the Class of 2017.

Mark Liotta, Alexandra Masciana and Sara Vitkus, the three undergraduates who are First in Class this year with perfect 4.0 grade point averages, offered their own words of advice to their fellow graduates. Chatham, New Jersey native Liotta, a biomedical engineering major, will attend Rutgers New Jersey Medical School. He told his colleagues that with their Stevens education they have the talent and skills to succeed.

“Follow your dreams and don’t let anyone tell you it’s not possible, but also be flexible enough to adapt to an ever-evolving world,” he advised.

Masciana, a business and technology major from Middletown, New Jersey, will begin her career as a technology advisor for global financial services firm EY. She repeated the advice given to her and future Stevens students by President Farvardin four years ago at Accepted Students Day: “Plant more flowers than you pick.”

“Those six words were the driving force behind every choice and every action that I made at Stevens: to give to others more than I take from others,” she said, urging her classmates to follow President Farvardin’s advice.

Sara Vitkus of Loudoun County, Virginia, who graduates with a bachelor’s in computer engineering and a master’s in systems engineering, will begin her career as a systems engineer at Entegra Systems, a provider of technical and professional services for federal government clients. An accomplished equestrian, Vitkus says being around horses her whole life taught her to embrace challenge and failure.

Final thoughts from the President

President Farvardin returned to the podium one last time to remind students that their Stevens education prepared them for extraordinary career success, as their predecessors have demonstrated. They follow in the footsteps of luminary alumni such as artist Alexander Calder ’19; Mark Crispin ’77, inventor of the IMAP; Nate Davis  ’76, former CEO of XM Satellite Radio; and NASA pioneer Aaron Cohen ’58, he added.

Lastly, President Farvardin told graduates that their Stevens educations have prepared them with unique and distinctive capabilities that differentiate them from the many thousands of students celebrating commencement this year.

“You have been immersed in technology in all aspects of your education. Whether you’re a computer science, mechanical engineering or music and technology major, your deep exposure to technology gives you a perspective and an expertise that sets you apart from graduates from other universities.”