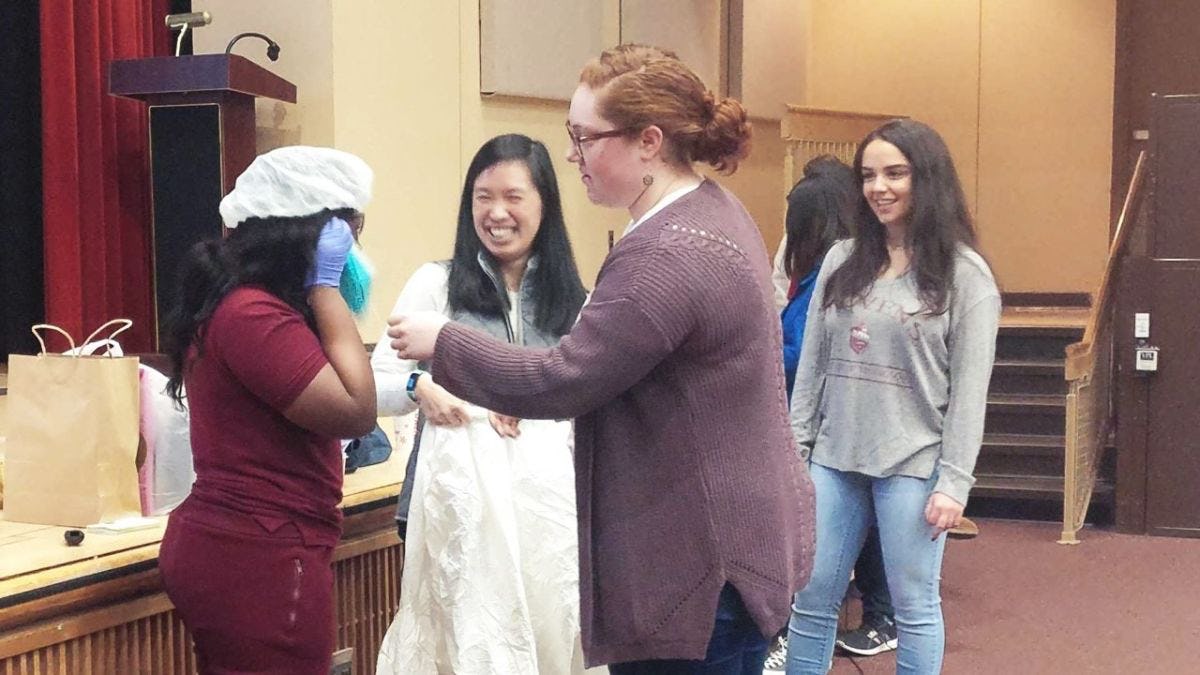 This month, Stevens Institute of Technology hosted its fifth annual Introduce a Girl to Engineering! Day event at Brensinger Elementary School in Jersey City. Throughout February, we’re also sharing the stories of some of our female faculty members and students, and how they are critical to our mission to inspire, nurture, and educate leaders in tomorrow's technology-centric environment while contributing to the solution of the most challenging problems of our time. 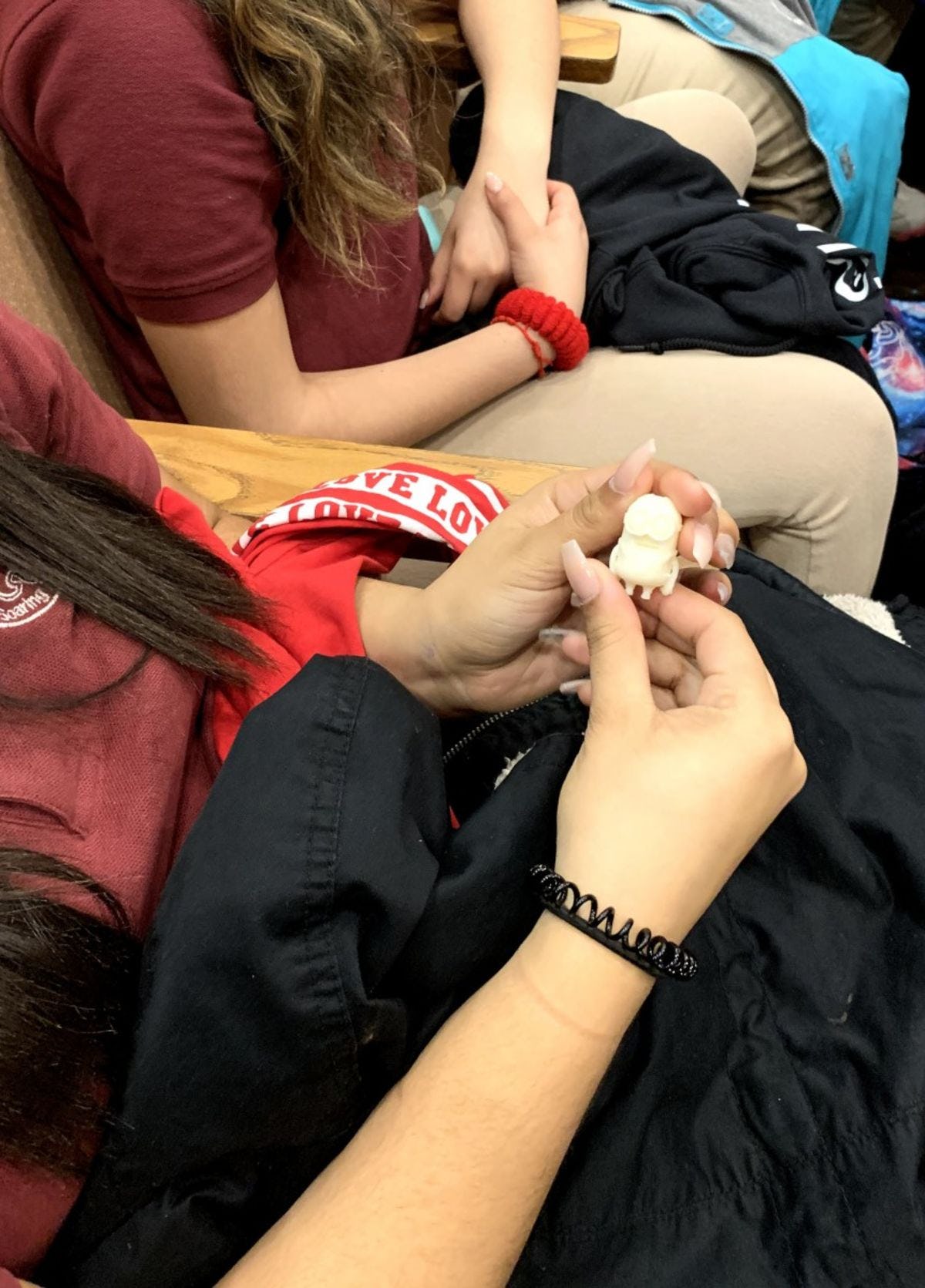 The important role of female mentors throughout a young girl’s life and education should not be underestimated.

While many of the students seemed to already have a grasp on the idea that there tend to be more males going into engineering fields than females, the reality of the gender gap in engineering sank in when a Stevens student volunteer explained that only about 30 percent of engineering students at Stevens are female—compared to 20 percent of undergraduate engineering degrees awarded to women nationwide, making Stevens’ undergraduate female engineering population about ten percent higher than the national average.

“You could see shock on a lot of the girls’ faces,” Lee said. “I don’t think they realized that the discrepancy was so large.”

“We need to start earlier to introduce girls to engineering, because they’re set on the path early,” Fontaine said. “If they’re discouraged from math and science, it’s hard to build the skills that they need to go into an engineering field. Showing them female role models at a young age leaves an impression.”

This is why Fontaine and Lee are eager for this opportunity to bring awareness of the possibilities of engineering to so many young girls at Brensinger. The two Stevens professors were also joined by five Stevens student volunteers: Emily Sneddon, Jessica Persaud, and Dongrun (Sally) Ju in chemical engineering and materials science; and MariaCristina Todaro and Alyaa Elkhafif in mechanical engineering.

“As educators, we are responsible for cultivating and inspiring interest in our students. This responsibility includes celebrating women's achievements in STEM (science, technology, engineering, and math),” said STEM-focused assistant principal and Stevens alumna Janeen Maniscalco. “By providing our girls with a comfortable setting, they get to ask Stevens engineers questions about their journey without fear.”

Lee brought demos that made the event even more engaging, providing students with hands-on interactive activities. One particularly fun moment was when Lee asked for a volunteer to try out her cleanroom suit—clothing worn in a room designed to minimize contamination. 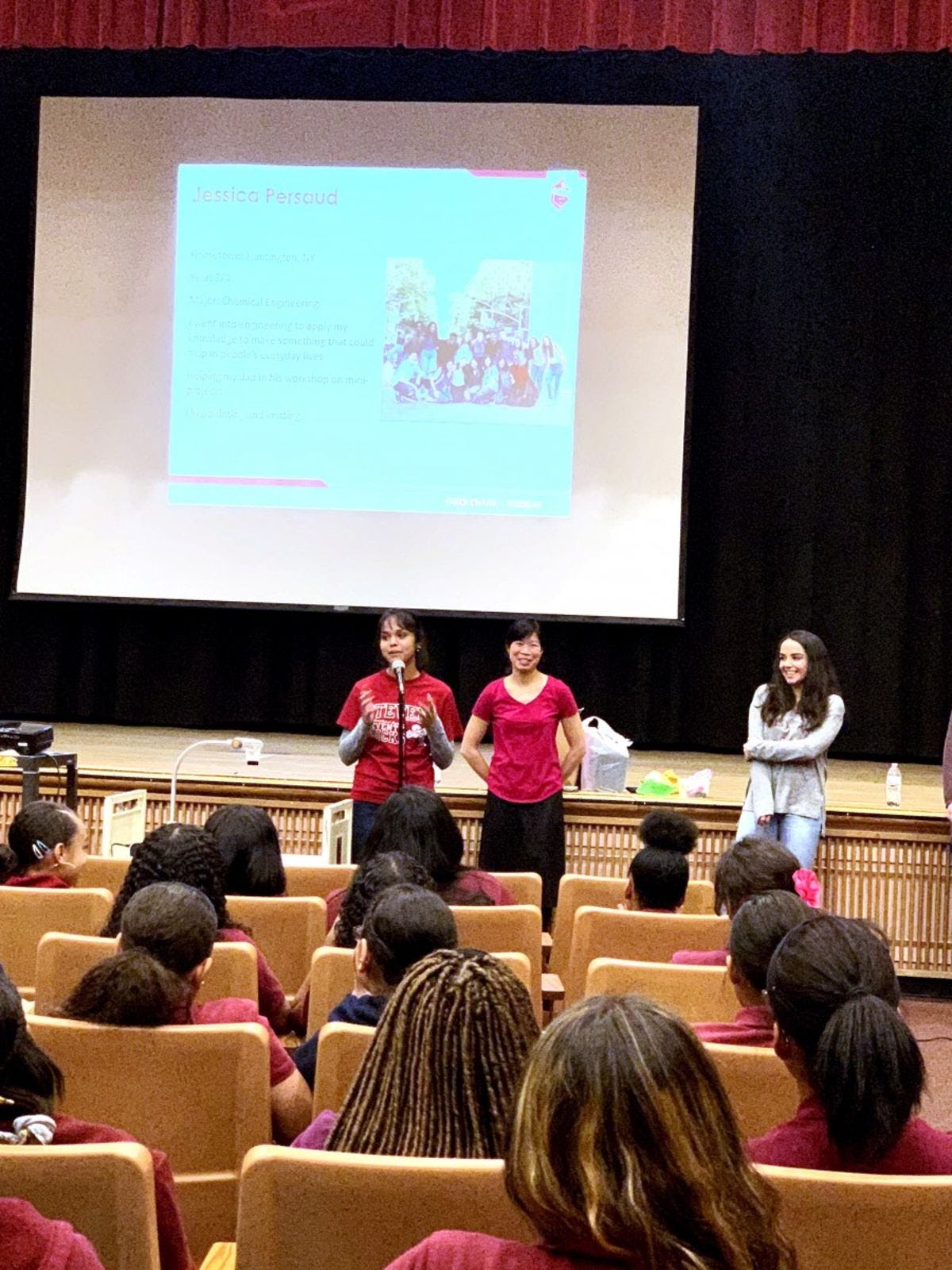 “She didn’t know what she was volunteering for at first,” Lee said with a laugh. “So we put it on piece-by-piece. We had booties and gloves and a face mask. I was showing them what I used to look like when I went to grad school. I talked to them about electronics and how they need to be made in really clean environments.”

Lee also passed around some samples of thermoplastic, a material that melts when heated. “It becomes a very viscous kind of gel, so you can stretch it and deform it,” she said. “When it cools back down it’ll solidify and harden in whatever shape that you molded it into.”

The importance of female mentors and role models

Female mentorship is one critical aspect of building a young girl’s awareness of her future opportunities. Because there has been a gender gap in engineering throughout history, girls don’t receive as many chances to see themselves reflected in their adult mentors. Any opportunity for girls to see successful women in engineering roles is valuable.

“When we went to school, all the professors were men,” Fontaine said. “It’s very male-dominated, so you don’t see yourself as a professor.”

Stevens student volunteer MariaCristina Todaro said, “I didn’t have any female STEM role models. I am a first-generation college student. I decided to go into engineering because, even though I knew it would be a difficult path to take, I would have unlimited opportunities upon graduation.”

That’s one of the reasons why Todaro is so passionate about participating in outreach programs. “Events like these are important to inspire young women to not be afraid to try whatever they want to accomplish,” Todaro said. “Even if it is not in a STEM-related industry, seeing women who pursued their dreams always boosts their confidence [in their ability] to accomplish their own goals.”

Lee agrees that events like this are impactful, because they give young girls the opportunity to see women demonstrating ambitious career paths. This helps them envision themselves doing something similar in the future.

“I didn’t have many women role models who were professors, so I just didn’t envision it as something that was a possibility for me,” Lee said. “It’s really important for girls to know their options and to evaluate the biases that society might place on them, saying girls can’t do certain things or aren’t as good at certain things. That has been a really big part of why I do outreach as a professor. I was so close to missing my calling. That’s a little scary to think about.”

Despite the gender disparities of the past and present, the current generation is taking up the torch for a future generations of girls. “The most memorable part of the event was when two young girls came up to me to ask for some advice about a sustainable chair they were making,” Todaro said. “It was heartwarming to see these young women look to me for advice after sharing projects I’ve worked on at Stevens. It was inspiring to see them look up to me in this way.”

Introduce a Girl to Engineering! Day aims to demystify engineering. The word “engineering” itself can be abstract, with many people not understanding how many diverse career options fall beneath the engineering umbrella.

“Hopefully we also broadened their perspective on what engineering is,” Fontaine said. “I think the common misconception is that engineers are scientists in a lab, or they’re in a hardhat doing construction. The field is actually so diverse and varied - engineering is everywhere!”

“In general there isn’t a lot of focus on what other occupations and roles and industries you can go into afterward,” Lee said. “Even just being aware that there is such a variety of things out there that you can do with an engineering degree can plant a seed in the backs of their minds.”

Learn more about engineering at Stevens: