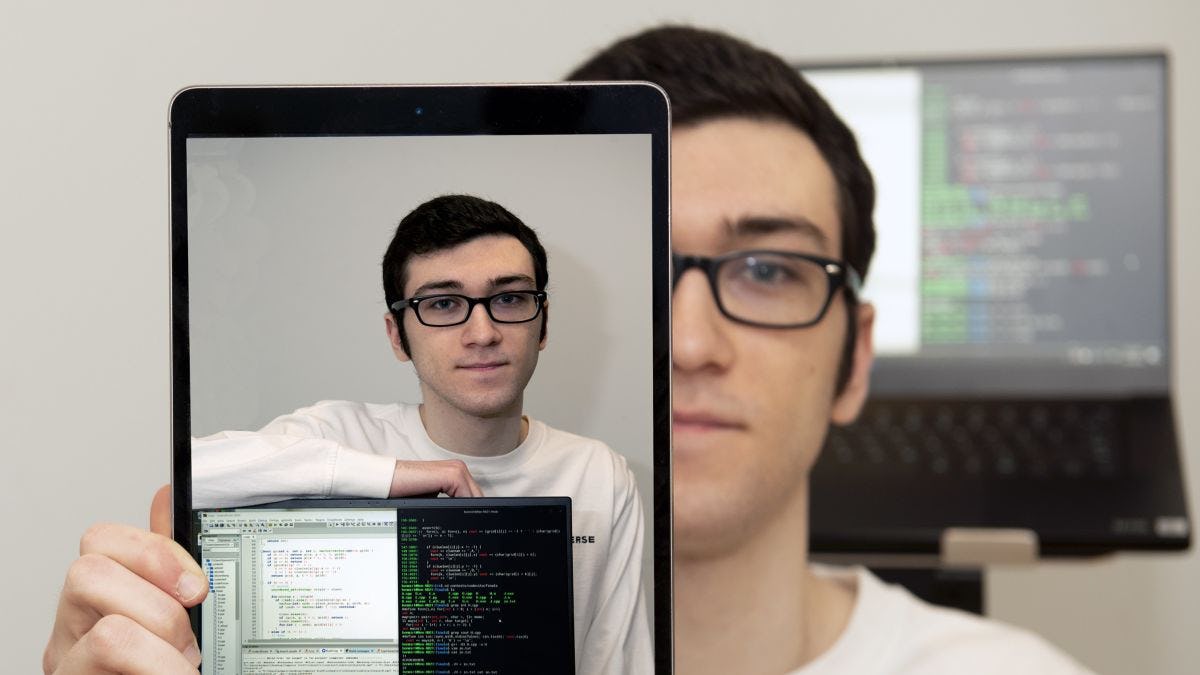 A Stevens student has won the largest coding competition in history.

Ben Mirtchouk '21, a recent computer science graduate who will continue in the department's master's program this summer and enter the financial industry in fall, topped more than 136,000 participants from 34 nations in the global TCS CodeVita coding challenge in May to take home the $10,000 first prize. He is the first-ever U.S. winner of the competition.

Persisting through a pandemic

He didn't have to look far for the perfect college destination.

"It was pretty interesting to join a school where the three of us, even though we are not all close in age, are all studying at the same place at the same time," explains Ben. "That has been really great."

Although his Stevens academic experience was heavily impacted by the COVID-19 global pandemic — he spent just two semesters residing on campus — Mirtchouk did attempt to form a new coding competition club with friends on campus, until state restrictions forced Stevens to go virtual and derailed the effort.

He is especially appreciative of those Stevens faculty who advised him as he moved through a pandemic-influenced undergraduate education.

"My last two semesters, including senior design, were completely virtual, but I think the professors were able to adapt and make everything as good as it possibly could be," Mirtchouk explains. "Of course we all wanted to be in the classroom. But they did really well under the circumstances."

Computer science department faculty also guided Mirtchouk as he mapped out his education.

"They helped me to, for instance, not overlap my courses and studies with things I had already done or already knew when I arrived," he says. "I probably exchanged hundreds of emails with professors [Dominic] Duggan, [Giuseppe] Ateniese, [Eduardo] Bonelli and [Brian] Borowski about which classes to take or substitute, asking for suggestions. I could not have done this without their support."

Six intense hours of coding, against the clock

Mirtchouk first heard about the TCS CodeVita challenge (which has operated for nine years) in October 2020, when one of its organizers reached out to him directly via the Handshake career-services platform.

"They said it was free to enter, with a crazy prize pool," he recalls. "I have always been interested in competitive programming so I felt I might as well give it a shot."

For six intense hours, competitors worked virtually on a wide variety of real-world coding problems such as writing a new program to optimize construction of a hotel (utilizing variables such as room size, construction cost and room revenue) and creating a valid crossword puzzle of an assigned grid size from a given dictionary of words.

"The rules were simple: use whatever language you like, but get the answer right and do it as efficiently as possible," notes Mirtchouk.

Moving methodically through the question sets, using C++ and Python as his languages of choice — and receiving near-instant scoring feedback after completing each challenge — Mirtchouk emerged victorious in the end, nosing out second- and third-place university students from Switzerland and Australia, respectively, in the process.

"Some of the harder questions definitely gave me a run for my money during this challenge," admits Mirtchouk. "They were very challenging but also very interesting, and it is always gratifying to solve a really difficult question."

"Often coding is a matter of coming up with the correct approach to a problem that may be more intricate than it seems at first."

Now he will move on to a new challenge. After beginning his accelerated Stevens master's in computer science this summer, Mirtchouk will join the financial media and technology powerhouse Bloomberg in September as a software engineer.

It’s the logical next step on a journey that included two prior internships with the company along the way.

"I have made ample use of Stevens' Career Center," he concludes appreciatively, reflecting upon his undergraduate years at Stevens. "They provided me with meaningful connections through various events, and also looked over my resume."

"All in all, it has been a really positive experience being at Stevens."