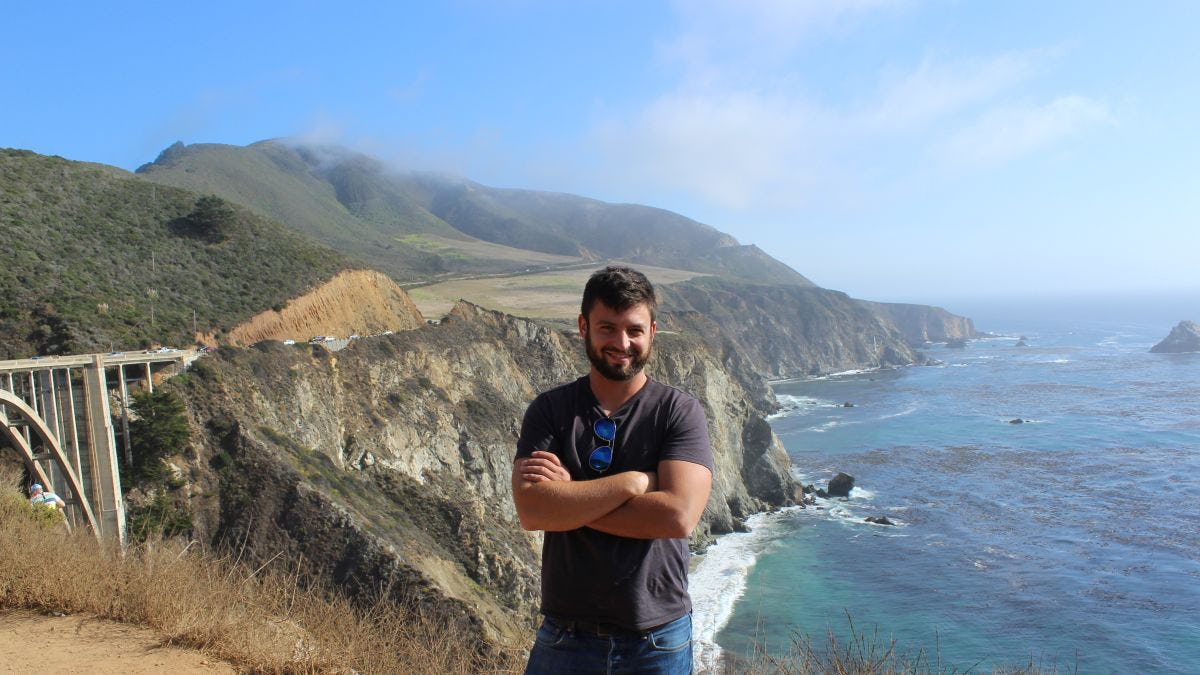 Brian Donohue ’11 takes advantage of California’s Central Coast on Highway 1 in Big Sur. The Pinterest engineer was recently named to Forbes 2017 "30 Under 30" list.

Brian Donohue ’11 keeps good company. Recently named to Forbes' 2017 “30 Under 30: Media” list, the Jersey native has several friends who also made “the list” in their respective fields. “There are also several people that I ‘know’ from the Internet, including one of my favorite writers, who was recognized in the media category,” Donohue says. “It’s great to be recognized alongside so many other people that I know and respect.”

The recent Stevens grad is the former CEO of Instapaper and helped facilitate the bookmarking app’s sale to Pinterest, a web and mobile content sharing service, in August. The decision, he says, wasn’t an easy one, citing a trend in consumer software where large companies buy smaller companies and shut them down.

“That’s not the case here — and if we thought it was, we probably wouldn’t have gone through with it,” he says. He even personally responded to many concerned users who posted on the Instapaper blog, some not very kindly.

“When you’re one of only a few people building a product and communicating with a community, it’s important to provide a personal touch and take some responsibility,” he says. Along with the sale came a new position for Donohue as a product engineer at Pinterest’s headquarters in San Francisco.

“When I was CEO, I had free rein to come up with ideas and the power to develop them. But when you’re at a company with a thousand-plus people, you have to acquiesce these responsibilities,” he says. “At Pinterest, I am using aggregate data from Instapaper to help power recommendations for article pins in Pinterest. I’m also finding ways to apply some of the core technology behind Instapaper — for example, our article parser — directly within Pinterest.”

Citing hard work and luck for his opportunities and subsequent success, he also gives a nod to his alma mater for laying a solid foundation.

“Well, clearly my education helped,” he says with a laugh. “Two things I learned at Stevens — how to solve problems and how to learn. I was given the right tools, and that has been extremely valuable.”

After graduating with a degree in computer science, Donohue made the decision to start his own company and jumped right in, securing $250,000 in angel investor money. The product didn’t take off, but he learned how to manage a business and a team. He took those skills to betaworks, a New York-based startup studio that owned Instapaper at the time, where he was quickly promoted to general manager of the app. He then helped change Instapaper’s payment structure from an entirely paid service to freemium (a business model where basic services are free and premium services are paid), became the CEO of the company and eventually guided the acquisition to Pinterest.

Now located in the hub of consumer technology, Donohue continues to look to his professional future.

“[The Forbes] recognition is nice in terms of my career accomplishments to date, but I hope it’s just a small nod and that much larger achievements are on the horizon,” he says.