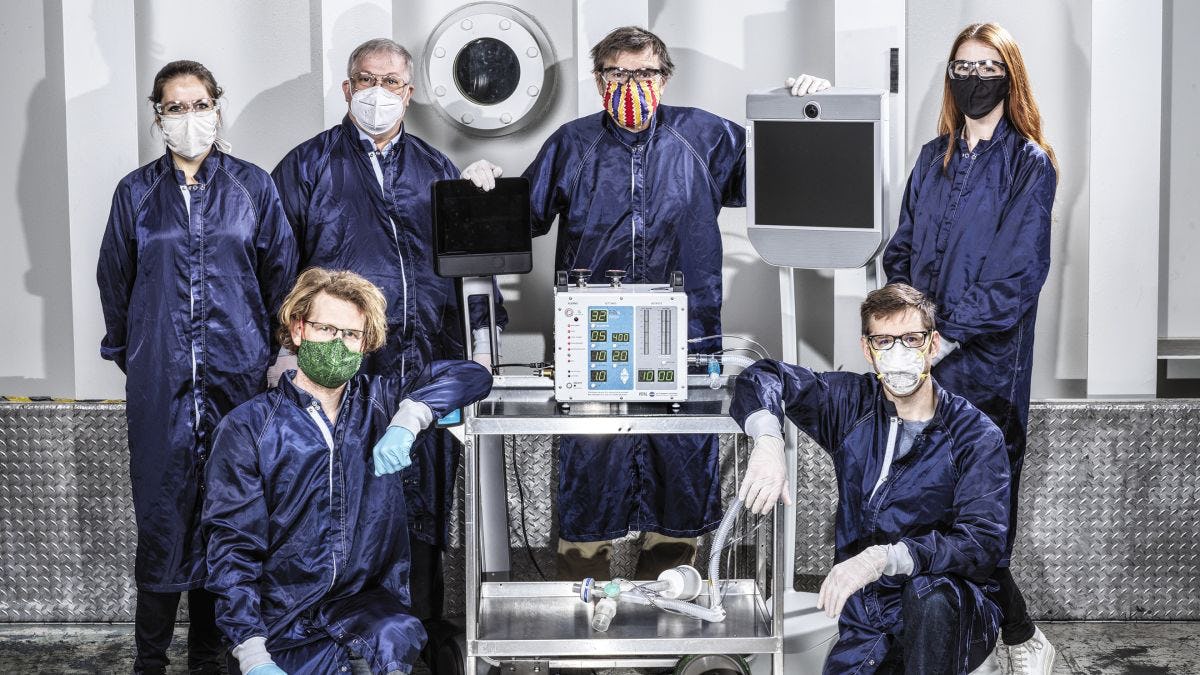 Mary Michelle Easter '15, standing at far right, and her team were some of the dozens of engineers at NASA's Jet Propulsion Laboratory involved in creating a ventilator prototype targeted to coronavirus disease patients. Photo: NASA/JPL-Caltech

When COVID-19 cases flooded the New York metropolitan area’s healthcare facilities this past spring at the peak of the coronavirus outbreak in that region, the dwindling supply of ventilators sparked a frantic national hunt for the life-saving devices.

The urgent demand prompted the world’s preeminent space agency — NASA — to deploy a team of engineers at the Jet Propulsion Laboratory (JPL), which is managed and operated by California Institute of Technology (Caltech) in Pasadena, California, to find a solution to what has become a global shortage.

“Everybody operated with the understanding that every second was critical — that we had to do everything we could and as fast as possible to get these designs out the door,” says Mary Michelle Easter ’15, a JPL mechatronics engineer who was part of that team.

Prototypes of the VITAL ventilator, designed and tested by NASA's Jet Propulsion Laboratory in just 37 days to address the needs of COVID-19 patients. Photo: NASA/JPL-Caltech

Requiring far fewer components than traditional ventilators, VITAL can be built faster. And its flexible design allows for it to be modified for use in high-capacity facilities that have been turned into field hospitals, like the one set up inside New York City’s Javits Center this past spring.

VITAL received FDA approval through an expedited process reserved for crisis situations and is now ready for production. Easter and her JPL colleagues are working with more than 20 licensees around the world to help manufacture the devices for COVID-19 patients in need.

“We’re making sure that they understand all the design documentation provided to them so they can get these things produced and out into actual hospitals,” Easter says.

Medical device manufacturing isn’t part of NASA’s charter, so designing a highly sophisticated apparatus like a ventilator was a significant departure from the daily work of spacecraft scientists like Easter.

Aided by NASA’s incomparable access to specialized experts and doctors, the team narrowed its focus toward creating a device specific to the needs of COVID patients, rather than replicating full-scale ventilators with broader capabilities.

“One of the experts we worked with was an oxygen compatibility analysis expert,” Easter cites as an example.

“He would take every component and subpart we were considering and provide an analysis and assessment of whether or not the device was safe and compatible.”

Additionally, the team had to be creative about the component parts that would be used to ensure that the new ventilator design would in no way interfere with the current production of traditional ventilators.

“We had to make sure that when licensees started mass-producing these ventilators they weren’t snatching up parts needed to build the full-scale ventilators. Also, we had to verify the supply chain the whole time we were designing to see if parts manufacturers were even capable of producing the quantities needed. If they couldn’t, we needed to move on to something else.”

To see how passionate people were to jump in and dedicate their time and brain power for the greater good was a humbling experience.
MARY MICHELLE EASTER ’15

As she looks back on the pace of the ventilator task, Easter is in awe of what the JPL team was able to achieve in just a little over a month.

“There were so many different elements of design, implementation and getting regulatory approval for mass production that had to be performed at the same time. None of us had medical device design backgrounds. But as we learned more and more what we needed to do, we found a lot of parallels and crossovers with what a lot of us do day to day in designing spacecraft.”

And while problem-solving is what Easter does every day, she says the driving influence of the coronavirus health crisis made the ventilator task fundamentally different from any other task she has ever worked on.

“If you were assigned to that task, it became a singular focus. To see how passionate people were to jump in and dedicate their time and brain power for the greater good was a humbling experience.”

Easter’s contributions on the COVID-19 ventilator task is a shining moment among many in a dream job that began five years ago after she graduated from Stevens with a bachelor’s degree in mechanical engineering.

She has designed ground support equipment used in testing spacecraft, served as lead mechanical engineer for a cube satellite project, TEMPEST-D, and delivered an impressive number of flight actuators — for use on two different Sentinel-6 satellites, as well as for various NASA missions (MAIA, SWOT and NISAR) seeking to study the earth’s surface and climate, as well as the effects of different types of air pollution on human health.

By the end of next year, Easter will have 14 different pieces of hardware up in space.

“I never could have imagined when I began how much I would learn and how much actual work I would be able to produce,” she says.

“I’ve been at JPL for five years and I still find myself learning a crazy amount of new things every day. And there is no plateau to what I can learn in that kind of environment. It’s just very rewarding and empowering.”

Learn more about Mary Michelle Easter '15 and her path to JPL.