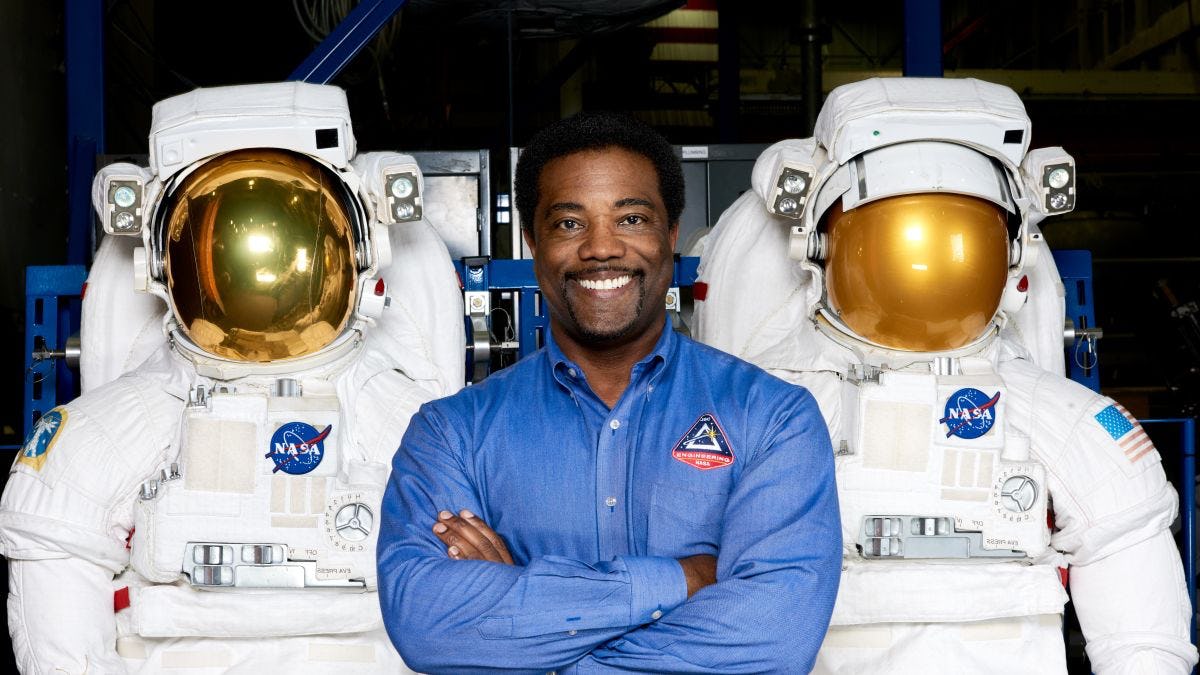 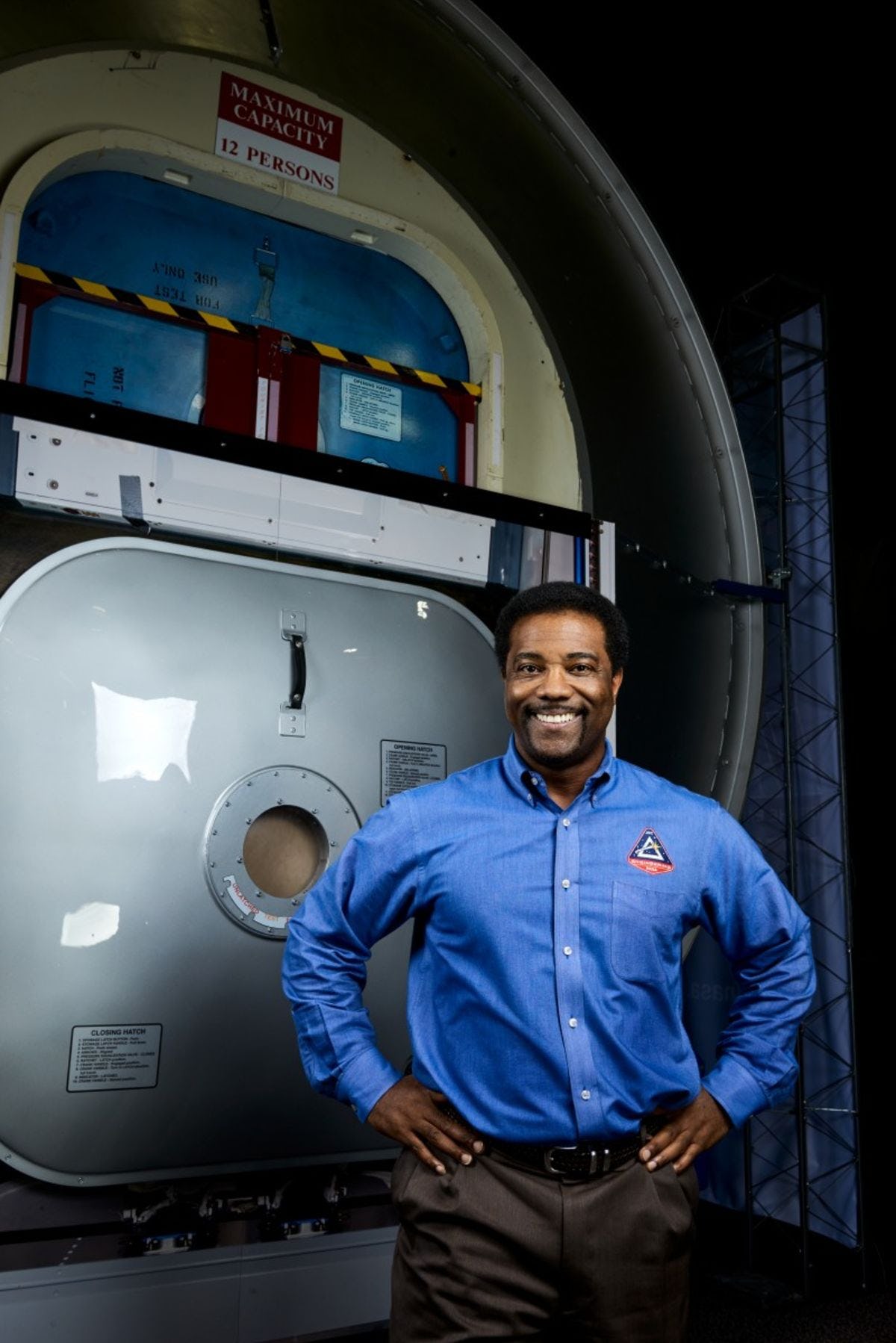 Watching a rocket launch for the first time from his family’s small, black and white TV is an enduring memory for Ron Cobbs M.Eng. ’12, NASA’s avionics and utilization (payloads) chief engineer for the International Space Station (ISS).

“Star Trek” also helped fire up his youthful imagination. In the fifth grade, he was introduced to the 1960s series by a classmate who came to school one day dressed as Spock.

The broad message of that iconic television program, along with the diversity of its cast, helped break down barriers in American society, Cobbs says.

“It came on at the time of the civil rights movement, and you had people from all different nationalities represented on that show. The message that it did not matter who you were and what you did as long as you were working toward the common goal really resonated with me.”

Cobbs’ decorated career at NASA’s Johnson Space Center (JSC) in Houston spans more than three decades. In 2014, he was awarded the Director’s Commendation Award, the highest honor given by the NASA-JSC administrator.

He credits his older sister, now a contractor at the Marshall Space Flight Center in Huntsville, Alabama, for paving the way for his career. She worked in the training division at NASA-JSC in the 1980s and would regularly send Cobbs, then in high school, training materials and pictures of astronauts that inspired him.

“Her connections and stellar performance helped open doors for me to work in NASA-JSC’s training division when I was a Tennessee State University co-op student. The hiring committee felt that good workers ran in the family,” Cobbs said.

After graduating with a bachelor’s in electrical engineering from TSU in 1989, he began full time at the space agency as a subsystem manager, assigned to the Space Station Freedom project, which was in development at the time. The cancelation of the Freedom program and its evolution into the ISS had a profound impact on Cobbs’ career. The ISS, a vast multination collaboration involving the U.S., Russia, Canada, Japan, and the participating countries of the European Space Agency, is the largest space station ever constructed and a research facility like no other.

The U.S. involvement in the ISS provided Cobbs an opportunity to move into NASA’s engineering department as a design engineer, creating avionics interface hardware for the new ISS.

“I loved it because that’s where the design work happened. My boss at the time said to me, ‘There’s nothing more satisfying than designing something, building it and seeing it work in space.’ And he was absolutely correct. I’ve been hooked ever since.”

After the space shuttle Columbia accident in 2003, the NASA-JSC Engineering Directorate made the decision to offer additional training for the engineers, and Stevens' graduate programs in space systems engineering were part of this initiative. Cobbs went on to earn both a graduate certificate and master's degree in this field, taking classes right onsite at Johnson.

He credits his Stevens education for helping him realize that he had been performing systems engineering at NASA all along.

“Systems engineering is the ability to understand a complex system — the subcomponents, the interfaces, and how they all interact with each other,” explained Cobbs.

“Here at Johnson Space Center, we design, develop, build and test complex systems that go into space to support human space flight. Systems engineering affects all aspects of each system.”

Cobbs’ career at NASA took off by leaps and bounds soon after getting his master’s degree. He moved up the ranks to a systems engineer position, and later rose to his current role as one of the chief engineers in the ISS Chief Engineer’s office.

“Getting my Stevens degree was big for my career. They started elevating and promoting me at NASA, and giving me bigger responsibilities and challenges.”

As the ISS Avionics & Utilization chief engineer, Cobbs is responsible for overseeing the engineering development, and tasks and operation of all electronic systems used on the space station.

Cobb’s expansive and integral role at NASA was evident in 2014 when he stepped in to assist a troubleshooting team that was investigating the cause of a space suit malfunction.

During an ISS spacewalk, water used to cool the suit had leaked into the astronaut’s helmet. Cobbs was not part of the official Extravehicular Mobility Unit (space suit) investigating team, but he was brought in as an electrical expert to help troubleshoot the problem. He discovered a software issue involving the spacesuit that subsequently led to identifying the problem and new procedures for the astronauts.

He modestly described his contributions as only a systems engineer would.

“I helped troubleshoot the connection between the laptop computer and the computer processor on the suit so that data from the suit could be read, which was just one part of a continued process in the investigation,” he explained.

A world view shaped by NASA

Working at NASA is more than a job for Cobbs. He represents the agency 24/7 wherever he goes, he says.

In fact, he is quite happy to engage with the public in order to bring awareness to NASA’s broad scope of work. From cancer research to the creation of memory foam mattresses, he wants more people to know that the research conducted in space is really for the benefit of life on earth.

“There are so many products that we use in our daily lives that are a result of NASA technology – the digital image sensors that let you take pictures from your cell phone, GPS, the cardiac pump. The list goes on and on. There are nearly 2,000 products and services that began as, or have benefited from, NASA technology.”

Cobbs’ exemplary career at NASA has been the source of tremendous pride for his parents.

“They taught me to believe in myself, have faith and shoot for the moon,” says Cobbs.

“My mother loves to brag about her son and has pictures of me all over her wall. My father passed away in 2014 but lived to see me become chief engineer.”

Cobbs’ current role requires frequent travel to NASA locations, primarily to the Jet Propulsion Laboratory in Pasadena, California, the Kennedy Space Center in Florida and the Marshall Space Flight Center, to deal with daily operations and all matters associated with the ISS. He says the engineer in him is itching to return to design.

“I’m looking to perhaps go back into development and building something from scratch, not necessarily as a design engineer, but as a chief engineer who is overseeing the development of a vehicle that’s going to Mars, or something of that nature. But I would always like to stay in engineering. That is where my heart is.”

As for experiencing space travel firsthand, Cobbs doesn’t even hesitate.

“Absolutely. If there is an extra seat, strap me in. I’m ready to go.”