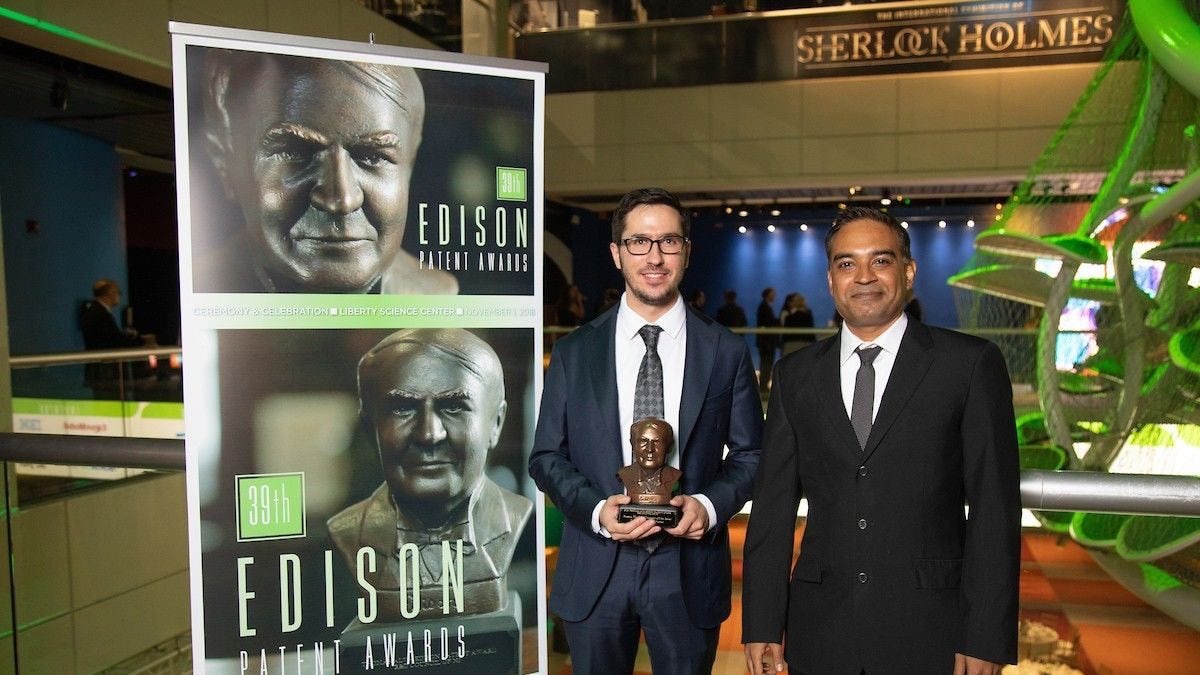 A new platform for helping novice investors get better at investing.

What do they all have in common? All began on the Stevens campus; all are successful startup companies making waves.

And all four trace back to guidance from the same Stevens faculty mentor.

Mukund Iyengar, a professor of electrical and computer engineering and founding Entrepreneur-in-Residence at the Stevens Venture Center, helped each venture's team get off the ground through an inspired combination of teaching and motivation.

Iyengar's influence is visible in a string of successful Stevens student-created startups, companies like Data Minded Solutions (since rebranded as Noteworth), iUbble, Savizar and Blink. The innovative iUbble browsing technology he developed with computer engineering student Kevin Barresi '16 M.Eng. '16 was so innovative it was awarded an Edison Patent Award in 2018 by the Research & Development Council of New Jersey.

"Mukund was instrumental in helping shape our initial vision," says Barresi, who later merged the company with FinTech Studios in Manhattan, where he is CTO. "He worked with me to transform an idea into a viable business."

Iyengar joined Stevens in 2012 after receiving a doctorate in computer engineering at the University of Central Florida, where he was awarded UCF's Presidential Doctoral Fellowship and performed research on internet live-streaming technologies.

After graduating with his Ph.D., Iyengar faced a choice: accept one of several job offers from Facebook, Cisco or Google, or pursue something new.

He chose a deep dive into entrepreneurship and a role at Stevens.

"I wanted to provide real solutions to real problems, and my definition for a real solution is creating products that are best judged directly by their target audience, rather than peer reviewers for research papers," he explains. "So I took a chance. I said I would give it one year."

He pursued numerous ideas during that one year— and every one, he says, failed.

"Primarily because I didn't have any background in this, and I was obsessed with ideas," he chuckles. "But there was value in that, too. I learned an enormous amount. At the end of the year, I found that my resolve and hunger for this had increased, not diminished."

Iyengar has since mentored and taught dozens of Stevens students — teaching skills like coding, data structure, algorithm development and business planning while also imparting his unique brand of entrepreneurial thinking. And it's working: Iyengar's students have already gone on to form companies with a net worth of $35 million and climbing.

How? He does it through a combination of structured and unstructured learning — drawing on case studies, mountains of entrepreneurship research, and business fundamentals — and inspiration.

"Part of my skill," he says, "seems to be identifying, inspiring and nurturing talent through mentorship and guidance to pick ideas and help shape the vision and mission of companies to come. Starting and growing a company is incredibly difficult; it's the ultimate education."

Even when a first venture doesn't work out, however, Iyengar reminds his students how they have developed patents and products and experienced the exhilarating, labor-intensive process of building a company from the ground up.

Many students go on to form successive, more successful startups. Some even pay Iyengar's lessons forward, by serving as mentors themselves: Barresi serves as a current entrepreneur-in-residence for the Venture Center, advising new generations of Stevens students working to transform ideas into business plans and working ventures. Noteworth founder Justin Williams frequently returns to campus to lecture on his business experiences. And so on.

In addition to his teaching and mentoring activities, Iyengar also created Stevens' annual HealthTech Hackathon in 2016. It's still going strong.

"Teams are required to come up with their ideas by the end of the very first hour," he explains, "and from there, it's just go-go-go for the rest of the competition."

Among the prize-winning technologies hatched in the hackathons to date: A depression-management tool, an early skin cancer-detection technology, an anxiety monitor, and an application that helps volunteers find opportunities to contribute to their local community.

In classes, Iyengar stresses that an overwhelming majority of successful computing ventures — companies like Facebook and Google, but countless others as well — began in the college or university environment.

"You can look it up," he says. "They almost always begin on a campus, during the university years. We teach students to identify some problem that is plaguing society, and to try to create products and services that are ten times better than what exists in the market at addressing that pain."

While success and financial reward can be motivating, Iyengar says, he finds his students also express a sincere desire to do good for society. Motivation from the heart, he says, often drives deeper commitment to nascent ventures — and eventual success.

"Money is one motivator, but it's a poor one," he concludes. "What I find is that those students who have a real passion for the core mission of a company they are creating are the ones who succeed. That sense of mission to help society address a real need turns out to be critical."