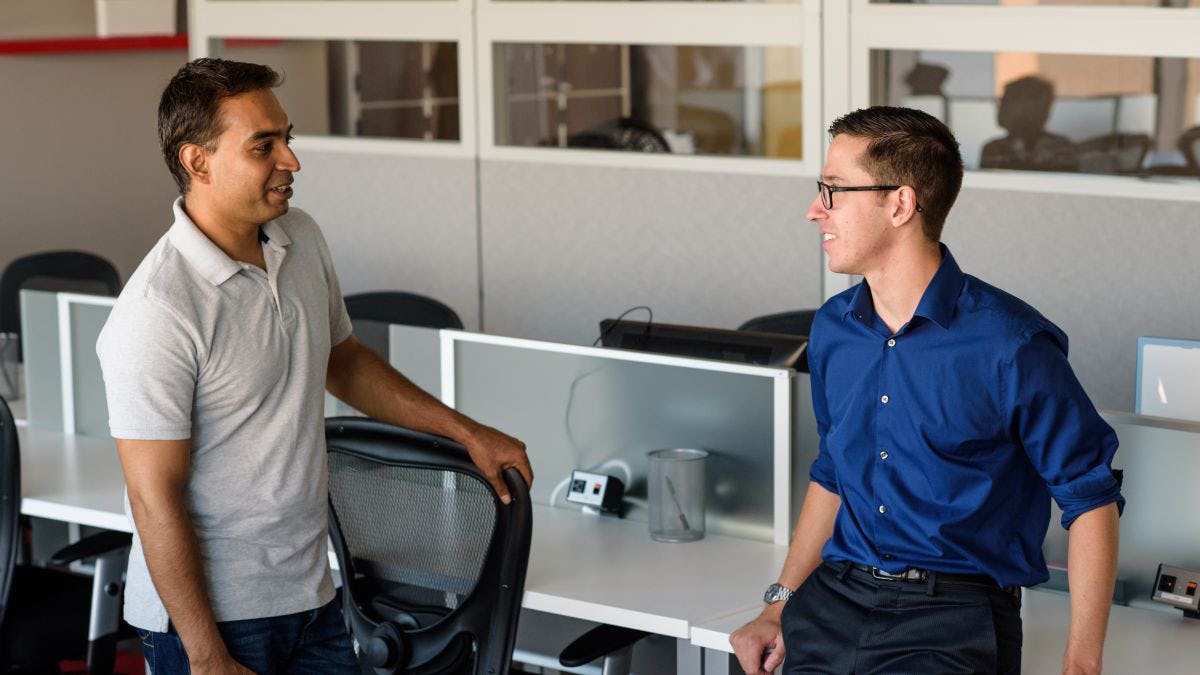 University’s tech incubator graduates one of its original members

A growing financial technology startup has become the first company nurtured by the Stevens Venture Center  to “graduate” and strike out on its own.

FinTech Studios, the successor firm to one of the SVC’s original member companies, has moved to offices near Manhattan’s World Trade Center after securing several rounds of investor capital and generating strong sales growth.

The move is a major milestone for both the company and the SVC, which was formed in 2016 to serve as an incubator for promising science- and technology-oriented business ideas developed by Stevens students and to assist faculty members whose research has commercial potential. There are currently 15 companies in the SVC in various stages of development.

“We are extremely proud of FinTech Studios’ success and the role we played in helping them turn their vision into a viable company,” said Adrienne Choma, director of the SVC. “This exactly why the SVC was founded — to help Stevens’ entrepreneurs learn how to turn their ideas into the next generation of game-changing, technology-oriented businesses.”

The SVC, located just off campus in a River Street office building, is designed to help fledgling companies by providing them with space, advice and expertise and to expose them to networking opportunities with potential investors, entrepreneurs and seasoned business people. Membership benefits include access to a network of established entrepreneurs-in-residence who can offer guidance and open doors in the worlds of business and financing. Students, faculty and staff can apply to be part of the center through the SVC’s website.

In addition, the SVC provides programs that build on the entrepreneurial focus that undergirds much of Stevens’ curriculum. The SVC brings business people to campus as part of a monthly speakers series, holds networking events and organizes “hackathons” — weekend-long gatherings in which participants brainstorm ideas and code applications to solve societal and business problems.

The company became part of the SVC after it acquired iUbble, an innovative web browser created by Kevin Barresi, a member of the Class of 2015. iUbble was among the SVC’s initial member companies when the center was created in 2016. Barresi became FinTech Studios' chief technology officer and worked on the company’s software products while it was housed in the SVC.

Jim Tousignant, FinTech Studios' chief executive officer, said the company benefited greatly from the environment and the connections provided by the SVC.

“My experience with the Stevens Venture Center has been consistently excellent, and our relationship with Stevens has been a huge part of what has helped FinTech Studios start and develop as a growing software and information business,” he said. “I greatly appreciated and enjoyed the opportunity to interact with Stevens Institute of Technology and the Stevens Venture Center, as well as the many great people within the Stevens community, including the administration, alumni, students and faculty.”

One of the SVC’s entrepreneurs-in-residence, Ray Thek, vice chairman of the technology practice at the New York law firm Lowenstein Sandler, provided valuable introductions to potential investors, which resulted in FinTech raising $1 million in seed capital from KEC Ventures in July.

FinTech Studios was also able to recruit another Stevens alumnus through its involvement with the SVC; Dylan Praul, a computer science master’s graduate, now serves as senior director of software engineering.

Because of its success, FinTech Studios is no longer dependent on an incubator to sustain its growth. It has 10 full-time employees and it has raised about $1.5 million in capital — $1.1 million of it in 2017 alone. It also saw its sales increase six-fold in 2017 over the previous year.

Its latest platform is used by thousands of Wall Street professionals to mine news, research, market data and analytics in real-time from millions of websites, blogs and research sources in 32 languages, Tousignant said.

Although FinTech Studios is leaving the nest, it will maintain ties to the SVC. Tousignant plans to stay on as an entrepreneur-in-residence to continue helping SVC companies.