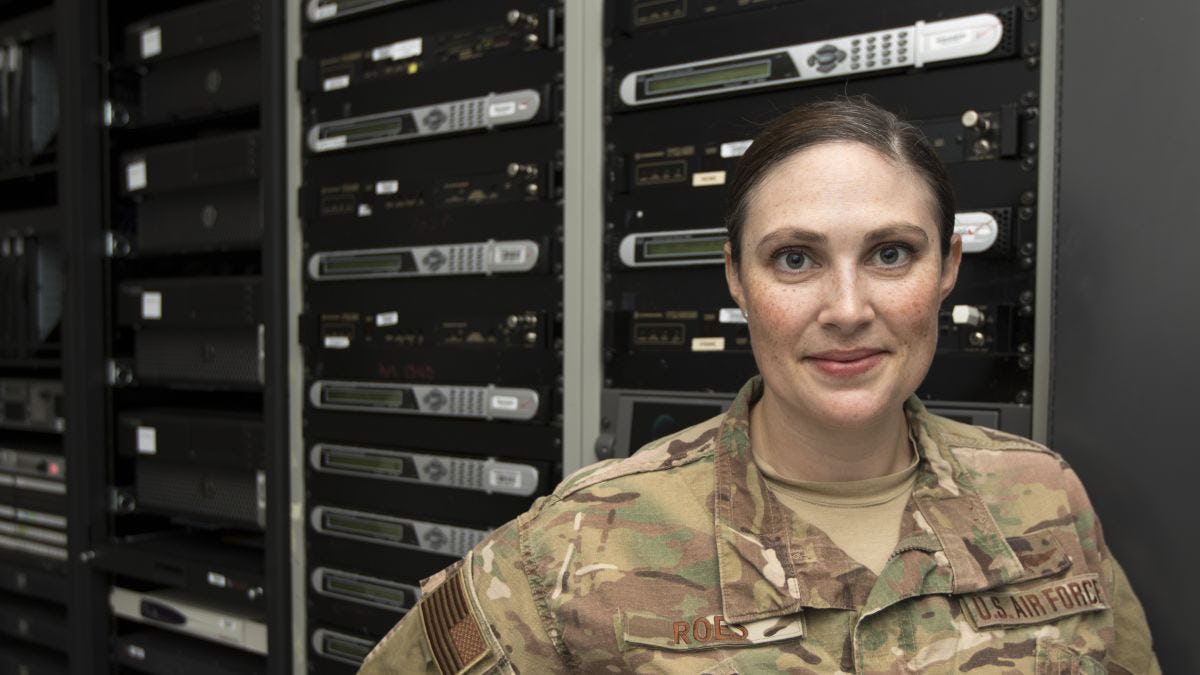 Major Kaitlyn Roes '08 (Photo courtesy of the Department of Defense)

Military officials huddled together in a war room, poring over real-time intelligence briefings beamed in from satellites. Airmen planning strategic maneuvers to thwart adversarial threats. Split-second decisions that could decide the fate of nations. Such vignettes sound like scenes from a summer blockbuster — but for Major Kaitlyn Roes ’08, it’s all in a day’s work.

As the director of operations for the Air Force’s 505th Communications Squadron, Roes leads a 53-person team charged with conducting realistic combat simulations. Roes and her team are stationed at Hurlburt Field on the Florida Panhandle, but advanced command and control communications systems enable officers to train remotely around the world. Technologies like these make it possible to virtually test tactics and weapons where they will be used rather than in labs, and safely train warfighters to respond to threats on their home turf.

Roes always knew she wanted to pursue a career in the military — her mother’s service as a Navy nurse strongly influenced her interest in the armed forces — but she never imagined that her role would be centered around communications. Curious and technically minded, she was interested in engineering.

“I’ve always been interested in figuring out how things work,” she says. When the time came for her to choose a college, she found Stevens almost accidentally through a lacrosse recruitment visit. The university’s combination of rigorous STEM (science, technology, engineering and mathematics)-focused academics and a respected athletics program made it an easy choice.

I came to Stevens as a shy little kid, but meeting a strong group of women who were also interested in technology was really the defining moment of my life.
Major Kaitlyn Roes '08

Roes cites several major influences that shaped her time at Stevens: “I found teamwork and friendship through lacrosse; sisterhood and leadership through Phi Sigma Sigma sorority; and hands-on learning in the biomedical engineering labs,” she reflects. Throughout her college career, Roes would also wake before dawn two days a week, reporting for duty with the Air Force ROTC (AFROTC) detachment at New Jersey Institute of Technology, which hosts cadets from Stevens and several other area schools.

Shortly before graduation, Roes and her AFROTC classmates were honored with a special ceremony announcing their future military placements. With her fingers crossed for an engineering position, she stepped up onto the stage. When she heard “communications and information,” she was surprised — the career field seemed vague and potentially mundane.

“I wondered if I’d ever have an opportunity to get out and work in the field,” she admits. Disappointment struck again a few months later when she learned that she would be reporting to Robins Air Force Base in Houston County, Georgia — almost three hours away from any major city.

As her assignment approached that fall, Roes was determined to keep an open mind. Her family organized a road trip to drop her off at the base and she soon began training with a team in tactical communication (tactical comms). She was pleasantly surprised by the hands-on nature of the role, setting up satellite dishes that would serve as communication hubs in remote locations. Connecting routers, switches and servers in the wilderness posed satisfying engineering questions, and working outside with a strong team brought back memories of the lacrosse field.

After three and a half years in Georgia, her tactical comms team was called to put their experience to the test in Bahrain, where they would dismantle an airfield communications station. The idea of deployment didn’t scare Roes; instead, she found the mission exhilarating — it was the chance she was looking for to get out in the field.

The five-month deployment led to her next assignment back in the States at Peterson Air Force Base in Colorado. Working with the Air Force Operational Test and Evaluation Center, she managed a unit tasked with operational testing of satellite ground stations for the Air Force, running tests to determine vulnerabilities in technologies and securing the network to combat outside manipulation.

Two more deployments followed: one to Afghanistan, where she was part of Resolute Support — a NATO-led mission to train, advise and assist the Afghan National Defense and Security Forces and institutions; and one to Korea, where she managed executive communications for leadership.

During the course of her ten-year career, Roes has been promoted four times — most recently to the rank of Major in 2018. When considering opportunities and compensation for women in the military versus women in civilian professions, she sees noteworthy differences.

“Workforce equality may actually be easier to achieve in the military because of its structured pay scale and promotion schedule,” she says. “As long as objectives are met, no two people in the same role and rank can be paid differently.”

In her current role, Roes keeps a regular Monday through Friday work schedule and enjoys weekends and personal time. She has maintained a tight-knit group of friends from Stevens, and visits Hoboken often to celebrate life’s milestones. Together, the group has returned to campus to face off with current student-athletes in alumni lacrosse games. In Florida, she enjoys her favorite sport from a different perspective, coaching the Niceville Eagles, a local middle school girl’s lacrosse team.

Although she’s charged with protecting national security, Roes finds that the hardest part of her job isn’t the work itself, but rather saying goodbye to the friends she’s made in each of her placements when it’s time to make a move.

“It’s about the people,” she says. Shared missions in unfamiliar places create deep bonds between those who take them on together, and Roes will always remember the first time she felt the power of camaraderie. “I came to Stevens as a shy little kid,” she recalls, “but meeting a strong group of women who were also interested in technology was really the defining moment of my life.”