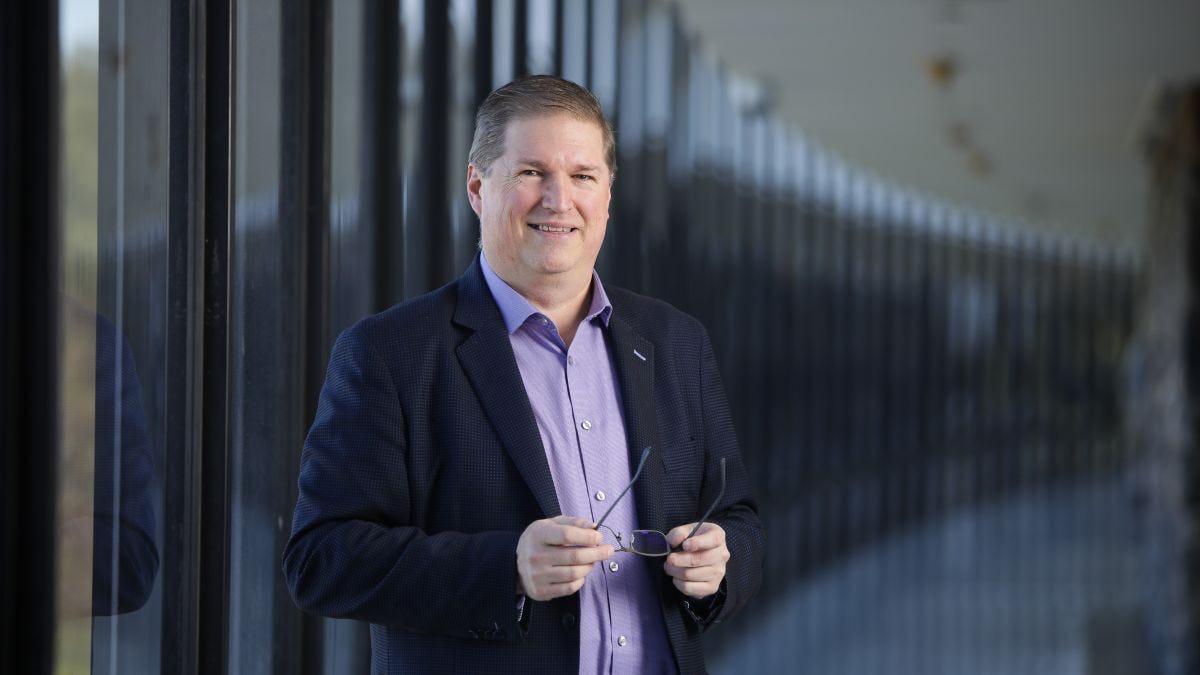 IBM Master Inventor Tim Dalton ’88 (yes, this is a real title) suggests that if you want to begin to grasp the staggering pace of technology, read a newspaper ad for Radio Shack from the late ’80s or early ’90s. You’ll see VCRs, cameras, tape recorders, telephones and calculators — all that now fit inside your cellphone, in the palm of your hand.

What will be the next “wow” innovation ten years from now? It’s hard to know. But Dalton insists that we will continue to be astounded. And as CTO, Science and Technology, with IBM Research, his job is to help deliver these future wonders to the world.

Dalton helps lead the future of technology from the Thomas J. Watson Research Center, IBM’s research headquarters in Yorktown Heights, New York, which is also home to IBM Watson — the supercomputer that burst into public consciousness in 2011 when it bested two Jeopardy! champions and is now an artificial intelligence tool used in areas from healthcare to business management to materials science.

During a visit last fall, Dalton leads several visitors down a corridor, eagerly opens a door and there is Watson — with its glass booth and banks of servers. He encourages stepping into the server room, which feels hot, and taking photos with the supercomputer. He is like a kid in a candy store — a researcher still filled with wonder.

It is Dalton’s job to try to predict the future of technology and how this will impact businesses and industry. He works with other team members in a leadership role focused on strategic and tactical research planning, meeting with clients around the world, making deals, and working within a broad range of areas within IBM, from business development and operations to finance and legal. Dalton’s primary focuses are leading research efforts in quantum computing and AI — with most of his time in quantum — in what have been identified by IBM as major research areas.

Dalton clearly loves his work and speaks with great enthusiasm and authority on any number of research topics. But he is also self-effacing — a busy single dad of four (his son, Tobias, is Stevens Class of 2021) who juggles parenthood with the demands of a career as a top technologist. He shows small glints of pride when he talks IBM and quantum. If someone had asked him five years ago when a viable quantum computer may be available, he and most researchers would have said in 30 years, he says. But in May 2016, IBM released the IBM Quantum Experience, and in 2017 IBM Q, the world’s first commercial quantum computer for scientific and business applications, available through the cloud.

He tells a story of how teams on the hardware and software sides were given a mission several years ago to get together and use their combined skills to make something out of a “small, noisy quantum computer.”

“We turned it from something decades away to something happening now,” he says. “We’re in the era of quantum ready.” He proudly reports that the open IBM Q Experience, available through the IBM Cloud, surpassed 100,000 users in mid-October.

Quantum — with its great ability to model systems such as molecules — has exciting, possible future applications. Dalton mentions antibiotic-resistant bacteria and the hope that, through quantum computing, that antibiotic materials and bacterial pathways could be modeled to combat disease. Or chemical pathways could be modeled through quantum computing to lead to more efficient processes of creating nitrogen-rich soil for farming.

Dalton, who joined IBM in 1998 after four years at Digital Equipment Corporation, started doing microelectronics research and, when probed, he mentions that he holds more than 300 patents and reached a level that qualified him at IBM for the title “Master Inventor.” He is quick to say that invention is very often a collaborative effort.

“I had the great fortune of working on interesting projects, in new areas, with great teams, where there’s an opportunity to invent,” he says. Probably his most recognizable invention is the technology inside the chips (low dielectric constant interconnects) that later went into both IBM Power and Z systems as well as the original Nintendo Wii, Xbox 360 and PlayStation 3 game systems.

When you visit his office — a windowless room (as all are at IBM Research headquarters) in a quiet corner that branches off from the lab’s library — you see that it is filled with a collection of high-tech memorabilia. There are computer wafers, memory chips, virtual reality goggles and various other devices, along with photos of his children and framed copies of a few of his patents. He hangs his Stevens and MIT diplomas (the latter where he earned his master’s and Ph.D. in chemical engineering) on a wall.

Dalton, who grew up in Keansburg, New Jersey, has fond memories of Castle Point, where he was a DJ with WCPR radio, did sound for the Jazz Band and Glee Club, played intramural sports, was a member of the Tau Beta Pi engineering honor society and graduated as his class’ valedictorian. He’s a true believer in a Stevens education.

“Stevens provided me with what I call a broad base; I think it was an important thing,” he says. “To me, it was a solid, underlying foundation.

“I learned over the course of my career…you have to reinvent yourself many times. Technology changes, the market changes rapidly, the things to work on change, and you have to be able to change with them.

“Having that broad, underlying foundation is very important — to be able to understand different people you work with, in different areas, to change as conditions change.”

When Dalton speaks about the future of technology — and its ability to solve intractable problems — he is visibly excited. There is the promise of quantum…and then there’s AI.

AI has actually existed for decades, but it was mostly an academic endeavor at best, he says. Then came Watson and that game show.

“What did Watson do? It changed people’s perception of AI,” Dalton says. “All of a sudden, you could do something with AI that you couldn’t do in some other way. That’s big. That kicked off a re-invigoration of AI.”

Now, everyone is thinking about AI. Companies are creating AI “shops,” just as they created IT departments several decades ago, he says. They know that they have to be knowledgeable of and ready to explore AI, though they may not know how yet.

“AI is the new IT,” Dalton says. “It is going to be driving innovation and investments in institutions this century.”

IBM’s AI business unit (IBM Watson) was created in 2014, and the IBM Watson Health Unit in 2015 as a particular focus. Dalton uses the examples of doctors who must read medical literature as a part of their work. Watson can read thousands more articles and help doctors keep up with the latest medical information, and in addition provide clinical decision support and help them make more informed diagnostic decisions.

“We’re not going to replace the doctor,” Dalton says. “We’re going to augment the capabilities of the doctor. The system can say, ‘I know that you think it’s this. But have you considered this?’

Watson has also had applications in materials science and in business, helping businesses with customer relationship management (CRM). It is allowing “trained professionals to go far beyond their training,” he says.

Dalton acknowledges the challenges of AI, particularly bias in the data that trains the AI system. He mentions an example of the biases of some bank officers and institutions in the decision-making process that has led to larger loan rejection rates for certain racial and ethnic groups.

But the optimist in Dalton shines through when he thinks about the potential of AI and science for social good.

He sees much hope for AI’s use to improve agriculture. Gathering massive amounts of weather data from satellites and ground systems, AI can do calculations that can lead to models that help improve weather predictions, and guide the optimal times for planting, harvesting and irrigation.

Another development that excites Dalton is an IBM fellowship program that focuses on using data science for social good. IBM has already demonstrated, working with nongovernmental organizations, how to better target villages in need in African countries by using an AI system that relies on satellite data and simple analytics to determine which villages have more thatched roof huts than metal roofed huts. Communities with thatched roof huts — often used by areas in most need — would receive priority for funding, with the greatest impact.

After more than 20 years with IBM and three decades as a researcher and research leader, Dalton is still deeply passionate about his work and mission, IBM, and the scientists and engineers he works with every day.

“I’m in a building with, like, a thousand of the smartest people in the world,” he says. “If you need to find someone who’s an expert in something, you can find them. I think that’s pretty unique.”